11 Incredible Places To Visit In Durban 2021 At Least Once 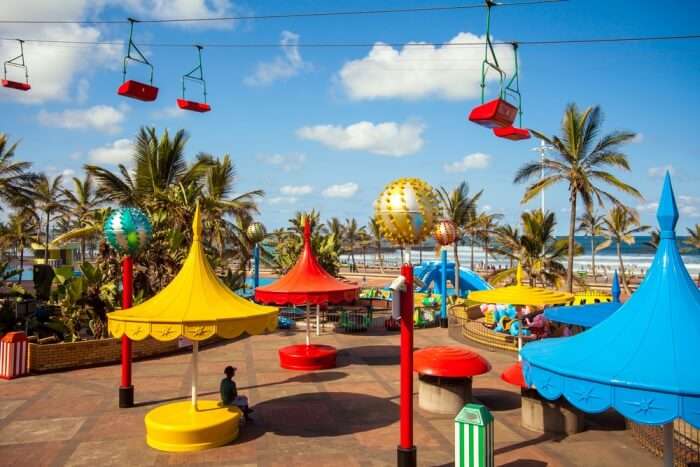 South Africa is a country blessed with an abundance of natural resources, a benevolent climate, and diversity in human population unseen in most countries of the world. One city that epitomizes everything symbolized by South Africa is the city of Durban! The city is blessed with a favorable climate all year round and plenty of natural resources to prosper throughout generations. It has also witnessed significant events in modern history that have played a massive role in shaping today’s world. Owing to all of this, it is no wonder that the below-mentioned places to visit in Durban are popular worldwide.

Top 11 Places To Visit In Durban

Here are some of the places to visit in Durban, South Africa that are thronged by tourists. You might want to check out these sites on a trip to the Rainbow Nation’s wonder city:

Designed initially as an amusement park with kids as the target audience, uShaka Marine World has evolved to become a marine park for the enjoyment of the whole family, even though it still pays attention to kids from 2 years to 12 years of age. It hosts the biggest jungle gym of South Africa along with several sandpits for the families to play in and relax at. For the movie-buffs, there is also a specialised movie stage area for viewing some of the best movies made for children around the world.

This is a sports ground that might not be counted among the most famous in the world, but it certainly has a fanatic following among the people following cricket, particularly in the Indian subcontinent and the Indian diaspora residing in South Africa. With a seating capacity of 25000, this is one of the largest stadia present in South Africa. Famed for hosting of International Test, Limited-Over International matches, matches of the ICC Cricket World Cups and World T20, this stadium also boasts the honour of being the finishing point for one of the world’s toughest ultra marathons – The Comrades Marathon.

The valley does not belong to a category of sites to stand and adore. Rather, it is more famous as a scenic driving route. At a 40-minute drive from Durban City, this valley is aptly named after the 1000 small hills it crosses on its way. The valley stays lush green all year round, making it one of the most scenic driveways. The Durban City Authority organises a dance show narration in English in association with the local tribes which is a must-see for all the tourists intending to visit Durban. Additionally, for the collector in you, there is an antique shop nearby for you to buy some mementoes as a remembrance of a great trip.

This newly-built stadium quickly made its way into the list of the most famous stadium around the world when it hosted the matches of the 2010 FIFA World Cup. Most famed for its all-weather playable pitch and its multi-utility, the stadium can hold over 62000 people in the audience, including provisions for the VVIPs. The stadium is an architectural marvel of modern times, with tourists dropping their jaws at the sight of the innovative roof covering that transforms this football stadium into an indoor stadium in 20 minutes and covers over 90% of the total ground.

The Golden Mile is the most famous of all the beachfront sites present in Durban, with the length totalling exactly a mile. Most frequently used by tourists from all over the world to sunbathe and relax on a holiday; you can also find many surfers here trying to master the art of surfing. The beachfront is protected all year round by lifeguards equipped with shark nets. The Mile also serves as a religious site for believers in the Sun, offering them enough space to perform their rituals as their tribute to the sun in accordance with the Hindu Mythology.

Out of all bird parks in South Africa, the Umgeni River Bird Park is touted as the best-cared park, with good reason. The park hosts some of the most exotic birds to be found in Africa with the birds not confined to cages, which is rare for any bird park in the world. The staff here is extremely knowledgeable about the birds in the park and their behaviour, which makes the park a desirable spot for naturalists and bird watchers to study the avian creatures at their leisure. For the amateurs, the park also organises a bird show which adds a wow factor to the bird park.

One of the best-kept safari parks in the Rainbow Nation, Phezulu Safari combines the adventure of a safari with the comforts of a stay at a five-star resort. The jungle trails are well curated for the safety and enjoyment of the tourists so you can relax completely with regards to the safety. The accommodation at the safari is top class, with special arrangements for stays by the families. There is also a cultural show presented by the local Zulus, which is always a sell-out with the crowds.

The Big Rush is a must visit if you visit Durban on a long trip hoping to satisfy the hunger for adventure. The adventure park offers tourists and patrons the best facilities for bungee jumping, hang-gliding and skydiving. The staff here is very knowledgeable and pay special attention to the younger adventure seekers and their safety. The park is ideal for a short holiday, so you should not miss a trip to this park at any cost.

One of the premier tourist destinations of South Africa, this site also serves as one of the main markets of the town. The market is characterised by the typical hustle and bustle of the city centre that is expected from a busy city like Durban. The market is most famous for its large collection of bags. However, the Victoria Street Market also deals in Chinese goods, brassware, antiques and cell phones. There are also shops present at the market which sell pieces of African artwork which are thronged by the tourists.

This park is the home of the ‘Sharks’, the premium rugby team of South Africa which has also given quite a good number of players to the Springboks. However, the stadium is more famous as the setting for the climax of the Oscar-winning movie Invictus. The stadium has a capacity of 52000, making it suitable for the use of the city-based Premier Soccer League football clubs too. Among other events, the stadium has played host to many world tours of famous artists, including Michael Jackson and Celine Dion. The next time you visit Durban, you might want to check out the Kings Park in anticipation of another world-famous concert.

Away from the bustling city centre, the Durban Botanic Gardens boast of some of the rarer plants that can be found on the African continent. While the Gardens serve as a local bio-hotspot and a focal point for naturalists and botanists, the garden staff also hosts concerts for the general public on a periodic basis. For the group travellers, the gardens also offer picnic packages including a consolidated tour covering the length and breadth of the garden.

Missing out on these sites is a folly you might not want to commit on your trip to South Africa. Durban promises a world of joys to the travellers on a holiday to the city. The next time you plan a visit to this wonderful city, make sure you bookmark some of these sites for your visit. You will most definitely have the time of your life.

Frequently Asked Questions About Places To Visit In Durban

Q. What can you do in Durban for free?

Q. Is Durban worth visiting?

A. Durban is not (yet) as popular as South African destinations like economically stimulated Cape Town and Johannesburg, making it a significantly cheaper city to live and holiday in.

Q. What can you do in Durban for cheap?

Q. How safe is Durban?

A. However, though it looks very modern and safe, it is not. It’s supposed to be one of the safest cities in South Africa, but unfortunately, even so, the crime rates aren’t low.

Q. What is Durban famous for?

Q. Is English spoken in Durban?

A. Yes, English is widely spoken in Durban. People will face no problem is communication when holidaying in Durban. Other than this, the locals also speak languages like Zulu, Afrikaans, and Xhosa.

Q. What is the best time to visit Durban?

A. The places have summers from December to March and also get some rainfall. The best time is actually from June to August when its winters and there is a nip in the air and seldom rains.

Q. Is Durban safe for tourists?

A. Durban is considered one of the safest places in South Africa but one actually needs to stay aware and alert while holidaying in this place. People are suggested to always be vigilant and take precautions.

Q. What are some of the must-eat dishes in Durban?

A. Some of the must-eat dishes in Durban are:
1. Bunny Chow
2. Fresh Sardines on Toast
3. Bombay Crush
4. Shisa Nyama and many more.

Q. What are some of the top things to try in Durban?

A. The top things that a tourist must do in Durban are:
1. Try Spicy Pineapple
2 .Walk on the Sky at Moses Mabhida Stadium
3. Take a tour of Beset
4. Visit the Gate Park gateway
5. Dine at Afro’s Chicken
6. Experience eating at The Chairman
7. Do Surfing

32 Hidden Places In Goa: Explore The Unexplored Side Of Goa In 2021

25 Best Places To Visit In Mcleodganj In 2021 That’ll Make You Fall In Love With This Gem!