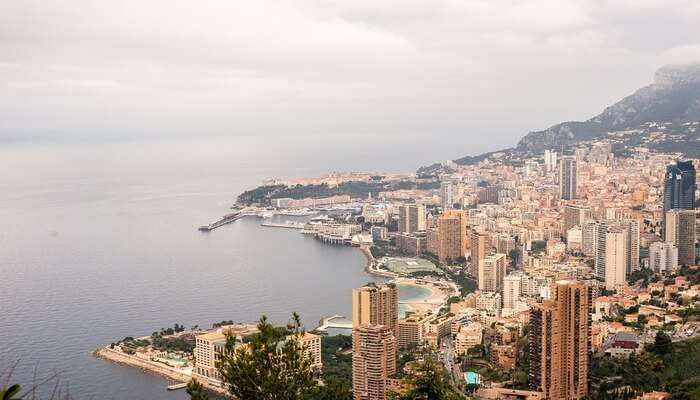 Monaco is a stunning and exotic European country. Situated on the French Riviera, this country is surrounded by France on one side and touches the Medditerranean sea on the other side. With an area of just above 2 sq. km, there are some gleaming places to visit in Monaco on your next trip to this destination. Monaco is among the top tourist destinations in Europe for the city’s charm, its glamour and tantalising beauty.

Abode of some of the richest people in Europe, the city is also a top destination for casino lovers from all over the world. Famous for its luxurious and opulent lifestyle, this fascinating country is also home to some incredible natural landscapes, brilliant architectural monuments and incredibly captivating tourist attractions.

Top 10 Places To Visit In Monaco

Full of some amazing attractions that will head you into blessing your time, here is the list of the top places to visit in Monaco:

This luxurious palace is the official address of the prince of Monaco.This palace has stood tall with an incredible history and heritage. The whole palace garden is alluring and beautiful. One of the best things to experience here is the breathtaking change of guard ceremony which happens every day. The whole place is very elegant and sparkling. The views from the palace are amazing and breathtaking. The palace has seen quite some action and attacks in its glorious past. This iconic place also houses a delightful garden and a wondrous church on its campus.

Must Read: 10 Monaco Festivals: Be A Part Of All The Fun And Festivity In 2019

This is a fascinating museum featuring small models of some of the prominent and historical significance and popular sea vessels and ships. The museum was opened for public in the early 1990s. The museum houses the models for world famous Titanic and Nimitz ships. Nimitz is one of the biggest military ships in the world.

There is an entry fee of Euro 12 for seeing this intriguing museum. There are models of the ship which are as old as the 16th century. The models are from the ships world over and it is a must visit place if sea ships are something that intrigue you. The museum houses more than 250 exhibits of ships here.

Suggested Read: Snorkeling In Monaco: 9 Best Spots Where You Can Swim Along The Fishes

Monaco Harbor is home to some of the most glamorous and glittering yachts you can find in the world. This harbor is surrounded by enchanting mountains and cliffs which makes the place amazingly beautiful and entrancing. Port De La Condamine which is what this harbor in Monaco called is also home to the private yachts of the prince of Monaco. This also houses some smashing yachts owned by the millionaires living in this rapturous country.

Suggested Read: What Makes Monaco In January An Irresistible Place To Take A Vacation To!

Casino Square is one of the most startling and shimmering places to visit in Monaco. This square is the go to place for the wealthiest in Monaco and the casino lovers from over the world. The square will greet you with sights of some of the most avant garde and luxurious cars you can find in the world including the top models from Rolls Royce, Bentley, Land Rover and many more. This sparkling place is home to few of the most popular casinos in the world – including Casino Monte Carlo. This is the place which also featured in James Bond and other Hollywood movies.

Suggested Read: Monaco In April: Your Personal Guide To Explore The Serene Country In Europe

Fort Antoine is a historic 18th century fort and an intriguing piece of architecture. This architectural marvel is situated near the sea shore and on a little elevation. The views of the city of Monaco and the sea from here are incredible and perfect for clicking photos. One would also be able to have glimpses of the famous F1 circuit of Monaco from this place. This old fort has now been converted into an open air theater. This theater hosts some awe inspiring theatrical performances in the summertime.

Gateway To Rock is a popular historical landmark in the city of Monaco. This place is popular among tourists for its incredible and heavenly scenic views of Monaco city and harbor. Situated on a mountain cliff this ravishing place is a must visit one. These glorious gateways were built in the 15th century and are an architectural marvel. The gateway leads to the famous palace of Monaco – the place du Palais.

This old village is still untouched by modern development and commercialisation and is home to the raw old beauty of this place. This unspoilt village is situated in a paradisiacal location surrounded by mountains and lush green natural beauty. The city views from Mont Agel are simply breathtaking and scintillating. The highest point of Mont Agel is more than 1,100 meters above sea level.

Suggested Read: Cafes In Monaco: Get Ready To Sink Your Teeth Into Buttered Croissants!

This is a huge, incredibly beautiful and awe-inspiring garden in Monaco. Extremely well maintained and beautifully created, this garden is unique and is simply ravishing. This huge garden is full of exotic flowers, fish and plants. Lush green Japanese style garden is one of the top tourist attractions here in this country. A perfect place for an evening stroll and relax in a riveting surroundings.

This is an exotic garden and an incredibly popular garden in Monaco. The garden is full of exotic plants and flora. The garden houses some incredible enthralling caves to explore. Delightful place full of picturesque and alluring spots to click your photographs amidst nature’s beauty. The views are amazing from this elevated garden. One would have riveting views of the enticing sea and shimmering Monte Carlo from the garden area.

Suggested Read: 8 Interesting Things To Do In Monaco On A 2020 Trip Here

This is a sparkling garden situated in Monaco Ville ward and overlooking the scintillating Mediterranean sea. You will find numerous species of exotic flowers and plants in this shimmering garden in Monaco. The garden is also full of beautiful natural landscapes and has amazing fountains, ethereal pools and some matchless views. One of the best places to wander and relax amidst the delightful surroundings.

Further Read: 8 Day Trips From Monaco To Make The Most Out Of A Trip To Europe

Monaco is an enthralling country which will awe inspire with its elegance and charisma. This exotic ethereal destination is a must visit location at least once in a life. This exquisite country has been a favourite location for some of the top Hollywood flicks and some of the richest people in Europe. There are some enticing places to visit in Monaco which will be highly gratifying. Plan your trip to this shimmering location right away.

Frequently Asked Questions About Places To Visit In Monaco

Q. Where is Monaco situated?

A. Monaco is situated in French Riviera in Western Europe.

Q. What is the currency used in Monaco?

A. Euro is the official currency in Monaco.

Q. Is Monaco the smallest country in the world?

A. Monaco is the world’s second smallest county – right after the Vatican city. Situated in a total area of only 202 hectares – the population of the country is less than 40 thousand.

Q. Is Monaco the richest country in the world?

Q. What makes Monaco so famous?

A. Monaco is famous for its incredible beauty and its opulence. This is an exotic location for tourists and one of the most popular destinations for Casino lovers in Europe.