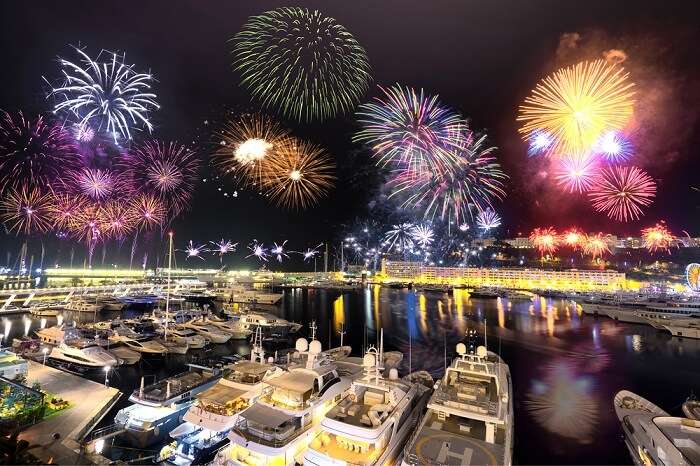 Although Monaco is a small city, it is a major tourist attraction. The city is well developed and is quite popular for its gambling industry. It is a great place to spend quality time with your friends and family. The locals are very friendly and welcome the tourists with great enthusiasm throughout the year. However, as they say, the ideal time to visit a place is when it is at the peak of its beauty. In case of Monaco, that time is the festival time. Monaco festivals are famous worldwide. From laughter to overwhelming emotions, from fun to danger, Monaco festivals are a perfect mixture of everything which cannot be missed.

Despite being a small city, Monaco hosts a number of festivals throughout the year. Monaco has a great cultural environment. It is a country of art loving people. Probably, that’s why Monaco hosts a lot of international film, music, television and theatre festivals every year. Apart from these, a lot of sports festivals and events are also organized with equal zeal. Thus, Monaco has something for everyone. Here, we have prepared an exhaustive list of the top festivals held in Monaco every year: 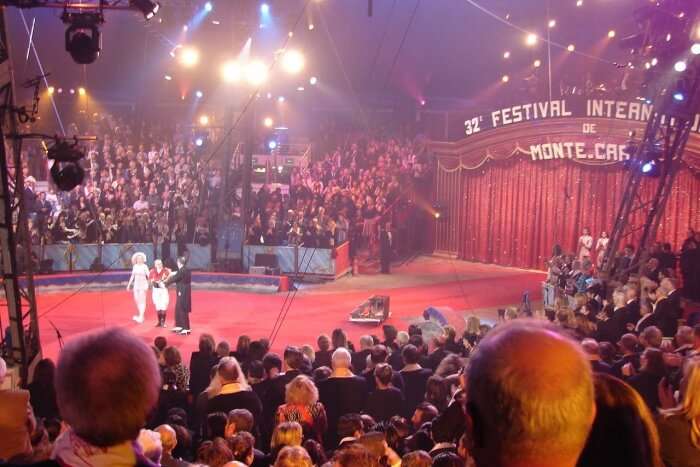 The International Circus Festival of Monte Carlo is one of the major events of Monaco, celebrated with great pomp and show every year. The festival is a prime tourist attraction and is being celebrated since 1974. Generally held in late January or early February, the festival mainly includes the distribution of awards for circus skills to the deserving candidates. Earlier, due to the permanent venue Chapiteau (circus tent) de Fontvieille being under construction, the festival used to take place in Monte Carlo. The festival makes sure that people enjoy a world-class circus show and has something for everyone. No wonder it is quite popular among the tourists.

7 Days In Spain: Witness The Splendid Sceneries Of The Second Largest European Country! 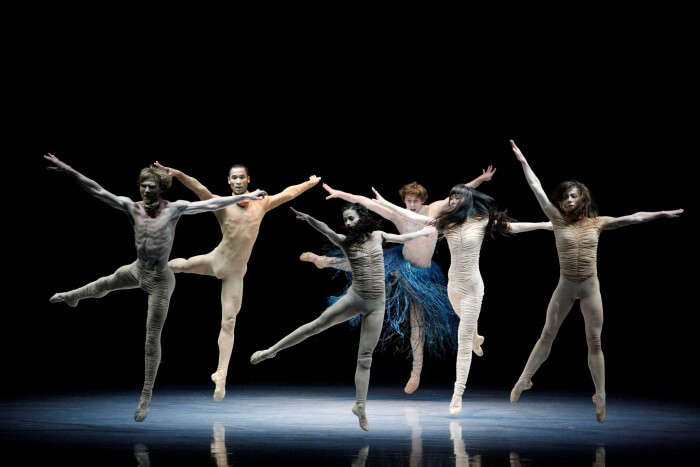 The Spring Arts Festival is a popular arts festival held in Monaco every year. Held in April, the festival lays a prime focus on music and dance related events. It is a blessing in disguise for art lovers and is attended by artists from all over the world. The festival is planned quite effectively every year and has a lot to offer. Renowned artists from all over the world display their expertise in music, dance, visual arts, and theatre through various acts and performances. The festival is held at various world-class venues throughout the city. As the festival is quite popular, people should buy the tickets in advance so as to avoid any inconvenience later.

Location: Various venues in Principality of Monaco
When: April 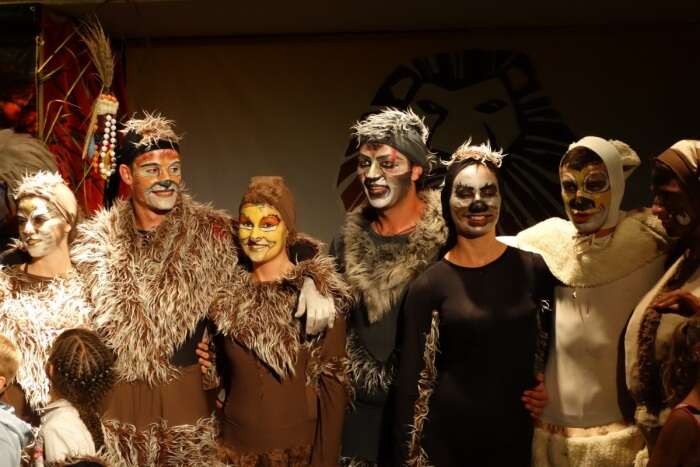 This is a premier theatre festival which is held in Monaco once every four years. The festival is held with an aim to encourage amateur and community theatre. Many budding artists throughout the world consider it as a major opportunity to showcase their talent to the world. Each country that participates in the festival is expected to perform in its native language. The organizing bodies of the festival namely Studio de Monaco and the International Association of Amateur Theatre take a lot of pain in coming up with some of the best theatre talents every year and the same can be seen in the festival.

Location: Principality of Monaco
When: Held every four years, last held in 2017

Paragliding in Austria: Head to these amazing destinations in the heart of europe! 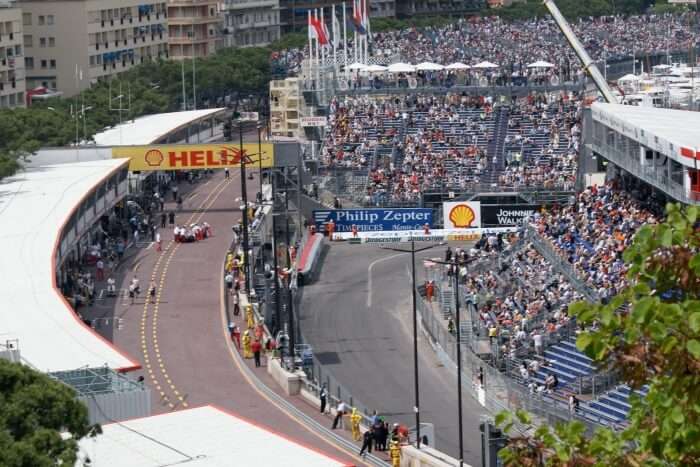 Sports lovers, where are you at? Monaco Grand Prix is waiting for you! The Monaco Grand Prix is a national sports competition held in Monaco every year. It is actively organized by Automobile Club de Monaco and is a competition of international importance. It is one of the most prestigious sports festivals in the world and is eagerly looked forward to by sports lover from all over the world.

Location: Circuit de Monaco
When: May Location: Monaco
When: Not fixed 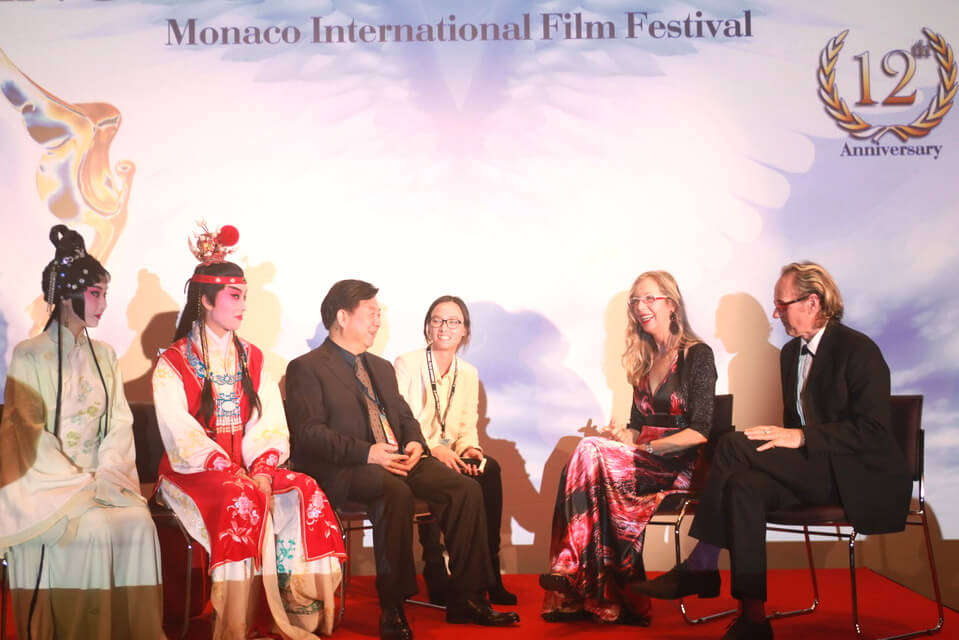 The Monaco Film Festival is a series of events organized once a year in Monte Carlo. Since 2006, the festival is being organized with great pomp and show year after year. The events aim at celebrating, encouraging and recognizing the music of the film along with the film itself. Thus, it is a unique kind of festival and is highly popular among the musical and film fraternity.

Location: Monte Carlo
When: May 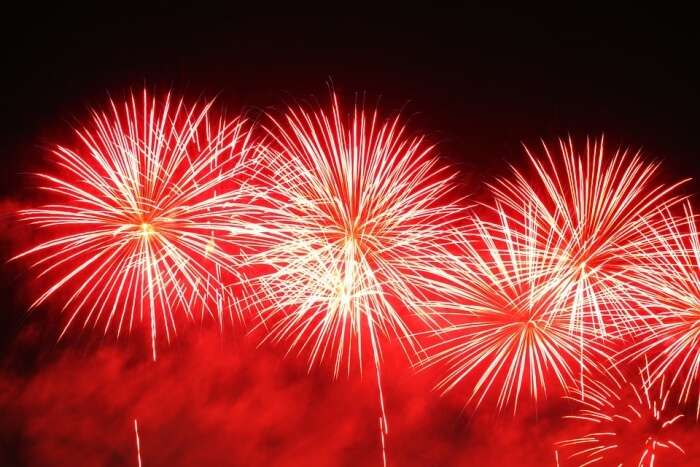 Monaco offers its visitors an excellent opportunity to witness jaw-dropping fireworks through the Monte Carlo International Fireworks Festival. Each round is expected to last for approximately 20 minutes and leaves the viewers in its awe. Not just that, an interesting fact about the fireworks is that a panel of jury members judges the fireworks. Thus, it is not just another showcase of fireworks; it is a competition of national importance and is something that the locals wait for throughout the year as they also get to vote for their favorite show online. You can say that it is one of the Monaco traditional festivals.

Location: Monaco
When: July or August

Museums In Austria: 8 Amazing Storehouse Of History And Art In The Heart Of Europe 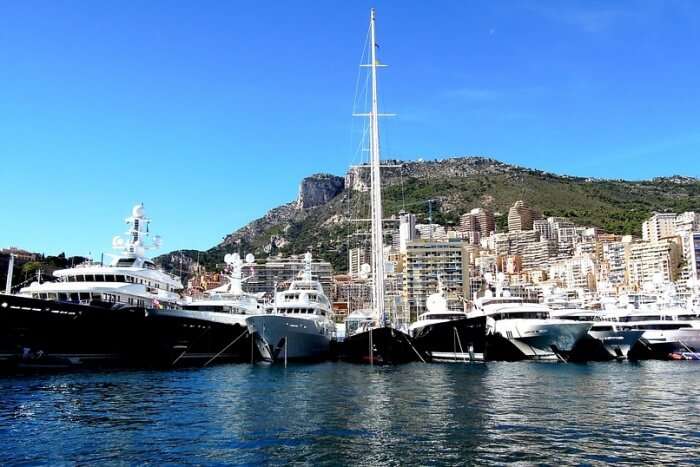 The Monaco Yacht Show is an annual festival held in Monaco. Launched in 1991, the festival is a four-day event and includes a lot of activities. Product presentations, press conferences, and other notable events witness attendance of more than 33000 people collectively. Informa is the official organizing body of the festival. If you are crazy about yachts or looking to buy one, then you should attend one of the annual trade festivals in Monaco. Get in touch with finest yacht designers and lay your eyes upon some of the world’s most luxurious yachts here. 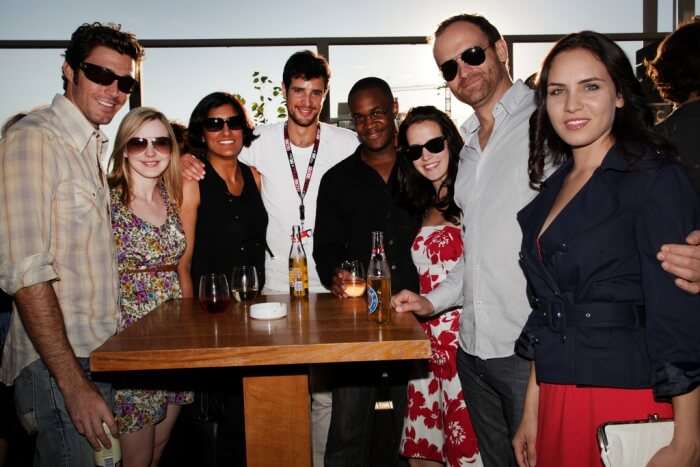 The International Emerging Film Talent Association established the International Emerging Talent Film Festival in 2007. The festival is celebrated with great pomp and show in Monaco every year three days before the Cannes Film Festival. The festival was started with a goal to identify and encourage emerging cinema talents across the globe. The festival is a complete entertainment package for cinema lovers and features special movie screenings, spotlights, documentaries and a lot of other activities.

Location: Monaco
When: Three days before the Cannes Film Festival 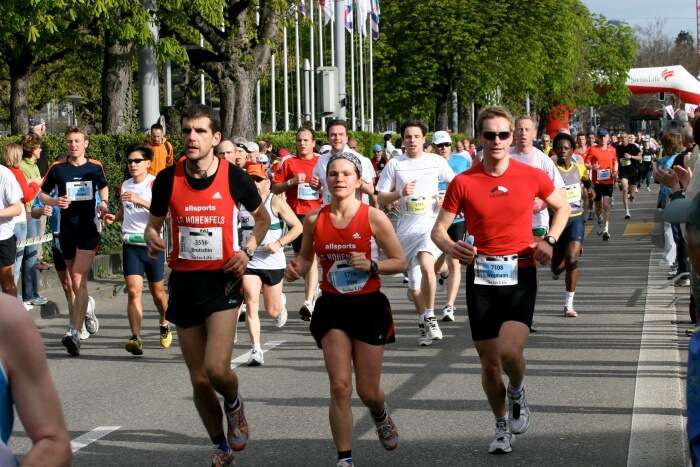 Yet another crucial sports festival of Monaco, Monaco International Marathon is a race spanning three nations – France, Italy, and Monaco. Not being on the major running circuit has hardly influenced the popularity of this event and it still sees 1000 to 2000 people attending it every year. If you love running and are a fitness enthusiast, then you should join this marathon on your trip to Monaco. Even if not, it would be fun to do such activity here.

Location: Monaco
When: Every year in November

What Makes Monaco In January An Irresistible Place To Take A Vacation To! 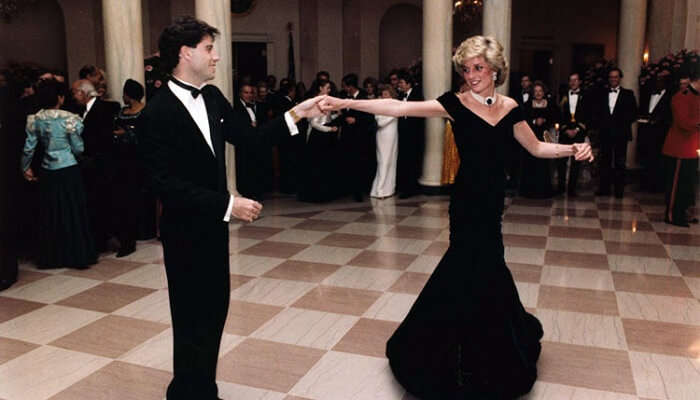 This annual festival is considered to be one of the most elegant and coveted fundraising events which happen during the month of March. Started off around the year of 1954 by Grace Kelly, this event raises funds to initiate a donation to the Princess Grace Foundation. With every year the time changes and the ball celebrates a different theme. Alongside this, the place is famous for the thousands of roses which are used to decorate the Salle des Etoiles venue.

Snorkeling In Monaco: 9 Best Spots Where You Can Swim Along The Fishes

12. Concerts At The Prince’s Palace 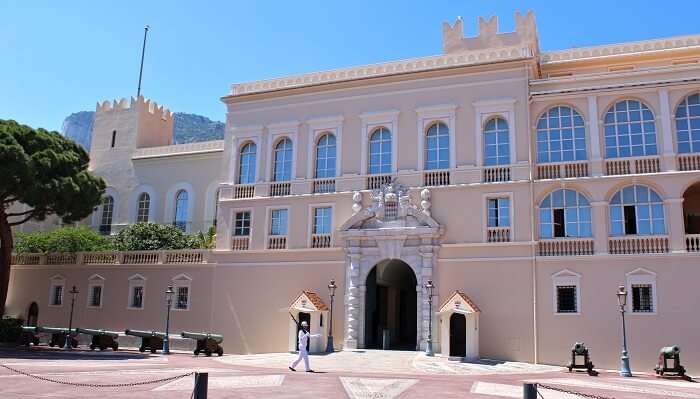 For the people who love to experience the royal touch, the outdoor concerts which happen outside the Prince’s Palace are something that cannot be missed. These concerts are held throughout the summer which was started by Prince Rainier III. This event is open to the public and the tickets are advised to be purchased in advance. This venue is quite breathtaking and to jazz, up the event Monte-Carlo Philharmonic Orchestra is there with its beautiful line-up. 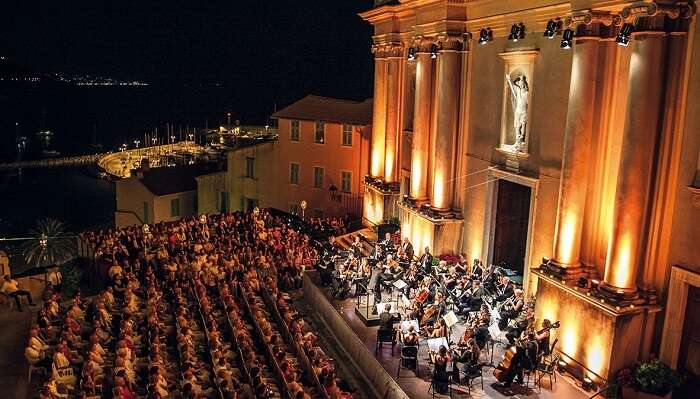 This festival came into existence during the year of 1950 and has been entertaining the audience since then. The festival boasts a baroque setting where classical music is played. The main highlight of the event is the big names in music which rocks the stage with their upbeat creations. This event is a perfect option for people who have a soft corner for music and wants to groove on the beats of classical band tunes.

Top 7 Wedding Venues In Monaco For An Extraordinary Celebratory Affair

This festival became the first event in the world where the sailing and motorboats were showcased from the past. And adding to this it was also a symbol to Yacht Club’s unwavering commitment to maritime. In the memory of the first powerboat meetings which used to happen in 1904, this festival brings together one harbour classic yachts, period motor-yachts and the vintage motorboats. In 2019, this festival paid a tribute to the American-built yachts and their designers by keeping an American theme.

Monaco In April: Your Personal Guide To Explore The Serene Country In Europe 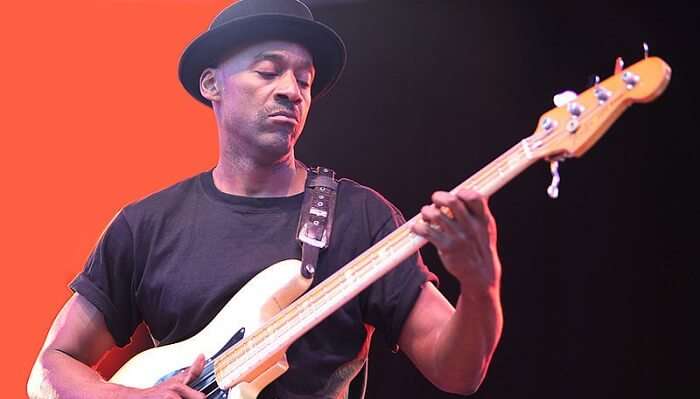 The Monte-Carlo Jazz Festival is one of the most prestigious and quite an intimate festival which is located inside the Casino de Monte-Carlo. This festival brings closer to some of the biggest jazz stars and also fresh talents. The sound of the jazz beats compliments the wonderful setting, and this place turned out to be a temple of music and art for more than a hundred years.

These were the top 10 Monaco festivals 2022 that you must not miss while planning your trip here. Monaco is a beautiful city and has something for everyone. Don’t be in a hurry to explore it all in one go! Take your time and make sure that you befriend a lot of locals on the way. Also, don’t forget to taste the local cuisine. Plan your vacation at Monaco with TravelTriangle and have a hassle-free vacay!

How is Christmas celebrated in Monaco?

The Monaco culture to celebrate Christmas with a round sweet bread sided with four to seven hazelnuts and an olive branch.

What is famous in Monaco?

Monaco is known for its abundant wealth, casinos and also fascinating events which are worth experiencing.

Which is the famous food in Monaco?

Barbagiuan is one of the famous food in Monaco which is also considered the national dish.

Do they celebrate Halloween in Monaco?

Yes, Halloween is celebrated in Monaco with much zeal like any other place around the world. Port Hercules is the most famous place to enjoy a Halloween night.

What is the national drink of Monaco?

Pastis is the most popular alcoholic drink in Monaco which is a blend of many local beers.