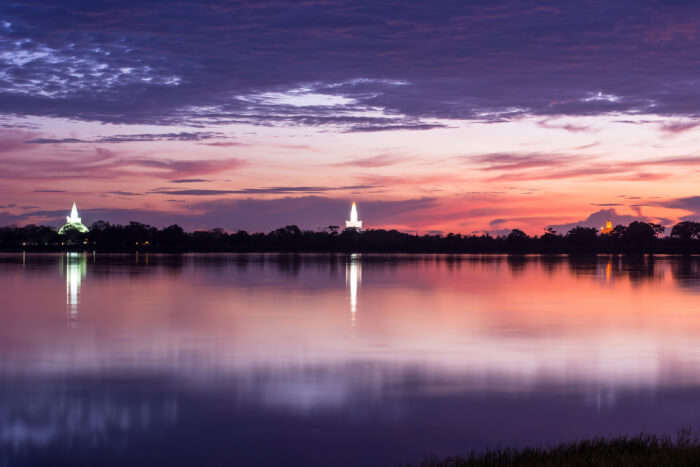 Located in the Northern Province of Sri Lanka, Vavuniya is a home to several world heritage sites recognized by UNESCO. The town is located about 215 km from Colombo – capital of Sri Lanka. Vavuniya has witnessed immense turmoil during the internal wars between the Sri Lankan army and the LTTE. In fact, the ravages of war still have a house in this small but bustling town. Thus, even though Vavuniya does not feature frequently on the list of travelers, it is a rich and enhancing experience for the tourists nevertheless.

With great connectivity through road and rail, Vavuniya acts as a pitstop for those traveling to Jaffna. Apart from the places to visit in Vavuniya, the local cuisine is also a crowd pleaser. If you wish to explore Sri Lanka right from its past to the present, then Vavuniya should definitely be included in your itinerary.

10 Best Places To Visit In Vavuniya

Vavuniya is the blast from Sri Lanka’s past. When in Vavuniya, you can visit the key milestones that denote the shifts and transformations taking place through the various eras in the Sri Lankan history. Given below are some of the most prominent Vavuniya tourist places you must visit on your vacation!

Also known as Madukanda Sri Dalada Viharaya, Madukanda Vihara is a historic Buddhist temple. The historic religious site is located within the Madukanda village, which is at a distance of 4 kilometres from Vavuniya. The Madukanda village and the sacred temple date back to at least 4th century AD.

As per the historians, during the journey of the holy Buddha’s tooth relic, Madukanda was the 4th resting point. It also happens to be the first location where the first Dalada Maligaya (House of the Sacred Tooth Relic) was founded. Pilgrims who intend to follow the original trail often stop at Madukanda Vihara for rest.

Madukanda Vihara is the relic house where the sacred tooth was venerated until the temple in Anuradhapura was built. One can witness fine craftsmanship in the form of intricate carvings made on the granite stepping stones. In addition to the temple, one can even visit the Stupa nearby which lacks the adornments as compared to the Vihara but is of equal historical value.

As per a local legend, the giant Nandimithra, a top ranking official in King Dutugamunu’s army was born here. Also, one can also visit the former residence, Madukanda Walawwa of a famous Sinhalese chieftain who lived there during the British reign.

Must Read: These 12 Places To Visit In Beruwala Will Make Your Trip To Sri Lanka Memorable

If religion fascinates you and you wish to see the impression of Hindu architecture on Sri Lanka, then you should consider visiting the Kandasamy Kovil. The temple’s vibrantly decorated facade will have you believe that you are traveling in South India. The faded, yet interesting temple gateway tower (gopuram) along with the idol decorated in gold and placed in the sanctum will leave architecture lovers delighted.

Murugan (or Lord Kartikeya) is the primary deity in this Hindu temple. In addition to being a place of worship, the Kandasamy Kovil temple also has a wedding hall where people can hold marriage ceremonies. The temple is often crowded during major Hindu festivals. Unfortunately, getting a good view of the temple can be marred by many obstacles and therefore you may have to walk through the entire temple complex to have a good look around.

The Archeological Museum of Vavuniya is founded, owned, and maintained by the Department of Archeology of Sri Lanka. Unlike its counterparts from the ancient cities, the museum happens to have a modest collection of several antiques. Since it is a a regional museum, it only holds items that were found in or around Vavuniya. If you are merely a tourist without much interest in the museum articles, you may enjoy resting in the shady yard of the Archeological Museum of Vavuniya.

On the other hand, history buffs will get excited on seeing the 4th century and 5th-century relics in the form of the pinched face terracotta figurines that are remnants of the Kilinochchi. The hexagonal chamber in the center contains 5th and 8th century Buddha statues made from Mannar limestone.

Furthermore, idols of Hindu goddesses and even some Christian elements like the baptismal font are also displayed here. Entry to the Archeological Museum of Vavuniya is free and do bear in mind that photography is allowed only after gaining prior permission.

Located in the heart of the town, the Grand Jummah Mosque towers over the busy market with its sparkling onion-shaped golden domes. The fresh aqua tinted tiles decorating the exteriors make the creation stand out remarkably, especially considering that most traditional mosques are white in color.

It is a major place of worship for the Muslims. The heart of Islam witnesses a large amount of activity of all those wishing to practice their faith.

St. Anthony’s Church is located on the Horowpotana road in Vavuniya. Although the construction of the church is rather plain, the stunning view of the lake accentuates the beauty in its simplicity. The Church is beautifully decorated during Christmas and New Year.

Image Source
Nature lovers can relax and enjoy the true bounties of Mother Earth in the Kaludiya Pokuna Forest. The lush forest houses an array of diverse species that are non-endemic and endemic to Sri Lanka. Despite the presence of a human settlement around the forest, the woodland happens to be untouched by man-made activities.

Primates, especially the purple-faced langoor and the tufted grey langoor, can be primarily found here. Trees having high timber value are also seen flourishing here without any human interference. Apart from the thriving flora and fauna, one will also stumble upon ancient ruins and remains of Kaludiya Pokuna.

Isinbassagala is an offbeat tourist location that is about 21.4 kilometres away from the center of Vavuniya. Perched on a hill, the grand Stupa and the Buddha temple offer a panoramic view of the rolling landscapes available all around. One can see giant statues of King Devanampiyatissa and Lord Buddha along with the Bodhi tree.
This temple was commissioned by the King Devanampiyatissa and the original structure has been renovated and repaired in the 20th century.

In addition to the temple remains, a cobra-carved stone (Naga Gala) and footprints of Lord Buddha were also discovered during the excavations at this site. These discoveries point out the different epochs of time in Sri Lankan history. Before the doctrine of Buddha was heavily practised, Nagas (Cobra) were the prime deity.

Suggested Read: Why You Should Visit Nilaveli Beach – A Place Of Bright Sunlight In Sri Lanka

Image Source
The Mihintale Peaks are located at a distance of about 48 kilometres from Vavuniya. It is a part of Anuradhapura, which forms the religious center of Sri Lanka. The Mihintale mountain peak is known to be the ‘Cradle of Buddhism’ as the religion took roots from here.

In Sinhalese, Minitale stands for “the plateau of Mahinda.” It is said that Mihinda (or Mahendra) the son of the Mauryan emperor Ashoka, first landed at Mihintale. It is from here that the son carried out his father’s order of spreading Buddhism on Sri Lankan soil.

At the foothills of the Mihintale peak, one can visit the oldest hospital in the world, which is locally known as Vedahala. Along the Mihintale peaks, there are many other interesting places such as the Kantaka Chetiya, Ambasthala Dagaba, Mihindu Guhawa, Aradhana Gala and three ponds, namely, Kaludiya Pokuna, Naga Pokuna, and Simha Pokuna. One has to climb exactly 1840 steps cut through rocks to reach the Maha Stupa of Mihintale.

In the months of June, Poson Poya is celebrated at this site, which results in a great inflow of tourists and pilgrims from all over. The festival marks the birth of Buddhism and the arrival of Mahinda.

Image Source
The Jethawanaramaya Stupa once touched a height of a whopping 400 feet and was considered to be the tallest monument in the world rivaled only by the Egyptian pyramids. However, time took its toll on the Stupa and while it may no longer be the tallest, it continues to be a wonder-inducing work of architecture.

The gorgeous stupa displays the excellent engineering techniques employed in erecting the monument. It is largely built of bricks is the largest such construction in the world. The Jethawanaramaya Stupa was built by King Mahasena and it is believed that the King lay the foundation to mark the final resting place of Mahinda.

Later, it was King Parakramabahu who renovated the ruins to reinstate the Stupa to its former glory although the 400-foot high stupa was diminished to a mere 250 feet in height.

Suggested Read: 10 Best Places To Visit In Gampola For Exploring This Hidden Gem In Sri Lanka

Image Source
One will have to travel about 75 kilometres from Vavuniya to reach the Wasgamuwa National Park located in Polonnaruwa district but it will be totally worth the effort. The natural reserve of Wasgamuwa National Park harbors untamed wildlife and you can view herds of buffaloes and elephants freely roaming around the vicinity.

Considering that the influx of tourists is pretty slim at the Wasgamuwa National Park, the region is never crowded. Owing to the less commercialization, visitors can truly enjoy a genuine safari visit.

Further Read: Why You Should Visit Nilaveli Beach – A Place Of Bright Sunlight In Sri Lanka

On one hand, you can easily catch a glimpse of the mongoose, deer, and alligators but getting to see the sloth bear or leopard is an experience only a rare few have undergone. The wild elephants of Sri Lanka are also seen wandering in herds in their natural environment. If you really wish to disconnect from the outer world and spend some time connecting with nature’s creation then plan your vacation in Sri Lanka and consider most of the above-mentioned places to visit in Vavuniya!