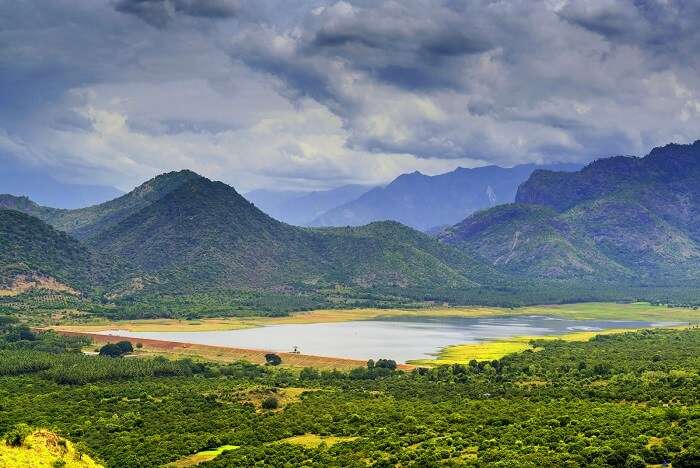 ‘God’s own country’ Kerala has many amazing destinations that will satisfy the traveler in you. From the beaches of Kochi to the hills of Munnar, the variety of geography in the tiny state can amaze anyone! But the excitement and thrill of holidaying don’t stop at the borders of Kerala, it extends right into Karnataka and Tamil Nadu with their wealth of cultural and historical destinations. These extraordinary places to visit near Kerala can easily be covered on a trip to Kerala, even on a weekend vacation.

Here are the top ten:

1. Madikeri – A scenic getaway to the land of Coffee

Suggested Read: 10 Best Hotels In Madikeri For A Perfect Getaway In The Hilly Paradise

Coffee plantations, scenic highways through hills and waterfalls, Madikeri is truly a nature’s paradise. The town is the district headquarters of Coorg and is accessible to all the popular destinations in the region. This makes it one of the best places to visit near Wayanad Kerala. In fact, many travelers make Madikeri their pit stop on their way to Kerala, while traveling from Bangalore. You can explore the natural beauty of Coorg through various activities like plantation walks, trekking, camping, and even river rafting.

2. Mysuru – A peek into the royal heritage of Karnataka

The regal and imposing palace of the Wodeyars has become the icon of Mysore. One of the biggest cities in Karnataka, it has a rich culture and history. The erstwhile kingdom of Wodeyar dynasty, the city is among the best places to visit near Wayanad Kerala for an enriching holiday, especially for families with children. Explore the Mysore Palace, shop for Mysore Silk Sarees, and binge on the sweet Mysore Pak, there are a lot of unique things to check off your bucket list in Mysore!

3. Kodaikanal – A visit to the Princess of the hill stations

Suggested Read: Off To Kodaikanal? Here’s A List Of 12 Places You Must Not Skip

Nestled in the Palani Hills at a chilling height of 7,000 ft, Kodaikanal is an escape from the heat of the plains. The hill station made popular by the British has been a favourite among tourists who enjoy the fresh mountain air and the picturesque landscapes. It is one of the places to visit near Thekkady Kerala to add the element of a mountain holiday to your Kerala itinerary. A contrast to the thick rainforests of Thekkady, the pine hills of Kodaikanal offer fantastic locations to relax and indulge in photography!

4. Pollachi – A gateway to the Western Ghats

Pollachi is an unassuming town in the state of Tamil Nadu but provides a gateway to the most pristine forests and hills of the Western Ghats. Pollachi is the starting point for access to Anamalai Hills and its many sanctuaries. Even the water coming in from the foothills of Annamalai create dams that are spectacular to see and serve as great picnic spots. This makes it one of the best places to visit near Guruvayur Kerala.

5. Madurai – A journey to the grand temples of South India

Suggested Read: 10 Best Places To Visit In Madurai For A Spiritual Journey Back In Time

On the banks of River Vaigai lies the ancient city of Madurai. With a history dating back to 300 BC it has been ruled by several kingdoms including the illustrious Pandyas, Cholas, Vijayanagara Empire and eventually the British. Each of these rulers has contributed vastly to the city but the most important attraction remains the magnificent Madurai Meenakshi temple, which dates back to the 14th century. One of the best places to visit near Kottayam Kerala, it has the right attractions for a memorable family vacation.

6. Kanyakumari – A trip to the southernmost tip of India

The southernmost tip of India, Kanyakumari has become a major tourist destination. It is not only the meeting point of the three seas of India – Indian Ocean, Arabian Sea, and the Bay of Bengal – but also where the Eastern and Western coastal plains meet. The city has mythological, religious and cultural significance and is one of the easiest places to visit near Kovalam Kerala. Don’t miss the legendary sunset at the tip of India from here!

7. Coimbatore – A visit to the Manchester of India

Suggested Read: 15 Ultimate Things To Do In Coimbatore On An Epic Trip To India’s Manchester City In South!

The industrial city of Coimbatore is famous for its textile production today, but it was always a trade destination even way back to the ancient Romans. An emerging metropolis, it is one of the best places to visit outside Kerala. Visitors often stop at Coimbatore to visit the nearby Palakkad and before heading on to the beach destination of Cherai and Kochi. It features among the top places to visit near Cherai Kerala primarily for its access to the rest of the country.

8. Mangalore – An escape to the coastal wonders of Karnataka

Karnataka has some of the best coastal destinations after Kerala and Mangalore tops those places to visit near Kerala border. Mangalore is a major port city of Karnataka and offers access to many smaller towns that are popular tourist destinations like Udupi, Manipal, Agumbe, and the pious temple town of Dharmasthala.

9. Shravanabelagola – An exploration of Jain heritage

The glorious Gomateshwara Bahubali Statue has become synonymous with the small town of Shravanabelagola. The destination is an important tirtha or pilgrimage site of Jains and is among the popular places to visit near Kerala to gain an insight into the rich heritage of India. The town is also popular because of its proximity to other historical towns like Hassan, Halebidu, and Belur which has spectacular temples dating back to the Hoysala Empire.

A popular destination thanks to the hundreds of Bollywood movies shot here, Ooty or Ootacamund has become a favourite honeymoon destination for a generation of Indians. The hill station retains its charm and is ideal for couples seeking a weekend holiday or honeymoon. With a variety of activities to indulge in, Ooty is among the most popular places to visit near Kerala.

Further Read: Kerala In Summer: 10 Serene And Scintillating Places To Visit In This Heaven

There you go! We hope we’ve given you plenty of awesome places to visit near Kerala for your next Kerala trip. Book a trip to Kerala with TravelTriangle and explore all these incredible holiday destinations.

Frequently Asked Questions About Places To Visit Near Kerala

Q. Which is the best time to go to Kerala?

A. June to August as well as between December to February is the best time of the year to enjoy pleasant weather and breathtaking scenery in Kerela.

Q. Which is the best place for a one day trip in Kerala?

A. Some of the most amazing places to explore near Kerela in one day are:
1. Madikeri
2. Mysuru
3. Kodaikanal
4. Kanyakumari

Q. Which is the most beautiful place in Kerala?

A. A few of the best places to visit in Kerala with beautiful views are:
1. Alleppey – The Backwater Hot Spot
2. Munnar – Perfect For A Romantic Honeymoon
3. Kumarakom – One Of The Most Tranquil Places
4. Wayanad – The Land Of Heavenly Trails
5. Thekkady – For The Love Of Wildlife
6. Kovalam – For Some Beach Fun

Q. Is Kerala worth visiting?

Q. How many days should you spend in Kerala?

A. Ideally, 4-5 days will be quite sufficient to explore all the popular tourist attractions in Kerela. However, if you wish to explore nearby places such as Munnar, or Allepey, you will require more than a week.

Q. Which is the best time to visit Madikeri waterfall?

A. The best time to visit Madikeri is during the monsoon which is between July-September. It is the time when there is maximum water in the waterfall and you can see it in its full glory.

A. Yes. Swimming is definitely allowed in the beautiful lake of Kondikonal. A few other activities that you can enjoy near this beautiful manmade lake are boating, fishing and horse riding.

Q. Are there beaches in Mangalore?

A. Yes. Mangalore is studded with a number of most amazing beaches such as
1. Panambur Beach
2. Tannirbhavi Beach
3. Someshwara Beach
4. Ullal Beach
5. Surathkal Beach
6. Sasihithlu Beach

5 Gorgeous Waterfalls Near Wayanad That Will Make You Fall In Love With This City!