5 Best Places To Visit Near Northshore: A Subzone Of Punggol In Singapore 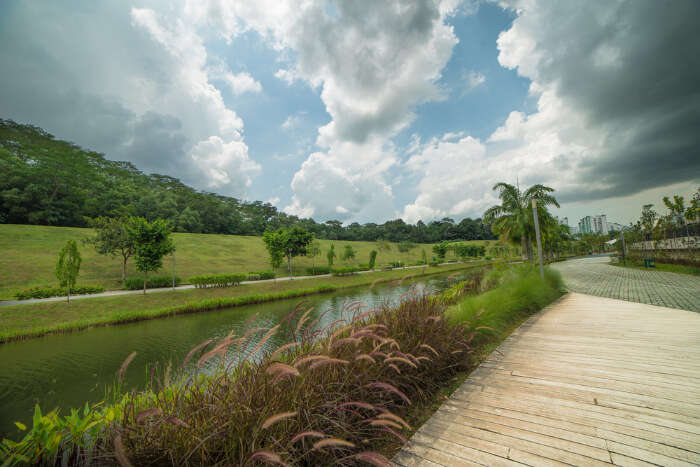 Ponggol which is a new town planning area located on the Tanjong Punggol peninsula. Situated on the North-Eastern Region of Singapore, Punggol is divided into 7 subzones. The Punggol Northshore is one of those new waterfront housing districts or subzones in Punggol. The other 6 subzones include Coney Island, Matilda, Punggol Canal, Punggol Field, Punggol Town Centre, and Waterway East. The Punggol Northshore is a fast-growing zone of the district with many places to visit near Northshore that attract tourists who visit the Punggol region.

The town of Punggol shares its borders with Sengkang on the south. It also shares borders with the Seletar planning area on the west and Pasir Ris on the east. In 1996, Punggol 21 initiative decided that the Punggol area would be turned into a new residential town. And in 1998, the development of the town was initiated. But the development plan could not be implemented properly because of the Asian financial crisis in 1997. The crisis had resulted in heavy financial issues within the construction industry in 2003. Later in 2007, a new development plan was initiated, known as the Punggol 21-plus plan. According to this new initiative, the Punggol area was to be redeveloped into a waterfront town.

Punggol’s history dates back to hundreds of years. It is believed that Punggol region had existed 200 years ago, even before Singapore was founded by Sir Stamford Raffles. The Punggol settlement is said to be one of the oldest settlements in the country. Located near the Punggol Jetty, this had been a well-established rural district that had farmhouses and farm structure too. The early occupants of this region were the Chinese immigrants had settled here in the mid 19th century onwards. Their livelihood was based on plantation and farming, majorly rubber plantations. Punggol has an amalgamation of people from various ethnicities and religion.

Punggol Plaza, Waterway Point, and Oasis Terraces are some of the commercial facilities available in Punggol. The recreational places in Punggol include Punggol Waterway Park and Safra Punggol Clubhouse. This place also has some popular religious buildings including the Masjid Al Islah and Church of the Transfiguration. The Punggol LRT Line (East) and Punggol MRT station are the 2 rail stations in the region that connects it with other parts of Singapore.

Places To Visit Near Northshore

Being located in a prominent place in Singapore, the Punggol region, the new town planning area and one of the subzones of Punggol, the Northshore has many opportunities to offer to its visitors. There are many touristy places to visit near Northshore, so make sure you explore all of them on your next visit to Singapore:

Image Source
Situated in one corner of the island of Pulau Ubin, Chek Jawa is a beautiful natural reserve in Singapore. This 100 hectare wetlands is teeming with wildlife and mangrove vegetation. To reach to Pulau Ubin, you will need to catch a ferry and then you can rent a bicycle or hire a van to go the place. You can go to the Chek Jawa Visitor Center to learn more about this wetland habitat. There are also many guided tours available that will take on exploration of the region.

Pasir Ris is a beach park in the central province of Singapore. There is a large marine pond in the park, where you can go fishing, the park is full of native trees and shrubs and flowering plants making it a perfect spot in Pulau Ubin for camping and picnics.

4. Gardens By The Bay

Gardens by the Bay is a nature park which is located just next to the Marina Reservoir. Spread across 101 hectares of land, this outdoor garden offers a great horticulture experience to the visitors. The garden architecture follows that of the minimalist Japanese Zen gardens. Here in Gardens by the Bay, visitors can experience a relaxing respite away from the hustle of the city life.

Botanic Gardens is located in Central Province of Singapore and about a five minutes’ drive away from the Orchard Road. This place is the first UNESCO heritage site in Singapore and the garden is home to many tropical botanical flora. There entire botanical garden consists of many small gardens including the National Orchid Garden, Healing Garden and Bonsai Garden. There is a Heritage museum inside the garden along with a library dedicated to Botany and Horticulture study. This garden ranks third among Asia’s tourist attraction site. The Orchid Garden part has been the forefront for study of Orchids and its cultivation.

Singapore is a destination that opens a plethora of opportunities to its guests. If you wish to see the places to visit near Northshore then you must plan a visit to Singapore with your family and friends. Though Singapore is one of those destinations which can be visited throughout the year, the peak season is just round the corner.