All About Ponte Vecchio Bridge: The Pride Of Florence 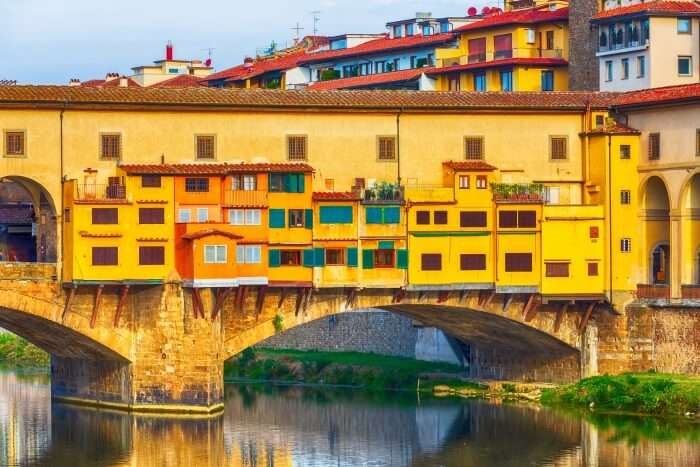 Florence is one of the oldest and most beautiful cities of the Tuscany region in Italy with a noteworthy historical background. The city is replete with ancient monuments, heritage sites, old bridges and many other antique landmarks, one of the most prominent ones being the Ponte Vecchio Bridge. Located on the banks Arno river, it is one of the many bridges in the beautiful city of Florence. Spanning the narrow most point of the Vecchio river, is Ponte Vecchio, a short but one of the most important bridges of Florence, which links the Pitti Palace to Piazza Republica along with Piazza Duomo. 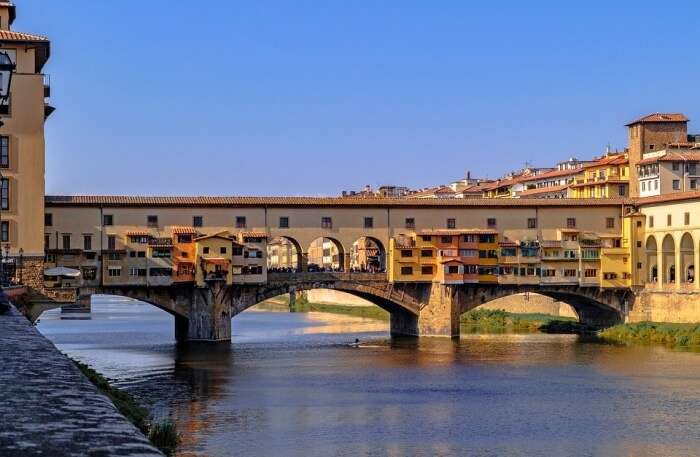 It had been resurrected many times, after being ruined by the floods time and again. This stone segmental arch bridge with closed spandrel comprises of three arches with segments, wherein the area of the middle arch is 98ft.(30metres), and the other two secondary ones on either side span 89ft. (27metres) each. It is constructed such that the span to rise ratio is 5:1, while the rise of this span is anything between 11’6” to 14’6” (3.5 to 4.5meters).

It has a total of four towers that worked as a defensive mechanism in the past however Torr Dei Mannelli is the only one that is functional now. It was then positioned in the southeast corner of this bridge. 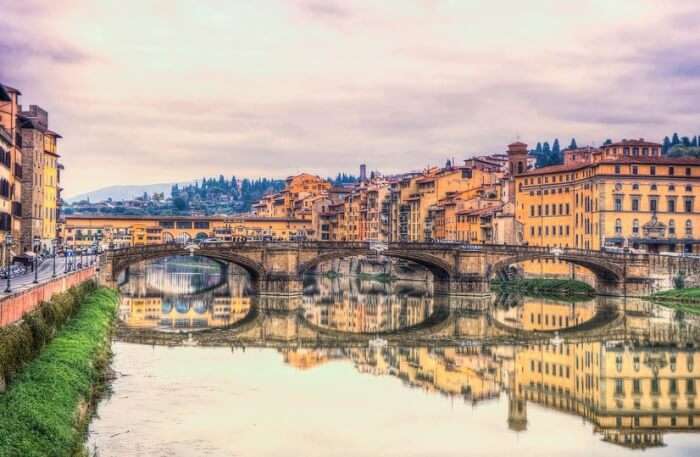 Ponte De Vecchio is one of the antique bridges of Florence that was built over the Arno river, close to the roman crossing, in the Roman era, in 996. It was the only bridge to have retained its individuality until 1218 as no other bridge was built until then. Initially it was swept away in 1117 and was rebuilt using stone, however, it was deluged again in 1333. Finally, in 1345 it was repaired properly. Though the bridge did not ruin furthermore, the problem of it getting flooded persisted.

This bridge is famous for being the only one that outlasted the World War2 as all the others excepting this one, was bombed during the retreat of the Nazis in 1944. It is believed that it was Hitler’s command to retain it, probably because the treasures belonging to the Uffizi gallery were hoarded here. However, while the bridge was not bombed, it was blocked on both ends by the ruins of the demolished buildings on both sides.

As it was being built it was posing a hindrance to the Vasari Corridor, so the corridor was swirled around the tower making the bridge appear layered. 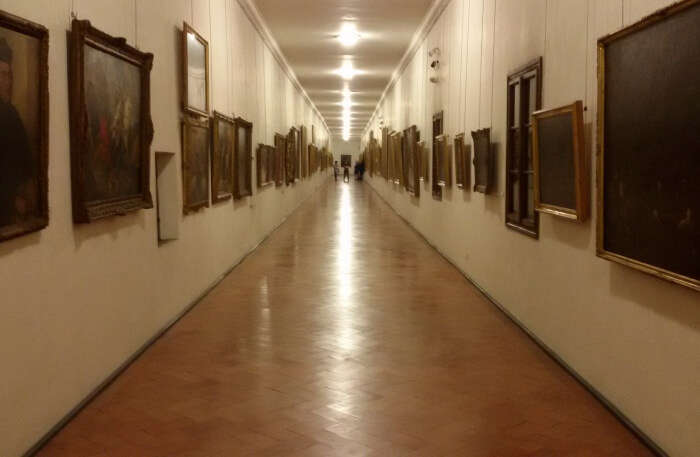 These were aligned on the sideways leaving plenty of space for the passage in the middle and was termed as the famous Vasari Corridor. The Ponte Vecchio Firenze connecting the Palazzo Vecchio to the Pitti Palace was actually this clandestine channel that was built by Vasari for the Duke of Cosimo I de’Medici in 1565.

In 1953 Medici’s successor- Ferdinando reformed this structure by replacing butcher shops, tanneries, and fish market (that brought in a lot of stench and dirt) with jewelry, art galleries, and souvenir stores.
Till date it is one of the prime centers in Florence, that is abuzz with a lot of commercial activities including trading of gold. These shops overlooking the central passage are still there, each possessing a storeroom that was built over the Ponte Vecchio river.

Suggested Read: 16 Enchanting Beaches In Italy For An Unforgettable Vacation By The Ocean In 2022

2. The Bust Of Benvenuto Cellini 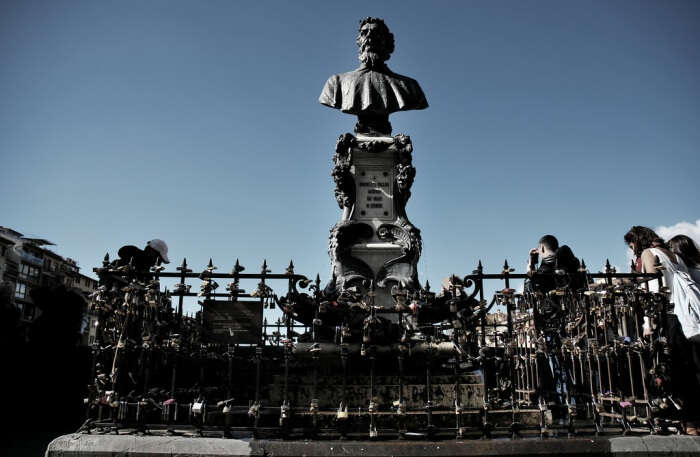 The center of the bridge was flanked by two terraces with picturesque views. The eastern one amidst the shops was an integral part of the Vasari corridor and the other terrace was proud to exhibit the magnificent bust of Benvenuto Cellini who was a prolific multitalented goldsmith. This artifact was created by Raffaello – a renowned sculptor of those days. Today this venue is one of the star attractions for the tourists visiting Florence. 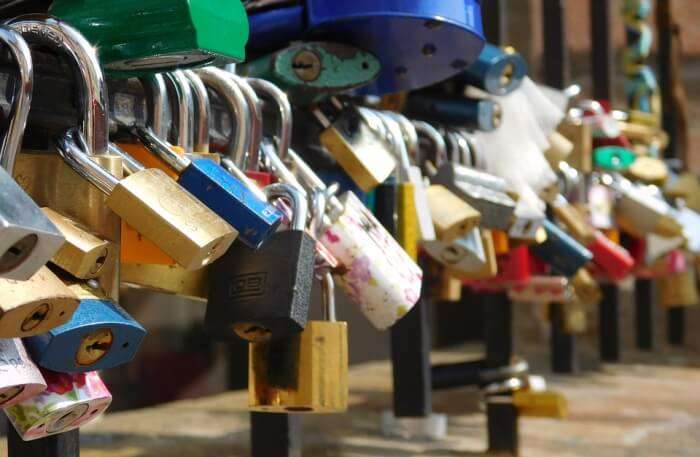 Based on a prevalent myth, lovers would visit the monument of Benvenuto Cellini, suspend padlocks on to the gates and throw the keys away in the river under Ponte Vecchio, wishing for everlasting love and bonding. While the Ponte Vecchio locks are still suspended on the gates of this property, new attempts of continuing this practice are strongly discouraged by imposing monetary fines as a step towards protecting the heritage property.

The Ponte De Vecchio has created a record of sorts for being the photographed the maximum number of times. The contour of the compact jewelry shops alongside the bridge creates a flashing picture, not just during the day but also in the evenings when the display of the lighting effects is reflected on the still waters, creating a panoramic view, that the tourists love to capture.

Places To Visit Around Ponte Vecchio

While the entire stretch of Ponte Vecchio itself is a complete tourist spot and has it all, there are several places around it which are worth a dekko and thronged by tourists at all times. 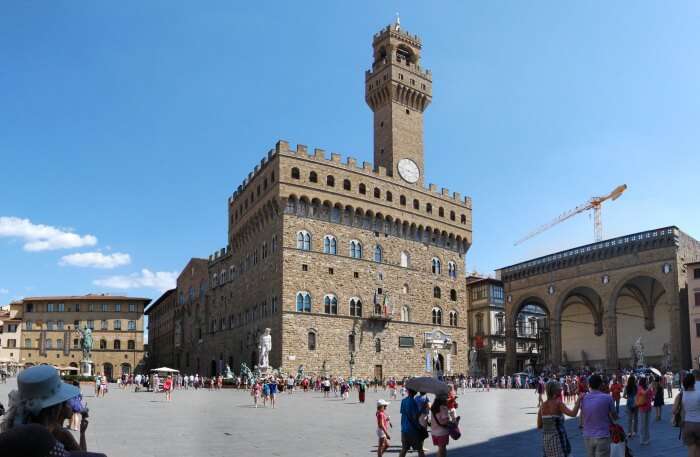 One of the prime tourist destinations in Florence is Piazza Del Signoria, which is actually the town square, connected with most of the other sightseeing destinations like Uffizi museum, Palazzo Vecchio, the Punte Vecchio Bridge, Loggia de Lanzi and so on. Centuries ago, it functioned as a political center. It is also a hub, where noteworthy statuettes are exhibited, some of them being the statue of Hercules, Perseus with Head of Medusa, Caucus, the fountain of Neptune, and also a duplicate copy of the statue of David by Michelangelo. 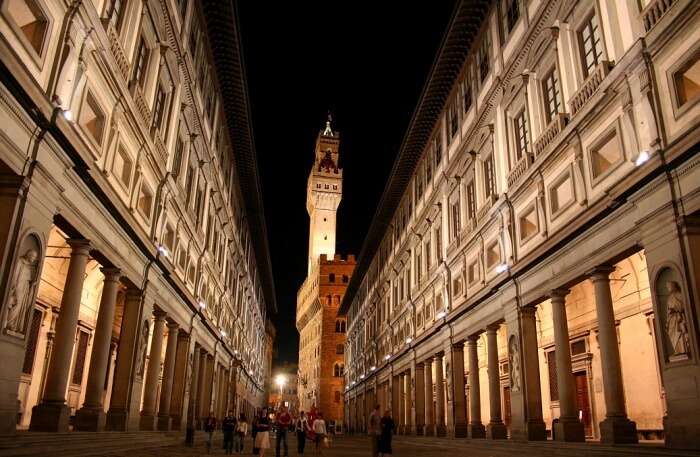 Uffizi Gallery is a well-known art museum situated adjacent to the Piazza del Signoria. This museum is spread over two floors of this massive edifice that was constructed in the 14th century. It houses some of the most priceless masterpieces of renaissance period that include the likes of Lippi, Botticelli, Giotto, Simone Martini, Leonardo, Michelangelo etc. Even antique statues and busts of the Medici family, as well as rare roman replicas of lost Greek statuaries, adorn this place. This place is a must visit if one has a quest for knowledge in the field of art and architecture. This heritage site known as Palazzo Pitti is one of the most opulent and capacious palaces of the Renaissance period that is walking distance away from Ponte Vecchio. It is located on the southern side of Ponte Vecchio River and is actually a colossal edifice that has been converted into a treasure trove of a collection of artwork. It houses several museums, namely a) Palatine Museum b) Silver Museum, c) Porcelain Museum d) Modern Art Gallery e) Costume Gallery or Galleria del Costume. 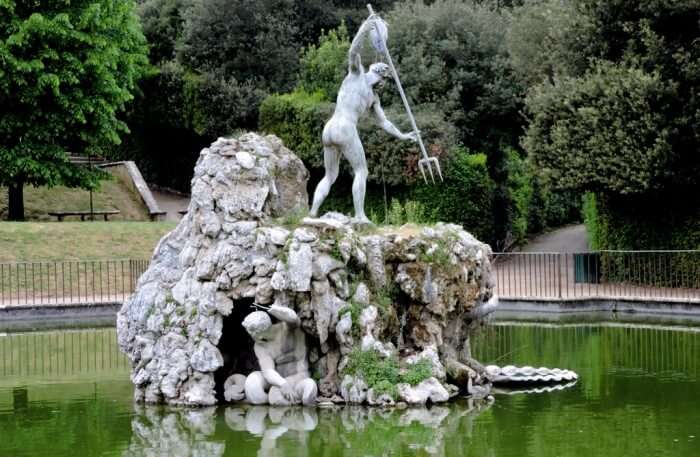 Located behind the Pitti Palace, the Boboli gardens is yet another top tourist spot. It is a more than a 400years old park, that was restored and revamped for Medici and served the purpose of a theatre the first opera was held.

A classic example of Italian Garden, it is now converted into an open-air museum that has a collection of famous artworks from the ancient and renaissance period. Several fountains and caves are also an integral part of this park. It holds a theatre known as Nymphaeum as well.

Suggested Read: Only For 2 Weeks In Italy, These Charming Places Should Be On Your Itinerary! 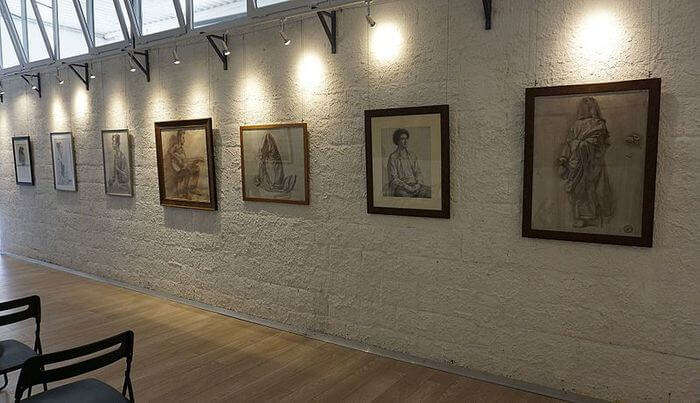 It is yet another museum, albeit one with a strong historical relevance as it houses the famous sculpture of David by Michelangelo. It was founded by the grand duke of Tuscany and served the purpose of teaching the fine arts students. Out of all the many galleries in Florence, this one stands out, for being around the only bridge to house shops and dwellings upon itself.

Some Tips You Should Keep In Mind 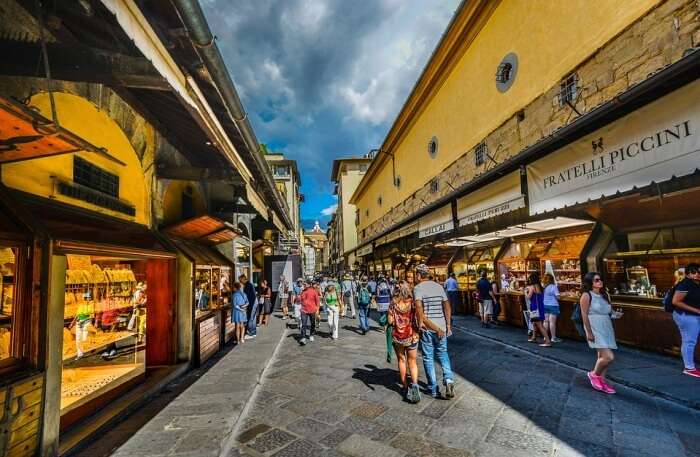 Ponte Vecchio is a congested area as it is a pedestrian-only bridge having several tourist spots so visiting them in the first hour helps in avoiding the din. The security is strict here as police cars are always seen patrolling here despite the traffic being closed. It is a wheelchair friendly place and excellent for strollers as well, as the bridge is on a single level without stairways. The place is best toured on foot however hop on hop off tours are equally good. It is also well connected to Oltrarno area that is a hub for good restaurants and cafes.

Further Read: Shopping In Italy 2022: 6 Best Places For The Shopaholics To Indulge In An Extravaganza

Ponte Vecchio bridge is an integral part of the Tuscany capital Florence. It is located across the River Arno barely one block away from the Uffizi Gallery and other prominent sightseeing destinations in Florence. Millions of travelers throng the Tuscany capital to explore and feat their eyes on Ponte Vecchio and other historical sites. They also get a fair dose of the art and architecture inherent there since the Renaissance period. So a visit to Italy would be incomplete if one does not take a tour of this ancient bridge along with the areas surrounding it.