Pura Ulun Danu Bratan: A Guide To The Most Majestic Temple Located In The Lap Of Bali 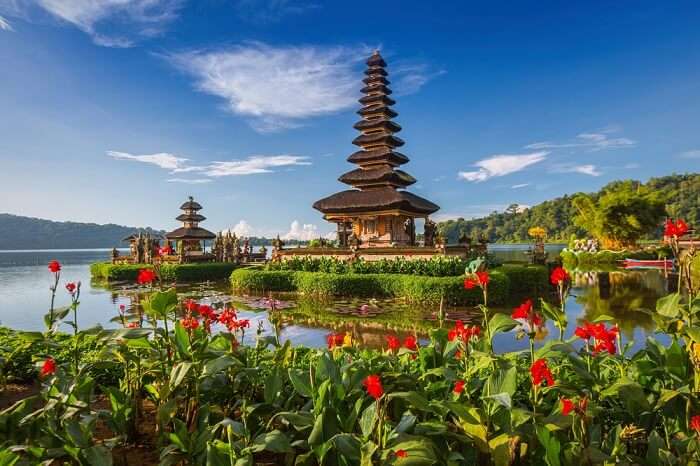 Situated along the banks of Lake Bratan, Pura Ulun Danu Bratan In Bali Indonesia is a Hindu Temple devoted to the Hindu gods Brahma, Vishnu, and Shiva. Ulun Danu Bratan translating to ‘the source temple of Lake Beratan’ is a water temple that serves the entire outflow region near the Bedugul area in Bali. The mountains encircling this location give it the characteristic mesmerizing, dreamy touch and make this temple a hot spot for photographers and tourists. It is most popular for its historical relevance along with the characteristic Balinese architecture and picturesque location.

Lake Beratan is known as the Lake of Holy Mountain simply because of the high fertility levels in the surrounding area. Dewi Danu, the Balinese Goddess of the lakes, water, and rivers, is also worshipped in this water temple. There is also a statue of Lord Buddha here, which makes it a major attraction for the Buddhists, as well.

The Pura Ulun Danu Bratan temple is sometimes also referred to as ‘The floating Temple’ since it appears to be floating when the river rises and submerges the adjoining parts of the temple complex. If you are planning a short trip to Bali, visiting this architectural brilliance is an absolute must! Read on to find out more about it.

History Of The Floating Temple

Pura Ulun Danu Bratan temple at an altitude of 1200 m, represents the feminine aspects of Nature, while another temple Puri Besakih depicts the male facet. It maintains the fertility of the area and is the major control over all other water temples there, thus bringing about a balance to nature.

The story begins with the Mengwi kingdom. This 17th-century temple was rebuilt by the King of Mengwi, I Gusti Agung Putu after it was destroyed by volcanic eruptions that burnt down the entire village leaving out only the long tiers of the temple. The temple was reconstructed by the ruler on higher grounds with the leftover pieces and is now one of the landmark architectures of the island of Bali. Incidentally, it is also pictured on the 50,000 Rupiah bill.

Must Read: Know All About Bali – FAQs From Travelers

Legends About The Temple

The Pura Ulun Danu Batur also majorly worships Lord Shiva and has a three-tiered shrine dedicated to him and Devi Parvati, his consort. Legend has it that Lord Shiva once moved the peak of Mount Mahameru, breaking it into two separate parts. He then settled down one part, to be named Mount Agung that was meant to be dedicated to his son Putrajaya. The other part came to be known as Mount Baturand was dedicated as the throne of Dewi Danu (who was actually the manifestation of Vishnu).
These two mountains make up the two entities of nature, man and woman; and thereby complete the balance of Nature. This legend also refers to the origin of the source God Ida Sang Hyang Widhi Wasa.

Suggested Read: 50 Things To Do In Bali That’ll Let You Have A Memorable Vacay!

Architecture Of The Temple

The Ulun Danu Bratan temple has a startling architecture in the form of an intermingling of the Indonesian Balinese architectural features like the tiered shrines and other popular features characteristic of a Hindu architecture.

The temple consists of four sacred buildings. The Linga Pura has three tiers and is dedicated to the offerings of Lord Shiva and Parvati. Another shrine dedicated to Lord Brahma stands at seven tiers. The Pura Puncak Mangu stands eleven tiers high and was built in dedication to Lord Vishnu. The Pura Teratai Bang is the main temple and Pura Dalem Purwa was built in dedication to the great Sang Hyang Widhi.

The style of the building is mainly dedicated to the Hindu ideologies. There are three holy colors used in the building – red symbolizing Brahma, who is the Creator of all; Black symbolizing Vishnu, who maintains and preserves the balance of nature; and lastly white symbolizing Shiva, who is known as the Destroyer! Several people come to this place of worship to fulfil their desires of fertility, prosperity and a sense of complete well-being in life.

Suggested Read: Scuba Diving In Bali: 7 Dive Sites To Dive Like A Mermaid

Things To See In The Temple

Tips For Visiting The Temple

Further Read: Your Guide To A Honeymoon In Kuta Beach, Bali

Sometimes the mist rises from the Lake Bratan and reduces visibility, and the weather becomes chilly. Then when the mist slowly lifts up, spellbinding view of the magical mountains surrounding a beautiful temple unveils. It indeed is a sight worth witnessing. So, make sure that you don’t miss to witness this magical place on your next trip to Bali with TravelTriangle!