Rome In Winter: 10 Reasons To Visit The Ancient City When The Temperatures Drop 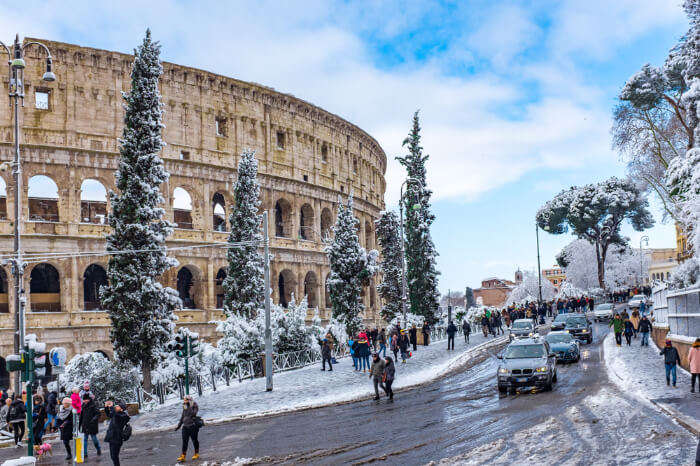 Rome in winter is no less to be called unworthy for a trip. Truth be told, some would state that the little crowds and lower costs make it the best time to visit the place. Maybe Rome isn’t the main European city that rings a bell when somebody refers to telltale Christmas destination. But, believe us, the Italian capital can be highly compensating to visit amid the chilly months. Continue reading our blog post to discover why we claim so, especially if you are thinking about a tour to Rome in winter.

10 Reasons To Visit Rome In Winter

Rome in winter may simply be the perfect vacation goal. Between the plenitude of cultural sights, dynamic bistro lounge scene, and gentle atmosphere that offers you a joyful tour. Here are the top 10 reasons why it is worth spending your winter holidays in Rome.

1.Weather: To appreciate the winter sunshine

Rome during the wintertime is a whole new adventure that you ought to not to miss anyhow. This city is well-known for some stunning and strong winter sunlight, as the sun rests low within the horizon and shines splendidly, with warm rays brightening Rome’s cobbled streets. It does seldom snow in Rome. But yet the temperature is more reasonable to feel comfortable i.e. above freezing point. Average temperatures are around 12.9°C (55.2°F) amid the daytime in the winter, dropping to 2.6°C (36.7°F) overnight. Nonetheless, that likewise implies that you can get some beautiful highs of 16-22°C when the sun is sparkling which implies you’ll be throwing off your coats at the late morning time.

Must Read: Nightlife In Italy: 6 Cities That Are A Must On Every Party Starter’s Bucket List!

There is a wealth of museums, courts and square to explore in Rome, a large number of which you’ll likely discover when endeavoring to explore something unique. So, if you like vintage clothing, Rome has many treasure vintage shops, so head on and have a rummage! Indeed, the excellence of Rome is that – regardless of how lost you get on its streets, you’ll not get exhausted. The bewildering bistros, palatial architecture, and enticing shops will keep you engaged even though you are clueless about where you are. Also, walk through the art loaded halls of Palazzo Braschi and Palazzo Barberini to view the classical contributions to the artistic literature. This is what to give special regard to Rome as you get to wander around as you want.

There are many temporary decorated Christmas lights rinks to pick from in Rome, which are open from November till February. And, yes, there are four to five spots in Rome in winter where you can skate outside in the shadow of the grand building and the best one is just beneath the Castel Sant’Angelo. Walk around in the Trastevere or have dinner, then get your skates on and enjoy skating until midnight!

The Eternal City has lots of neighborhoods, all with their own distinguished identities, that implies you have got countless places to discover. While most tourists adhere to the historic center during their tour in Rome, it’s deserving to voyage out to the city’s further-flung neighborhoods for a breathtaking view of this modern-day capital. Neighborhoods such as Pigneto, Ostiense, and Quadraro are a more modern quarter with the local Roman air and picturesque street art that will stimulate the interest of any graffiti lover. Discover street art by Blu and JBRock in the core of Ostiense before traveling over to Pigneto to know about the legacy of filmmaker Pier Paolo Pasolini’s and take a bite by eating at his favorite bistro. Don’t forget to get clicked around those funky wall arts!

5. Festivals: To take part in celebrations

Christmas is a quite major ordeal in Rome. But celebrations in Rome doesn’t end with December 25th it goes much beyond. Well, on New Year’s Eve, shows are organized all through the city and firecrackers light the sky over the Colosseum offering a wonderful outing. Right from the new year, the festivals begin again for the Epiphany on 6th January, when La Befana delivers gifts to youngsters. Afterward, in late January and February, you’ll see kids all dressed in quirky costumes taking over the road. Piazzas go up against a semi-permanent layer of confetti as casual social occasions rejoice Carnevale. It comes full circle in the acrobatic and parade show in Piazza del Popolo.

In winter, Italians love to keep their stomachs warm with roast chestnuts, pasta carbonara, and minestrone soup. Also, vendors can be seen selling arrostocalde by the Spanish Steps, close to Piazza Navona, outside the Orange Garden, and on a significant number of the corners in the market. Further, February marks the city readies for Carnevale, with special sweet treats like Castagnole that are fried dough balls typically stuffed with cream custard as well as frappe hogging in the cake shops. It’ll be a foodie’s delight!

Rather than battling for the excellent views of and inside the ruin, you get to enjoy them from every sphere! Especially, because in this season Rome will be less crowded, offering the perfect chance to view the Colosseum at the best. From interior and exterior, the Colosseum in a winter time is rejuvenating and relaxing. You get the best opportunity of viewing Colosseum flawlessly, which is a priority for tourists in Rome.

8. Vatican City: For some alone time with the almighty

The Vatican is headquarters of the Roman Catholic Church, which is a separate location within the city of Rome. It’s likewise home to a few of the most popular historical sites in Rome, like the St. Peter’s Basilica and Sistine Chapel. You can really enjoy the Sistine Chapel without the swarms of tourists and you can also get to sit down on one of the benches lining the walls within the Sistine Chapel. Something you won’t, in fact, get to see in the peak season when you’re in a crowd of other visitors. Must watch things in Chapel include displays of Egyptian mummies, bronze busts, classical statues, and yes, the Michelangelo-painted Sistine Chapel. Also, Basilica of St. Peter, which is an Italian Renaissance church is decorated with the sort of splendor you will ultimately become numb to watch. If you’re really interested in art and religious history, buy a ticket to the Vatican museum too.

Suggested Read: Pompeii Ruins: Everything You Need To Know About This Historic Gem In Italy

9. Excursion: To go on a day out at the lake

Catch a train at the at Ostiense station and within 30 min you’ll reach the town of Bracciano on Lake Bracciano, a lovely destination in the cooler climate for a walk or even to indulge for the lakeside lunch. Visit the Castle of Bracciano called Castello Orsini-Odescalchi to look into a properly preserved medieval fortress and historical center with stunning perspectives. As one of the biggest and best-kept up palaces in Italy, this place has facilitated a few prominent weddings like the ones of Tom Cruise and Katie Holmes. In case that you have rented a car, drive around the lake to see any of the other lakeside towns like Trevignano Romano or Anguillara Sabazia. Trevignano, specifically, will offer you a lot of dazzling lakeside restaurants, a large number of which serve typical fish from the lake (generally carp) in an assortment of awesome ways and tastes.

10. Rides: To explore Rome on a Vespa

Last but not least… After all who can overlook the exemplary scenes of Roman holiday flashing through the city on a vintage Vespa? On a sunny winter time, it’s an ideal trick to bounce on a Vespa and roam and enjoy around as you like. The Eternal City is perfect for bike touring and there’s nothing more fun than absorbing some history and winter sun from the back of a Vespa enjoying your personal ride. You haven’t encountered the genuine soul of Rome until you’ve taken a ride on a Vespa so make sure to add this uncommon adventure to your to-do list in Rome!

As should be obvious, Rome in wintertime can be similarly as enticing and glorious as some other European metropolis. Besides, in the event that you despise 30°C + temperatures and crowds of sightseers at all the places, odds are you’ll discover Rome considerably all the more enchanting in the non-peak season. So, plan a trip to Rome, get set go and say Buona sera Rome!

Q. What clothes to pack for Rome in November?

A. Since Rome in Winter can get quite chilly, it is best to pack sweaters, coats and jackets for your trip. Walking shoes are advisable as well as a scarf to cover up. Make sure to carry your jeans as well since some places in Rome have a dress code as well.

Q. Is January a good time to visit Rome?

A. Yes, January is a good time to visit Rome.

Q. What is the best month to visit Rome?

A. The best months to visit Rome are from October to April.

Q. Does it normally snow in Rome?

A. No, it does not snow in Rome usually.

A. Rome is quite cold in winters.

Q. Is there a dress code in Rome?

A. While there is no strict dress code in Rome, if you also plan on visiting the Vatican City and St Peter’s Basilica, make sure to carry your jeans and leggings. Places of religious sentiment may not allow bare shoulders or skirts, hence tourists are advised to dress accordingly.

Q. What is the best area to stay in Rome?

A. If you want to explore the best of Rome’s nightlife, then Trastevere is a good place to stay. However for those interested in enjoying the food and shopping scene, Testaccio is a great neighbourhood. For tourists interested in art and history, Ancient Rome is the perfect choice.

15 Reasons Why Spending Winter In Australia 2021 Is Better Than Being Anywhere Else!

14 Places To Visit Near Delhi To Witness Snowfall In 2021