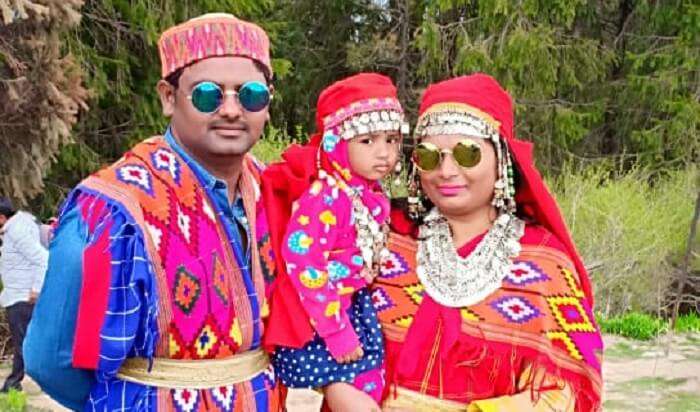 As I am from Hyderabad, I and my wife have a great liking for mountains and often talk about the various hill stations and mountains we would like to visit in our lives. Ever since we got married, we had dreamt of going to Shimla, especially for our honeymoon but couldn’t due to some reasons. Hence when it came to taking a summer break we immediately knew where to go and decided to pack our bags for Shimla-Manali in April. Choosing these destinations was pretty easy as we were looking to go to a place that is a romantic escape for the two of us and has a ‘wow’ factor which would keep our kid entertained.

We started surfing and landed on TravelTriangle’s page where we saw various packages. After sharing our plans with them we were soon contacted by an agent who took great care in creating a great itinerary for us. This 7 days trip was everything that we could ask especially with a child on-board.

A Glimpse Of Our 7 Days Shimla-Manali Trip Details

Must Read: 7 Best Airbnbs In Himachal Pradesh For One Of The Coziest Staycations Ever

Weather In Shimla-Manali In April

It was one of the best decisions we took to travel to Shimla and Manali in April as the Manali temperature in April was absolutely pleasant. You could see snow on the far away mountains with cool wind blowing. The Shimla temperature in April ranges between 20-30 degrees celsius. April is one of the best months to head to these places as during this time the areas are less crowded as tourist season usually starts in May.

What To Pack For A Trip To Shimla-Manali In April

If you are visiting Shimla in summers, pack light clothes. Make sure to pack a couple of warm clothes for the nights because the evenings can get chilly. Do not forget to carry a strong pair of shoes for walking and strolling on the mountains. Rest assured, you will be comfortable if you pack these necessary items.

Getting Around In Shimla-Manali In April

There are a number of buses that ply from Shimla to nearby places and one can easily get on these buses to roam around at nearby places. Apart from that, private taxis and shared cabs ply in both Shimla and Manali. Shared cabs are still cheaper as compared to private cabs that can cost a bomb. We suggest you make sure that your tour costs cover a private cab with an experienced driver to save money.

Places & Experiences That Made Our Shimla-Manali Trip Memorable

1. Shimla – Queen Of The Hills

Upon our arrival in Delhi, we boarded the bus and started our Shimla trip which was very comfortable. On the way we stopped at Pinjore Gardens which was super fun and a nice halt to stretch a little. After we checked into our hotel we decided to go out for a stroll and explore the surroundings. The mountain terrains and lush greenery reminded us what we have been missing all these years. Soon we headed back to the hotel and slept to refresh ourselves for the next few days.

Next day we were excited to visit Kufri, the land with snow which was pure magic. We played around for hours before heading to other famous locations in the nearby places like Baba Balaknath Temple, Jakhoo Temple, Chini Bungalow and more.

Suggested Read: Himachal Pradesh In May: Top 10 Places To Escape The Busy City Life In Summer

2. Manali – Valley Of The Gods

Soon we moved on to the next destination which is a very famous place of Himachal – Manali. While on the way we enjoyed the magnificent view which was lush green mountains playing hide and seek with clouds. As we reached we decided to see few of the touristy locations of Manali like Pandoh Dam and Sunder Nagar Lake. Once we were done exploring these two sites, it was time for some shopping at Kullu shopping point.

This place was truly one of the highlights of our trip. The beauty of this place is hard to put in words as we were completely speechless after reaching here. There are a lot of adventure activities that happen in this area but with snow all around us, we caught ourselves running around and playing with snow ball, making snowman and became childlike.

Suggested Read: Travel Tips For Himachal Pradesh: 11 Things You Need To Know Before Visiting This Paradise In 2019

After having a great time in Himachal we felt heavy in our hearts to leave this beautiful place and all the fun. So when we reached Delhi, we decided to change our moods and go for some sightseeing as the Capital has many touristy spots. We covered places like Qutub Minar, India Gate, and Humanyun’s Tomb since all three of them could be easily done in one day without much of a hassle. This day truly was satisfying for our touristy soul as we enjoyed every bit of it.

Suggested Read: 14 Adventurous Places In Delhi NCR That Will Make Your Heart Skip A Beat

While we were planning our trip, we knew that even if we would have to extend our stay, we would and see the famous Taj Mahal. Coming for a Shimla trip from Hyderabad and not visiting this seventh wonder of the world was something that we did not want to do. We left early in the morning and reached Agra soon. The first glimpse of the Taj, made us go weak in knees and say, “Wah Taj”.

In Agra, we also visited Itmad-Ud-Daula, Agra Fort and Sikandara which we experience on its own.

Suggested Read: Heart Is Where The Hills Are: Our Snowy Honeymoon Trip To Himachal

Food In Shimla And Manali

Finding food in both Shimla and Manali was easy. Since both the locations are major tourist spots, there are various restaurants and dhabas that have come up in the area. Maggi is one of the most common snacks that you can find in Shimla. But if you are interested in trying some local cuisines then do try dishes like Madra, babru and more. In Manali, we really enjoyed our food in the hotel which was really good.

Shopping In Shimla And Manali

There are many markets in both Shimla and Manali from where you can pick up nice stuff. We hoarded on wooden toys for our kid in Shimla along with a few handbags for my wife.

Some Important Tips To Keep In Mind

Our Experience With TravelTriangle

Starting from telling exactly what all we need on our trip till the very end of our vacation, our experience with TravelTriangle was really very good. Their agents are ever so ready to help you and will take note of all the details and make sure to deliver it. It was made sure that we travel with the utmost comfort and see all the best locations in these seven days.

Excited to plan a trip to Shimla-Manali in April with your loved ones? Well, don’t wait then. Just customize your itinerary and plan your trip to Himachal with TravelTriangle right away! You’d surely be treated with nature’s bounty and a lot more in the north!

Q. Can we find snow in Shimla in April?

A. April is the start of summers in Shimla hence you would not see snow in Shimla.

Q. Can we see Kufri in April?

A. When in Kufri you can see snow some patches of snow.

Q. Are there any vegetarian restaurants in Shimla?

A. Yes, there are many restaurants and dhabas where you can get vegetarian food.

Q. Are there any hospitals in Shimla and Manali?

A. Yes, there are many hospitals and small clinics in both Shimla and Manali. But it is advised that you bring your basic medicines along with you.

Q. Is there snow in Manali during April?

A. Gulaba in Manali is the only snow point in April where you can witness snow.

Q. What clothes to wear in Manali in April?

A. Cotton dresses are adequate. As a precautionary measure,carry light woollens.

Q. Which is better Shimla or Nainital?

A. Nainital is famous for boating while people usually stop over in Shimla before departing for Solang Valley or other picturesque tourist hotpots. To sum it up, both areas have their unique charm.

Camping In Manali 2020: A Guide On 18 Best Places For An Adventurous Experience Beyond The Call Of Mountains!

30 One Day Picnic Spots Near Pune In Summer 2020 Which Are Must Visit!

22 Best Places To Visit In Kullu That Will Make Your Trip A Happy One In 2020!