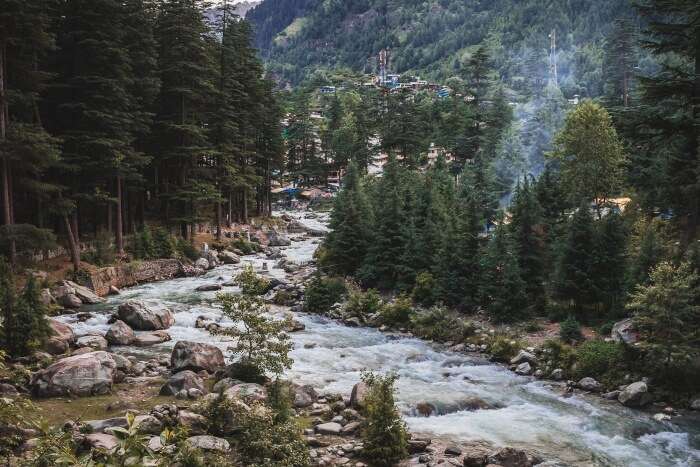 The dreamiest state of India, Himachal Pradesh is a destination that attracts tourists from all over the/ world. Breathtaking mountains, lush greenery, and clear rivers define the character of this Land of the Gods. The state is a home to the Dalai Lama and a strong Tibetan vibe can be felt as you tour around the hill stations. The various Buddhist temples and monasteries are the truest reflection of this Tibetan influence.

Along with its picturesqueness, people admire the state of Himachal also because they get to indulge in various adventurous outdoor activities like trekking, rappelling, and skiing. There are 5 drainage systems in Himachal Pradesh, namely Ravi, Beas, Chenab, Sutlej, and Yamuna. Both Indus and Ganges basins are bestowed with water by the state of Himachal Pradesh. These rivers in Himachal Pradesh have a continuous flow with snow and rainfall feeding them. A dense cover of vegetation protects these beautiful rivers flowing amidst the mountains, making for a mesmerising scenery.

The rivers of Himachal Pradesh are a sight to behold. Each river of this heavenly land flows perennially and reflects the natural richness of the region. If you want to be a witness to the eternal glory of these rivers, make sure you add most of them to your itinerary.

Given below is a list of rivers in Himachal Pradesh that can be found in different hill stations of this northern state of India.

This river originates from the Himalayas, in the central region of Himachal Pradesh and flows at a stretch of 470 kilometers and meets the Sutlej River in Punjab. The drainage basin of Beas River is 20,303 square kilometers long.

Beas river in Himachal Pradesh is believed to have mythological significance and is even a home to a small number of dolphins. It is said that Ved Vyasa created this river from the Vyas Kund. Rising 4,361 metres above the sea level in Kullu, the river travels through Mandi District and arrives at Kangra District. This river is also one of the most sought-after places to visit in Manali. Hands down, it is one of the most famous rivers of Himachal Pradesh.

Speciality: Has a mythological significance to it.

2. Sutlej River – One of the Major Rivers

The waters of Satluj River in Himachal Pradesh are being looked under the Indus Waters Treaty and get navigated to the irrigation canals of India. The river Sutlej originates from the western end of Lake Rakshastal, Tibet.

Speciality: One of the longest rivers.

Suggested Read: Himachal Pradesh In May: Top 10 Places To Escape The Busy City Life In Summer

Traditionally known by the name Chandrabhaga River, Chenab is one of the major rivers of India as well as Pakistan. Forming in the upper region of the Himalayas, in Lahaul and Spiti, Chenab river flows across the districts like Ramban, Doda, Kishtwar, Jammu, and Reasi, reaching the lands of Punjab as well as Pakistan.

The river ends up meeting the Indus River. The waters of this river too have been looked after by Indus Waters Treaty in Pakistan. Undoubtedly, amongst all the rivers of Himachal Pradesh, the Chenab River is one of the prominent ones.

Speciality: One of the fiver major rivers in Punjab.

4. Yamuna River – One of the Largest Tributaries of Ganges

A tributary of the Ganges, Yamuna river covers the states of Uttar Pradesh and Haryana and travels through Uttarakhand and then Delhi. This is the second-largest tributary of the Ganges and the longest one all over India. When flowing through the states of India, the river meets tributaries, namely Tons, Chambal, Sindh, Betwa, and Ken. Yamuna River is one of the most popular Himachal rivers.

The river Yamuna’s name has been originated from the Sanskrit word ‘Yama’ that means ‘twin’ – in view of the fact that it runs along the Ganges.

Suggested Read: 15 Best Places To Visit In Himachal Pradesh In December 2022 For A Snowy Retreat!

5. Ravi River – Witnessed The Battle of The Ten Kings

Ravi river in Himachal Pradesh is considered to be a transboundary river that flows through the Northwestern region of India and the eastern area of Pakistan. This river too comes under the Indus Water Treaty in India. The river also forms an imperative part of the Indus River basin.

Historically, this river was known by the name Iravati amongst Indians during the Vedic era while the Greeks addressed this river by the name of Hydraotes. It is also believed that some phases of The Battle of The Ten Kings were fought over this river only. Certainly, it is one of the most prominent Himachal rivers.

Suggested Read: Himachal Pradesh In April 2022: An Escape For Our Family To Unveil The Wonders Of The Hills

This river originates around the Indo-Tibetan border, resulting in the formation of Baspa Valley, which is also called Sangla Valley. Baspa Valley is considered one of the best sceneries in the Himalayas with Ching Sakhago Pass located atop. Glaciers enhance the flow of this river.

The flow of the river begins from Baspa Hills and meets Sutlej River close to Karcham. Around the upper as well as middle slopes, the river travels through oak and pine forests while in the lower slopes it passes through meadows and pastures.

This river in Himachal Pradesh meets Beas at Bhuntar and originates from ManTalai Glacier, above which is the Pin Parbati Pass. The river crosses the town of Manikaran. Parvati River Valley comes in the route of various districts like Lahaul, Spiti, and Debsa Pass. On the banks of the Parvati River, you’ll find geothermal springs around the towns of Khirganga and Manikaran.

Historical Trip To Shimla Shimla-Manali In April Rivers In Uttarakhand

Which are the best river activities to partake in Himachal Pradesh?

Some of the most fun river activities or river sports to partake in Himachal Pradesh are as follows:
1. River Rafting
2. Boating
3. Kayaking
4. Rowing

Where is Beas River located?

Beas River is located in the state of Himachal Pradesh. The river originates from the mighty Himalayas and travels through the Mandi District and Kangra District in the state. One can indulge in a plethora of fun activities at Beas River, near Manali.

What is so special about the Chenab River?

Chenab River is one of the major rivers of both India as well as Pakistan. A transboundary river, the Chenab River originates from the Himalayas and flows through various districts of Himachal as well as Punjab. The river merges into the prominent Indus River in Pakistan.

How to reach the Parvati River?

One of the most prominent attractions in Kasol, the famed Parvati River can easily be reached by taking a bus to Kasol. One can also take a train to Joginder Nagar railway station which is located near Parvati Valley and take a taxi from thereon.

What are some interesting facts about the Ravi River?

Some interesting facts about the Ravi River are:
1. It is a transboundary river that flows between India and Pakistan
2. The river was known by the name Iravati during the Vedic Era, while the Greeks called it Hydraotes.
3. The river also witnessed the iconic Battle of The Ten Kings.

11 Most Convincing Reasons To Visit Mcleodganj This Summer 2022