Temples In Gangtok: Visit The Most Profound Ones For A Spiritual Experience 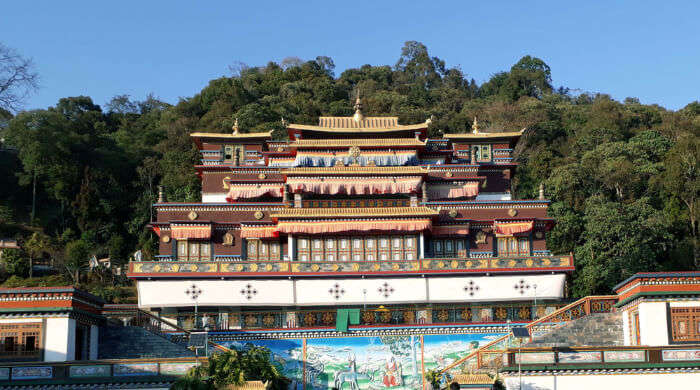 Gangtok is a beautiful city settled in Kangchenjunga hills with mesmerizing natural beauty comprising of snow-capped mountains, blue shimmering lakes, water springs, and charming waterfalls. It has become increasingly popular among tourists due to the jaw-dropping natural beauty, rich heritage, and a beautiful amalgamation of Temples in Gangtok with Buddist monasteries. Get a glimpse of Sikkim’s valuable culture and history by visiting the mesmerizing temples. The entire atmosphere in the temples is peaceful and divine, which will easily delight and astonish you to the core. Visit the most beautifully architectured temples and seek blessings of the Almighty.

Temples in Gangtok are visited by many pilgrimages throughout the year to get blessings from the divine. Apart from the sacred vibes, these temples are also known for panoramic views as most of the temples are located at higher altitude with lush green surroundings.

The Thakurbai Temple was built in the year 1935 and is situated in the heart of the city. Due to its location, it is easily accessible by the people who want to visit the temple daily for regular rituals. Chhath Puja is a special ritual performed in the Thakurbai temple, which is dedicated to Lord Surya. There are many other festivals celebrated in the temple throughout the year and during the months of November, March, June, and February an exceptional light and sound show is held in the evenings. The temple is believed to be one of the oldest temples in Gangtok and has a beautiful architecture.

Must Read: Paragliding In Gangtok: Witness The Breathtaking Sikkimese Beauty From A Bird’s Eye View!

Suggested Read: 8 Honeymoon Places In Gangtok And Darjeeling For Your Romantic Trip In 2021

The Hanuman Tok temple is situated on the upper hills and is 11 kilometers from Gangtok. The place is crammed throughout the year with devotees from all over the country. The temple is located 7200 feet above sea level with serenity and tranquility in the surroundings. The picturesque beauty surrounding the Hanuman Tok is spellbinding for the devotees. From the temple, one can get an enthralling view of the Kangchenjunga mountain ranges which is surrounded by scenic beauty. As per the Hindu mythology, it is believed that this temple was a resting place of Lord Hanuman while returning from Lanka.

Suggested Read: Shopping In Gangtok 2021: 8 Things That Can Be Taken Home As Mesmerizing Souvenirs

The temple is situated 60 kilometers away from the alluring city of Gangtok. To witness Baba Harbhajan Singh Memorial Temple you have to travel along Kupup valley to Tukla. Harbhajan Singh was a diligent soldier of the Indian Army, who lost his life at a young age of 26 years. This shrine is dedicated to the Hero of Nathula – Baba Harbhajan Singh. During the year 1967, he was honored with Maha Vir Chakra for his bravery and martyrdom. As per the sources, it is believed that Harbhajan Singh slipped and drowned in a glacier when he was leading a group of mules carrying supplies. For three days, army men couldnt find his body until the dead Harbhajan Singh came in the dreams of a fellow soldier and told him where his dead body was. The fellow soldiers found his body in the exact spot as told by Harbhajan Singh in the dream. The shrine is built at an altitude of 4000 meters from the sea level, witness the shrine to experience the story of a greatsoldier.

Suggested Read: 10 Best Restaurants In Gangtok For Indulging In The True Sikkimese Flavors

5. Shiv Mandir – For the devotees of Lord Shiva

It is an old temple which is dedicated to Lord Shiva and is a famous destination for the devotees of Lord Shiva. The temple attracts both Hindu believers as well as the nature lovers with its charming amalgamation of pious atmosphere and spellbinding views. Get a mesmerizing view of snow-capped mountain peaks from the blissful Shiva Temple which is settled at an altitude of 12000 feet above the sea level. Shiv Mandir is also famous for mesmerizing sunset point, witness the sun descending in the hills with the chanting prayer sound in the background. The entire scene is breathtaking and gives you an ethereal experience.

Suggested Read: 6 Best Homestays In Gangtok Which Are A Must Pick For Budget-Friendly Stay!

Prabateyswar Shivalaya Temple is a sacred Hindu temple, which is surrounded by avid devotees of Lord Shiva. Sawan is the time when the temple is crammed with pilgrimage from the entire country. It is also celebrated with utmost zeal by the locals and as well as by the devotees from other parts of the country. During the festival period, people drink the holy water from the consecrated vessel. This place is located 60 kilometers from Gangtok.

Further Read: 10 Famous Cafes In Gangtok To Enjoy The Sikkimese Culture In 2021

Marvel at the beautiful temples in Gangtok and get mesmerized with the culture and history of these temples. Visit these temples and witness the scenic beauty of Gangtok in the breathtaking Himalayan ranges. So, go ahead and book your holiday to Gangtok with TravelTriangle.

Traveling, writing, and food are my best-kept secrets

Visit These Sacred Temples In Guruvayur For A Wholesome Vacation In Kerala!