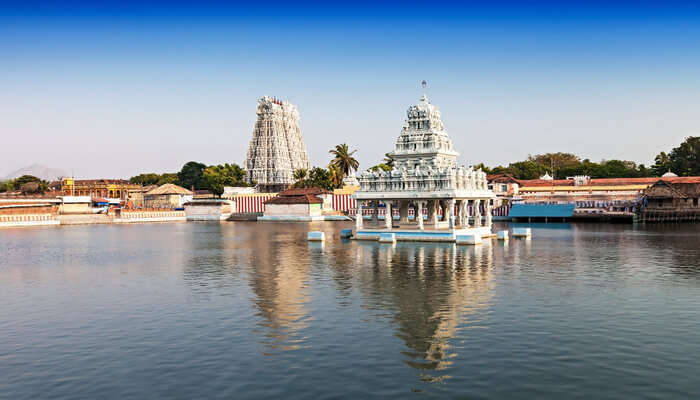 At the southernmost tip of the Indian subcontinent, where the land meets the ocean, where three water bodies form a convergence, and where the primaeval cultures prosper in harmony, lies the alluring city of Kanyakumari. With palm trees and sandy beaches outlining its periphery, it is the abode of fascinating structures and ancient temples. Though the temples in Kanyakumari are limited in number, their beauty surpasses all. With a rich history and captivating legends, these temples provide an enchanting walk through the religious heritage of the south.

Scroll below to discover the 5 best Hindu temples in Kanyakumari that must figure in your Tamil Nadu itinerary when you’re ready to take a trip of this Indian state and this fascinating city. 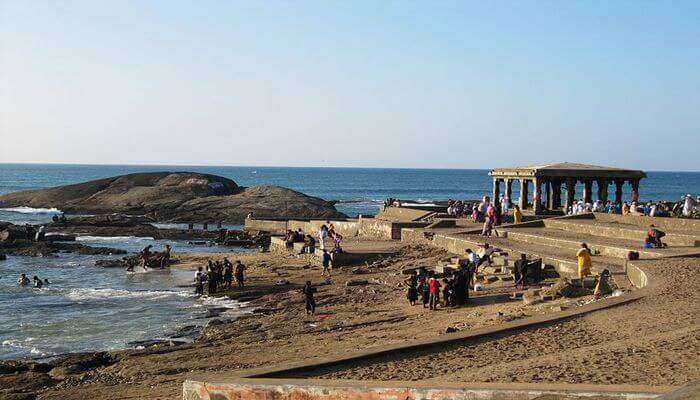 Overlooking the gently lapping waves of blue sea, this is one of the most gorgeous temples in Kanyakumari and is renowned for its mystical aura and intriguing history. Popular as Devi Kumari Mandir, Kumari Amman Temple, and Bhagavathy Amman Temple, the glorious architecture of this temple was shaped by the Pandayas and renovated by the Nayaks. Commemorating the passionate love and tragic faith of Goddess Parvati, the temple worships the reincarnation of the goddess as Kanya Kumari.

You’ll also find a light shining somewhere in the middle of the sea. And though it may appear to be a lighthouse, it is said to be the shining ruby of the goddess’ nose ring. This light has said to misguide many ships of the years, causing lost ships to mistake the rocky cliffs as the shore and crash into them. Thus, the east-facing door of the Kanyakumari temple is kept closed throughout the year, opening only on very rare occasions.

Must Read: 10 Idyllic Waterfalls In Kanyakumari That Look Straight Out Of Paradise In 2022! 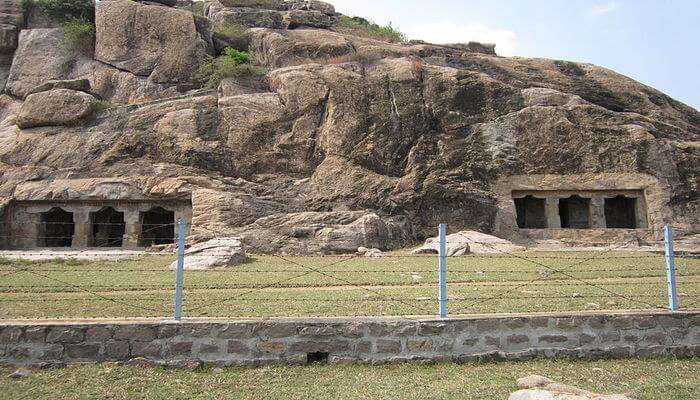 Fourth in the chronological order of the 12 Sivalayam temples in Kanyakumari, the primaeval Thirunanthikarai Cave Temple witness crowds of pilgrims thronging its complex to admire the fine ancient architecture and picturesque beauty surrounding it. Carbon dating of this structure revealed it to be built around the 7th century when it was a popular Jain shrine. However, during the 9th century, the temple was taken over by Raja Raja Chola, the king of the Chola dynasty. He renovated the temple by consecrating a Shivlinga and establishing intricate sculptures. Vibrant murals covered the interior walls illustrating the scenes from Ramayana and Mahabharata mythologies.

Suggested Read: Bike Trip from Kanyakumari To Kashmir: A Ride Of Glory 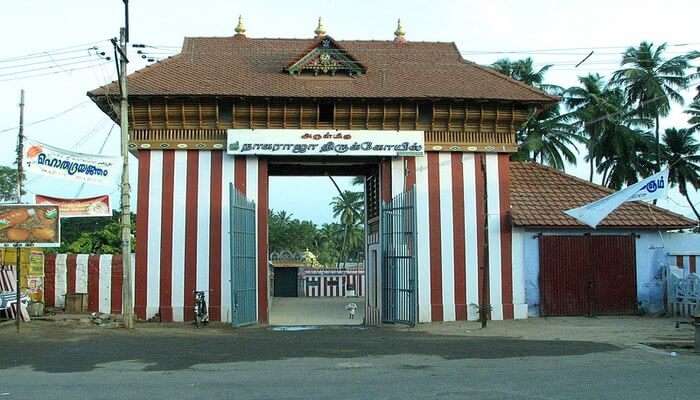 Nagaraja temple is one of the most loved tourist destinations near Kanyakumari due to the mythology linked with it. It is said that snakes are ever-present near the temple to protect it and even though many snakes have been spotted, no casualties have occurred because of them. Just as the name suggests, the temple is devoted to the serpent deity, a 5 headed naga.
Nagaraja temple also houses shrines dedicated to Lord Shiva and Lord Anantasayana which are just as ravishing as the temple.

The luscious green surroundings and stiff coconut trees can attract plenty of tourists from around the world. Wet sand scraped out of the installed idol is given out as the prasadam during the month of Avani(August to September) which records the most footfall in the temple during the year.

Suggested Read: Top 23 Tourist Places In Kanyakumari 2022: The Land Where The Oceans Meet 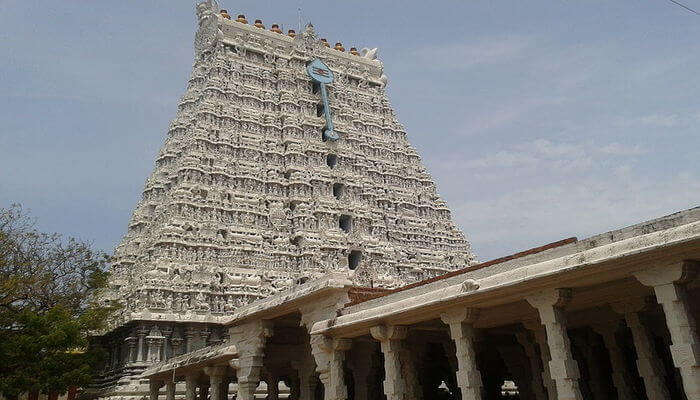 Along the verge of Bay of Bengal lies the second abode dedicated to Lord Murugan. Commonly known as Tiruchendur Arulmigu Subramaniaswamy Temple to the locals, it is situated in the town of Tiruchendur right outside Kanyakumari. It has been recalled countless times that Lord Muruga defeated the demon Soorapadma and prayed to Lord Shiva atop the Chandana hill where the temple has been built. The temple is quite popular for both its eccentric appearance and its distinctive religious connections.

Suggested Read: 6 Surreal Beaches In Kanyakumari You Can’t Afford To Miss In 2022! 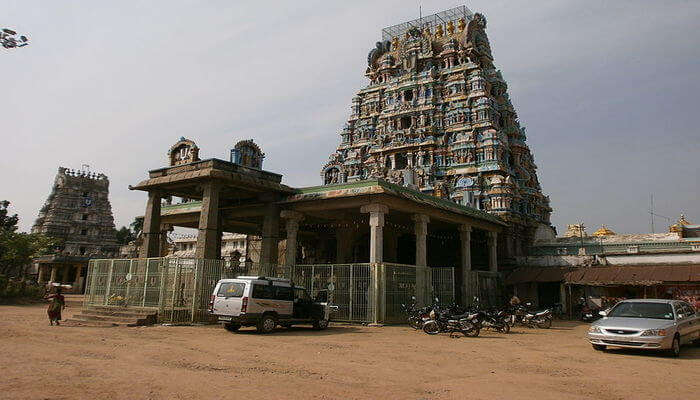 A small, secluded yet fantastic temple not far away from Kanyakumari is the Adikesava Perumal Temple. Mostly visited by the more religiously bent people, it is one of a kind experience to be there. Being surrounded by 3 rivers, it is the perfect place for people in search of peace and tranquillity. There are almost 50 inscriptions inside the temple in both Tamil and Sanskrit, and also protects huge sculptures of different lords and deities. The principal idol of Lord Adikesava becomes exponentially beautiful during March, April, September, and October as the sun rays fall directly on it. The temple boasts of strong wooden pillars, roof, and doors that give a very traditional feel to the temple.

Intricate carvings cover the Shikharas while multihued murals paint the interior of all these temples in Kanyakumari. So get ready to embark on the journey to ethereal landscapes filled with lush greenery, tranquil waters and glorious temples on your holiday in Tamil Nadu with your loved ones.

How many temples are there in Kanyakumari?

From small temples to magnificent shrines, there are numerous temples in Kanyakumari. In fact, this southernmost city of Indian subcontinent is well-known for the marvellous ancient temples standing tall in it. However, the most remarkable of them all is the Kumari Amman Temple or Kanyakumari Temple.

Is there any dress code for visiting the temples in Kanyakumari?

There is no dress code in particular. Just make sure your clothes are decent. Skimpy and revealing clothes can hurt the religious sentiments of people, so avoid them when visiting a temple. Make sure you properly cleanse yourself before you enter a temple’s premises. It is also prohibited to enter a temple complex after consuming alcohol.

What is the best time to explore Kanyakumari?

Best time to visit Kanyakumari is from October to March. Being a coastal city, the weather here is generally hot and humid for the maximum time of the year. However, during the winter season, the weather becomes pleasant and ideal for travelling.

How many days are required to explore Kanyakumari fully?

To fully explore all the iconic temples and memorable tourists’ spots, you will need just 1-2 days to explore Kanyakumari.

What is the best mode of transportation to travel in Kanyakumari?

To travel in Kanyakumari, you have three modes to choose from. Local buses and special SETC buses run by the government provide a cheap mode for traveling to all the major attractions present in the city and hence is the most selected option by tourists. The second option is hiring a taxi or cab from one of the tour operators for a more personalised and comfortable experience. The last option is using cycle rickshaws. Though they are not a speedy way to commute, cycle rickshaws provide a more traditional touch to exploring the city and get acquainted with the simplistic life of the locals. 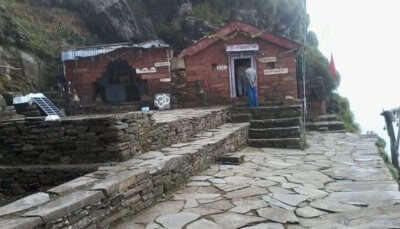 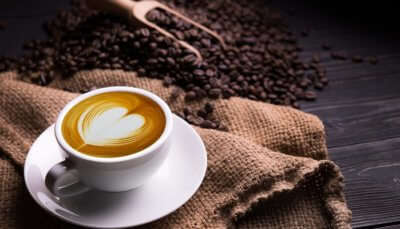 4 Best Cafes in Kuniyamuthur for Coffee Lovers in 2023