The Twelve Apostles In Australia That’ll Let You Sneak A Peek Into The Country’s Culture And History! 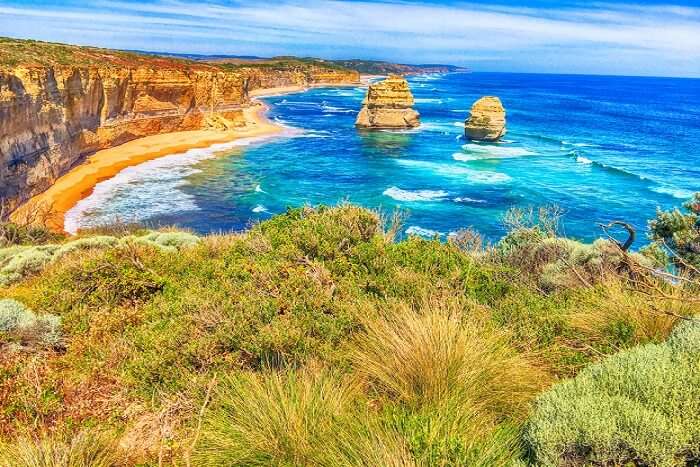 The twelve apostles in Australia happen to be the jewel on the crown of the Great Ocean Road, which is home to a number of marvellous sites. The road that leads to the twelve apostles offers a breathtaking view with the rugged and dramatic cliffs that are carved out of the sea and the panoramic views that are seen across the azure and rich water. Getting closer to the Port Campbell will get you closer to the most famous rock formations of Victoria.

You will get to avail the flights from behind the twelve apostles Visitor Centre as flights depart from there all through the day. You will get to choose the length of your flight and depending on your length of the flight you can get to see many other mesmerising scenes apart from the twelve apostles. You can encounter Loch Ard George, the Grotto, London Bridge, the Bay of Island and the complete Shipwrecked Coast that goes all the way to the Cape Otway, which also happens to be the site of Australia’s oldest lighthouse.

History Of The Twelve Apostles

There are a number of the twelve apostles in Australia facts that will keep you hooked to know more about the history of the place.

Over almost twenty years ago the salt and surf of the moody and erratic Southern Ocean have started to erode the limestone cliffs that were rugged along the coastline of Victoria. The effect of constant water and wind has carved out the cavernous caves in the rocks that were soft. With the passing of time, these caves had turned into majestic arches that framed the sea. However, because of the fact that the storms and surf were relentless, the arches had eventually collapsed had turned into high stacks that reached up to 45 meters into the sky and which were isolated from the cliffs. Once you reach there you will come to know a lot of fun facts about the twelve apostles in Australia.

Suggested Read: 15 Scenic Trails For Hiking In The Awesome Australia In 2022

The twelve apostles of Australia are surrounded with a number of mysteries and myths and thus people from all around the world come to see these. Throughout the day, the apostles show various playing of colours. The colours change as according to the position of the sun. When the sun raises the golden of her rays gives the rock a hue of red and rose. As the sun begins to set the sky explodes with the colour orange and lavender and these same colours fall on the rocks and give them a hue of a rainbow that enchants the travellers with its amazing beauty. Thereafter, as the sky becomes dark, the apostles too drop into shadows.

The apostles have their own mighty names. The names of the apostles are as follows: Razorback, Bakers Oven Rock, Thunder Cave, Island Archway, Grotto and Sentinel Rocks. You can indulge in standing beneath the looming shadows of the apostles r have a walk with a guide through the Loch Ard Gorge.

The Twelve Apostles In Australia: Things To See Around

Once you have reached and witnessed the twelve apostles you can skip the sea and the sand to experience the beautiful towns that are present on the coastline. You might also consider walking for hours through the rugged cliffs that are carved and you can also visit the rainforest for the love of the bright and beautiful fauna that it offers. It can be said without any doubt, that the twelve apostles, being as mighty as they are will capture your soul in no time and will give you an experience of a lifetime.

The Twelve Apostles: Things To Do

• Getting a bird’s eye view of the apostles from a helicopter flight
• Exploring the dramatic coastline with time in hand
• Enjoying a walk along the Great Ocean that ends at the twelve apostles.

Below, these points are described in details, which will give you a clearer idea about what to do and how to do it at the twelve apostles.

You can enjoy the scenic beauty of the twelve apostles from the viewing platform and also check out the interpretative displays that are put out on the boardwalk. The best time of getting this view is either dawn or the dusk as at these times you can also encounter little penguins.

The twelve apostles is a seven kilometres walk from Princetown in Australia . It is a moderate walk on crushed gravel, rubber tiles, boardwalk and steps. You will encounter mesmerising coastal views and also get glimpses of birds and kangaroos. You can keep your car at the twelve apostles car parking zone and then get a bus to the Princetown to start your journey of adventure. In case you are looking forward to enjoying a really long walk then you can sign up for the four days twelve apostles Lodge Apostle Walk with a beautiful accommodation or have the complete 104 kms Great Ocean Walk in any other and a multiple numbers of ways. Check out the twelve apostles of Australia photos.

Must Read: Great Barrier Reef In Australia: An Exquisite Guide For An Amazing Destination!

You can witness the historic shipwreck displayed at the twelve apostles Visitor Information Centre situated in Port Campbell. You can then explore the complete Shipwreck Coast that has more than two hundred shipwrecks between Cape Otway and Port Fairy. This Historic Shipwreck Trail has twenty-five signposted sites that lead to the information plaques, which overlook the cliffs at the places where the wrecks had occurred.

If you wish to see the twelve apostles up and close then you might consider talking a beautiful tour with the Port Campbell Boat Charters. You will feel amazed when you will see the coastline that is constantly being whipped by the huge seas and howling winds. You will feel the sea spraying on your face, will hear the blowholes road as they will be sporting with water and further you will watch the creating foams around the stacks. If you take the boat ride on a rather calmer day, then you will witness the twelve apostles standing majestically in the glowing sun and their silhouettes go all glorious and sand coloured under the rays of the sun. Here you will further learn about the coastline geology and the history that is associated with the shipwreck coast.

How to Reach The Twelve Apostles

To reach the twelve apostles you have to drive for almost four and a half hours from Melbourne via Geelong along the Great Ocean Road. You can thereafter return back to Melbourne by three and a half hours route that is inland and that goes along the Princess Highway. Moreover, from Melbourne, there are a number of options available to travel to the twelve apostles. The options include a day travel and longer stays as well.

You can then enjoy a self-guided walk at the Loch Ard George that will introduce you to the coastal ecology, history and geology of shipwreck. Thereafter, you can give the Grotto a visit where you can encounter rainbows that are made of sunshine and wave spray. Visit the Arch after this, which will offer you a grand view of the twelve apostles late in the afternoon. You can then go and explore London Bridge which was originally a natural archway but then had collapsed in the year of 1990.

Besides fishing, you can also enjoy various diving adventures as well as snorkelling on some of the finest sites of Australia that are shipwrecked. So if you have been planning that vacation for too long but are still looking for the right place then worry no more and have a trip to Australia for an experience like never before!