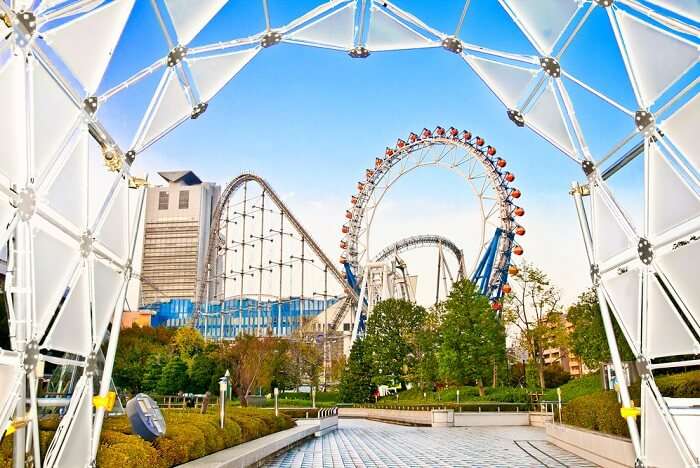 Japan, as a country has a myriad of choices for the tourists who visit here in large numbers every year. It has something for everyone; be it a nature lover, someone with an interest in ancient or modern art or the rich history and culture. The adventure freaks too will have a great time here as Japan is world famous for its amazing theme parks and which are located almost all the major cities so that you can plan your trip with one or more in mind. The theme parks in Japan not only has the thrilling rides to blow your mind, but there are also many more interesting activities and concepts which are unique to each place.

Read on to get a feel of some fun and exciting time you can have on your trip to Japan by visiting these awesome and fun-packed avenues with your little ones.

Amongst the first Disneyland which was started outside of USA, this is one of the best theme parks in Japan. The park was opened in 1983 and interestingly Walt Disney Company has only creative controls over the park. It is owned by Oriental Land Company. With seven different areas, this park is also designed on the lines of its original counterpart. There is a world bazaar, four traditional themes like Adventureland, Fantasyland, Tomorrowland and Westernland and the rest two are Mickey’s Toon Town and Critter Country. The park is known for its huge open spaces to accommodate the large crowds of visitors. Last year, this park was listed as the third most visited amusement park in the world. If you are looking for a day full of laughter and fun, then that is what you will get in this place for sure.

Must Read: 10 Unbeatably Fun Things To Do In Japan That All Travelers Must Try

This park is located in Osaka and was opened in the year 2001. Several attractions have been added down the years which have only added to it’s growing popularity. Recently, with the addition of The Wizarding World of Harry Potter, an area dedicated to the popular film series has put the park on the first position in the list of theme parks in Japan. The most popular ride from this area which is played in 3D effect is called the Forbidden Journey. There are in total 10 different sections in this park and each one is based on a different theme complete with its characters and different varieties of rides. A place where people of all ages are guaranteed to have a great time, this trip will surely become a treasured memory for the whole family.

This is a one of kind indoor park where you can get up close and personal with your favorite characters from Dragon Ball, One Piece, Naruto and many more. This anime theme park in Japan is conveniently located in Ikebukuro in Tokyo. The major attractions here are Chopper Quest, Shoot! Kamehameha, a fierce fight and Dragon Balls among many others. There is also a life-size model of Saiyan Space Pod where you can sit inside it and get the real feel. There are many photo booths with the popular characters or scenes as backdrops. This is a must visit place for all the video game buffs.

This theme park in Japan Tokyo is said to be one of the largest in the city with up to 44 attractions to boast of. It has some form of entertainment for all age groups starting from cute kids rides to thrilling ones for the grown-ups. The park looks beautiful at night when it is lit up by thousands of lights all around. There is an area where you will find a cluster of Cherry Blossom trees. It’s a treat to watch the beauty of these colorful nature’s creation from a ride in the park’s gondola during the spring season. Other popular rides include Goodjoba, Jewellumination, Bandit, Ferris Wheel and many more.

Located in different places like Minato, Osaka, etc this is an anime theme park in Japan which also has chains at some places in China too. Mainly famous for their arcade games and amusement rides which are related to Sega Intellectuals, the park is worth a visit if you are looking for a mixed bag of entertainment. The attractions are all centered around live action and anime themes. A shooting game where you shoot the skeletons to help the pirates or a driving simulator where you sit in a real car or a treasure hunt to uncover some mysteries; this place has it all to give you an adrenaline rush and then some more. The place also houses some popular cafes and restaurants to satisfy the taste buds.

One of the best water theme parks in Japan, Tokyo Summerland is where you can have a cool and relaxing time to beat the heat in the scorching summer months. The park is adorned with many exciting water slides and rides with both the indoor and outdoor options. The indoor rides are open all through the year. The iconic ride from this place called Dekasla is sure to be a delight for the adventure freak in you. The outdoor area which is called Adventure Lagoon is only open from July till October. There are a number of cafes and the Japanese style shaved ice called Kakigori is a must try.

A major amusement park in Kuwana region, it is also famous as water theme park in Japan. Along with the roller coasters, adventure rides, the park has a Hot Spring theme area where you can relax in the natural onsen designed separately for males and females. The waterpark is filled with water slides and pools and also a wave pool. There is also a flower park which hosts the largest flower show in the country during summer seasons. Apart from this, the park is spectacularly illuminated during the winter months making it a to go place for all seasons.

There are a number of abandoned theme parks in Japan and the creepiest of them is Takakanonuma Greenland located in Fukushima Prefecture. The park opened it’s doors to the public in the year 1973 and closed within two years because of a number of accidental deaths on the rides. It again had an unsuccessful stint in 1986 but was finally closed down in 1999. There are many eerie stories surrounding the place. Some reports say that the entire park was demolished in 2006 but photographer claims to have visited the place in 2007 and also clicked a number of pictures which looks exactly the same as from before.

An indoor theme park in Japan Tokyo, this place started in 1990 and houses the characters like My Melody, Hello Kitty, Pom Pom Purin and Chococat. All the rides and attractions are featured centering these famous cartoons which are a favorite among the young kids and toddlers. Along with the rides, you can also enjoy some tasty treats themed around these cute little friends.

Situated adjacent to the famous Disneyland, this is spread over an area of 176 acres in the Urayasu region in Japan. The park is divided into seven different themes called Ports of Call. A visit to this place will take you on a journey across the world to the famous city of Venice where you enjoy a ride in the Venetian Gondola. The Mysterious Island is centered around a volcano named Mt. Prometheus and there are many exciting and interesting rides to give you an experience of a lifetime. Other themes are Mermaid Lagoon, Arabian Coast, Lost River Delta, Port discovery and American Waterfront.

A family holiday can truly be made more exhilarating and memorable with a visit to a few of the above-mentioned theme parks in Japan. Simply get in touch with TravelTriangle, book your trip, and venture out for some fun-filled and happy days in the upcoming break. Also, don’t forget us to tell us about your experience here in the comments so that it can help other travelers!

What is the best theme park in Japan?

Some of the famous ones are Universal Studios Japan and Tokyo Disneyland. You have the Japan- originated theme parks too like the Legoland Park in Nagoya or FujiQ Highland.

How many theme parks are in Japan?

There are many such amusement parks, almost 100 and there are some famous ones like Disney.

How many Disney parks are there in Japan?

There is a Tokyo Disneyland which has many parks in it. You have the World Bazaar, Fantasyland, Toontown, Tomorrowland, Westernland and Critter Country. These parks are also found in other countries’ Walt Disney Magic Kingdom and Disneyland.

What is the best Disney park in the world?

No, it is known that Tokyo Disneyland is one of the least expensive Disney theme parks. This is because when you compare the yen to the US dollar, then you will see a difference in the rates. Thus, it is less cheaper than other Disneylands in the world.

28 Watersports In Goa That You Must Add to Your Bucket List For A Fun 2022 Vacay!

Snorkeling in Bangkok : 7 Intoxicating Sites For Setting On Adventure In 2022

Scuba Diving in Bangkok: Dive in Oceanic Paradises to Make Your 2022 Special

Skydiving Near Delhi: Take That Big Jump At One Of These 5 Places In 2022!