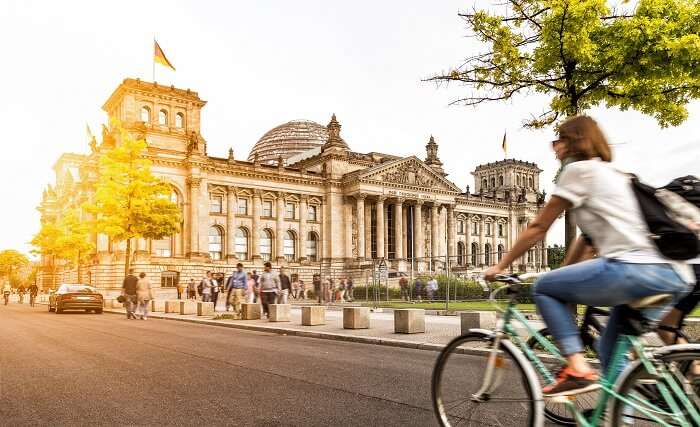 A historic city that has embraced modernity with gusto, Berlin is known for its magnificent architecture – both old and new. Showing off its battle scars with pride, Berlin has rebounded as an amazing world-class 21st-century city that packs a punch for its visitors. With world-class monuments, parks, memorials, clubs, and restaurants, there is no dearth of things to do in Berlin.

Top Ten Things To Do In Berlin

Don’t think too much about what to do in Berlin! We have a list to help you out: 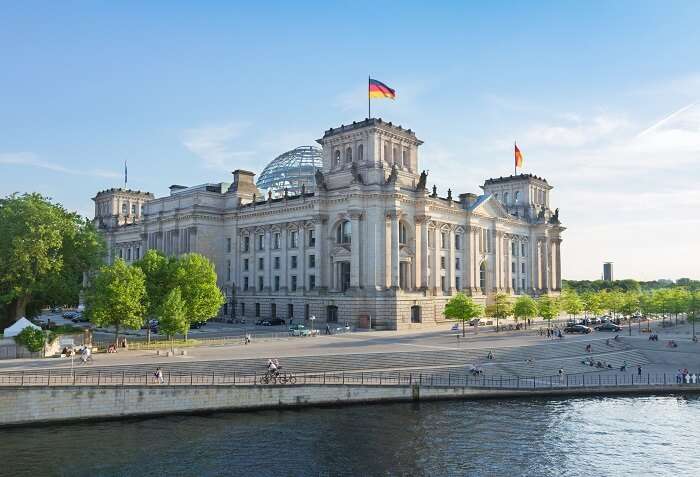 Suggested Read: 10 Extraordinary Things To Do During Your Summer Holidays In Europe

A visit to the Reichstag Building is one of the top things to do in Berlin. Better known as the German Parliament, it was built in 1894 and renovated in 1992 to add a glass dome symbolising transparency. It’s open to only a limited number of visitors each day and a wonderful place to gulp in 360 degree views of Berlin. 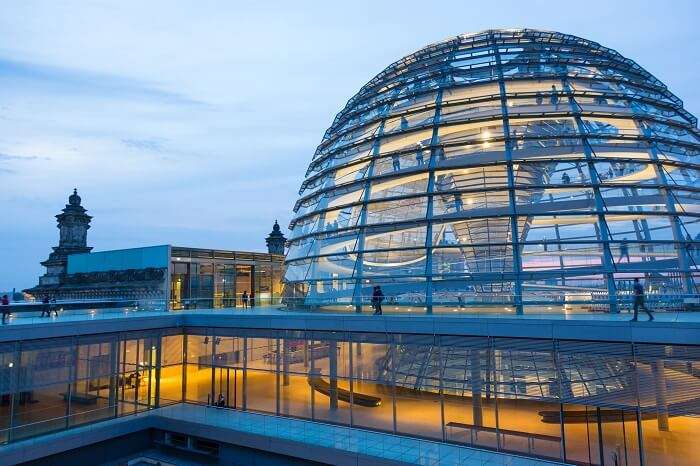 2. Walk down the East Side Gallery 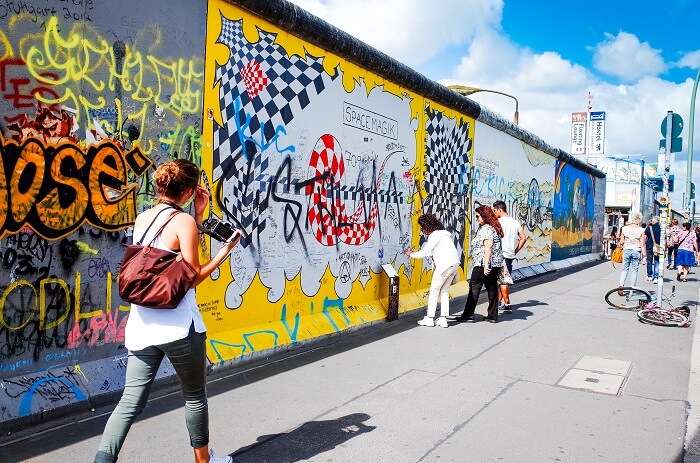 Berlin has a conflict-ridden history and the East Side Gallery is a grim yet important reminder of that. A popular open-air gallery, it is a 1316 metre long wall that reminds of the Berlin Wall. The wall is now covered in graffiti and art by famous artists demanding peace and love for the world. It should definitely be on your list of things to do in Berlin.
Location: Mühlenstraße 3-100, 10243 Berlin

3. Learn history at the Holocaust Memorial Suggested Read: 10 Castles In Germany That Look Straight Out Of A Fairytale

One of the top 10 things to do in Berlin is to pay your respect at the Holocaust Memorial. It is a grim reminder of the the fateful day when 3 million Jews were killed during the Holocaust. A great many tourists visit the memorial each year making it one of the most popular things to do in Berlin Germany.
Location: Cora-Berliner-Straße 1, 10117 Berlin

4. Go for a picnic at the Tiergarten park 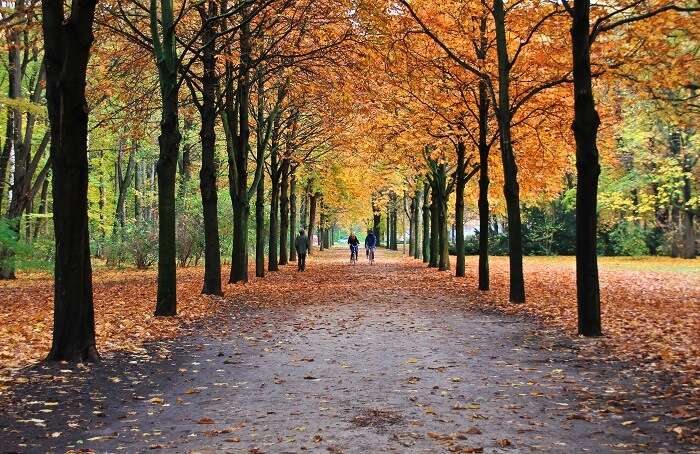 Among the fun things to do in Berlin is to enjoy a chilled beer in Tiergarten Park’s café after a nice run. Tiergarten is a lively park full of lawns and trees. The open-air lantern museum will also make a great addition to your list of things to do in Berlin! The park turns into a fairyland every evening when over 100 gas lanterns are lit!
Location: Str. des 17. Juni 31, 10785 Berlin

5. Explore art and architecture at the Museum Island 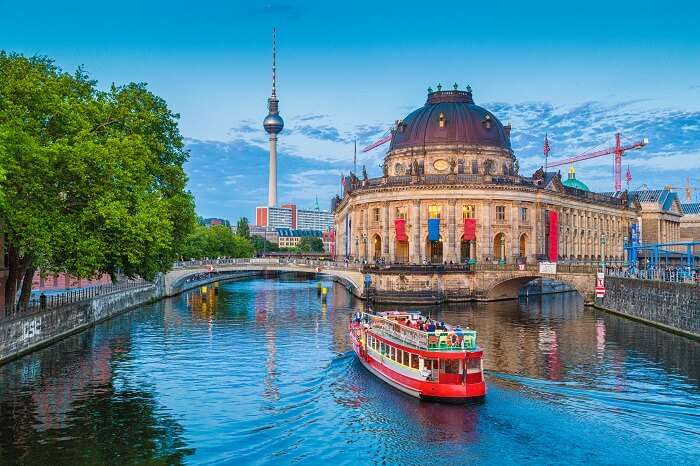 Wondering what to do in Berlin Germany? Think no more! A UNESCO World Heritage Site and home to five museums, the unique Museum Island displays art and artefacts from Ancient Egypt, Byzantine, and Berlin. The museum buildings themselves are spectacular; so make sure you find time for this with all the other stuff to do in Berlin!
Location: Museum Island, Berlin
Entry cost: INR 1,460/- per person (€18)

6. Shop for souvenirs at flea markets Berliners love their flea markets and shopping here is one of the most popular things to do in Berlin. Open mostly on Sundays, these markets have lots of hidden treasure! 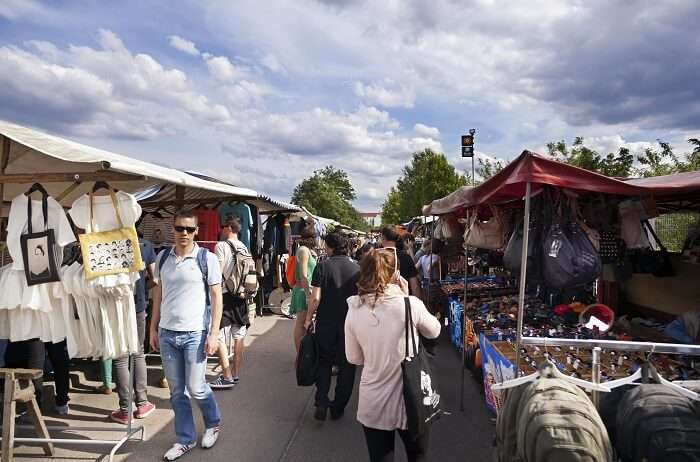 7. Cycle down the city’s alleys 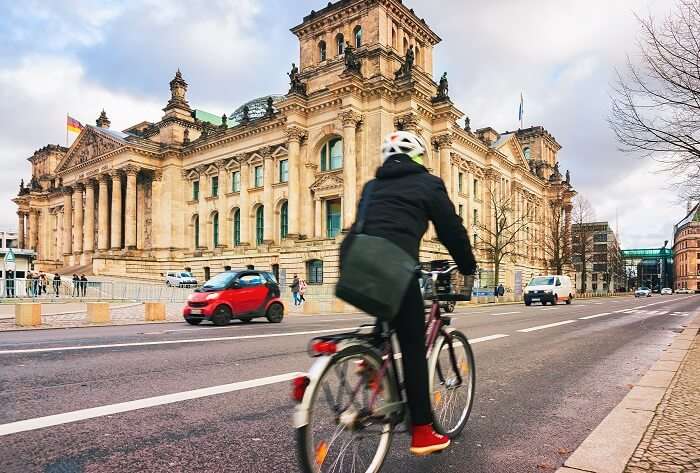 Suggested Read: Germany’s Got The World’s Most Powerful Passport In 2018 & It’ll Make You Wish You Lived There

Cycling has become one of the most popular activities to do in Berlin. You can easily rent a Deutsche Bahn Bike through the app ‘Call a Bike’ and find the nearest bicycle to zip around the city. It is one of the best things to do in Berlin at night as the city is beautifully lit up and absolutely safe.
Average rental charges: INR 300/- per person (€4)

8. Dance the night away at Tresor Berlin 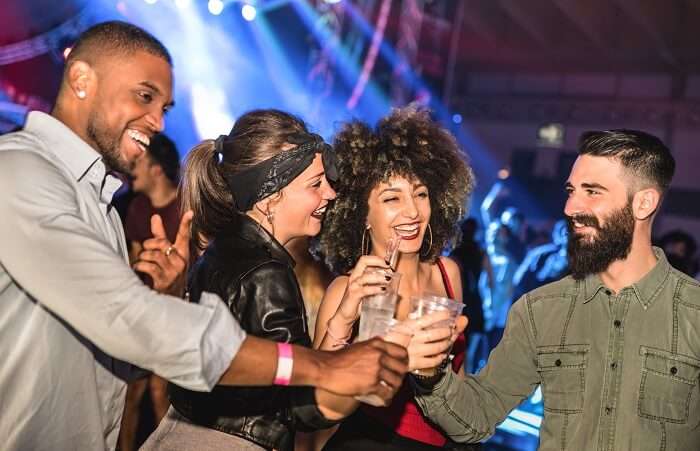 Berlin is a fun city and knows how to let its hair down! Head out to places like Tresor, Watergate, Gretchen, Matrix Club and Suicide Circus – some of the best nightclubs in the city. In fact, Berlin has a host of great clubs that play house, electronic, and dance music. Still wondering what to do in Berlin at night?
Location: Köpenicker Str. 70, 10179 Berlin
Average cost: INR 1,000/- per person (€13)

9. Eat a Wiener Schnitzel at KaDeWe 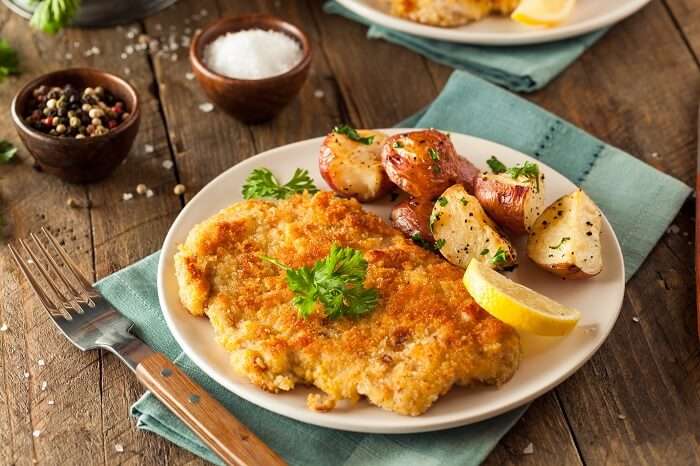 A Wiener Schnitzel is a delightful fried buttery dish and a trip to Berlin is incomplete without tasting one! Food tours are in fact one of the best things to see and do in Berlin. German cuisine is unique and interesting. Foodies wondering what to do in Berlin must just head to KaDeWe for a gastronomic joyride!
Location: Tauentzienstraße 21-24, 10789 Berlin
Average cost: INR 1,460/- per person (€18) 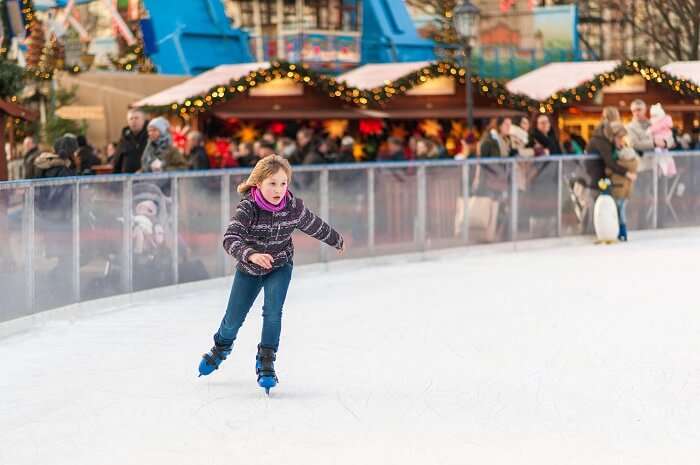 Apart from shopping at the Christmas Markets in Berlin, Ice Skating is among the most favorite things to do in Berlin in December. The Horst-Dohm is the largest outdoor skating rink and has an Olympic standard speed skating track as well as a figure skating track. With skates available on rent, this is the perfect family activity.
Location: Fritz-Wildung-Straße 9, 14199 Berlin
Average cost: INR 250/- per person (€3)

Further Read: Planning A European Holiday? Here’s How You Can Get Paid To Travel Across Europe!

Frequently Asked Questions About Things To Do In Berlin

Where does the name Berlin come from?

The origin of the name Berlin is not uncertain. However, it is widely believed that the name might have roots in West Slavician’s language and may be related to Old Polabian stem ‘berl’.

What can I do in Berlin?

There are many interesting things to do in Berlin that will keep you hooked. Some of the many things that you can do in Berlin are seeing the sunset from the top of the TV Tower in Berlin, driving around the city in Trabi, seeing the Holocaust memorial and going nightclubbing.

What is Berlin known for?

Berlin is famous for its impressive streets, great cuisine, and Spy stations that are always crowded with locals as well as tourists. Being the capital of Germany, it has always been in the limelight.

Where is Berlin situated?

Berlin is Germany’s capital and is situated in Northern Germany. It is within the state of Brandenburg.

What can I shop for in Berlin?

Berlin belts, Blutwurst, Ein Berliner and Frau Toni’s Perfumes are some of the things that you can shop for in Berlin. Berlin shopping experience is one of the best you will have.

Is English widely spoken in Berlin?

Yes, English is widely spoken in Berlin and you would be pretty comfortable if you are fluent in English.

What should I eat in Berlin?

Currywurst, Schnitzel, Pretzels, and Eisbein are some of the things that you must try in Berlin to know what Berlin’s cuisine is all about and why people keep raving about it.

What can I do in Berlin in 3 days?

There are many great things that you can do on a short trip to Berlin. Some of those things are taking a stroll around Berlin, visiting the Holocaust Museum, and seeing the Charlottenburg Palace.