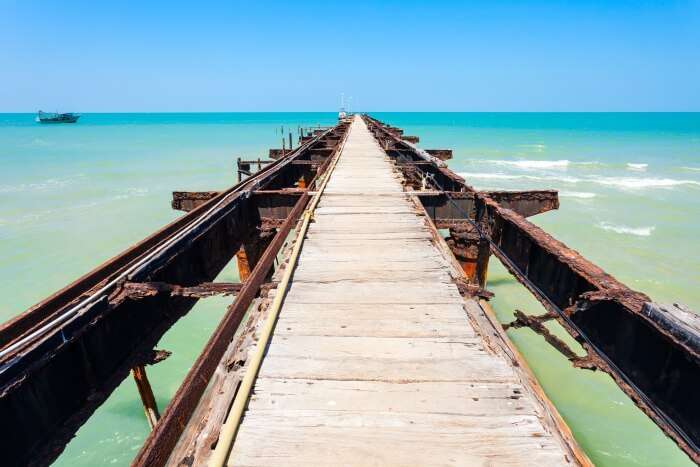 Your Sri Lanka visit would certainly be a memorable experience for the lifetime if you’ll add Mannar Island in your itinerary. Mannar is a place filled with several attractions that you can explore during a visit. It is home to the white sand, palm trees, gulls as well as terns, and of course, many rare wild donkeys and species of fishes that enchant the nature lovers.

Since this island is a major exit and entry point to and from India, it had been hard hit by various wars as well as other intended intrudes. But despite all the wars or desperate ruins over the period of time, this island still remains a beautiful and peaceful one where a large chunk of tourists keep flocking throughout the year. One of the popular tourist attractions of this place is the famous Portuguese-Dutch Star Fortress, where a big and exotic baobab tree is country’s notable landmark.

You can witness the landmines of the erstwhile Liberation Tigers of Tamil Eelam (LTTE) group that used such tactics during the 1990s to drive out the island’s large Muslim population. The Vavuniya–Mannar road is a witness to several such wars, so are most of the villages in this area that still remain abandoned. Visitors will also find many abandoned bunkers and watchtowers on the road at 50m interval. There are so many things to do in Mannar that one needs to be really choosy to involve in a few out of them all.

Top 10 Popular Things To Do In Mannar

Mannar Island has been denoted with several names in the past. It was known by several names in the past, including Manthei, Mathota, Mahathiththa, Mahaputra, and Mawatuthota. This destination has several notable attractions that always catch the attention of tourists. That is why, you should add it in your itinerary when touring in Sri Lanka. This place will definitely offer you pleasant memories to keep for the lifetime.

With an area of about 50 square kilometers, this island is mainly covered with vegetation and sands. Although, there are several activities you can get involved in but some of the best things to do in Mannar are as follows

1. Shrine of Our Lady of Madhu

One of the popular tourist attractions in Mannar district of Sri Lanka, the Shrine of Our Lady of Madhu is visited by countless visitors every day. With a history of over 400 years, it is a Roman Catholic Marian shrine in the island nation. This shrine also acts as a center for pilgrimage and worship for the Catholics who flock here from all over the world. Visitors can camp near this church to pray and meet other Catholics as well. This church and its nearby areas are very much peaceful thus it has become a beautiful pilgrimage center. It is one of the places with extraordinary atmosphere which appeal to all.

Suggested Read: 10 Places To Visit In Mannar That Are Microcosms Of Sri Lanka In 2019

Baobab Tree is a protected tree in Sri Lanka due to its rarity and antiquity factor. Although this tree is native to Africa, Madagascar, and Australia, it is believed to have been brought in Sri Lanka by the Arabian Traders. A study reveals that about 40 Baobab Trees are surviving in Sri Lanka alone, out of which 34 have been identified in the Mannar region itself. The Baobab Tree at Pallimunai is believed to be the oldest one and is even the largest of such trees existing in the country. Studies also reveal that this tree is approximately 800 years old. Make sure you keep this tree visit in your list of things to do in Mannar.

Must Read: 7 Best Hostels In Weligama For A Budget-Friendly Stay In Sri Lanka

Thanthirimale Rajamaha Viharaya is a unique tourist attraction in Mannar, Sri Lanka. While exploring the attractions in Mannar, you can’t ignore planning a visit to this famous spot. It is a popular pilgrimage-cum-worship center for the Buddhists and that is why devotees from around the world keep visiting here. It also has a historical significance and therefore it is visited by a large chunk of tourists from across the globe today. Besides its religious and historic importance, this place is also amazing for the tourists to explore numerous things like climbing the rock to pay respects at the Bodhi tree and much more. During your exploration at this place, you will not only enjoy the amazing views of the surroundings but also experience the spiritual energy which is visibly present here. The attraction of this historical location keeps the coming of visitors intact.

The Doric at Arippu is also a popular tourist attraction in Sri Lanka which enchants the visitors to Mannar for exploring and delving into various excursions. Also known as The Doric, this bungalow used to be the residence of the first British Governor of Ceylon. It is located amid the scenic beauty. You will literally be bound to get absorbed in the tranquility and peace which this highly significant and sought after location offers to its visitors. Although a few big brick walls of the monument are left now and it is already in the ruins, but its splendor and beauty would make a journey scintillating.

Thiruketheeswaram Kovil is one of the pancha ishwarams in Mannar, Sri Lanka with religious importance that always keeps it into limelight. There are five historical Sri Lankan Shiva temples established in the country which are believed to protect the island from the natural disaster. As it is one amongst them and devotees keep flocking here, it remains a favorite destination for everybody. The famous Maha Shivaratri festival celebrated here with pomp and show makes it worth enjoying at.

Also known as the Mannar fort, Dutch fort had been built by the Portuguese in 1560. In order to improve its beauty and modernize it, the fort had been rebuilt by the Dutch rulers in 1696 as well. Thereafter, the fort had been handed over to the British in 1795. Today, you can see many historic elements inside this fort. You can definitely assess the presence of ubiquitous donkeys everywhere while you spend good times in and around this fort. With an imposing Portuguese-Dutch construction, this fort showcases the architectural brilliance of region’s colonial rulers. It is visited by the tourists from across the world today.

Mannar Island Lighthouse is a popular attraction that had been built in 1915. Unfortunately, this 19m high tower couldn’t be maintained during the wars that occurred in the recent past due to presence of LTTE in the region. Once they were defeated and Sri Lanka attained peace, this light house was repaired. It has been made accessible for the general public. Good chunk of visitors come here to spend a great time.

Keeri Beach is located at mere 5 kilometers west of the Mannar Town in Sri Lanka. It is perfect for swimming activities. Although, this beach is not endowed with the beautiful stretches of sand, it is fringed by a small palmyra palm forest, which is a home to monkeys nowadays. It is a quiet place by the sea and full of wonderful people inhabiting nearby. Its nearby locations are full of wildlife and domestic animals that seek the attention of nature lovers. The friendly people here would literally make your stay a truly memorable one.

Suggested Read: 9 Best Things To Do In Dambulla To Have Unlimited Fun On Your Vacation In Sri lanka

Also known as the Rama's Bridge or Rama Setu, The Adam's Bridge is a former land connection between the countries of India and Sri Lanka. As per the Hindu belief, this bridge had been created by the god Hanuman with an army of monkeys. It has historical significance too. There is a story behind the making of this bridge, which goes on that Rama had set an army of monkeys to work round the clock to make a bridge to the island redoubt of the demon king Ravana. The bridge is believed to be between Pamban Island and Tamil Nadu, India.

Thrikkuratti Mahadeva Temple is another center of attraction here. It is considered as one of the 5 Shiva temples in the Island where a giant Sivalingam has been carved out of the granite stone in this area. It is believed that the Portuguese had destroyed the temple during their invasion of Mannar in the 16th century. Besides Hindus, people of other faiths too visit the huge temple to spend their quality time. Its location in the midst of calm and lush green area makes it best suitable for exploration.

Further Read: 10 Best Beach Resorts In Colombo Where You Can Experience The True Sri Lankan Culture

Formerly called the Mannar Island, the town of Mannar is a must visit when it comes to exploring the culture when traveling to Sri Lanka. Several such places and especially the 10 discussed above remain the notable ones due to their historical significance. Visitors spend quality times in this area and feel the ascent of the lush green forests where rare animals and birds inhabit. Make sure you engage in most of the things to do in Mannar, Sri Lanka from the list above to experience great fun and unlimited entertainment.

Indulge In Shopping In Thekkady And Carry The Culture Of Kerala Back Home!

Shopping In Diu: A Fun Pocket Guide On What To Shop & From Where!

A Handy Guide For Shopping In Ujjain For That Perfect Retail Therapy!

Iceland In July: A Detailed Guide To Exploring The Land Of The Midnight Sun