White Nights Of Saint Petersburg 2021: Where The Sun Never Sets, And The Fun Never Ends 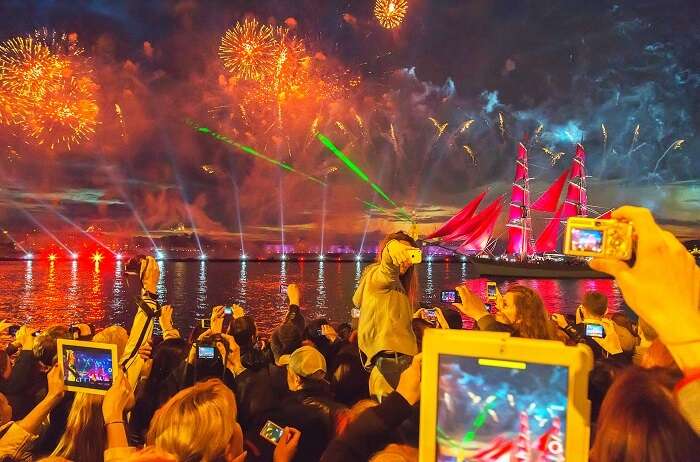 Have you ever imagined how it would feel if the sun never went down that horizon and there was no concept of a sunset? Just like the Northern Lights, the magical and astonishing phenomenon of White Nights attracts millions of travelers from all over the world to countries located near the extreme poles.

However, when it comes to indulging in the festivities of the popular Midnight Sun, the White Nights of Saint Petersburg happens to be one of the major events that no traveler should ever miss on their Russian holiday.

And those lucky travelers who’re visiting the country in the span of next two months, here’s how you can make the most of the world-famous White Nights of Saint Petersburg 2021. Get scrolling!

What Is The Meaning Of White Nights?

Much famed as the Midnight Sun, the White Nights festival refers to the famous natural phenomenon that occurs around the areas near south of the Antarctic Circle, and north of the Arctic Circle during the summer season. Around this time, the sun refuses to set for as long as two whole months. Unbelievable right?

However, the fact remains that in countries like Finland, Iceland, Russia, Greenland, Canada, Norway, and Alaska, the sun lets its light shine on everyone as these regions have extreme latitudes.

What Are White Nights Of Saint Petersburg All About?

While all others celebrate the white nights only as a phenomenon, it is only in St. Petersburg that this natural occurrence is celebrated as a grand fiesta in all its might. Next to Moscow, St. Petersburg is one of the best places to visit in Russia.

From music to movies, from live performances to theatrical acts, from ballet to opera, and from cultural nights to the breathtaking fireworks, one can indulge in true Russian delights at White Nights Festival of Saint Petersburg 2021.

Note Down These Details About White Nights

Must Experiences During White Nights Of Saint Petersburg 2021

The White Nights celebrations at Saint Petersburg continue all through the day, and all night long. However, there are few experiences without experiencing which, attending this festival would be left with no meaning. And amongst the plethora of activities and events that will be held throughout the end of the festival, these three events will be held continuously, and consistently for the whole of two months as they attract majority of the population.

1. Stars of the White Nights – Spot Your Favorite Celebrity

Don’t Miss: A ride in one of the age-old carriages that take the travelers around the park of Peterhof.

Celebrities Spotted At The Past Events: The Scorpions, Paul McCartney, The Rolling Stones, and many more.

2. Long Night of the Museums – Must-Experience For The History Buffs

Considered to be one of the best events for the ardent history buffs and the passionate culture vultures, the event of the Long Night of the Museums is not to be missed at all. While many of the museums stay open all night long during the White Nights Festival, most of them offer special tours only till the midnight. However, one can tour some of the famous museums such as:

3. Scarlet Sails – Once In A Lifetime Experience For All

One single tradition that is as massive as a fiesta in itself, the Scarlet Sails is one of the main events of the White Nights Festival. From the breathtaking fireworks to the fascinating water show, and from the amazing music concerts to the never-ending food scenes, Scarlet Sails is undoubtedly one of the must-visit events during White Nights Festival of Saint Petersburg 2021.

Marking the day of the graduate’s on the weekend of the shortest night of the year, this event starts late in the evenings across many sites in St. Petersburg. However, one can witness the fabulous light, water, and fireworks show only for about 30 minutes post 1 AM at the central Neva Site that stretches from the Dvortsovaya Bridge to Troitskiy. So don’t miss it!

How To Reach St. Petersburg

By Air: Leading airlines like Air France, Lufthansa, Finnair, and more offer frequent services from India to St. Petersburg. While Pulkovo Airport serves as the international as well as the domestic airport of St. Petersburg’s, there are no direct flights from India.

By Train: For the travelers who are traveling from the nearby destinations like that of Tallinn, Moscow, or Helsinki, the high speed trains like Sapsan and Allegro serve as a cheap, convenient, and comfortable mode of transportation to reach St. Petersburg.

By Bus: Traveling by bus to St. Petersburg not only cuts down on your relatively expensive airfare and train fare, but also treats the travelers to the lush green countryside of Russia. It is absolutely a pleasure to travel from the nearby places like Estonia and Finland by bus which happens to be the most cheapest option to reach St. Petersburg.

By Ship: While one has the choice of traveling via ship to the beautiful St. Petersburg, it does not make it one of the most popular choices for traveling till date. It can serve as a romantic experience and an expensive one but on the contrary, it remains the slowest mode of traveling to St. Petersburg with limited options.

Where To Stay At St. Petersburg

From luxury to budget hotels, St. Petersburg offers umpteen number of accommodation options to stay closer to the main attractions, in close proximity to the white nights’ location, and best options that fit every budget.

Where To Eat At St. Petersburg

Bringing all the cuisines under one roof, St. Petersburg offers a great variety of take-away places, upscale diners, and amazing restaurants that will treat your taste buds like none other.

So, Russia on your mind yet?

Restaurants In Russia: 9 Places To Sink Your Forks Into An Extraordinary Culinary Fare

Saint Petersburg Nightlife: Head To These Places To Experience The Best Night In Russia

Trekking In Russia: Discover The Wild Beauty Of The World’s Largest Country!