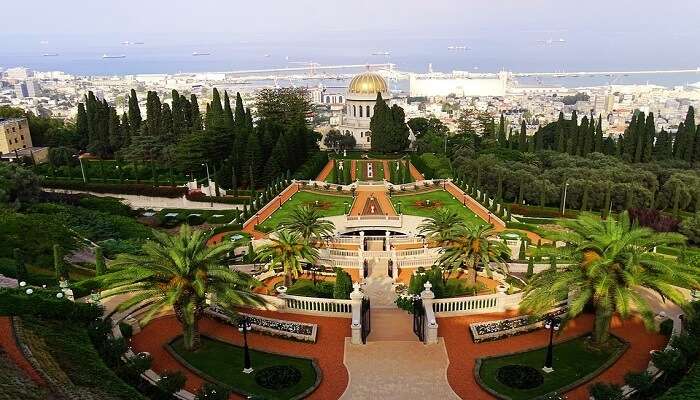 Israel is a small yet precious Middle eastern country comprising plenty of diversified states and cities. One of them is Modern Haifa built beautifully on the slopes of Mount Carmel. It is a famous tourist destination for Baha’i pilgrims and is said to be a UNESCO World Heritage site. Wondering what to do in Haifa? We have got you covered with the most fun things to do in Haifa, Israel. From marvellous architectures to picturesque landscapes of steep cliffs and beautiful sceneries at the beach, it has all. The major highlights of the bustling port town, Haifa is the Bahai Gardens across the Medittarean sea. It is an enhanced and serene place like nowhere else.

Top 10 Things To Do In Haifa

Check out the list of various amusing things to do in Haifa on a fun and adventurous trip to Israel. Read along!

Baha’i Shrine and Gardens is a beautiful holy place located in the heart of Haifa, near Acre in Israel. Shrine of the Bab, the golden domed resting place of Baha i Faith stands on the terrace surrounded by hanging gardens offering landscapes and sensations. The place attracts many tourists because of the serenity and splendid panoramic views of Haifa, over the Mediterraen sea and gigantic galilee mountains.

Must Read: Israel In January 2020: Here’s Everything You Should Know Before You Plan A Holiday

Stella Maris Monastery is a gracious Discalced Carmelite monastery for monks also known as the Monastery of Our Lady of Mount Carmel. It was built in the 19th century on slopes of Mount Carmel in Haifa, Israel. The monastery serving as a Carmelite is dedicated to St. Elijah. Interiors and decors comprises beautiful and vibrant paintings depicting the archaeological aspects of the prophet Isaiah, Ezekiel and Madonna of Mt. Carmel. The holy place has never failed to amuse locals or even travellers.

One of the most fun things to do in Haifa is a ride in the cable cars. It is the best way to reach up the hills to Stella Maris Monastery and other famous tourist places. The cable cars are present at the entry from Hahagana Street at Galshanim Beach in Haifa. At the top of the hill, you will experience the spectacular panoramic views across the city out to the Meddiatrean Sea. It is surely a once in a lifetime opportunity one should not miss out at any cost.

The Cave of Elijah is a grotto where the prophet Elijah took shelter after killing many priest of Baal. It is a prominent place for the Christians, Jews and Muslims. The cave is located on Mount Carmel above the sea level in Haifa, israel. The exact location of the ‘Cave of elijah’ is still not known. It is most picked by travellers interested in being enlightened by the history of a place.

Wandering on the popular beaches notably Bat Galim Beach and Hof HaCarmel Beach is one of the most fun things to do in Haifa. If you are a water sports enthusiast, Bat Galim beach is totally the place for you. It provides various water sports like windsurfing and kiteboarding to the travellers. And if you are seeking a calm and pleasant holiday, rest your bodies at the Hof Hacarmel beach. Both the beaches have cafes offering delicious cuisine and sun protection equipment available on rent.

Suggested Read: 10 Smashing Things To Do On New Year In Israel: Take Your Pick!

Mane Katz Museum is a marvellously built architecture situated at the Yefe Nof street at Carmel center in Haifa, Israel. The complex comprises beautiful paintings and sculptures of Mane Katz largely influenced by Jewish artists. It is a must visit place for art enthusiasts. Another famous museum situated nearby is Tikotin Museum of Japenese Art portraying Japenese artistry.

Suggested Read: Israel Travel Guide: Everything A Traveller Should Learn About The Historically Rich Country

Another interesting thing to do in Haifa is wandering around the slopes of Mount Carmel. The gigantic mountains are an excellent place for day trips with your loved ones. It offers the historical sightseeing of Carmelite Monastery of St. Elijah. As said, during the conflicts of Elijah with the priests of Baal, he set up an altar at the monastery. Other prominent sites from the top of the hill are Elin Hod, Bet Oren and Jerusalem’s Rockefeller Museum.

Suggested Read: 10 Awesome Places For Rock Climbing In Israel You Ought To Visit

If you are travelling to Israel, you can explore Louis Promenade, the most picturesque city walkways in Haifa. It was beautifully built in the late 19th century along the streets of Yaffe Nof.AT the entrance of Bahai Gardens, the city walkway will provide to you splendid views of Haifa bay, Mount Hermon, Acre, and Rosh Hanikra.

Suggested Read: The Best Way To Experience Winter In Israel For A Blissful Vacation!

Ursula Malbin Sculpture Park is an amusing park comprising of beautifully sculptured bronze statues. These prominent statues were made by Ursula Malbin, famous german born artist. The place is the most ideal location to spot or watch locals and learn about their diversified culture and religions.

Suggested Read: 7 Day Trips From Israel To Add A Bit Of Thrill To Your Vacay!

Being aware of the historical events is also listed in the top things to do in Haifa. Caesarea is one of the Israel’s mesmerizing ancient sites. It was constructed in the 4th century BC along the coast between Haifa and Tel Aviv. The complex portrayed precious remains of Crusader city, Roman theatre and remnants of ancient aqueduct. It is a must visit heritage site if you are in Israel.

Further Read: Wildlife In Israel: 10 Best Places You Must Explore For It

If you are someone who is willing to acknowledge the ancient history in the context of world’s most recognized identities at one place, then Haifa in Israel is the perfect destination for you. Book a trip to Israel and sink into the past while exploring all the fun things to do in Haifa.

8 Fascinating Things To Do In Vadodara In 2020 That Let You Taste The Good Life In Gujarat!

Verinder’s Family Tour In Andaman Was Exactly What He Had On His Mind For A Beach Vacation!

4 Things To Do In Chilaw, Sri Lanka That Are Reasons Enough To Visit The Town