Vadakkunnathan Temple: Everything You Need To Know About This Popular Temple 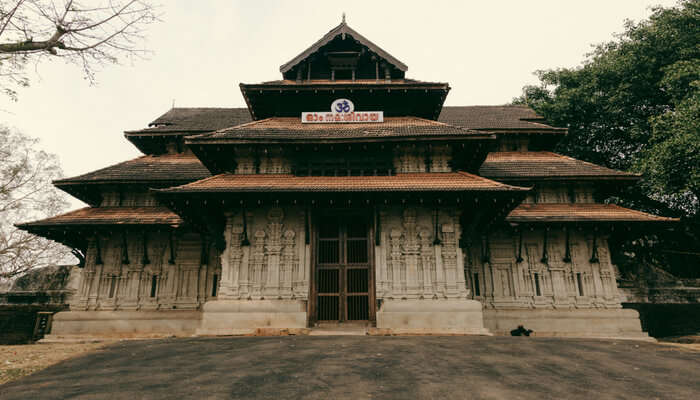 The temple is situated on the hill lock which is around a large stone And share is an area of 9 acres. The entrance of Vadakkunnathan Temple is facing north, east, south, and west which comprises four gopurams. The entrances are the four massive gateways and have a ball around the temple that reflects the skills and craftsmanship of constructing the place. There are main shrines of Vadakkunnathan, Shankaranarayan and Lord Rama. The entrance of the left has copper plates on the sloping roofs and also the theatre.

There is also an old museum that is present inside the Vadakkunnathan Temple, which reflects the culture and art of Kerala. There are various wall paintings, wood carvings and different magnificent art pieces that are preserved in the museum. If you are visiting the Vadakkunnathan Temple, you must go to the museum to know more details about it. There are times when the temples are very crowded as especially on the festival days. On the Maha Shivaratri, lakhs of lambs are being lit, and it is one of the most magnificent views inside the temple.

If you are visiting with your friends and family, make sure that you wear a perfect Indian wear attire to visit the temple. As there is a strict dress code, you need to make sure that you respect the tradition and culture by entering the temple. There are various festivals apart from the main festival in Maha Shivaratri, Thrissur Pooram Which is celebrated from April to May.

The celebration lasts till 36 hours and includes the joyous occasion where there are fireworks shows at the temple. There is an annual festival called the Anayoottu Festival which involves feeding the elephants and one of the major festivals of Vadakkunnathan Temple. Various elephants which are placed in the crowd where people feed them and worship. In this festival different devote come from all parts of the country to seek the blessings of Lord Shiva. One must visit this temple which is known for its magnificent beauty and faith to get answers to all your wishes.

The temple is 1000 years old, and it reflects the culture and tradition of Kerala. Its architecture and various paintings indicate that the temple is extraordinary. The husband and wife, Shivaguru and Aryamba had born with the child Guru Adi Shankaracharya after lots of prayers which was done to God Vadakunathan. Later on, Lord Shiva had come in the dream of both husband and wife. In the dream, Lord Shiva gave two options to the couple, which was the first being an ordinary son who will live a healthy life and the second one was an extraordinary son who will die early. The couple chooses the second option, and they named him Adi Shankara. This is one of the most interesting histories of Vadakkunnathan Temple and the child got freedom and got ‘Videha Mukti’ in the Vadakkunnathan temple itself. It has an interesting history and known for purity which the temple has spread all over Kerala.

Summer (from March to May): In Thrissur, the summer season starts from March and ends in May. The minimum temperature is about 30°C, and the maximum goes up to 38°C. One can enjoy the summer and Especially the festival called Thrissur Pooram is held in this duration. It is one of the perfect times for indoor activities if you are visiting Vadakkunnathan Temple in this duration.

Winter (from December to February): Weather in Thrissur is quite pleasant in winter which starts in December and ends in almost made in February. The temperature is always between 22°C to 30°C. The climate is meant for going outside and enjoy nature. Especially the nearby places of Vadakkunnathan temple. It is the peak season and tourists are attracted to Thrissur in this time.

Monsoon (from June to September): The monsoon in Thrissur starts from June and goes on till September. There is heavy rainfall in this duration and especially in July. One can visit here in monsoon for enjoying the rains, and some travelers come from different parts of the country to enjoy the water Falls and temples at this time. Monsoon is not a peak season, and one can get accommodation and take kids at a cheaper rate.

Suggested Read: 35 Amazing Things To Do In Kerala For An Incredible Holiday In 2021!

Vadakkunnathan Temple in Kerala is known for its architecture, festivals, ancient paintings and also the rituals which are performed unique and known for its tradition. One must visit the Vadakkunnathan Temple in April to May as there is the Thrissur Pooram was held in this duration. One must visit the temple as it was built in the seventh century and known for ancient temples in Kerala. When can visit here throughout the whole year, but its annual festival celebration called Annayoottu is festooned amazingly.

Suggested Read: Winter In Kerala: 6 Best Places To Visit For A Blissful Vacation In 2021

How to reach Vadakkunnathan Temple

The temple is situated in the middle of the city, and you can easily reach there by cabs or auto rickshaws whichever options are suitable for you. There is the railway station which is situated almost 2 km from the temple and if you are coming by the airport distance from the airport to the temple is about 50 km. Travelling is convenient for all three transportation. If you are coming from Mumbai, Chennai or Delhi, there are well-connected options too.

if you are coming by air, then you have to reach Kochi international airport which is that Nedumbassery that is at a distance of 53 km. You can quickly get cabs or public transport to reach the temple.

As all the trains are available directly to the Kerala one can quickly get a connecting train via Thrissur Railway station. It is the nearest railway station, and the temple is about 3 km away from it.

Thrissur is connected to all parts of Kerala, and you can easily plan a road trip coming through Tamil Nadu and Karnataka. It is quite convenient also, and one can easily enjoy the scenery while reaching the temple.

Suggested Read: Kerala In November 2021: Places And Events Not To Be Missed Out

Places To Visit Near The Vadakkunnathan Temple

After visiting the Vadakkunnathan Temple, there are also some places nearby which you can spend your day.

Guruvayur Temple Is located in the town of Guruvayur, and it is one of the most sacred hubs of a pilgrim in Kerala. It is one of the most magnificent temples in South India where there is a deity Lord Vishnu who is worshipped in Balakrishna avatar. The Lord Vishnu appears with a garlanded Tulsi or basil and also an appalled necklace. This temple was created by the gods, the God of winds and Guru. There might be long queues from the entrance, but lots of devotees come with good faith and belief. One can come with friends and family to seek the blessings of Lord Krishna. Temple is only 27 km away from the Vadakkunnathan Temple, and it is located in Thrissur district.

Peechi dam is 21 km away from the Vadakkunnathan Temple if you are interested in one of the most scenic destinations in Thrissur district then you must visit this dam. There are transportation is available both private and public, and one can easily enjoy the fantastic nature and of course, the barrier.

Vilangan hills are situated At almost 9 km away from the Vadakkunnathan Temple. This is one of the favorite picnic spots for family and friends where one can quickly enjoy the nature and magnificent view from the hill. One can enjoy the panoramic view of the Thrissur city, and it is also referred to as the oxygen jar of the town. One must come here with family and friends, and the hill is closed by 6:30 PM.

Suggested Read: Munnar In December: A Pocket Guide For A Tour Down This Charming Kerala Town

The waterfall is 60 km away from the Vadakkunnathan Temple. And if you want to enjoy one of the largest waterfalls in Kerala, then you must visit Athirappilly waterfalls. It has a height of about 80 feet, and it is at the entrance to the Sholayar ranges. One must visit here if they are waterfall lovers and it will give you one of the most amazing experiences. One can easily enjoy with their friends and family by visiting here. There is public transportation available too.

Suggested Read: Kerala Cuisine: What Makes The State The King Of Culinary Art

Image Source
The temple is located at the 21 km of distance in Thrissur. The temple is known for its architecture, and it is one of the most ancient temples in Kerala. It was built in the 15th century, and it is dedicated to Lord Bharatha who was the brother of Shri Ram. People come here with belief and faith, and they say that in case if they have the most dangerous diseases, then they must visit this temple for a cure.

Further Read: Periyar National Park In Kerala: Guide To A Day-Tour In The Sanctuary

If you have any plans of taking your family on a religious tour, then plan a trip to Kerala and do not miss out on the famous Vadakkunnathan Temple on your trip.

Who was the creator of the Vadakkunnathan Temple?

The creator of the Vadakkunnathan Temple was Parashurama.

How old is the temple Guruvayoor?

What are the timings of the Vadakkunnathan Temple?

What is the story behind naming the city Thrissur?

Thrissur is the short form of Thrissivaperur, which is known as the town of Lord Shiva.

Why is the Vadakkunnathan Temple famous?

It is the architecture of Vadakkunnathan Temple, which is magnificent, and you make, also the rare murals, ancient paintings, wood carving.

What is one of the famous festivals which are celebrated at the Vadakkunnathan Temple?

During Shivaratri, the temple is lit up with lakhs of lambs. The festival is also known as LakshaDeepam.

Netherlands In November 2021: A Guide To Enliven Your Spirits In This Gorgeous Country