15 Airports In Japan For A Safe Touchdown In The Land Of The Rising Sun! 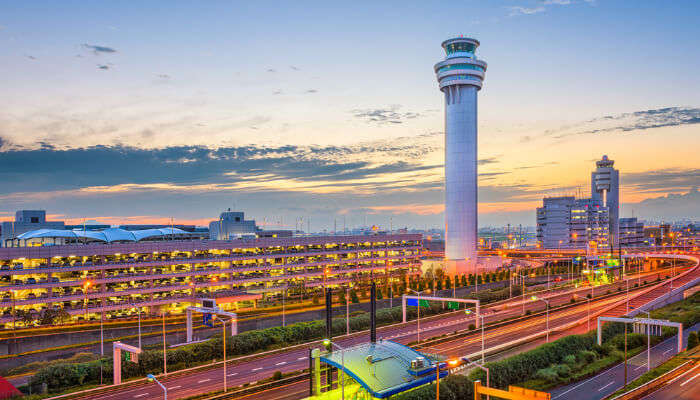 Although touching the high sky with its modernity, Japan is deeply rooted in its traditions and follow the culture as always. Due to its gleaming castles and ancient shrines, Japan has attracted a number of tourists every year. As a result, the country is well-connected with other countries via roadways, railways, and airways. Japan airports cater to both domestic and international flights which makes commuting fairly easy for travelers. Check out some of the top airports in Japan that provide the best facilities to its travelers and welcome them with the warmest smiles.

Here is a list of 15 well-equipped airports in Japan that offer the most comfortable experience to the travelers. You will never be able to forget about the experiences there and will be hooked with their service quality. 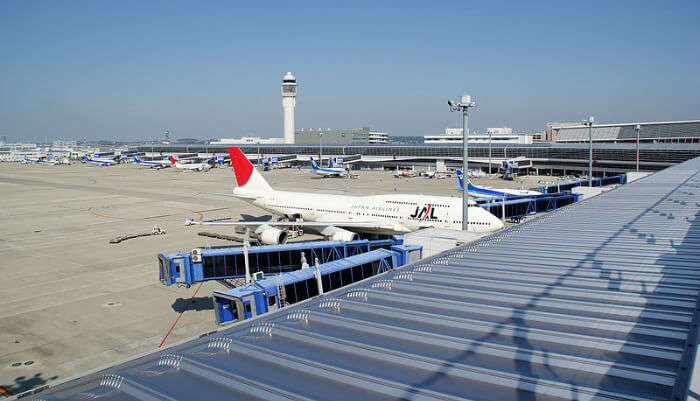 Counted among the best airports in Japan, Chubu Centrair International Airport is located Ise Bay, an artificial island. It is classified as a first-class airport and the chief international gateway to the Chubu region. Some of the operating airlines here are AirAsia Japan, Air China, Japan Airlines, Jeju Air, Lufthansa, Shanghai Airlines, United Airlines, and Vietnam Airlines among others. With so many options to choose from, you can easily reach the ‘Land of the Rising Sun’.

Must Read: 10 Water Parks In Japan Your Family Will Surely Love To Spend Time At! 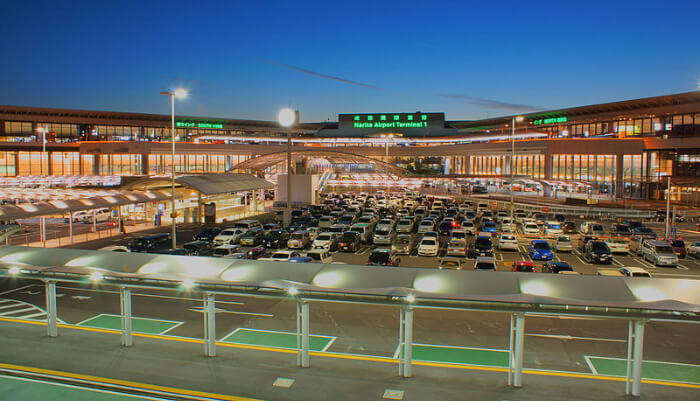 Also popular as Tokyo Narita Airport, this international airport in Chiba is situated around 60 kilometers away towards east from central Tokyo. It is one of the busiest airports in Japan and handles about 50% of the total passenger traffic and more than 60% of its international air cargo traffic. Due to its 4000-meter runway, the airport shares the record of the longest runway in Japan with Kansai International Aiport on the second position. 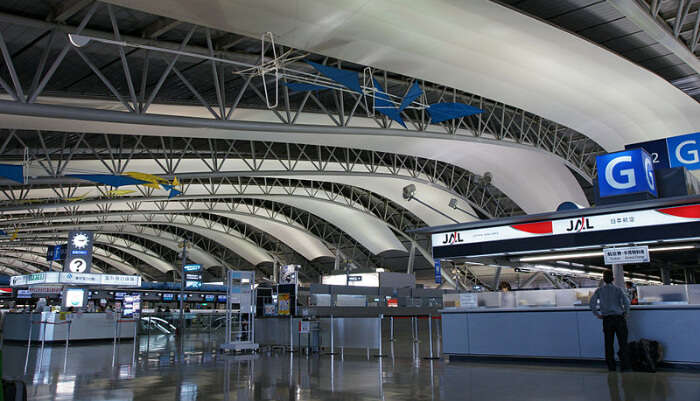 Opened in 1994, Kansai International Airport is nestled in the center of the Osaka Bay. The sole purpose behind the construction of this airport is to relieve the crowd at the Osala International Airport. This is the longes airport terminal and was designed by Renzo Piano, an Italian architect. It handles hundreds of flights and is now one of the busiest hubs in Japan. 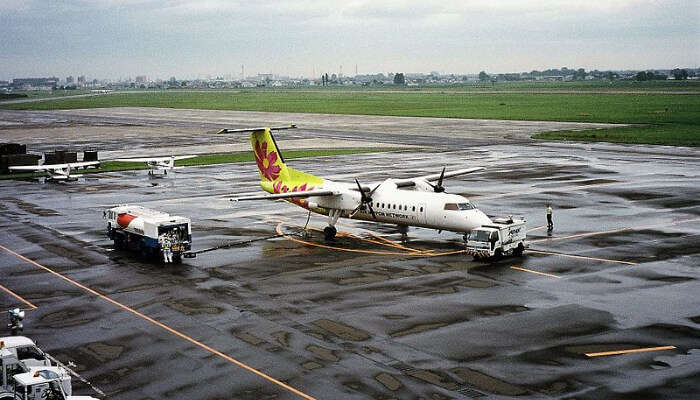 Built between 1942 and 1944, Okadama Airport is one of the oldest airports in the country. The services of this airport are limited to turboprop flights to cities in Hokkaido. It is also used by general aviation operators and the Japan Self-Defense Forces. The online operating airlines at this airport are Fuji Dream Airlines and Japan Airlines.

Suggested Read: 25 Unbeatably Fun Things To Do In Japan That All Travelers Must Try In 2022 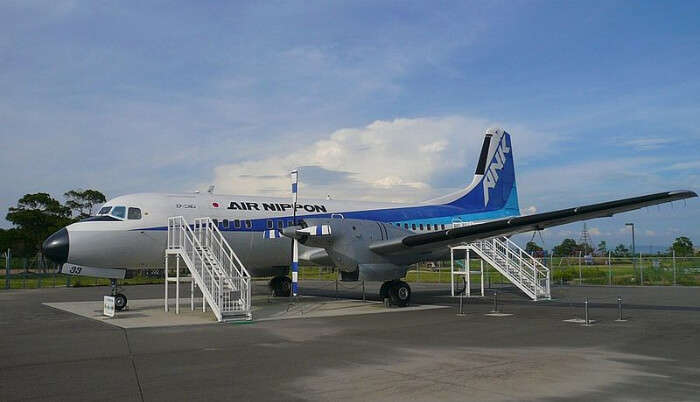 Saga International Airport is located in the Kawasoe area of Saga Prefecture on the edge of the Ariake Sea. The airport was developed after studies and approval of the governor of Saga Prefecture and started functioning from the year 1998. Some fo the working airlines at this airport are All Nippon Airways, Spring Airlines, Tigerair Taiwan, and ANA Cargo. 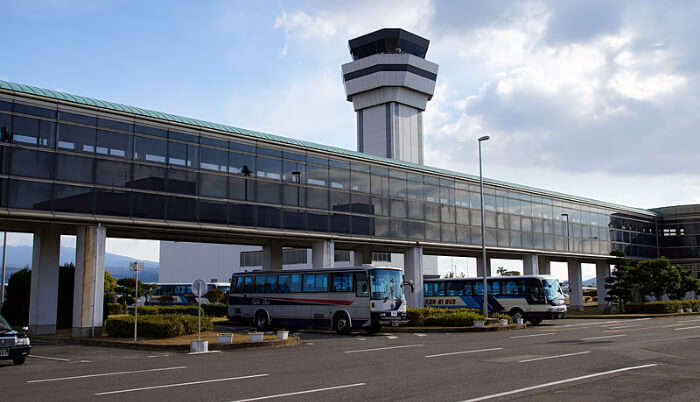 Positioned 4 kilometers west of the railway station in Omuro, Nagasaki Airport is an international airport. The terminal and runway are on an island, whereas, the shorter runway is one the mainland. Air Seoul, All Nippon Airways, Japan Airlines, Jester Japan, Peach, Oriental Air Bridge, Skymark Airlines, and Solaseed Air are the main airlines operating here. 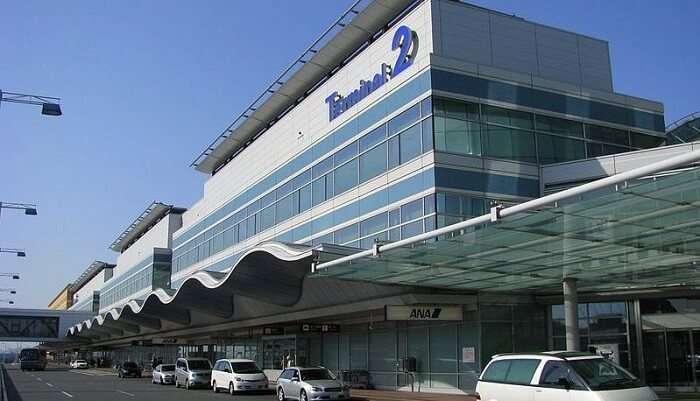 Popular as Haneda Airport, it is one of the two major airports in Tokyo and was the primary international airport until 1978. It handled almost all the domestic flights from and to Tokyo due to which it was considered as one of the best domestic airports in Japan. Several airlines operate at this airport including AirAsia X, Air China, American Airlines, British Airways, Emirates, Japan Airlines, Lufthansa, and many more.

Suggested Read: Monsoon In Japan: Enjoy The Rains In Japan Alongside Sushi And Ramen! 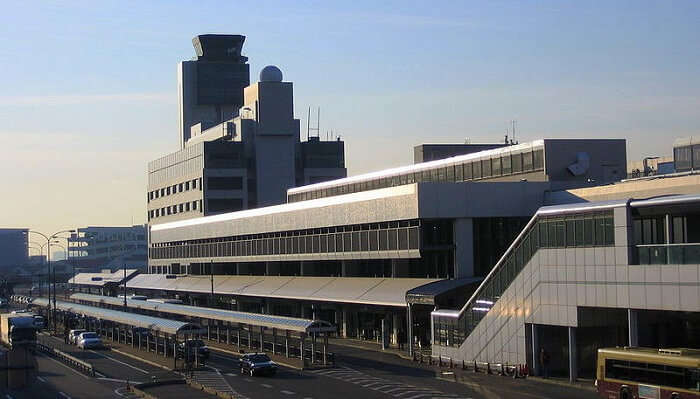 Osaka International Airport or Itami Airport is a first-class airport in the Kansai region. Despite its international tag, it only serves as a domestic airport only. The international traffic was taken over by the Kansai International Airport in 1994 and now competes for domestic flights. In 2006, this airport was the third-busiest airport in Japan. Some of the top airlines operating at this airport are All Nippon Airways and Japan Airlines. If you wish to travel from one city to another within Japan then this is the best option you can choose from.

Suggested Read: 10 Alluring Lakes In Japan That Look Like They’re From Another World! 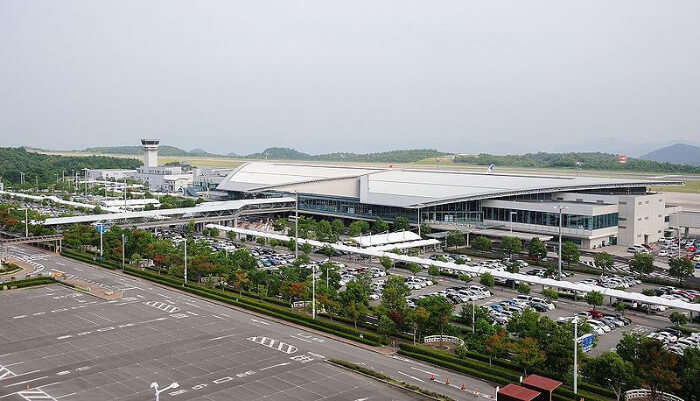 The old Hiroshima Airport was situated in a waterfront location and was too small to handle wide aircraft. As a result, the new Hiroshima Airport was constructed in 1993 as a replacement for the old one. Almost 80% of the traffic is received from the Haneda Airport in Tokyo which is one of the main airports in Japan for international flights. Air China, Air Seoul, China Airlines, Japan Airlines, and HK Express are some of the major airlines operating at this airport. 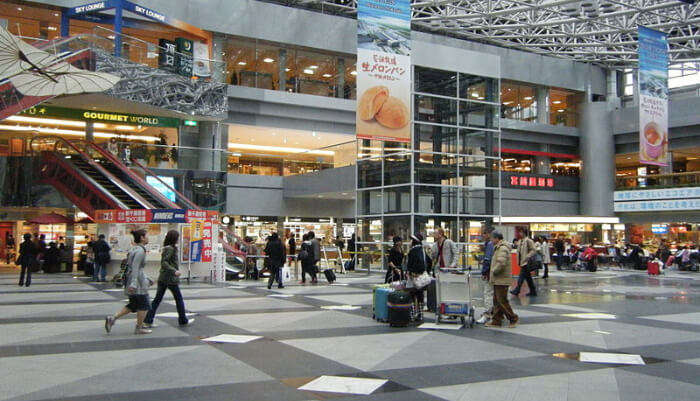 Located 5 kilometers southeast of Chitose, this airport serves as the largest airport in Hokkaido both by land area and traffic. In 2005, New Chitose Airport was the third-busiest airport, after Haneda and Narita, and has now dropped to the fifth position. Some of the best airlines operate here including AirAsiaX, Air China, All Nippon Airways, Hong Kong Airlines, Singapore Airlines, Korean Air, and many more.

Suggested Read: Japan In May: Explore The 10 Most Exciting Activities Japan Offers In May 2022 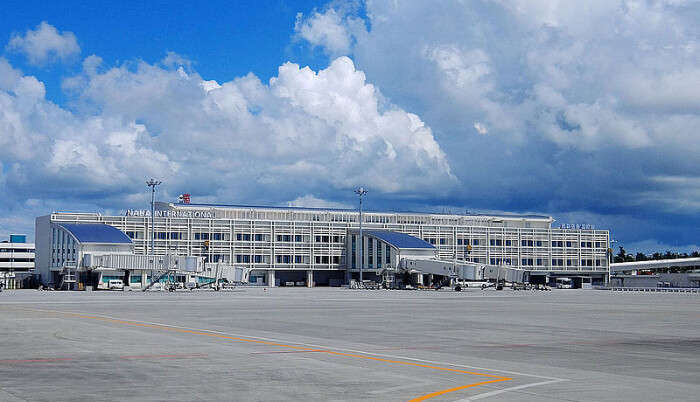 Positioned just 4 kilometers west from the city hall in Naha, this airport is the seventh busiest airport in Japan. It is also an airbase for the Japan Air Self-Defense Force and the main cargo traveling from and to Okinawa. There are four terminals in this airport namely, Domestic Terminal, New International Terminal, LCCT Terminal, and Cargo Terminal.

Earlier known as Itazuke Air Base, Fukuoka Airport is both international and domestic airport that is situated just 3 kilometers east from the Hakata Station. It is the chief airport on Kyushu Island is the fourth-busiest and one of the cheapest airports in Japan. There are scheduled bus services from the airport to the Tenjin area and Hakata station. 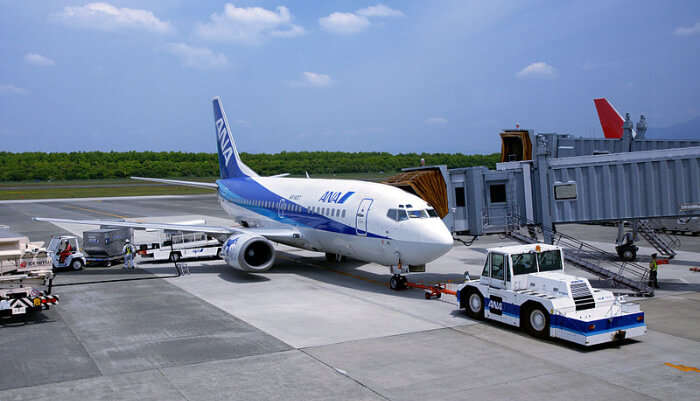 Kumamoto Airport was constructed in 1960 on the former airbase – Imperial Japanese Army. In 1971, the new airport was built and the runway was extended in 1980. It is considered as one of the major airports in Japan as Kumamoto Airport is one of the three nationally owned airports that gained profit in the fiscal year 2011 along with Komatsu Airport and New Chitose Airport. 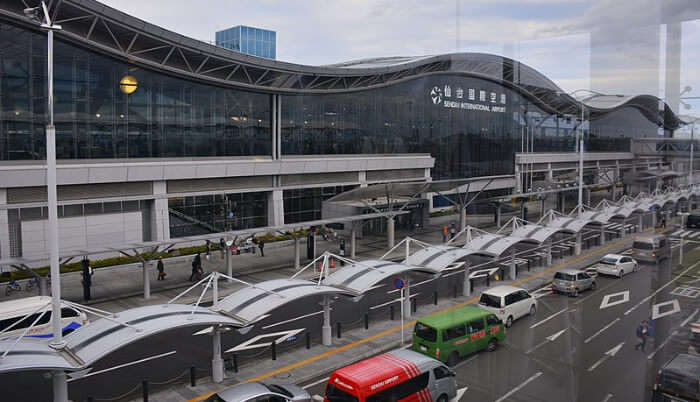 Located in the Natori city, Sendai Airport is around 14 kilometers southeast of Sendai. Earlier, the airport was built by the Imperial Japanese Army as a training center for the Kumagaya Army Flight School and was popular as Masda Airfield and Natory Airfield. After the First World War, the center was revamped and converted into an airport with the extended runway. 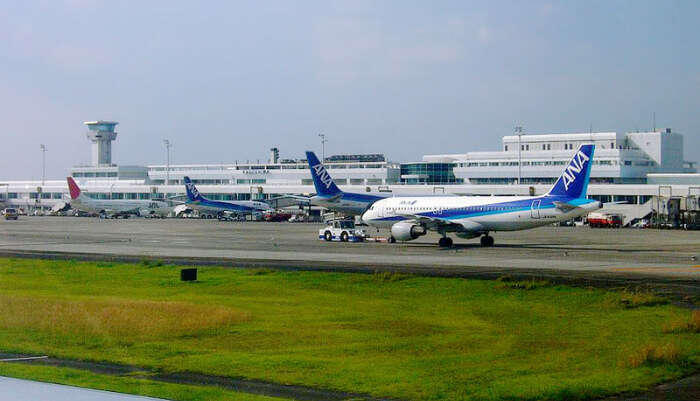 Kagoshima Airport can be found around 30 kilometers away in the northeast direction of Kagoshima-Chuo Station. After Fukuoka Airport, this is the second-busiest airport in Kyushu. In 1972, it replaced a former Imperial Japanese Navy airfield near the city center and served as the primary airport since 1957.

Further Read: Snorkeling In Japan: 13 Best Spots For Experiencing This Water Adventure In The Japanese Waters In 2022!

These are some of the major and busiest airports in Japan that handle a good number of passengers every year. So, there is no dearth of airport facilities in this country and any city in Japan can be reached easily via transport facilities. These airports help to have a hassle-free vacation along with a safe flight extra facilities for the passengers on the airport premises. Have a relaxing getaway to Japan and enjoy the services offered by these airports.

Which are the famous international airports in Japan?

Which are Japan’s leading airlines?

The leading airlines of Japan are Japan Airlines (JAL) and All Nippon Airways (ANA).

Which airport is near to Tokyo?

The airport which is near to Tokyo is Haneda Airport. The distance between both the places is around 29.3 kilometers and it can be covered in around 37 minutes.

Which is the busiest airport in Japan?

What facilities are available at Narita Airport in Japan?

Which are the most popular airlines to fly to Japan?

Which is the best airport in Japan?

Narita International Airport is considered the best airport in japan due to its services, infrastructure, and facilities.

Which airport is the biggest in Japan?

Narita International Airport is the biggest airport in Japan. It is spread over an area of 60km in the eastern part of central Tokyo.

How many airports are there in Japan?

Which is the most expensive airline in Japan?

Japan airlines (JAL) is the most expensive airline in Japan. You can avail of separate compartments with a personal 23inch TV screen.

How many airlines does Japan have?

There are a total of twenty-four airlines in the country. Japan has both domestic and international airports. Japan also has charter airlines.

Which is the main airline of Japan?

Japan Airlines is the largest and the main airline of Japan. It is the busiest airline. It has international services as well as domestic services. It has the maximum number of aircraft.

Which airplane in Japan provides the best service?

Japan Airlines provides the best services to its customers.

Can I get accommodation facilities near airports in Japan? 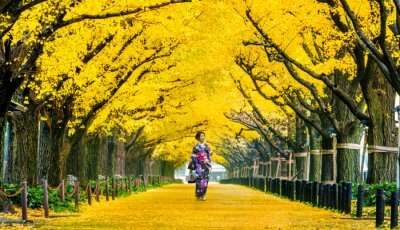 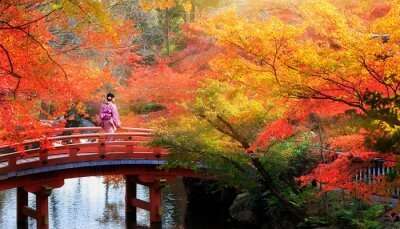 Kyoto In November 2022: A Detailed Guide For A Trip To The Land Of Cherry Blossoms 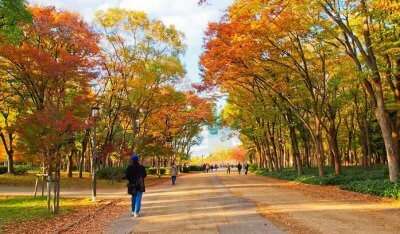 Osaka In November: A Guide For An Ideal Vacation To The ‘Land Of The Rising Sun’!