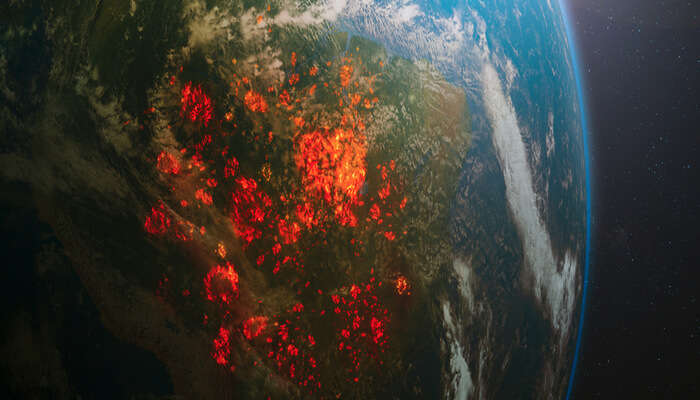 Amazon rainforest, an ecosystem on which the whole world depends is being ripped through the record-breaking fires. Thousands of fires are burning the southern areas of the Amazon, resulting in the formation of a blanket of smoke and soot affecting wildlife and the downwind settlements. According to the National Institute for Space Research of Brazil, there have been over 72,843 fires in Brazil since January 2021 which means that more than one-and-a-half soccer fields worth of rainforest are being annihilated every minute. Read more to know the latest updates on Amazon fires.

Amazon rainforest is a moist broadleaf tropical rainforest that covers most of the Amazon basin of South America. The Amazon basin comprises 7,000,000 km2 out of which 5,500,000 km2 area is covered by the rainforest. The rainforest spans eight countries, namely Brazil, Peru, Bolivia, Colombia, Ecuador, Venezuela, Suriname, Guyana, and French Guiana. Nearly 60% of this rainforest is part of Brazil. The World Wildlife Fund notifies that, Amazon is home to one in ten known species on the Earth and comprises half of the planet’s remaining tropical forests.

Why Is The Amazon Rainforest Burning?

An unusual number of fires have seethed throughout Brazil which escalated in August. This year the number of fires is nearly 80% more than the last year. According to the experts, deforestation and a practice called slash-and-burn are the major cause of this fire. The practice of slash-and-burn has been criticized earlier too as the people cut down patches of forest, allows the area to dry out and later use the area for agriculture and other purposes. As Brazil is the biggest exporter of beef, to replenish the soil and encourage the growth of pastures for cattle, individuals might also set fire.

Cathelijne Stoof, coordinator of the Fire Centre at Wageningen University in the Netherlands said, “These are intentional fires to clear the forest.” He further mentioned, “People want to get rid of the forest to make agricultural land, for people to eat meat.”

How Severe Is The Fire This Year?

This year the number of fires burning across the Amazon is the highest since 2010, which was a bad year of drought. According to the reports, by last week nearly 7000 square miles of the forest was in flames, which is merely smaller than the size of New Jersey.

Research by National Geographic says that fires have been worse in the past too as deforestation was more acute then. The deforestation of Amazon peaked in the late 90s and over 10,000 square miles of the forest could be cut down in a year when fires were abundant and widespread.

Why Is The Amazon Rainforest Important?

The health of the Amazon impacts everyone on this earth. As the trees of the Amazon rainforest take in carbon dioxide and release oxygen, it plays a vital role in pulling planet-warming greenhouse gases out of the atmosphere but as the rainforest is eaten away by agribusiness, mining, and logging, the situation is changing today.

Scientists have been warning that the rainforest might reach a tipping point and will no longer sustain itself as a rainforest. This means that it will not be able to soak up carbon as it does now.

Who Is Fighting Amazon Fires Now?

According to the reports by USA Today, the Brazilian government has sent 44,000 troops to help the local firefighters. G7 countries have planned to release $22 million for the relief. The government is making sure that the funds are used for bringing more firefighting planes.

How Can We Help In Protecting Amazon Rainforest?

The following are the steps that will surely help in saving the Amazon and other rainforests in the world:

The Rainforest Alliance is open to donations. They are emphasizing on spreading awareness and conducting educational programs to educate people about being helpful in this global issue. Cattle are responsible for 41% of all greenhouse gas emissions which is produced by livestock. These cattle are reasons for cutting down vast swaths of the Amazon rainforest. CNN media suggests to cut down the consumption of animal products esp. Beef to avoid similar incidents.

Where is the Amazon Forest located?

How much area does the Amazon rainforest cover?

The Amazon basin comprises of 7,000,000 km2 out of which 5,500,500km2 is occupied by the Amazon rainforest. Nearly 60% of this rainforest is in Brazil and it is home to ten known species on the planet apart from it comprises half of the planet’s remaining tropical forests.

Deforestation, the practice is known as slash and burn and the changes in climate and temperature are considered to be the major reasons for the fire. Apart from this, Brazil is the greater exporter of beef so to replenish the soil, as well as the growth of pasture, might have led to this fire.

For how long Amazon rainforest is burning?

Is the Amazon rainforest still burning?

The major fire has been prevented in the last few months but the effect of the fire is still on.

Why Amazon rainforest is important for us?

The Amazon forest is important to us because it helps in reducing the greenhouse effect by releasing the maximum amount of oxygen and absorbing the carbon dioxide from the air.

What steps should be taken to protect the Amazon rainforest?

How much of the Amazon forest has been burnt?

As per the report of July, approximately 7200 square kilometers of the Amazon Rainforest has been destroyed due to fire. The fire was in much control after that but then also the loss is too much that needs to be compensated.

Rejoice Travelers! IRCTC’s New Rules For Ticket Booking Is Going To Change The Way You Travel!

At Over 19,300 Feet, This New Road Beat Khardung La As ‘The Highest Motorable Road In The World’

The Glass Beach In Russia Turns Empty Beer Bottles Into A Stunning Kaleidoscope Of Colourful Pebbles!