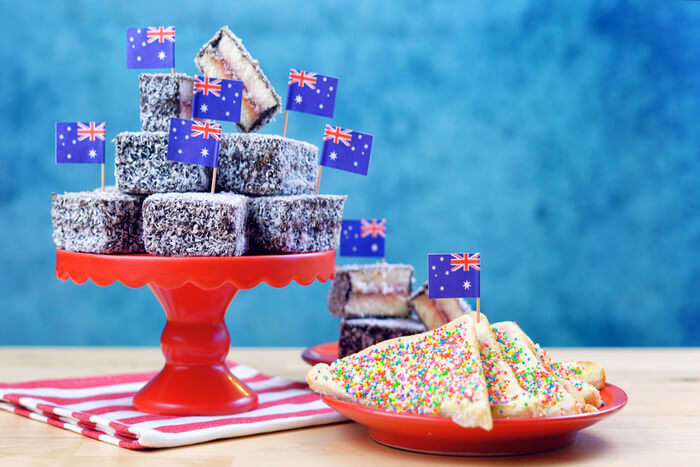 It’s not the perfect visit to Australia without different essentials, which especially means the backyard BBQ, afternoon swims, sunshine, and the iconic Aussie desserts & sweets. As much as Australia is recognized for its different barbecues rather and its scrumptious baking styles, it is also known for a wide range of conventional sweets and the best Australian Desserts.

Using the simple and mouth-watering ingredients that usually hark-back to the British tradition, such as sponge, cream, chocolate, caramel, and jam are the exclusive little flavors and treats that may not be as striking as the delicate and tasteful French tart. Australia, the hypothetical ‘deadly’ nation where each individual is either elsewhere to taste, chase, or bite you. Even though many Australians are recognized for eating the prawns and Vegemite on Barbie, but there are also numerous types of delicious Australian desserts and sweets to be enjoyed.
Now the question is what is Australia’s favorite dessert? There are many types of Australian desserts that individuals love to eat. From different iconic and yummy Tim Tams to many of Australia’s secret dessert techniques, Aussies identify how to get pleasure from the sugary treat, which tastes and flavors just as superior as they sound. And there are many cafeterias and restaurants that are known for their Australian desserts such as La Renaissance Café in Sydney, Dojo Bakery in Braidwood, Lune Croissanterie, The Rolling Pin Bakery, Choux Patisserie, and many others that offer a bunch of sweet dish to their customers.

Whether it is ricotta brownie and ripper jaffa or the delicious Golden Gaytime slices – these iconic Aussie desserts and sweets are not to be neglected in any case. Feast your worthy eyes on the list of Aussie’s most excellent desserts, spreads, and snacks that gives more pleasant taste and flavors. Thus, discover these top 10 Australian desserts that have an ultimate and appetizing burst of flavors and some quite enormous stories behind a few of them such as:

Pavlova is the ultimate, mouth-watering and one of the best among the traditional Australian desserts. Cased in the delicate meringue, marshmallow-soft from the inside and crisp from outside, topped with the layer of fresh fruit and whipped cream. The dessert was named with the Russian ballerina Anna Pavlova in the 1920s. The fruit products used in the dessert varies from passion fruit, kiwi fruit, berries, and mango.

Must Read: Visit These 10 Uninhabited Islands For A Trip Of A Lifetime

The caramel slices, currently a clip in different bakeries all around in the country and foremost appeared in the cookery book released in the 1970s. This dessert is full with a yummy base of thick biscuit, a wide layer of soft and buttery caramel plus an outside layer of rich and dark chocolate. The caramel slice is simple but tasteful. Best served cold.

Enthused by the lamington, this version of dessert is more similar to the whoopie pie however with the delicious and signature tastes of chocolate, jam, and coconut. Who can refuse a slice of this when it has got all the good things? Just look at the picture above. Will you not be tempted to cut out a slice for you. The first layer of jelly plops when you cut through it with your spoon.

The Lamington and marshmallow mousse trifles are the most favorable dish for the kids. The great combination of lamington fingers and the marshmallows offers a robust and appetizing flavor to this dessert and trifle for kids.

The iconic and delicious Tim Tam is known all over the world. Featuring with two dark chocolate burst biscuits sandwiched mutually with the layer of creamy layer of chocolate. There are a diversity of cream flavors to be enjoyed such as white chocolate, salted caramel, and double layered chocolate along with the original flavors.

Chocolate crackle is made up of the cocoa, coconut oil, sugar, and the Kellogg’s Rice Bubbles, which are mixed appropriately in a big bowl, then lumped in the pie cake cases, and put in the refrigerator. They might not be alluring, and they might be frequently restricted to the kingdom of kid’s birthday parties, but they are also known as best to try Australian dessert.

Giant Picnic cake is just similar to the delicious chocolate bar which is a gigantic mouthful of nutty, chewy, caramel, creamy goodness, but through the addition of plenty of cake inside it! For those who love cakes will not have enough of it. They just cannot stop at one slice when it has got all the good things inside.

A very well-liked picnic and birthday party Australian dessert plus snack are known as the Aussie’s fairy bread. This beautiful and sugary base is not simply colorful but also yummy, regardless of simply look like the colored sugar on the bread. Also, it is butter tarnished across the white bread plus by adding the colored sprinkles, this dish is well-admired by the little ones as well as by the Aussies of all ages.

A well-kept top secret from all over the world is the New Zealand and Australian dessert, the delicious jelly slice. The jelly slice consists of three attractive yet appetizing layers, such as jelly, sugary custard, and cream on the biscuit. This Australian dessert is occasionally completed with fresh and natural extracts of fruit topping which generally matches with the color of jelly. For instance, mango jelly layers are yellow and orange in color, whilst strawberry jelly layers are red and the most appetizing.

The iconic Aussie dessert, the delicious lamington, has been admired since the starting of the 20th century. Now, it is established in kitchens and bakeries all across the nation. Featuring a feathery sponge cake which is generally dipped in the melted dark chocolate enclosed in dried coconut on all the sides. The lamington is the best Australian dessert that can also be well-liked with the appetizing layer of cream and jam.

This cake is all time favorite dessert of Aussie people. This cake is generally filled with cream and banana extracts. This elegant and delicious pavlova is a must-try Australian dessert. Not only it tastes good, but it also looks great. When you look at this dessert, you will definitely be tempted to taste it. And, you would want to lick off all the whipped cream on top.

Further Read: Drop Everything And Head To These 9 Islands Near Australia Now

What is the national dessert of Australia?

Pavlova, is the national dessert of Australia.

Best Street Food In Kolkata: 15 Dishes You Must Try In The City Of Joy In 2021