10 Most-Photographed Beautiful Streets In Barcelona That You Must Visit 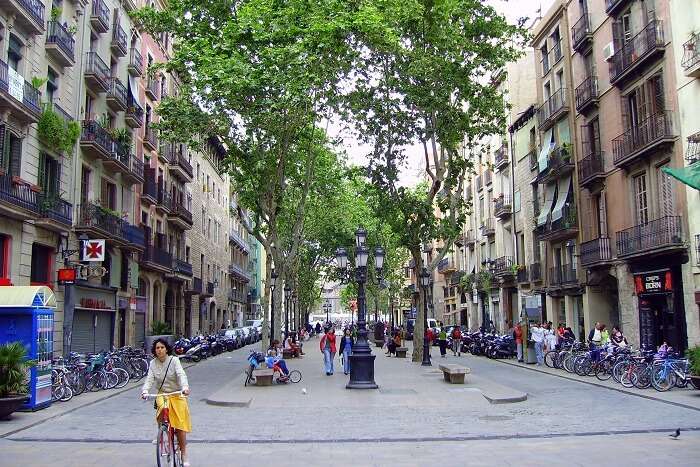 Barcelona is a stunning Spanish city, known for its grand architecture, monuments, heritage, and age-old traditions. The museums, churches, and palaces are as spellbinding as the shopping arcades and public squares. And not to miss the beautiful streets of Barcelona, which are the most significant icons of the city. From streets that are lined with shops to slightly tranquil alleys, Barcelona houses fascinating avenues.

Barcelona has spectacular alleys. They’re always buzzing with people. Some of them are tranquil. Check out these 10 beautiful streets in Barcelona on your trip: 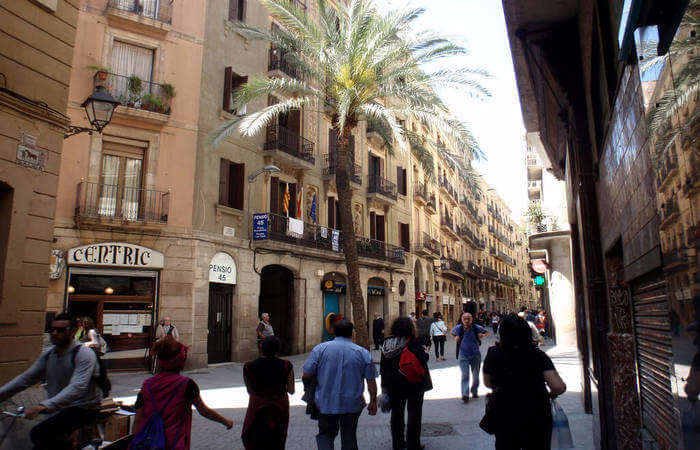 Image Source
More than 700 years old, Calle Tallers is a narrow pedestrian street. Located near Las Ramblas, Plaza Catalunya and MACBA museum, Calle Tallers is regarded as one of the oldest cities in Barcelona. With colorful vintage houses, cobblestone pavements and shops, the lane reflects medieval charm. People mostly flock here to relax, unwind and check out some vintage shops and restaurants.

Must Read: Barcelona In Winter: A Complete Account To Help You Plan A Wintry Spanish Spin 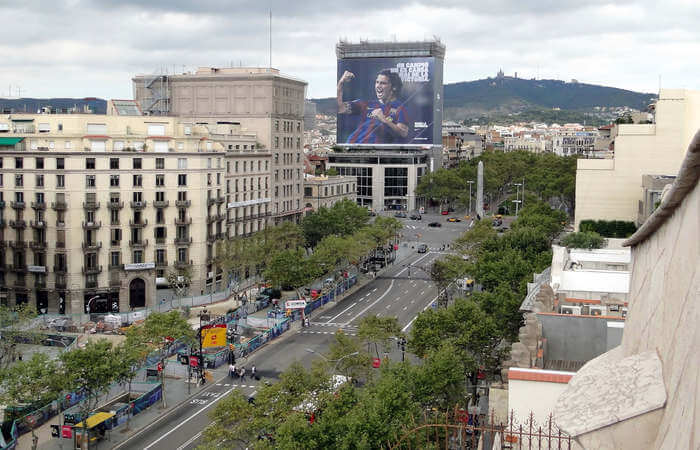 Image Source
Stretching from Gracià neighborhood to Plaça Catalunya, Passeig de Gracià is a wide avenue which is always buzzing with tourists. This is among the most popular central streets of Barcelona city and surely, one of the most spectacular ones. Passeig de Gracià is adorned with Gaudi’s architectural marvels like Casa Batlló and La Pedrera, old school cafes, designer shops, and grand old townhouses, which accentuate the charm of the street. 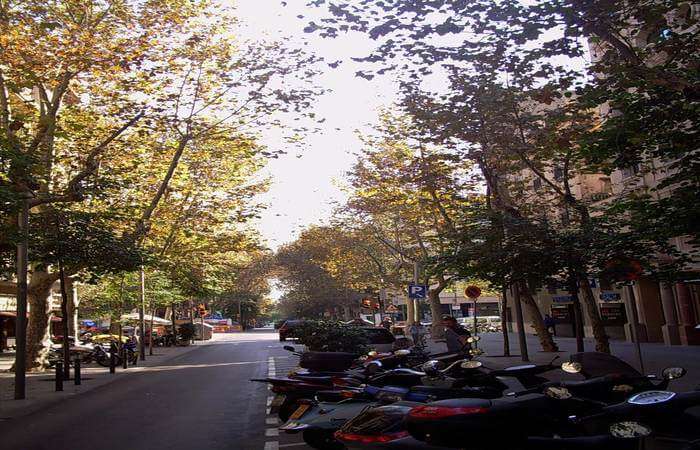 If your heart is craving for a relaxing and leisurely stroll, take a walk down Carrer d’Enric Granados. This is not a touristy place like other streets of Barcelona, and the art galleries, quaint cafes, and shops make the avenue look beautiful and peaceful. Extending from the ancient University of Barcelona to Eixample, people come to relax and unwind at the boulevard of Carrer d’Enric Granados. A narrow street in Barcelona, Carrer Petritxol is located near the Gothic Quarter and reflects vintage Spanish charm. Popular as Petritxol Street, this narrow yet crowded street is known for its cafes and bistros, especially granjas - which are special cafes in Barcelona serving delicious hot chocolate. Other than this, there are jewelry shops, stationery shops and art galleries that enhance the charm of the alley 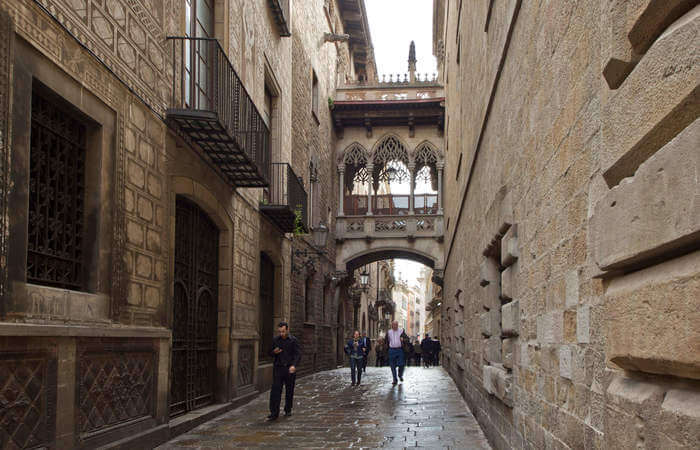 Carrer del Bisbe is one of the most popular medieval streets of Barcelona. During the age of the Roman Empire, this was the main street of Barcelona city. Carrer del Bisbe or the Bishop’s Street is located adjacent to the famous Gothic Cathedral of the city and features houses with Gothic and neo-Gothic designs on both sides. But what makes it extremely popular among tourists is the Gothic Bridge that runs along the street. Also known as Bishop’s Bridge, this extends between Casa dels Canonges or Canon’s House and Palau de la Generalitat or the home of the local council. It is decorated with skull and bones with a dagger through the mouth. 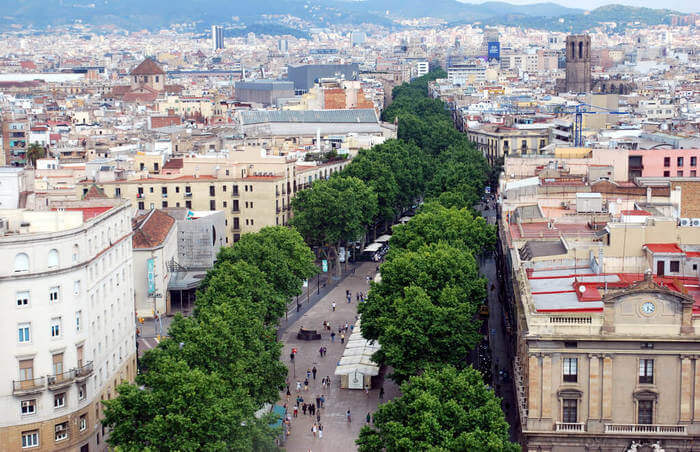 Las Ramblas is the most iconic Barcelona street. Take a leisurely walk down from Plaça Catalunya to the Mirador de Colón near the ancient harbor, and check out the shops, restaurants, flower stalls, souvenir shops, and ice cream parlors on both sides. In fact, the famous celebration of Sant Jordi’s Day in Barcelona is celebrated in Las Ramblas. 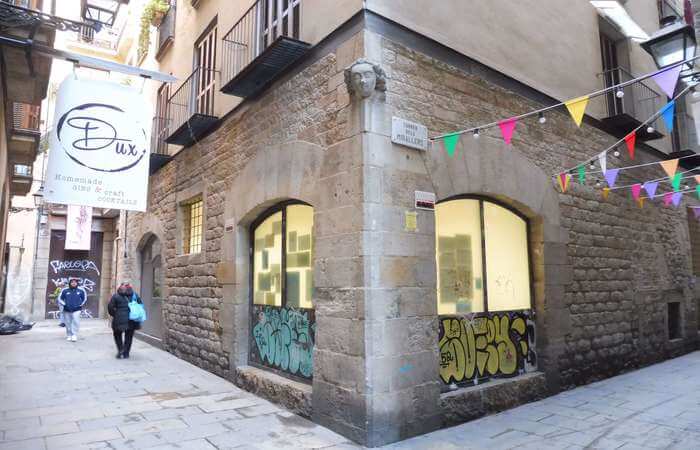 Located near the Gothic chapel of Santa Maria del Mar, Carrer dels Mirallers is a narrow, dark and offbeat street in Barcelona city. Lined with cafes, bars, and some beautiful handicrafts and artisan shops, Carrer dels Mirallers allures travelers who wish to explore the unconventional streets. It is believed to be a haunted street of Barcelona as the famous writer Jacint Verdaguer, who used to live here, practiced exorcism in his residence. One can experience an eerie feeling while walking down the street as, according to popular belief, demonic spirits still roam in the street. 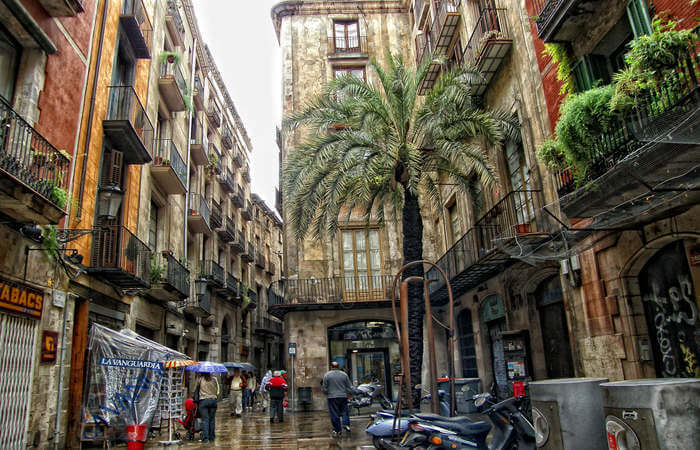 The note on the best streets of Barcelona cannot be complete without Carrer de Montcada. Featuring baroque style palaces and renaissance buildings, this is known to be one of the busiest and poshest streets of Barcelona. Wealthy merchants, businessman, and nobles used to reside here. Out of all the art galleries and museums found in Carrer de Montcada, the most significant one is the Picasso Museum. 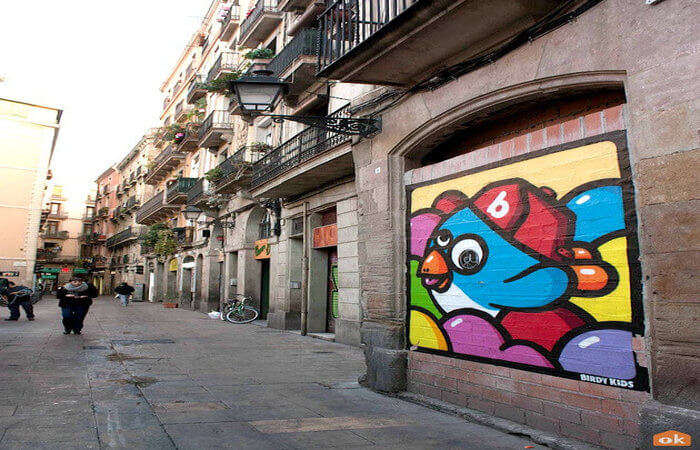 Comprising of mostly trendy bars and restaurants, Carrer dels Escudellers is nothing less than a party street in Spain. Located at the heart of the Old Town, this Barcelona street offers the best nightlife scene. Out of all the fascinating places to eat and drink, Vegetalia and Gopala are worth mentioning 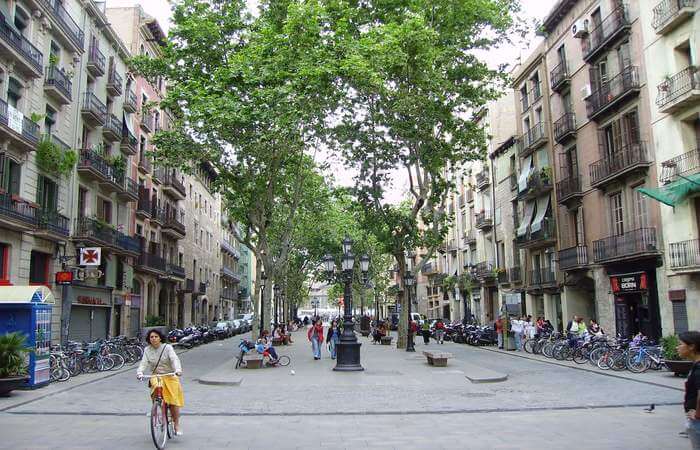 Famed for its happening nightlife scene, Passeig del Born is one of the most beautiful streets of Barcelona, located in the El Born neighborhood of the city. Back in the day, it was the economic and social hub of the city, where most people came for trade, work, sports, and festivals. Presently considered as the quarter of bohemian artists, Passeig del Born has quite a few trendy bars and nightclubs which attract tourists and locals alike.

Along with museums, monuments, churches, and palaces, make sure to check out the aforementioned beautiful streets of Barcelona while you are on a a trip to Spain. Each one of them reflects the traditional Spanish vibes. We promise that you won’t be disappointed.