Just like any other city in the world, Amman has its own charm. It may be a small region, but there are plenty of best places to visit in Amman that’ll encourage you to linger for a while before heading to Petra and Wadi Rum. The capital is relatively young but it’s an interesting medley of ancient ruins and modern society is sure to attract you.

8 Best Places To Visit In Amman

After visiting Amman you may realize that the city isn’t just about touring the past, it has a little of everything for every type of traveler. 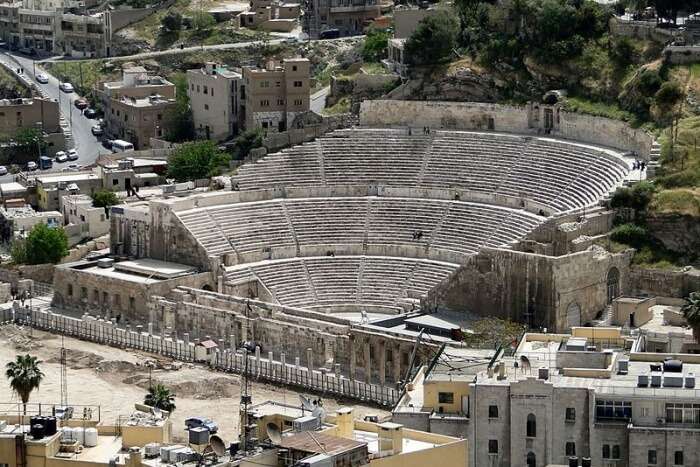 Built during the rule of Antoninus Pius in the 2nd century, Roman Theater is so large that it can accommodate about 6,000 people. It is strategically built on the hillside to keep the sun off the viewers. The theater isn’t just one of the best places to visit in Amman city, it is also the most impressive remainder of Roman Philadelphia. This place will change your experience of visiting a theatre. Put this place definitely on your list.

Must Read: 12 Things To Do In Winter In Jordan To Experience The Country’s Beauty Like Never Before 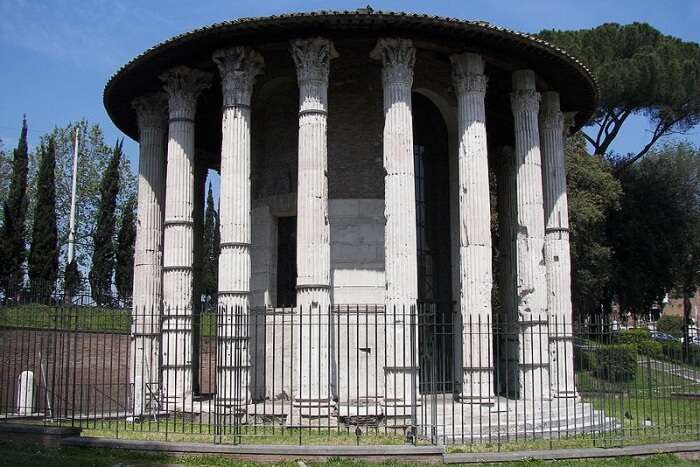 Overlooking Amman’s gleaming skyline is the Temple of Hercules. It is situated at the peak of Citadel Hill which lets you witness a tremendous panoramic view of Amman city and a romantic sunset. The first thing you’ll notice up there is a giant mysterious hand which belonged to a massive statue of Hercules. It’s still unclear how and why the statue of Hercules was destroyed. The temple is among the most significant places to go in Amman for those who would love to explore Amman’s past.

Image Source
Your Amman sightseeing isn’t quite complete without a trip to Duke’s Diwan. Entering the house feels like entering a time machine that takes you back in time. The things around, the feel of the old walls take your through the times you’ve never lived. Built by Abdul Rahman Madi, the house used to be Central Post Office and then it was converted into a hotel for about 5 years. It’s now a heritage where writers and artists come and conduct book signing events, host lectures, and so much more. 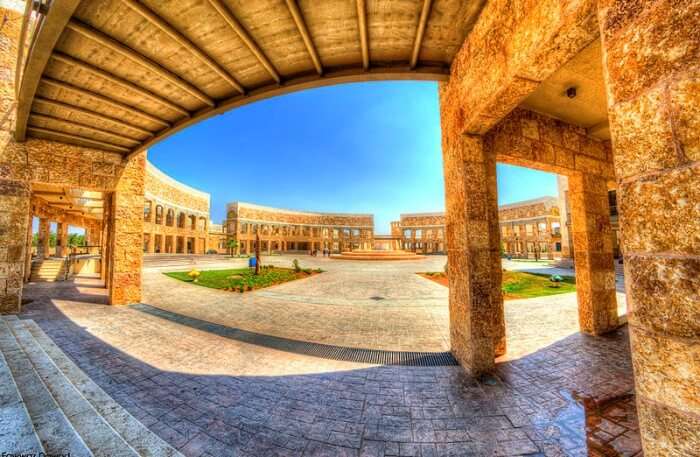 Wild Jordan Centre is not one of the ancient places in Amman. It’s a cafe owned by the Royal Society to save nature. The serene and modern cafe has a beautiful location overlooking Amman’s skyline. You can spend a peaceful evening with your companion here. It is definitely one of the best places to go in Amman with friends. So, if you are on a trip to Amman, then you should definitely check this place out.

Suggested Read: Safari In Jordan: A Must-Do Activity That Should Be A Part Of Your Itinerary 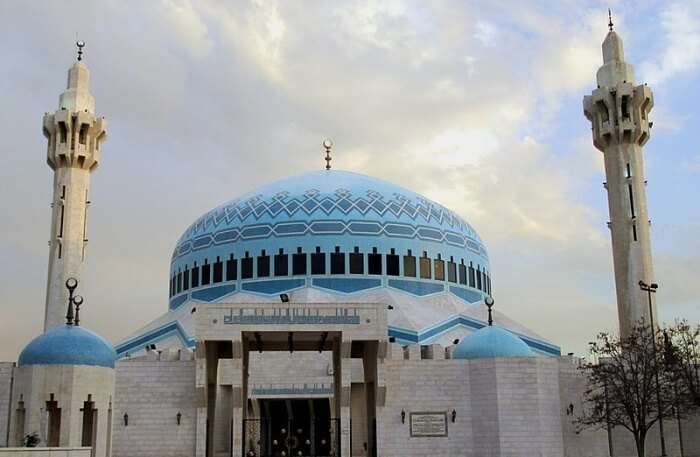 The King Abdullah I Mosque in Amman is the most beautiful places to visiting in Amman. Built between 1982 and 1986, the mosque is a marvellous example of modern Islamic design. It has an incredibly gorgeous blue dome where 3,000 devotees can pray. There’s a museum inside the mosque where a pottery collection and photographs of His Majesty King Abdullah I are kept. 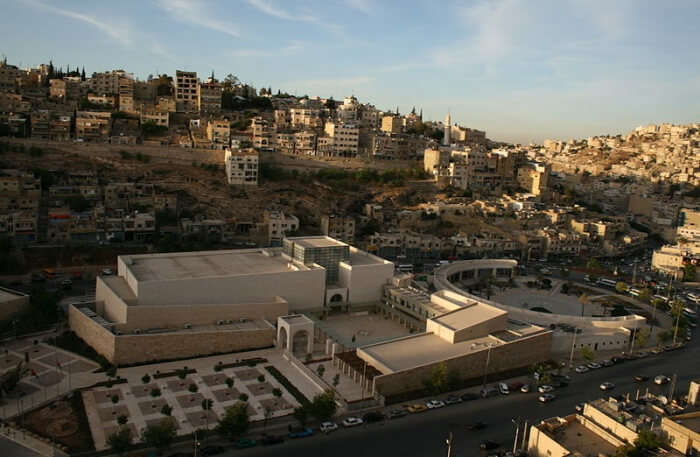 If you want to understand the great history of this little country, then The Jordan Museum is one of the best places to visit in Amman for you. The museum showcases the history and culture of Jordan in beautifully designed galleries. It’s home to the incredibly gorgeous Ain Ghazal statues (oldest human statues in the world). It is not just a museum, but a storyteller. Let the history of this place unfold in front of you as you take a tour. 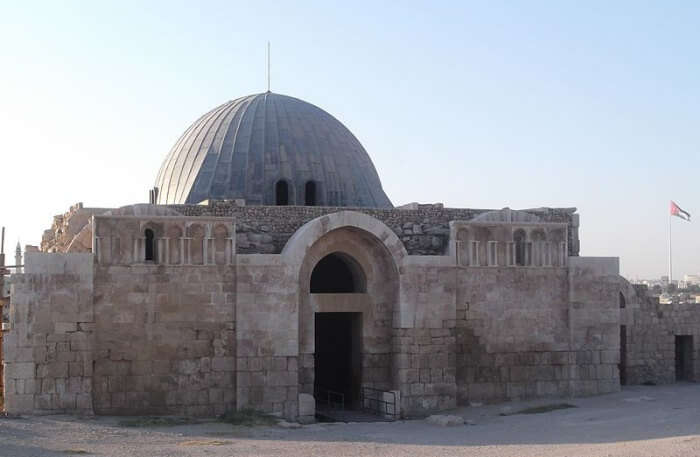 Built in 8th century, Umayyad Palace is a large complex from the Umayyad Period.  The Umayyad was a dynasty that ruled the city for a few centuries. The palace is actually a ruin with a restored domed entrance to attract tourists. It has a captivating Islamic architecture with its wall decorated with Islamic art of the Umayyad period. The Umayyad Palace stretches over the northern part of the Citadel hill offering panoramic view of the city.

Suggested Read: Shopping In Jordan: Buy All That Is Distinct And Quaint In The Country Of Jordan

One of the most fashionable and happening places in Amman is the Rainbow Street. The graffiti-covered walls, colorful umbrellas, vibrant cafes, street food vendors, flea markets, night clubs, and young crowd, that’s how the Rainbow street looks like. This can be the most exciting part of your Amman trip if you’re not too much into historical places. In fact, it is one of the best places to go in Amman at night and have fun when the sun goes down.

Further Read: 60 Tourist Places In Dubai: Do Not Come Back Without Visiting These Marvels

Amman may not be the most beautiful city in the world, but the warmth of the people and the modern way of living life will surely make you love this city. plan a trip to Amman without wasting a moment and make the best memories of your life

Frequently Asked Questions about Best Places to Visit in Amman

Is there anything to do in Amman?

Yes, there are lot of things that you can do on your trip to Amman. It is home to some of the great sightseeing points like the Roman Theatre, Rainbow Street, The Royal Automobile Museum, Temple of Hercules and many more.

Is Amman safe to visit?

Yes, Amman is a safe place to plan a trip. The crime rate here is low and the destination is tourists friendly. The place is safe to walk around at night and explore the downtown area.

Is it safe to visit Amman, given the covid situation?

Yes, it is safe to visit Amman, given that you follow all guidelines and take all the necessary precautions. Make sure to get yourself vaccinated before planning a trip, also wear masks at all times, maintain social distance at public places and sanitize your hands regularly.

How can I spend a day in Amman?

Visiting the Roman temple of Hercules at the Amman Citadel, the Roman Theatre in Amman, Manakeesh with Zaatar and Halloumi and Ummayad palace are some of the places you can visit in a day in Amman. You can also explore the local market and restaurants here.

What is there to do in Amman at night?

Amman is quite known for its happening nightlife, you can either go pubbing or hang out at some rooftop lounge. The Sanctuary, Oz Boutique Restaurant, Library Lounge & Cigar Bar, Ghoroob Rooftop Lounge are some of the famous spots to enjoy the nightlife of Amman

What are some of the top attractions in Jordan?

Petra, Dead Sea, Wadi Rum, Jerash Ruins, Aqaba, the Gulf Of Aqaba, Wadi Musa and Desert Castles are some of the top attractions to visit in Jordan.

Is Jordan cheaper than India?

No, the cost of living in Jordan is quite higher than in India. Even planning a trip to Jordan will cost you more than India as the transportation and accommodation costs here are quite high. However, you can always opt for affordable options to complete your trip within budget.

Is alcohol allowed in Jordan?