Bhutanese Food: 10 Best Dishes That Foodies Must Try In The Land Of Thunder Dragon! 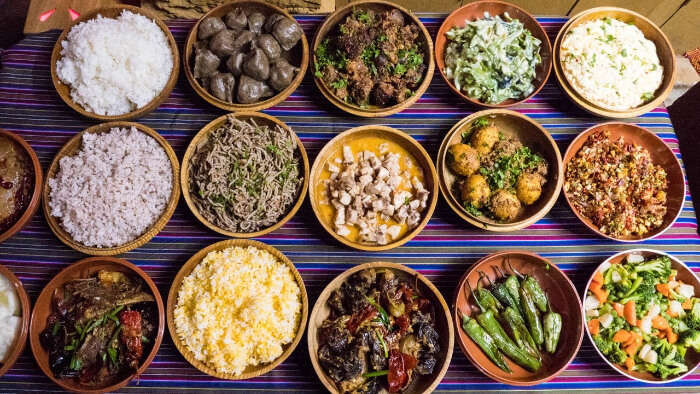 Bhutan is one of the cleanest and scenically beautiful countries in the world. There’s no doubt that this country of strong culture and traditions will leave the visitors spellbound by its enthralling natural wonders and divine culture. However, not many people know about the enticing flavors that this place holds. Whether it’s the main course or side dishes, Bhutanese food will take your taste buds on a rollercoaster of flavors.

10 Bhutanese Food That Are A Must-Try

Considered amongst the most indigenous cooking styles in the world, Bhutanese cuisine is one which you shouldn’t dare to miss while in Bhutan.

Ema Datshi is a traditional Bhutanese stew made using the ever so available Yak Cheese and lots and lots of chilies. Bhutanese people just love chilies and cheese, that’s why almost every dish you’ll find in Bhutan may turn out to be cheesy as well as spicy. Also known as the national dish of Bhutan Ema Datshi is made using Yak cheese, Garlic, oil, split chilies, onion, and tomatoes. This dish is normally eaten with red rice.

Where To Eat: The Place in Chang Lam, Thimphu

Must Read: Chimi Lhakhang: Experience The Peace And Tranquility Of Bhutan’s Most Visited Temple

Shakam Paa is a magical Bhutanese dish made using ground beef, dried chilies, and radish. The beef in this dish is a bit chewy because beef is first dried and preserved before being used in this dish. Shakam Paa is an excellent source of protein and is one of the staple diets of the Bhutanese people. The technique of drying and preserving beef is also a part of the normal cooking style of Bhutan.

Where To Eat: Dorji Troy Restaurant in Zangdopelri Complex, Thimphu

Another one of the famous Bhutanese dishes is the Jasha Maru. Prepared using chicken, garlic, onion, ginger, tomato, and onions, this dish is ready to take your taste buds. Considered to be one of the spiciest dishes in the Bhutanese cuisine, caution is advised before eating this served. It is best served with red rice just like any other authentic Bhutanese delicacy.

Where To Eat: San Maru Restaurant in Norzin Lam, Thimphu

Suggested Read: 10 Fascinating Places To Visit In Phuentsholing On Your Trip To Bhutan

Phaksha Paa can be a gravy or a stew. Made using pork, Phaksha Paa includes a complex blend of spices and chilies and some mountain vegetables which are all cooked in oil or butter whereas pork is first stir-fried and then added to the dish. This is a staple Bhutanese dish which is also served with rice.

Bhutanese never waste things that can be used in one way or another, this dish is a perfect example of that culture of Bhutan. Zow Shungo, another one of the popular dishes of Bhutan is made from leftovers of vegetables and red rice. This dish a favorite among the Bhutanese people can be made without efforts moreover, it also helps in cutting down food wastage.

Where To Eat: Baan Thai in Norzin Lam, Thimphu

Suggested Read: Paragliding In Bhutan: Get All The Information You Need

It is another form of Ema Datshi which also popular among the Bhutanese locale. Made using dried Bhutanese beef, the cooking process for beef is a little bit different whereas rest everything else is similar to Ema Datshi. It is this cooking style of beef that makes it different from Ema Datshi. As in the case of Ema Datshi, Shakam Datshi is also best served with red rice.

Where To Eat: Karma Restaurant in Phendey Lam, Thimphu

One of the most widely eaten Asian food, Dumplings are also an integral part of Bhutanese cuisine. Bhutan serves some of the best dumplings in the entire world, moreover, it is advised to eat dumplings of Bhutan. Many varieties of dumplings are served in Bhutan, depending on the filling the dumplings can include beef, pork, cheese, and even chilies.

Suggested Read: Top 10 Honeymoon Places In Bhutan To Fall In Love All Over Again!

Another one of those staple foods in the Bhutanese Cuisine, Puta is a complete meal in itself. The noodles in Puta are healthy and are prepared using bucket wheat. A good substitute for rice dishes, Puta is made by cooking these wheat noodles using sauces, vegetables, and meat. The noodles used in the dish are generally boiled however they are served stir-fried in oil.

Majority of the traditional Bhutanese dishes are heavy in meat content, however, this one is an exception amongst them. Goen Hogey is, in fact, one of the lightest Bhutanese dishes around. Made using sliced cucumbers, chili flakes, onions, datshi cheese and cilantro, this dish is all but a cucumber salad. This dish can be eaten to feel refreshed and is popularly enjoyed with Sichuan pepper zheng.

Where To Eat: Chig Ja Gye, the restaurant of Taj Hotel in Thimphu, Bhutan

Suggested Read: Bhutan Trip In April 2022: A Vacation With Friends Can Be Way More Fun Like This

In Bhutan, Yak is the main source of milk, wool and dairy products that’s why their beverages are also made from Yak Milk. Tea is consumed all across the world and most popularly in Asia, however, in Bhutan the tea is different from what is consumed in other nations. The tea consumed in Bhutan is made from fermented Yak butter and Yak milk which is also really helpful in confronting the extreme cold, as in the case of Bhutan. This is one of the most popular drinks consumed all over Bhutan.

Further Read: Top 10 Indian Restaurants In Bhutan You Definitely Need To Grab A Meal At

Family Trip To Bhutan: Incredible Things To Do On A 6D Trip

A Perfect Blend Of Adventure & Bliss, Our Romantic Trip To Bhutan Was A Dream Come True