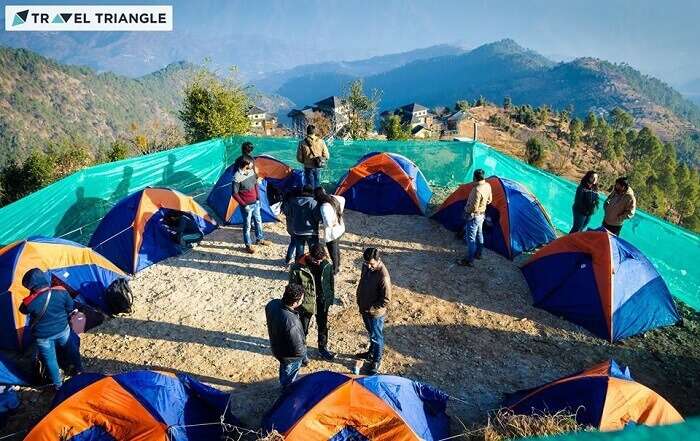 There are a few weekend getaways from Delhi that are still not in the radar of many tourists, and thus are not chaotic. 38 km away from Mussoorie, Kanatal is one of such destinations. It is a quiet and lovely village tucked in the Himalayas, surrounded by nothing but forests. It is perfect for a weekend of camping and adventure in the lovely hills of Uttarakhand.

Camping in Kanatal is an affair full of adventure as well as serenity, depending on what you want to take away. Trekking, rock climbing, and rappelling are among the most adventurous things to do in Kanatal. Stargazing is a steal for the one who longs utter tranquility, and nature’s own drama.

Not known to many tourists, Kanatal is a peaceful Himalayan getaway. The name means ‘one-eyed lake’, and it was named so after a lake that had dried up here. Legends also says, this is the place where Lord Shiva brought the dead body of Sati from Haridwar. There is a temple located at 9,995 feet, dedicated to Goddess Sati. The trek upwards is nothing less than a reward, because the 360 degree view is truly captivating.

Must Read: Weekend Getaway To Kanatal: Things To Do On A Solo Trip

How To Reach Kanatal From Delhi

About 300 km away from Delhi, Kanatal is well connected to different towns and cities of India, through air, rail, and road.

By air: Jolly Grant Airport is the nearest airport from Kanatal, located 90 km away. You can hire a taxi or board a bus to reach Kanatal, it should take you three hours to reach. This airport is connected to Delhi via frequent flights.

By road: This is the most economical and scenic way to reach Kanatal. Since the roads are well-maintained, you won’t find any major problem in the route. If you’re traveling by bus, you have an option to opt for luxury or ordinary buses. Catch a bus heading towards Mussoorie, Dehradun or Haridwar, and on reaching catch another bus or taxi to reach Kanatal.

Total time taken to reach Kanatal from Delhi by road: 8 hours and 30 minutes

By train: Nearest railways stations from Kanatal are located in Dehradun and Rishikesh, at a distance of 78 km and 76 km, respectively. Both these stations are well connected to different cities and towns in Northern India, and other parts. Getting a taxi, or bus is not an issue from either of the railway stations.

Best Time For Camping In Kanatal

Kanatal welcomes the visitors with lovely weather throughout the year. Hence, the best time to visit Kanatal is anytime you want. Most of it is also good time to go camping in Kanatal.

Summer (March – June): The weather stays pleasant with maximum temperature reaching maximum up to 28 degrees celsius. However, nights can be a little chilly so make sure you carry light woolens along too.

Winter (October – February): Winter in Kanatal means magic! The whole vicinity gets blanketed with snow, and it looks like a winterland you’ve been dreaming of. The temperature drops down to as much as 1 degree celsius. If you’re visiting during this season, keep yourself warm with heavy winter clothing.

Monsoon (July – September): With monsoon comes normally to heavy showers of rain. This also is the time when you’ll witness the valley in full bloom. Landslides can be one of the concerns and thus monsoon is not the best time to plan camping in Kanatal.

Camping in Kanatal is about adventure activities, scenic landscape and an evening with bonfire and music. This whole experience is refreshing, and to the cherry on the cake is that you can do it on a weekend only. So, here’s a suggested itinerary for a two-day trip.

The journey between Delhi and Kanatal takes about 8 to 9 hours. It is best to go for a night journey if you’re planning camping in Kanatal. If you leave around 9 pm, you’ll find lesser traffic, and you also won’t be compromising on your sleep.

Suggested Read: 10 Best Restaurants In Kullu That Will Give You The Flavor Of Himachal

Day 1: A Day Dedicated To Adventure And Bonfire

Winding through the hills, watch the sunrise right out of your window. And by the time sun is up and shining you’ll be there in your camping site. You can opt to pitch your tent or go for tented accommodation. Camp Carnival is among the best camp properties here.

Take some time to relax – sip a hot cup of tea while gazing at the cloud-kissed peaks in front of you or go for a short lone stroll. A few hours later, gear up for all the adventure activities coming your way. Rappelling, rock climbing, valley crossing, and Burma bridge are among the things to do in Kanatal.

After the activities, feast on a delicious lunch. Post lunch, you can take a trek to Surkanda Devi Temple, which is 2.5 km up the hill. It takes you through dense forest, but the view makes the path easy and fun. This Hindu temple is dedicated to Goddess Sati, and is among the hypnotizing places to see in Kanatal.

After a day filled with adrenaline rush, the evening calls for a relaxing tea and snacks session. The setting of sun will unfurl tinges of reds and oranges beyond the hills. As soon as the sky gets darker, singing by the bonfire will lighten up your soul.

Suggested Read: 9 Awesome Things To Do In Kanatal For A Refreshing Getaway

Your adventure camping in Kanatal ends today. Say goodbye to your campsite this morning, once you’ve gorged on sumptuous breakfast. Before you head up back to Delhi, halt for about an hour near the Tehri Dam, the tallest dam in India. If you’re still up for a little bit of thrill, there’s watersports awaiting you. Jet skiing, boating, rafting, and kayaking are among the watersports you can indulge in.

Even if you’re a peace-lover, you’ll be able to find a corner all for yourself. Try your best to leave for Delhi before 3 pm so you can reach at night.

Suggested Read: With These 15 Weekend Getaways From Delhi Under 5k, Budget Is No More A Constraint

Things To Pack For Camping In Kanatal

Estimate Expense For Camping In Kanatal

The following are the important tips you must surely keep in mind before heading for camping:

Further Read: 6 Best Sites For Camping In Dhanaulti And Kanatal

So what are you waiting for? You’re all set now for camping in Kanatal! Pack your bags and leave now. After all, it’s a bad manner to keep a vacation pending. You can plan an enthralling weekend trip with TravelTriangle and have the most refreshing vacation this summer!

What is the best time to go camping in Kanatal?

The best thing about Kanatal is that you can visit the destination any time throughout the year. The weather remains pleasant and welcoming all year round in this destination.

How do I reach Kanatal?

The best way to reach Kanatal is by taking a flight to Jolly Grant Airport. This Airport is located around 4 hours from the destination. However, if you live in the northern part of the country, it is best to take the roadways. Kanatal has an amazing road network that connects it well to the cities.

What should I pack for camping in Kanatal?

It all depends on the season you are planning to camp. If you choose summers, carry very light woolens for the light evening breeze. However, if you are visiting during the winter season, carry your warmest pullovers and thickest jackets.

What is the lowest and the highest range of camps in Kanatal?

What is the estimated cost of camping in Kanatal?

What else can we do when camping in Kanatal?

There is plenty to do here apart from camping. Rappelling, rock climbing, valley crossing, and Burma bridge are among the things that you can try out in Kanatal.

Which is the most popular camp in Kanatal?

There are numerous popular camps in Kanatal, each known for their exclusive experiences. Some of the most popular among them are Camp Carnival, Living Kanatal Camp, and the Kanatal Orchids Camp.

41 Awesome Places To Visit In North Goa In 2021 For A Kick-Ass Beach Holiday!