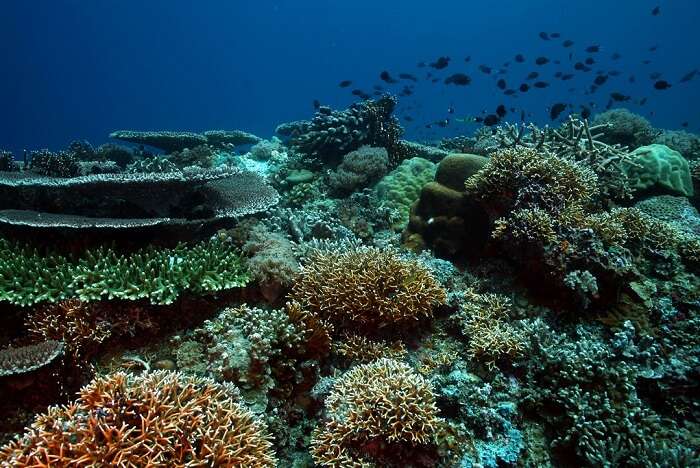 The atolls are a phenomenal creation. They are truly one of the most majestic creations of the Almighty. The question arises: how is an atoll formed? The ring of the corals, that initially grew all around the shore of an island, grow on top of the Island while the island erodes or subsides away, thus forming atolls. We’ve shortlisted 10 most captivating atolls in the world.

10 Captivating Atolls in the World

This article presents you with a list of 10 captivating atolls in the World that should be visited at least once in one’s lifetime. These 10 atolls are proponents of sheer beauty and excellence:

Located around the capital of Tuvalu between Hawaii and Australia, the Funafuti atoll is only about 20 meters wide at the narrowest sides, while the widest sides reaching till four hundred meters. With a population of only 6,200, Tuvalu is second least populated country in the world, after the Vatican City. There are a lot of activities that can be pursued on the island.

Must Read: 6 Best Zoos In Melbourne For A Wildlife Encounter In The Fox Capital Of The World!

Part of the Marshall Islands, the Bikini Atoll is a place where 23 nuclear devices were tested by America between the years 1946 and 1958 at seven different sites. Today, the prime attraction here is the amazing pile of shipwrecks and the relics remaining from those detonations. Tourists can enjoy diving here. They are provided with tours as well.

3. Atolls of the Maldives

There are numerous Atolls in the world that are famous for their scenic beauty as well as for providing the chance to pursue various adventurous sport activities . Maldives comprises of 1200 magnificent pieces. These atolls in the visually stunning country of Maldives are no different as they provide tourists with activities like scuba diving as well as snorkeling.

Suggested Read: 15 Rivers Of The World: Soak In The Mesmerizing Sights Around The World

One out of the four atolls in the western hemisphere, the Lighthouse Reef has earned fame due to the Great Blue Hole that is located at its center. The deeper you dive, the clearer the water gets, showcasing more of its hidden secrets. The stalactites and limestone formations in these deep waters offer one of the most stunning sights. This can be considered as one of the most sought after dive spots in the world.

Being a part of the great Tuamotu Archipelago, this no doubt features in the list of the most stunning atolls in the world. Tikehau is abode to many fish varieties. It is said to be the area with the highest concentration of fish in French Polynesia. The island can only be accessed by boarding a flight from Tahiti to Tuamotus.

One of the most clean and pure tropical islands in the world, the Caroline island is home to one of the largest coconut crab population in the world. As it offers suitable and favorable conditions to the flora and fauna here, it comes as no surprise that this atoll is considered a wildlife sanctuary. Standing only six meters above the sea, it is predicted that it will be completely underwater by 2025 and it is thus advised to visit this place while it is still possible to.

Located on the Cook Islands, this atoll in the South Pacific Ocean is among the most captivating atolls in the world. It offers stunning, breathtaking views. With the jaw-dropping scenic beauty and activities it offers to the tourists here, it is no wonder that the Aitutaki Atoll is the second most visited place of the Cook Islands. The lagoon and its surrounding islands are equally wonderful.

Suggested Read: 10 Famous Bridges In The World That Are The Icons Of Modern Architecture

Aldabra is the second largest atoll in the world. Due to accessibility issues, it remains one of the most pristine and beautiful atolls in the world. It is home to over 152,000 giant tortoises. It comprises of the largest population of coconut crab. Since 1982, special measures have been taken in order to protect the species residing here.

With crystal-clear blue waters surrounding it, it is one of the most visited underwater diving spots. Situated about 355 km away from Tahiti, Rangiroa, apart from being one of the biggest atolls in the whole world, is also popular for offering numerous scuba diving sites. You can crash at any one of the beautiful hotels in this area.

Suggested Read: 8 Best Red Sand Beaches Around The World To Add A Twist To Your Beach Vacay

Tubbataha Reef comprises of 2 of the most amazing and captivating atolls in the world. The two atolls are named as the North Atoll and the South Atoll, and are separated by a deep channel that is about 8 kilometres wide. It is one of the best scuba diving places and a popular tourist destination in Philippines. Home to various species of fishes, this atoll is visited only by divers and fishermen. And while the reef provides fantastic diving spots, it also provides beautiful habitats for many colonies of fish.

Further Read: 10 Bars That Offer An Out Of The World Nha Trang Nightlife Experience

Found only in the tropics and subtropics, atolls are known to be made up of colorful reefs and the turquoise lagoons. Most of the captivating atolls in the world are located in the Indian or Pacific Oceans because the corals live in the warm tropical and subtropical waters. Go ahead and plan your next summer trip to any of these beautiful atolls and have one of the best times of your life.