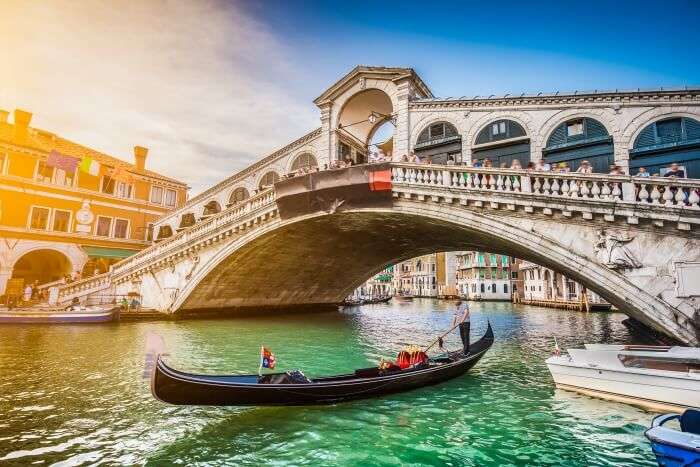 Bridges have been one of the best architectural structures made by man. No wonder, they are the bridging the gaps between places by overcoming a number of obstacles. Besides, there are a number of famous bridges in the world, which have earned great significance, by not only providing easy transportation but also because they have become iconic symbols.

Top 10 Famous Bridges In The World

Tourists from all over the world still wish to get a glimpse of the spellbinding London Bridge at least once in their lifetime. But there is more to bridges than just this one.
Let us walk you through the top 10 famous bridges in the world. Read along to find out.

Chapel Bridge is built over the Reuss River, in Switzerland. Not surprisingly, Switzerland is a place everyone dreams of visiting. So, if you are one of those eminent dreamers, add this bridge to your check-list and pay a visit to one of the most iconic and famous bridges in the world.

The most interesting part of this bridge is that it is completely wooden and the oldest one. There is a shed all over the bridge, so you experience a shady pathway as you travel across the river. You would not believe the beauty unless you visit the place.

It was constructed in the early 1300s, intended to protect the people from foreign attacks living in the city, Lucerne. Another distinguishing feature of this bridge is the trail of paintings on the inside of the bridge. All the paintings depict various events from the 17th century. All these features make this bridge one of the most famous bridges in the world.

Must Read: Indian Restaurants In Zurich: The Spicy, Tangy, And Sweet India Of Switzerland

The Brooklyn Bridge is another of the famous bridges in the US. This bridge connects the two renowned places, Brooklyn with Manhattan, over the East River. Having been built in 1883, this bridge has become an iconic and marvelous attraction in New York.

The most distinguishing feature of this bridge is the walkway along the length of the bridge. Besides, there is a path for cyclists too. Although these are open the whole year round for the pedestrians as well as the cyclists, these paths in the bridge are of great help during the times of difficulty.

The Brooklyn Bridge is thus one of the 15 most famous bridges in the world. Especially, after the 9/11 attack, this walkway of the bridge served as a savior to many as the other normal means to travel were blocked.

One of the most iconic places you can ever visit, the Tower Bridge in London is amongst the most famous suspension bridges in the world. Built over the River Thames, you can get a spectacular view of the surrounding of the bridge. It is a combination of bascule and a suspension bridge.

The bridge has become a famous tourist destination as well as a shooting location for many commercial movies lately. The bridge has two towers, which are connected in the upper end with the help of two walkways. These walkways help in maintaining the balance as well as support the suspended sections. It is therefore listed under top 10 famous bridges in the world.

This bridge in Australia is listed amongst the 30 most famous bridges in the world. As you reach there, you will find the wallpaper in real. No wonder, it is a highly photographed place. The highest point of the bridge is at a height of 134 meters, which is approximately 440 ft.

The bridge took almost eight years to complete, and the effort is evident from the magnificent steelworks and the overall construction. Sydney Harbour Bridge is one of the famous arch bridges in the world. Due to the fact that steel expands and contracts with respect to the rise and fall in temperature, the height of the bridge thus rises or falls to 18 cm.

The Charles Bridge is in Prague, capital of Czech Republic. The construction had started in the mid-1300s over the river Vltava, under the direction of King Charles IV, and hence the name of the bridge. It is one of the 5 famous bridges in the world as it a connection bridge.

It was built to connect the ancient town with the areas near the castle in Prague. As a result, this bridge served as an important trade connection too. you are likely to experience the best scenery here with all well-built building nearby with the river flowing in between.

It is the most visited by tourists, and therefore, it is regarded as one of the famous bridges in the world.

Suggested Read: Christmas In Prague: A Beautiful, Enchanting, And Festive Sight To Behold

It is an iconic bridge in Bosnia and Herzegovina, in the city of Mostar. The extravagant bridge is surrounded by spectacular greenery. You need to see it in order to believe it. The hills in the distance add to the overall beautification of the place.

The civilians live nearby and therefore a trip to the Stari Most or Old Bridge is sure to give you a wide variety of experiences. It is built over the River Neretva and young men often leap over the river from the bridge as a means for swimming or having fun. It offers an exciting atmosphere and therefore is counted in the list of the top 10 famous bridges in the world.

Owing to the scenic beauty Italy possesses, the bridges just add an extra mile to the charm of the place. Rialto Bridge is an outstanding architectural structure in the Grand Canal. Out of the four other bridges, this is the oldest bridge.

The bridge was designed by an architect named Antonio da Ponte and completed in the late 1500s. The Rialto Bridge was initially built as a replacement for the wooden bridge nearby, which had collapsed back in the early 1500s. However, later many critics had predicted its fall too, but it is standing even now. It has defied all those critics, which is why you can find its name in the list of four famous bridges in the world.

Suggested Read: 8 Cozy Homestays In Italy For Truly Home Away From Home Experience

If you are planning to visit this place, it is advisable to visit the bridge after the Sun sets. The spectacular reflection of the 33 arches on the river Zayanderud is worth watching. This bridge is made of simple bricks and stones and was initially opened in the early 1600s to the public. Its simple yet captivating structure has ranked it among the top 10 famous bridges in the world.

The name itself speaks for the bridge. It is an old bridge in Florence. The view is spectacular, as you go by this bridge, built over the Arno River in the medieval period. The bridge stands intact till today with shops build along the bridge.

Listed as one of the 30 most famous bridges in the world, this is an iconic place to visit. With a wide variety of shops available along the path of the bridge, you are likely to experience a completely new type of market, never seen before. The tenants of today are mostly jewelers, art sellers, and the souvenir sellers.

Suggested Read: 10 Day Trips From Florence To Satiate Your 2021 Wanderlust!

Last, but not least, this is a famous bridge in Southern France. The bridge is spread over the greenery, and you will get picturesque views when you ride over it. The speed limit is reduced to 80 mph for this purpose especially.

A series of cables support the bridge and therefore, makes for one of the most famous bridges in the world. It is the tallest bridge in the world, specifically meant for vehicular transportation. The height measure around 340 meters, which is equivalent to almost 1120 ft. You would be surprised to know that measurement is actually higher than the Eiffel Tower itself.

Further Read: Scuba Diving In France: Get Your Gear Out For A Transcendent Underwater Experience

With this, this segment on the most famous bridges in the world comes to an end. While they can’t all be seen on a single international trip – unless you are on a world tour- you will have to keep them in mind while visiting any of countries that they are in. Bon voyage!

Frequently Asked Questions About Famous Bridges In The World

Q. Which are the world’s most shocking bridges to see?

A. Some of the world’s most shocking bridges to see are Danyang Kunshan Grand bridge, Vasco Da Gama bridge, Beipanjiang bridge and more.