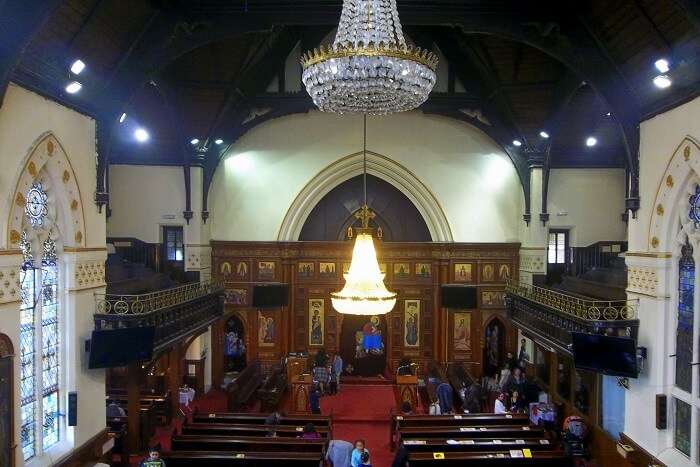 Regardless of what Egypt has been going through in the current years, there is certainly no refuting that Cairo has one of the most distinct, rich and notable histories across the world. Christianity has played a big role in forming Egypt’s past so, churches in Egypt can be seen in each corner of the nation. It doesn’t matter whether you are a Christian or not, every person visiting Egypt would like to know more about its famous Coptic history. There’s no better approach to do so than by visiting the wonderful Egyptian Coptic churches.

Top 8 Churches In Egypt You Must Visit

The Hanging Church is believed to go back to the Patriarchate of Isaac of Alexandria, a Coptic Pope who held the office in the 7th century. The church is constructed on the southern gatehouse of the Roman-developed Babylon Fortress and gets its name from the way that its core is suspended over a gate. Officially, it is known as the Church of the Virgin Mary. The Hanging Church is situated at the core of Old Cairo. The Hanging Church is recognized as the place of many specters of Mary. Hence, this church’s interesting past makes it one of the oldest churches in Egypt.

It is a Greek Orthodox Church which was established on the northern tower of the Babylon Fortress and is recognized by its great arch and exquisite interior. The church is the seat of the Greek Patriarchate of Alexandria and is connected to the Monastery of St. George. This unusual Church of St. George is the single circular church seen in Egypt. A few of its other best highlights are the lovely the wedding corridor that still has marks of the stucco decorations and paintings of the original church before it was reestablished. The church also possesses magnificent stained glass windows.

The Church of St. Barbara is one of the greatest and the oldest churches found in Egypt which dates back to the 5th century. It is located in the eastern section of the Babylon fort. The church was restored roughly in the 11th century. It is titled after St. Barbara, who was born in Nicomedia at the starting of the 3rd century. The Church resembles a shape of a Roman Basilica, includes an entrance, a nave, a narthex, two aisles as well as three sanctuaries that are placed in the east part of the church. The right one is dedicated to St. George; the middle sanctuary of the church is dedicated to St. John and Cyrus while the third sanctuary is handled today for rituals. The most cherished point discovered within this church is its sycamore gate dating back to the 5th century.

Suggested Read: 7 Best Honeymoon Places In Egypt To Visit In 2021 For A Romantic Stint By The Pyramids

This is a charming Cairo church located in Maadi area on the east bank of the Nile river. It is assumed that the Holy Family had gone by precisely the same area of the church, and from that point began their voyage to upper Egypt. From the outer side of the church, there are three old domes, established at the east over the three altars. Then you will discover a door which drives by a passage to the Church itself. Next head to the nave which carries several ancient icons, the shrine screen and a biblical well of water. It’s considered that the church has been adopted by the Holy family who was available to pilgrims from the courtyard of the church. Therefore, its chronicled importance and its ideal area make this church a must to visit place when you are planning a trip to Cairo.

5. The Church of St. Sergius And Bacchus

The church of St. Sergio, also identified as Abu Serga or St. Sergius, was likewise built in the heart of the antique Roman fortress of Babylon. This church is anticipated to be dating back to the 5th century, however, certain archaeologists consider that it was actually made in the 8th century. One of the highly famous spots in the church is the cave where the Holy Family accommodated while their flight from King Herod to the land of Egypt. The structure of the church is of a basilica with a nave, narthex, and two aisles. They are divided from the nave by 12 columns with Corinthian capitals, one of marble, ten of stone, and one of rosette granite. There are also 3 sanctuaries available on its east side; every one of which holds an altar, supported by 4 marble columns with a wooden dome. The top of each altar has religious views of Christ, Angels, and the four missionaries.

St. Mercurius Church is also called Abu Seifein. It was built in the 6th century. The church went through an intense reconstruction in the 12th century. It is in the centre of Coptic Cairo, providing a much quieter atmosphere than any other church in Egypt. The Church of St. Mercurius includes two churches with one on top of the other and several small side chapels donated to different saints. The platform there is one of the most attractive in Cairo, embellished with mosaic and held by 15 marble columns. A doorway in the north aisle of the central church heads into a courtyard with three sanctuaries and a baptistery.

The Church of Saint Simon, also recognized as the Cave Church, is situated in the southeastern Cairo in Mokattam mountain. This area is known as ‘garbage city’ due to of the huge population of garbage collectors or Zabbaleen (that literally means garbage collectors) that reside here. Most of the Zabbaleen are Coptic Christians. Numerous churches have been created into the caves located in Mokattam, out of which the Monastery of St. Simon the Tanner is the biggest with a seating range of 20,000. Even the Cave Church of St. Simon is the largest church in the whole Middle East, so, surely not to miss visiting. Simon the Tanner was an artist saint to whom the cave church was dedicated to. He is linked with the marvel of influencing the Mokattam mountain utilizing a pre-existing cave and the incline that directed inside it. it was made to hold two storeys. Different close by caves have also been developed into separate church locations and all of them have been connected to form a huge Christian complex in the core of garbage city. The walls of the church are decorated with several incredible pictures carved on the rocks describing situations from the Bible.

The Coptic Orthodox Church is founded by Saint Mark the Apostle. This church is a conventional Church that has fully preserved the Orthodox Christian belief. Heliopolis is home to a large section of the Christian community in Cairo. Hence, a visit to the area’s first church to be built is a must to understand more about the contemporary history of Christianity in Cairo. This church is a real flag of contemporary Christian design in the city. The foundation of this church was established in 1922, under the popedom of Pope Cyril V which is presently known to be Cleopatra Street. This place is a historical yet modern and cozy place, so, if you are in Heliopolis this is one of the must-visit churches in Egypt.

Learn about oldest churches in Egypt on your trip to this country. The Coptic heritage is a treasure trove of antiquated artifacts that represent the story of the Christian population, one of the world’s oldest religions. These famous Egypt churches will let you walk the same trails as Moses. Make sure you visit Egypt soon to explore these churches.

Which are some of the most famous churches in Egypt?

Which are some of the orthodox churches in Egypt?

Several Catholic churches in Egypt are quite popular all around the world. Some of them are St. George Church, Coptic Orthodox Church, and many more.

Which are some of the most beautiful churches in Egypt?

Most of the churches in Egypt are extremely beautiful, and some of the more famous ones are Church of Saint Simon, St. Mercurius Church, St. George church, and many more.

Which are the most famous historical churches in Egypt?

What is the significance of the famous hanging church in Egypt?

The Hanging Church of Egypt is believed to be constructed during the time of Isaac of Alexandria. It is inside the famous Babylon fortress.

When is the best time to visit Egypt?

Egypt has fantastic weather all year round. But the right time to go there is between October to April. You will be able to explore the place quite comfortably.

How many days are enough to explore Egypt?

You can explore the entirety of Egypt within eight days. If you do not have much time, you can even cover the place within five days. It entirely depends upon how many places you are going to cover.