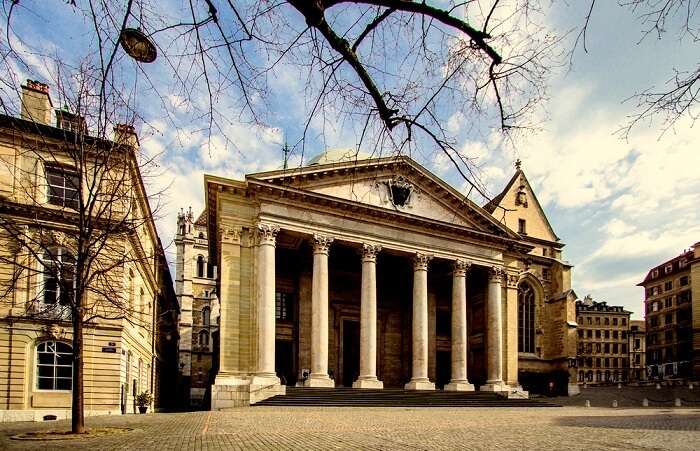 Spending a few minutes inside a church, rejuvenates the mind and soul and helps you reconnect with your inner-self. Though Switzerland is considered to be a federal state with no state religion, around two-thirds of the population are either Protestants or Roman Catholics. The country is home to some of the most ancient and beautiful churches in the whole world. Be sure to visit these magnificent churches and admire the brilliant architecture and rich history on your next trip to the Swiss Alps.

Here is the specially created list of 6 best churches to visit in Switzerland to get closer to the culture and traditions of the beautiful country. Take a look!

No matter where you are standing in Zurich’s old town, you simply cannot miss the large clock face staring back at you. This clock has a diameter of close to 9 meters and is the greatest pride of St. Peter’s church. This beautiful catholic church in Zurich, Switzerland, stands on the southern bank of the mighty River Limmat and is one of the 4 main churches in the city. Be sure to walk into the church, as the interiors are spectacularly beautiful painted with murals inspired by the Baroque style. The location of this century old church has a long history to its name. A Roman temple dedicated to the God Jupiter stood at this location and fell into disuse. Later in the 8th century, a Christian church was erected in its place. Years later in 1706, the church was reconstructed and consecrated to be the first ever Protestant church that stands to this day. This beautiful catholic church in Switzerland is still in use and hosts a number of events all year round.

Suggested Read: Behold These 10 Magnificent Switzerland Waterfalls That Will Blow Your Mind For Sure!

Suggested Read: 8 Magnificent Hill Stations In Switzerland You Ought To Explore Before You Die

The Fraumünster Church, is one of the most prominent churches in Zurich Switzerland. This temple of prayer has been a place of silence and reflection for over 10 centuries. It is one of the oldest churches in Switzerland and is thought to be built way back in 853, in exactly the same spot where an abbey for women belonging to aristocratic families once used to be. The interiors of the church are mesmerizing with stained glass windows designed by none other than Marc Chagall. The church also boasts of elements from not just Romanesque but also Gothic architecture styles. Be sure to check out the biggest organ in Zurich housed in the church. The church also is home to a museum in the crypt where you can get some tidbits about the Reformation era in Zurich.

The St. Pierre Cathedral also known as St. Peter Cathedral in Geneva was originally built as a Roman Catholic cathedral, but later turned into a Reformed protestant church during the time of reformation. This church is also said to the adopted home church of one of the famous leaders of the Protestant Reformation – John Calvin. This swiss reformed church houses an old wooden church used by Calvin. There is no admission fee to visit this shrine, which is considered to be one of the most beautiful churches in Geneva Switzerland. During your visit you will get to climb 157 steps of the towers that lead to the very top of the Cathedral from where you can enjoy magnificent views of the entire city. The stained-glass windows too deserve a special mention. You will get to see stained-glass windows that date way back to the 19th century and are identical to those found in Musée d’Art et d’Histoire

Suggested Read: 10 Unique Museums In Switzerland That Walk You Through History Of Humanity

St. German Church tops the list of churches in Switzerland and for good reason. This church is one of the oldest in Geneva and has stood high through turbulences and troubled times that shook the very foundation of Switzerland religion. This charming little Gothic church was built on a site where fragments of an altar that dated back to the 5th century were discovered. The church was renovated after a fire tore down the Old Town in the year 1334. Most parts of the church barring the steeple were rebuilt in the late 15th century. St. German church has withstood the diversity of the yesteryears and reflects the multi-faceted diversity of the country. A number of music concerts are held here free of charge during summer at the church.

You will be surprised to know how many churches in Switzerland! If art and history fascinate you and you wish to tour the many historic churches in Switzerland, start your tour with Water Church located in Zurich. If legend has it right, this is the site where Zurich’s patron saints Regula and Felix were executed by the Roman folk. This gothic church was originally built on a small island and completed towards the wag end of the 15th century and was considered to be a very holy shrine. A municipal library and warehouse were erected to ensure that nobody was tempted into reintroducing the cult of saints. The church was renovated years later in the year 1942 and is now used for cultural as well as religious purposes. The most attractive feature of this church is the choir windows designed by Augusto Giacometti. The windows depict the life of Christ as compared to the life of today’s modern man.

Further Read: Treat Your Taste Buds With Luxury At The Best Restaurants In Switzerland