15 Thrilling Festivals In Australia In 2021 That Will Give You Major FOMO! 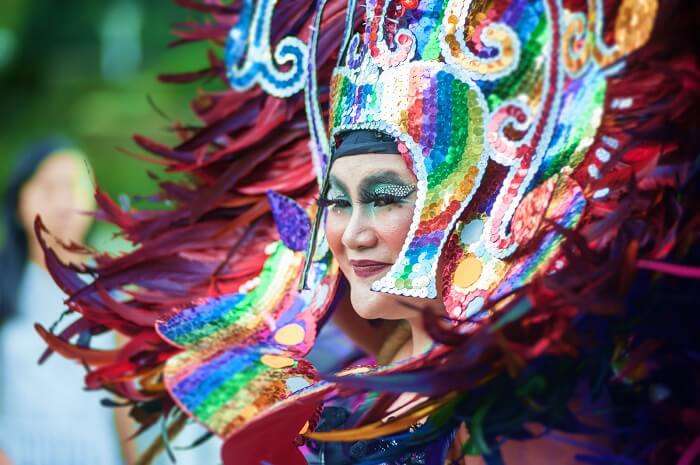 Be it Sydney Mardi Gras or New Year’s Eve, Australia is one of the most fun countries on the planet that comes alive during. The country, famous for its diverse and rich wildlife with incomparable landscapes, has a strong cultural and folk scene. Australians love to party, so you’ll find loads of places to hang out and events to chill at on your trip here. And what better way to immerse in this exciting culture of Australia than attending some of the most famous festivals in Australia! See where and when you can be a part of these once-in-a-lifetime experiences in Australia.

Read on to know the dates and other important things about the most famous Australian festivals. Add at least one of these fests to your itinerary for  fulfilling experience.

First held in 2017, one of the arts festivals in Australia, this gem has emerged as one of the biggest celebrations in Australia of art, capturing the imagination of audiences world over. It has a plethora of events, but most are centered around visual arts, dance forms, opera, cabaret, literature, classical and contemporary music, as well as new media. The festival has grown so huge that it has subsumed other cultural fests of the city – WOMADelaide and Adelaide’s Writers Week also now happen during this festival.

Must Read: The Horizontal Falls In Australia Is Nature’s One Crazy Conjurer Which Is A Must Visit In 2021!

One of the country’s foremost platforms for budding as well as established stand up comics, this festival features performances that range from hilarious to beautiful stage art. The open mic competition has served as an introduction of the wider Aussie audience to the up-and-coming comics of the country.

Held at Town Hall, the best way to enjoy the festival is to show up and pick a random show marked on the dusty big blackboard outside. You might want to book for the big shows in advance though.

Suggested Read: Queensland In June 2021: A Pocket Guide For Planning A Perfect Vacation!

Festivals in Australia don’t get better than this. With celebrations as huge as those in London or New York, the country is engulfed in fireworks, light shows, and parties along the beaches. We would highly recommend flying out there to welcome the new year and attending one of the most beautiful family-friendly festivals in Australia 2021.

Suggested Read: 15 Scintillating Islands In Australia That You Must Check Out On Your Tour Down Under

With headliners like Lionel Richie and Robert Plant, Byron Bay Bluesfest is one of the chicest music festivals in Australia 2021. Attended by over five thousand people every year, this is going to be one of the most famous blues festivals in Australia 2021. It is a dream come true for music lovers, with large food courts, licensed bars, fast-food corners, and beer counters adding to the overall charm. This is what dreams are made of!

Suggested Read: 14 Things To Buy In Australia: Best Souvenirs To Get In 2021!

An international festival that seeks out all forms of art that are out there – dance, music, visual arts, theatre as well as the lost art of the circus – this is the epitome of Australian festivals and celebrations. Held in the metropolis of Melbourne, the festival is attended by over 400,000 people.

The festival has been noted for epic art performances. It is one of those rare, but popular festivals that still have performance art events or art installations. This Melbourne festival is one of Australia’s most high profile festivals and offers an insight into the evolving cultural dialogue that takes place between the artists and their audience all around the world.

Suggested Read: 15 Best Hotels In Australia For Those Who Want Nothing But The Best!

One of the most eclectic and beautiful Australian festivals, Parrtjima began just last year. Set against the backdrop of the Northern Territory’s MacDonnell Ranges that are reputed to be around 300 million years old, the festival centers around the Aboriginal artists of the country. The objective is to raise awareness about the ancient and yet unexplored art forms of the Aborigines that inhabited these lands. Last year, Parrtjima saw almost 16,000 people traveling to see the festival, and is certainly one of its kind celebration of arts and culture.

One of the biggest folk festivals in the world, Woodford Folk Festival Australia is the place to be if you are into arts and music. The festival, centered around folk music, shelters artists from around the world with performances foraying into the world of dance, music, comedy, film, street theatre, and so on. You can even attend workshops here and learn with like-minded people the nuances of creating something from scratch. Oh, and there are fireworks – lots of them – welcoming the new year. If you take our word, this is one of the must-attend cultural and music  festivals in Australia 2021.

Australia is big on horse racing, and nowhere is it more apparent than at the Melbourne Cup. Traditionally held on the first Tuesday of every November, the event brings the entire nation to a halt. There are a plethora of events that happen alongside the race, including the Derby Day and Oaks Day. Held at the Flemington Racecourse, the race is a 3200 meters sprint and is administered by the Victoria Racing Club. First held in 1861, this annual racing extravaganza is huge – the prize money was $6.2 million in 2018!

One of the best festivals in Australia, this three-week long celebration of LGBT rights is famous for the parade held at the end of the festival. Organized in Sydney for the past forty years now, the world’s largest gay festival, Mardi Gras, is attended by over 200,000 people every year. You will find people from all over the world in Sydney uniting in this mad and exhilarating celebration of pride, self-expression, and love. The colorful, exuberating Mardi Gras parade captures everyone’s imagination, with tourists and spectators joining in the celebrations. You could say that it is one of the national festivals of Australia.

Suggested Read: The Horizontal Falls In Australia Is Nature’s One Crazy Conjurer Which Is A Must Visit In 2021!

Australia interestingly lies in the southern hemisphere of our planet, which means the continent enjoys winters when the rest of us are facing the heat. So, next time you want to enjoy June, fly down to Australian festivals and holidays in winters.

This biggest winter festival of the Southern Hemisphere sees Sydney come alive with light projections, music, and fireworks. You can also visit the Queenstown Winter Festival which has lots of barbecued food, lively music, fireworks, and sledges. There is also a black-tie ball to attend here.

One of the largest community festivals in Australia, Moomba is a tradition that takes place every year. Celebrated over four days during the Labour Day weekend, Moomba is your go-toplace if you are looking for excitement and fun on your vacation in Australia during that time. The joy rides, carnival set-ups, fireworks, and food will entice you to attend the event anyway.

Suggested Read: 8 Best Yoga Retreats In Australia That Will Help You Find Your Zen Amidst The Chaos Of Everyday Life!

Of all the festivals celebrated in Australia, Darwin Festival is the most happening and a lit affair. It is not just a fest but also a celebration of Northern Territory lifestyle. The festival goes on for 18 days where you find good food, music, theatre, cabaret, dance, and more. Nothing could be more exciting than attending this festival on your vacation in Australia.

Ultra Austrlia is an experience that you are not going to forget if you are a music lover. Watch out for one of the most happening Australian festivals 2021 where you will get to listen to the world’s best people from the music industry. The fest will take place in Sydney and Melbourne where international musicians like Afrojack and DJ Snake will come to perform. It is one of the best music festivals in Australia that you should be looking forward to in 2021.

Suggested Read: Skydiving In Australia: 7 Best Picks For Taking That Leap Of Faith!

Love theatre? Then, you should make your bookings for Castlemaine State Festival. The 10-day arts and theatre festival will entertain you with opera, music, theatre, dance, and visual arts program. What more do you want? The performances will impress you with all the glitz and bravado, something it has been doing since 1976. If you are an art critic, make sure you be there. It definitely is one of the famous festivals in Australia .

15. Splendour In The Grass

Splendour in the grass is hands down one of the best music festivals in Australia. All the music lovers out there should attend this festival at least once because it is an experience that they will never forget. The fest is organized in a stunning location with a top-notch line of artists. The inception of this Austraalian music festival came in 2001 and has been entertaining people ever since. Ask any aussie and you will always hear good things about this fest.

Further Read: Meditating In This Crystal Castle In Australia Will Keep All Your Woes At Bay

Want to join the fun? Book your trip to Australia well in advance with TravelTriangle and attend any or all of these magnificent festivals in Australia. Believe us, holidaying Down Under does not get better than this!

When are the film festivals organised in Australia?

Which are the food festivals in Australia?

What is the biggest music festival in Australia?

The biggest music festival in Australia happens to the famous Woodford Folk Festival. This festival has been tagged as the largest and the most iconic event of all time in Australia.

Which are some famous music festivals in Australia?

What festivals does Australia celebrate?

What are some spring festivals in Australia?

There are many festivals that place in Australia as the spring season commences. Some of the popular festivals taking place in the spring are Adelaide Festival, Melbourne International Comedy Festival, Sydney Mardi Gras, and Byron Bay Bluesfest.

Are there any winter festivals in Australia?

Yes, there are numerous festivals that take place in Australia during the winter season. The best winter festival in Australia is Woodfork Folk Festival and Vivid Sydney Winter Festival.

How do Aussies celebrate New Year’s?

New Year’s Eve in Australia is something that everyone should experience at least once in their lifetime. Fireworks, light shows, beach parties, and beers in pubs is what defines the perfect Australian New Year’s.

Your Complete Guide To Hamilton Island – Know Everything About This Australian Paradise!

15 Best Hotels In Australia For Those Who Want Nothing But The Best!

School Admission Drive 2018: Putting The Future Of The World In Classrooms Now