Grand Bassin: All You Need To Know About The Holy Temple In The Heart of Mauritius 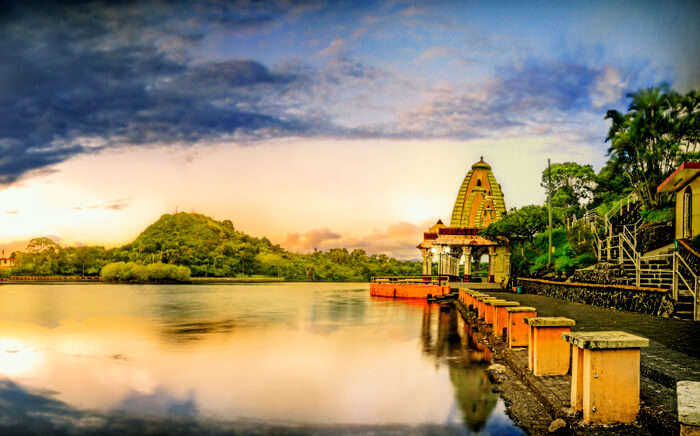 Considered by many as the most sacred Hindu place in Mauritius, Grand Bassin or the Ganga Talao is a large lake formed out of a crater, situated near the western boundaries of the island, atop the mountains. The lake is quite deep, about 50-55 ft. and situated amidst picturesque views all around that adds to the tranquility of the lake.

It is surrounded by several colorful temples and idols of gods and goddesses; and witnesses a humongous fair every year during the festivals. Even the local people join in on this pilgrimage and visit the lake once every year to offer their prayers to the Lord.

If you have been planning to pay a visit to this auspicious lake, read on to know more.

The Ganga Talao is so named due to its connection to the mighty river Ganges in India. History of Grand Bassin has it that a priest named Pandit Jhummon Giri Gossagne was the man who had had a dream about a holy lake, that was connected to the Ganges. This priest then set out on a seemingly impossible journey of finding one such lake. He came across a lake amidst volcanic rocks, above 1800 ft sea level, situated in a picturesque location; and felt that this was very lake he had dreamt of!

After Pandit Jhummon Giri founded the lake, pilgrims of all ages have been visiting it every year; traveling long distances just to visit the Lord. It is said that later a priest carried sacred Ganga water to the island and amidst much ceremony added it to the lake. Thus, the name ‘Ganga Talao’ or pool of the Ganges.

Must Read: 10 Best Temples In Mauritius That’ll Help You Uncover The Marvelous Secrets Of The Country

Ganga Talao Lake in Mauritius is a very popular pilgrim place that has gained popularity, because it is the largest of its kind, outside India. This large crater lake set amidst the secluded mountainous area is beautifully adorned by temples and statues of deities. The entire land is considered sacred and pious in the minds of the locals.

There are stories about how Lord Shiva once landed on the island with his wife Parvati, enchanted by the beauty of the island and the great lake they decided to have a stroll through it. Legend has it that Shiva dropped a few drops of Ganga water accidentally into the pool and it became sacred.

Since then the island has become a hotspot for celebration and mirth on the day of Maha Shivaratri, which is a major Hindu celebration dedicated to Lord Shiva. Thousands of devotees face the hardships of traversing the rugged island, and make their way to the sacred lake, with handmade “kanwars” or shrines which are put down on the banks and offered prayers.

There are many colorful idols all around the lake, with legendary stories spun around them. Besides these temples, there are giant statues of Lord Shiva and Goddess Durga built in the open, and for all to see. These huge statues are a real marvel! The Grand Bassin Shiva statue is a whopping 108 ft in height, and is the third highest Shiva in the world. It is known as the ‘Mangal Mahadev’ or the gentle and caring Mahadev.

A Durga statue that shares the same land, and stands at a staggering 108 ft. has recently been inaugurated and attracts a large number of Hindus besides tourists belonging to other religions.
Devotees ardently making the journey to get a glimpse of the Lord, or a touch of the sacred pool is believed to be cured of all illnesses!

The significance of the Grand Bassin sacred lake and temple will not be clear unless we take a quick sneak peek into the history of the Indian laborers residing in Mauritius. This island was earlier inhabited by over half a million indentured laborers and slaves of the British Dynasty, who were brought to this place with promises of a better life.

But far from better, the island of Mauritius earlier had extremely rough and uninhabitable conditions prevalent, which made it harder to survive for the ones who were still alive. Several workers worked in large sugarcane fields under harsh conditions, to earn their daily meal. Religion and spiritual beliefs were the only driving forces for the inhabitants who sought the almighty’s blessings to help them get past their many ordeals.

Tips For Visiting The Grand Bassin In 2021

So, what are you waiting for? Plan a trip to the Grand Bassin temple in Mauritius and gear up to soak in the calm and peaceful air, while reawakening your spiritual self.

Looking To Book An International Holiday