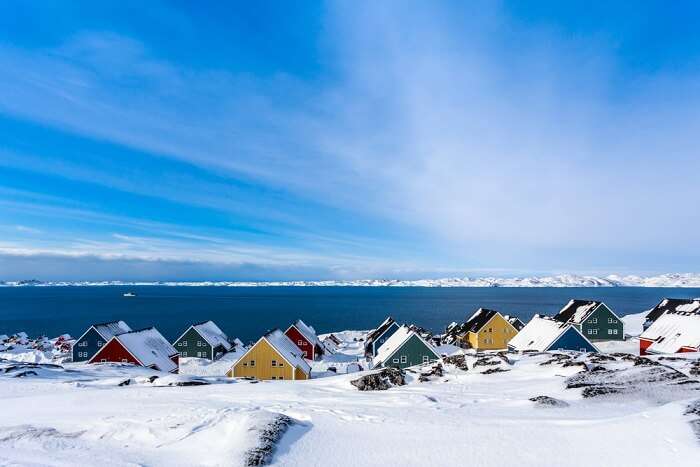 Covered in heaps of snow for the most part of the year and land, Greenland in winter is even more mesmerising as a polar desert. With little or no sunshine seen in the winter months, Greenland has its very own share of nature to appreciate. This Arctic region has a limited population that give a warm welcome to tourists even in the biting cold days of winter. To experience the Greenlandic culture, food and the best of nature’s phenomena one has to visit the country of Greenland in the far north. This column has covered the idea of how to go about in Greenland in winter. Scroll down to know more.

The Greenland weather in winters is undoubtedly cold. The maximum and the minimum temperatures always stay on the negative scale between -20 and -5℃. Once the winter solstice sets in, Greenlanders do not see the sunshine for months together as the sun hardly rises up. The shortest day of winters in December lasts for only about 3-4 hours. Though the temperature stagnates in negative, Greenland weather in winter is very dry. This rare humidity in the land of snow and ice keeps one warm after the climate drops to a certain temperature. When planning the Greenland travel, make sure that you know that winters starts from November and stays up to April after which the short spring season starts.

8 Best Things To Do In Greenland In Winter

Greenland in winter is nothing less than magical. Turning into a winter wonderland, Greenland is all about experiences that definitely involves playing around the snowfall! Here are all the fun-filled activities that are locals’ favorite to enjoy the true and authentic experiences.

The Northern Lights or Aurora Borealis, as it is scientifically called, appears on the dark yet clear skies of Greenland starts from September and stays on till the end of winters. This spellbinding trick of nature is mesmerising to watch as it paints the dark skies with green strokes of light. The lights even stay all day and night dancing in the skies and forming patterns during winter solstice, which is a must-experience phenomenon that one rarely gets to see in a lifetime. One can even have a picnic under the magical lights and enjoy the company of the loved ones.

Dog-sledding originated as a means of transport in the snow-filled land of Greenland. People of the Inuit origin breed and care for dogs especially for this unique experience of travelling. Usually, a sled is led by 6-8 dogs while the owner on the sled controls the way and speed of the travel. The dogs used for such purpose are fierce and furry and mainly feed on smaller mammals. Going around the country when on Greenland winter tours, this is one of the modes of transportation one has to experience. One can easily find locals in the east or northern part of Greenland driving through the snow to transport goods or simply on their way to fish.

The native tribes of Greenland are known as the Inuit people and as the earliest settlers in the world, they have their unique way of welcoming tourists and guests to their land. Visiting Greenland in winter should not be restricted to watching only the Northern Lights but experiencing the Inuit culture as well. The people are generally warm and welcome visitors for a treat on Greenlandic coffee and cake at their home at the drop of a hat. They survive on whale meat and other fishes during winters and are happy to share their meals with visitors. Finding a private home instead of a hotel in Greenland gives one an insight into the Greenlandic culture.

4. Play Around The Snow

A cliched point yet an important one when visiting Greenland in winter is the experience of snow. Almost the whole country is covered in ice sheets that give one an illusion of a polar desert. Walking outside in the winter nights allows one to witness the rare occurrence of the land lighting up due to the reflection of the moon high in the sky. When the sun gets lost in the winters and leaves Greenland in dark, the Northern Lights and the moonlight take up the task of providing the necessary illumination to the land. The sheets of ice and snow reflect their brightness and provide some light for the locals to go about their business. It is very similar to the concept of Midnight Sun in winters. There are numerous places to visit in Greenland to experience the snowfall at its best!

5. Be A Part Of Whale Watching

Winter holidays in Greenland allows one to have the experience of whale watching up and close. Most of the oceanic species are migratory while Greenland is one of the few parts of the world that inhabits species of whales in winters. One can easily spot the bow-headed whale or Narwhal swimming about in the icy ocean. A few sailing trips are available in the country during winters that allows one to spot whales as well as witness the fjords float about in the glacial waters.

Image Source
One of the fun things to do when planning to take all the Greenland winters in, Kayaking is a must-try on the ice cold waters of the Arctic. It is believed that the founders of Greenland probably entered the region while they were on their Kayaks! This is what has led to latching of significance on Kayaking by the locals and others alike. Kayaking is one of the major modes of transportation and offers some of the most impeccable scenic views of icebergs, northern settlements, whales, sealas, and much more!

Imagine sliding slowly in between the snow white icebergs and crossing one town from another. Taking a cruise is, hence, one of the most exciting and beautiful things to do in Greenland winters. The sailors of the cruise get to witness the culture, various cities, and settlements in the most fun and authentic manner possible. One can find an extensive number of itineraries that offer different experiences according to the preferences of the travelers.

Suggested Read: Shopping In Greenland In 2021: 6 Items You Must Not Leave Greenland Without!

Image Source
If you are a little more inclined towards embracing that adventurous inner selves of yours, then try hiking on the rocky surfaces of various hiking trails that are available for the travelers. Greenland is home to some of the most stunning and unspoiled nature that is not all covered in ice and snow during the summer months. Chat with the locals and one gets to know how much they love their outdoor activities and nature. One can get an opportunity to get closer to mother nature and they should certainly grab it on their Greenland travel escapades!

Since the country and its roads are incapacitated by snow in winters, the only form of transport available to reach Greenland is by flight or helicopters. Not only does this imply to reaching the country but also to move around within the towns and cities of Greenland. Greenland can be reached either from Iceland or Denmark. Air Iceland and Air Greenland fly twice a week between the capital city of Nuuk and Iceland or Copenhagen. There are many direct flights from major airlines available from India to Denmark from where one can catch the connecting flight to Greenland.

Considering the adversity of the people of Greenland during winters, it may come as a surprise to encounter their warm and gleeful approach to life in general. Greenland in winter is mesmerising and is one of the must-visit winter destinations that allows one to experience the rarest of occurrences on the face of the Earth. Plan your international trip to witness the miraculous Aurora Borealis and more with your friends and family!

When is the best time to experience the Northern Lights?

The Northern Lights start appearing on the dark skies from Autumn that starts in September and stays on till Late March.

Do we have to depend on bottled waters when in Greenland?

There is no such necessity as the glacial pools and rivers have the freshest waters and visitors are allowed to drink from the lakes as well.

How cold does it get in Greenland in the winter?

Winter in Greenland is extremely bitter. The temperature can get as low as -50 degrees Celsius

Does it snows all year in Greenland?

Yes, it snows almost all year long in Grenland. The maximum summer temperature is 14 degrees Celsius which lasts only for a month.

What’s the warmest it gets in Greenland?

The warmest temperature that has ever been recorded in Greenland is 24 degrees Celsius.

Does Greenland have 4 seasons?

Greenland majorly has three seasons: summer, autumn, and winter. Out of these three seasons, summer turns into winter in a very short span of time. Greenland in August is all about the summer season.

Which is colder Iceland or Greenland?

Out of the two, believe it or not, Greenland is much colder. that Iceland.

Museums In Bulgaria: 12 Wonders That Fascinate All Avid Travelers