10 Best Haunted Places In Egypt That Will Scare You From Head To Toe! 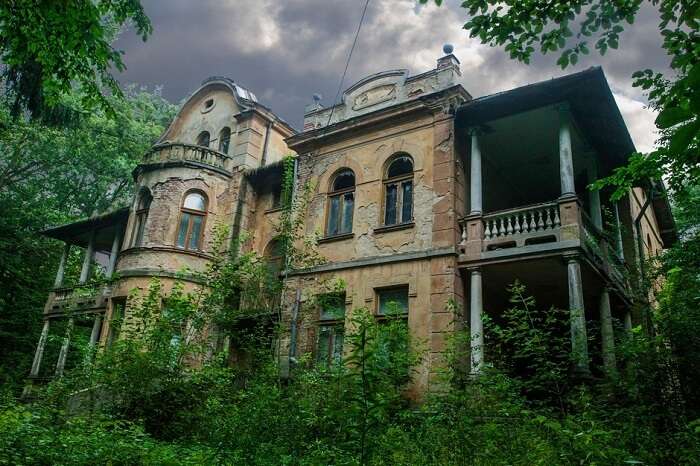 Egypt – a country with one of the earliest now lost civilisation never ceases to amaze the world with its amazing mysteries. Some of its mysteries couldn’t have been solved till date. These mysteries include some of the world’s most haunted places where people have seen ghosts from the world’s oldest civilisation still roaming freely in this old land. Egypt is a paradise for the people who love mysteries but these haunted mysteries are not the one that one should take easy or for granted.

Image Source
One of the most well known haunting place in Egypt. People have seen floating ghosts and walking ghosts. Some have seen ghosts wearing clothes from early 20th century. People have also seen few Egyptian pharaoh there scaring away the people from the Pyramids once which they owned earlier. Residents nearby have reported screaming’s around their residence and voices instructing them to leave the place.

Must Read: 10 Most Magnificent Egyptian Monuments That Will Put You In A Trance

2. Valley of the Kings

Image Source
Egyptian pharaoh – the kings and monarchs have been seen in their traditional Egyptian apparels around this site. Valley of the Kings is place which houses many tombs (few hundreds of them) of the kings and Pharaohs. Tombs have been there since few thousand years. Among them have been the Egypt’s richest and grandest kings who lived on this land. People have seen eerie shadowy ghosts of pharaohs in their full attire roaming around their tombs. This is one of the biggest spooky place in whole Egypt.

Image Source
Akhenaten ghost is reportedly seen by many visitors here. Akhenaten was a monarch who ruled the land of Egypt for 17 years in 1330s BC. He is said to have abolished lot of prevailing rules and faiths and introduced new faith system at his time when he was the ruler of this land. Priest who were unhappy with him are said to have cursed him to wander in the dessert after his death. And he still seems to wandering here under the curse. Although his ghosts seems to be unharmful but is creepy enough to scare the shit out of the travellers in the desert. For this reason many locals avoid going alone in night in Farafra desert.

Image Source
People nearby and guards around the palace have seen ghosts and have heard weird voices coming out of this now abandoned palace. It is believed that Baron – owner of this house used to live here with his wife, daughter and other family members. Baron’s wife died in the palace in very mysterious circumstances. It is also believed that wife was unhappy with Baron due to his extra marital relationships. This made the daughter undergo severe pain and depression, after few months she also passed away under mysterious circumstances. Baron died – and people aren’t sure how he actually died. Due to the jinxed and haunted experiences the other relatives had long left the palace. The site has been very popular among ghost finders and Egyptian tantrics. But after the haunted experiences increased the palace has been shut down for visitors although one can roam around the exteriors of this place. This is among the spookiest haunted places in Egypt.

Image Source
There has been a military training base at Dashour. People have heard gun shots even when there has been no training going on. It is believed few soldiers in training who died here mysteriously are still haunting this place. These are the ones who keep roaming around the whole area near the training facility and also fires the gun shots in air randomly. General public is not allowed near the training areas. The mysterious loud gun shots in this region have remained a big secret of this place.

Suggested Read: 10 Unique Things To Do In Egypt That No Travel Guide Will Ever Tell You About

Image Source
There is a famous haunted house on El Sherifa Dina road in Cairo. it is said that years ago a young girl fell down from the terrace and lost her life very mysteriously in this house. Since then it is believed she has been roaming in here in the whole house. People have reported seeing a ghost of a young girl playing with her toys here. Neighbours around this home have heard screaming and crying voices in the night.

Image Source
Family member of Farouk the king used to live here. It became a morgue for the family members after the members died. Rest of the family members abandoned the place. People have seen light bulbs flicker by themselves without any reason and ghostly shadows with creepy voices. People have reported extremely negative vibes around this site. This remains one of the popular ghostly and haunted locations in Egypt.

Image Source
This creepy highway has seen lot of deadly accidents in the past. This is one of the most dangerous highways in Egypt and has hosted high number of accidents. Many accidents have occurred in very mysterious circumstances where it couldn’t be understood how the accident had happened. Many drivers driving by this highway have reported seen some ghostly apparitions which tries to attract their attention which causes accidents. But the real truth is still unknown. Many parents in the region discourage their children from driving alone across this highway.

Image Source
Ezzat Abou Ouf is a famous Egyptian actor. The famous actor and some people he has hosted over parties at his home have reportedly seen a ghost walking with an old style lamp in his hand. It is said to be the ghost of one of the previous owner of the home, still living in his old home.

Suggested Read: Egypt: Why Is It Called The Gift Of Nile!

Image Source
The building is also known as the Djinn apartment of Alexendria. Due to the many haunted experiences people felt there the building had been locked. The building has been locked since more than 5 decades now. Reason for such ghostly experiences is still unknown. People who used to live here have reported seeing blood being coming out from their taps and loud screaming voices of some ghostly men, believed to be in pain. It is believed that the ghosts might be of the labourers who worked here during the construction of the building and who were tortured by the builder at this site.

Further Read: 7 Best Honeymoon Places In Egypt To Visit In 2021 For A Romantic Stint By The Pyramids

The places mentioned above are mysterious and spooky and one should be careful to not visit the places alone or without any guidance. So, now you know what to do next! Plan a trip to Egypt and get ready to be scared!