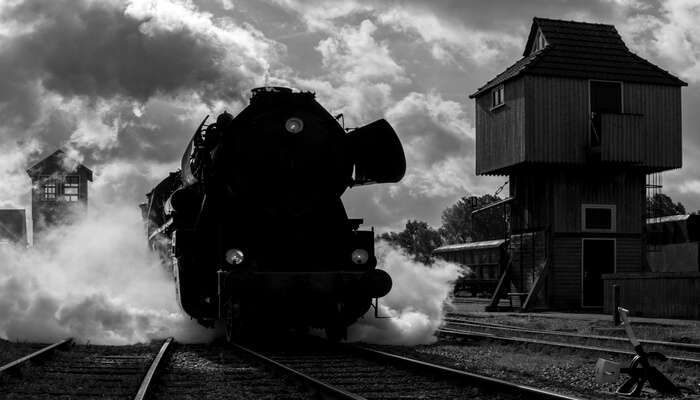 Have you ever sat with your friends curled up in a blanket around a bonfire under the stars on a dark night and listened to spooky stories? Well, we all have. Whenever the topic of scary stories comes up, one cannot escape the dark incidents of many trains and railway stations and as far as this is concerned, a discussion on haunted railway stations in India does not fall behind. Right?

So in this blog, we have assembled intriguing bits of knowledge around 8 of the most convincingly spooky railroad stations in India from the recorded paranormal experiences of a few people. People around the station have given recorded evidence regarding the unnatural occurrences at these railway stations. Read along to know about the railway stations that you must think twice before passing!

Every railway station that people call haunted has been associated with stories and legends that may or may not be true. But nonetheless, there is always an attached fear when the train halts at such stations. So, here is a list of 8 haunted railway stations in India that will spook you for life!

The Barog railway station in Shimla was built by a British railway engineer, Colonel Barog. As the story goes, it is believed that he was given the responsibility to build tunnel 33 at this station. After many days of the commencement of the project, it was realized that the length was miscalculated and hence the entire project became a failure. Rebuked and fined by the government, Barog could not contain his despair and one day when he went for a walk with his dog, he killed himself by shooting himself with a revolver just near the Tunnel at the Barog Railway Station. Since then, this railway station is considered one of the top haunted railway stations in India and every passenger feels their spine chill as they enter the tunnel.
Location: Barog, Himachal Pradesh 173211

This station is situated near Purulia district in West Bengal. The people here have claimed to have seen women in white saree appearing regularly at midnight during the arrival of some of the trains. There have been eyewitnesses too regarding this apparently. As it is believed, these women were once killed in a train accident on the Begunkodor railway station and they appear at midnight because their souls haven’t found peace. The fear around this station is so much that it is often called the ‘ ghost railway station of India’. Spooky, isn’t it?
Location: Begun Kodar, West Bengal 723202

This railway station is one of the scariest railway stations as people here say that thousands of accidents have taken place in this area and a lot of screams can be heard in and around the station. As per some people, a lady is found every night standing and wailing and upon asked why she is crying, she responds that she needs to return home but can’t. The Dombivli railway station in Maharashtra makes it to the list of haunted railway stations in India as numerous reports have been lodged regarding unnatural occurrences.

Both ends of the Chittoor railway station remain deserted in the late evenings due to the fear among the people of Chittoor. It is believed that the station and its premises are wandered by the soul late CRPF official named Hari Singh who was attacked by the RPF workforce on the train going from Delhi to Kerala. Because his injuries got serious, he had to get down at Chittoor railway station and was admitted to a local hospital there only to die within 10 days because of his injuries. Since then, it is believed that his soul has been roaming on the platforms of the railway station in search of justice and vengeance.

The Naini Jail, where numerous political dissidents were tormented once upon a time, lies near to the Naini Junction. It is believed that the ‘ghosts’ of these people who were tormented and later demised, roam around the junction after sunset because their souls could not find peace in their afterlife.

It is believed that the soul of an ex Computer Reservation System official named Subhash, who died in 2004, still frequents this station. Individuals state that Subhash cherished his job a lot and much after his demise, his soul hides around in the Reservation Centre office where he used to work before. Ludhiana Junction is often considered as one of the top 10 ghost railway stations in India.

Suggested Read: 25 Of The Kickass Visa On Arrival Countries For Indians In 2022

This station is said to be spooked by the spirits of the people who were killed by a train while crossing the tracks. Travelers and local people have regularly griped about hearing shouts, howls, and cries during the evening and totally believe that the Mulund railway station is one of the most haunted railway stations in India.

Suggested Read: 30 Budget Honeymoon Destinations In India To Sweep You Off Your Feet In 2022

This ‘ghost railway station of India’ is situated near Bhopal in Madhya Pradesh. Many people have supposedly heard different kinds of voices at the station when the train halted on the platform or even otherwise during the night time in general. These people believe that it is a lady screaming in pain and agony. It is quite scary to imagine the dread of the passengers on the platform!

Further Read: 10 Vegan Indian Food Items That Will Turn You Into A Vegan Overnight In 2022

There are many haunted railway stations in India, each with its own unique story that would frighten you. People of these areas do believe these stations are really haunted and mishappening that occurred was also real. So, whether it is the stories that we believe or the thrill we enjoy, we cannot deny that there is some catch to these stations. We know by now which stations we must avoid!

Are the scary rumors regarding the haunted railway stations in India real?

The rumors are according to the reports available with various sources and for that matter, people around those places have also believed this to be true. so, one may or may not call them real.

Are these haunted railway stations operational?

All the stations considered haunted in India are fully operational.

How many stations in total are haunted in India?

The total number is uncalculated but if the stories are to be believed then there are 8 considered haunted for sure.

Do trains arrive at these stations?

Yes, trains maintain their standard route and pass and arrive at these stations.

Has anyone ever died at these railway stations?

No, there have been no deaths recorded in the haunted railway stations.