8 Best Heritage Places In Mauritius That Are Perfect For The Explorer In You! 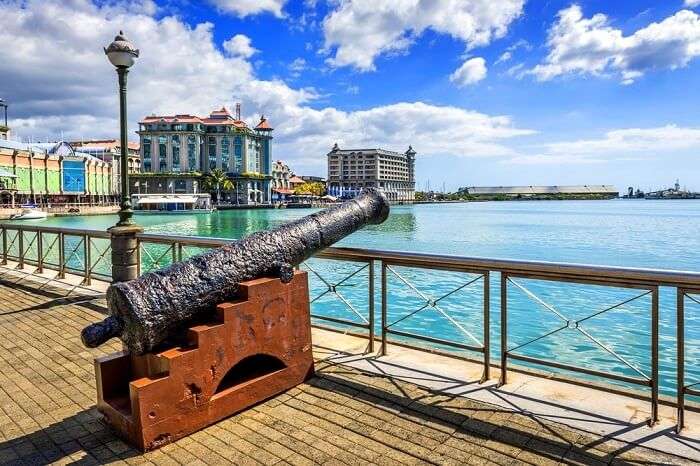 An island nation in the heart of Indian Ocean, Mauritius, is what claims the popular choice award for Honeymoon destination, especially for the Indian travelers. A small piece of heaven on earth, Mauritius is blue and beyond. It is celebrated for its beaches, the blue lagoons and the intricate coral reefs. Give it some time and its mountainous interior will charm your heart away with the sights of Black River Gorges National Park, and the sprawling rainforests. Watch out for voluptuous waterfalls, and spiraling hiking trails. Hike along the jungle and find traces of exotic wildlife like the flying fox! But apart from its geographical wonders, Mauritius offers hidden treasures of its rich colonial heritage. What are these Heritage places in Mauritius? Let’s go on a Heritage hunt while on Mauritius.

If you are planning your next trip to Mauritius, list out all the heritage places in Mauritius that you can never afford to miss. Check out the Capital Port Louis which has sites like the horse-track of Champs de Mars. Don’t forget to plan a trip to the Eureka plantation house and of course the 18th-century eco-treasure of Sir Seewoosagur Ramgoolam Botanical Gardens. You’r ein for a treat!

While Mauritius is home to innumerable attractions, here’s a list of 8 top places that you ought to explore for learning about its heritage and culture. So, start scrolling!

The one ingredient that makes Mauritius what it is today, as we know it, it’s the elixir: sugar. It’s a matter of pride for the island; Mauritius specializes in its heritage of manufacturing the pure and unrefined as well as wholesome and delicate sugars. The sugar produced here maintain its freshness, the essence is retained from its origin. The sugar-cane fields spanning vast homes a Sugar Museum and Factory rising above in the Northwest of Mauritius. The place is also known locally as the Beau Plan sugar mill. The Sugar Museum and factory is the sole narrator of the island’s 250 years of history.

Your next heritage stop in Mauritius has to a visit to the famous Port Louis, the celebrated capital of the island nation which also happens to be the largest city of the island. It’s the brewing hub of the country’s economic, cultural, political and administrative growth. You deserve a wander around the historical corners of this town, a walk through its stone pavements and when you have almost the satisfaction of exploring the island visit ones the nation’s main harbor. It will be reminiscent of the olden days of Mauritius.

Must Read: Discover Scuba Diving In Mauritius: Enjoy The Serenity Of These 8 Sites

The heritage pursuit of your Mauritius trip will be complemented with a visit to the Aapravasi Ghat World Heritage site. Here, you get the full overview of a significant moment in the entire Mauritian history. It’s a historical site which has been now established as a symbol of Mauritian identity. The reason behind its identity politics is the fact that more than 70% of the present local Mauritius population has their ancestors arriving on the very island through this historical immigration depot.

It is a living history in itself, an embodiment of the Mauritius Heritage. This was a sea depot that was built to import indentured laborers who came to Mauritius’s sugar plantations during the early hours of the post-slavery world, years from 1834 through 1920.

Must Read: 10 Best Temples In Mauritius That’ll Help You Uncover The Marvelous Secrets Of The Country

What shall the Heritage hunt in Mauritius bring next? Just a short walk from the port, right off the prime square, you will find the palm-lined boulevard of Place d’Armes, stroll along and it will be a rewarding walk. You can also spend a little time admiring the extravagantly wonderful French colonial buildings. Admire the colonial structures and you will get the feel of the Mauritius heritage. Notice especially the old Government House and the Municipal Theater. From there you can stroll down to visit the Natural History Museum at the center of Port Louis.

Suggested Read: Citadel Fort In Mauritius: A Comprehensive Guide To Help You Plan Your Trip Well

The Heritage hunt in Mauritius is about to get a hike. Your excursion to Port Louis, the capital of the island nation, will be incomplete if you don’t include a visit to Fort Adelaide. The Fort is also called La Citadelle. It was built by the British colonizers of the island at a very strategic location. It sits in the higher lands, in the part of Port Louis that is nearly 240 feet above sea level. The construction of this Fort Adelaide began back in 1832 and it was completed within ten years of that. Climb up to Fort Adelaide; here you can enjoy the picturesque panorama of its view of Port-Louis, the harbor that was historically established and the Signal Mountain.

Time for your next spot to the famously celebrated Eureka House in your Heritage hunt in Mauritius! The house is located by the Moka River and you get the proximity of the waterfalls. What is so special about it? Eureka House stands tall as an authentic and elegant Créole mansion which was built way back in 1830. This 19th century residence had its many masters. It was owned by the colonial era British and French aristocrats. The house is now filled with the traces of its bygone glory. There are antiques kept and memories captured in the photos of the era. The period setup of the house, its furniture and photos prove an intimate glimpse into the colonial life that was once lived within the four walls of this Eureka House. It’s Mauritius’s largest house with 109 doors and windows.

Our next destination on the Mauritius Heritage hunt is the Glass Gallery in the island. Mauritius Glass Gallery is located in the town of Phoenix. Be prepared for a conscious and environment-friendly trip. Here, you get to see all the skilful craftsmen employed in the Glass gallery in their creativity spree. They strive to bring the used glass bottles and many other glass articles back to life. You get a firsthand experience of centuries’ old techniques of traditional glass blowing. You can visit the dedicated demonstration area.

Must Read: A Handy Guide For Exploring Ile Aux Aigrettes Island In Mauritius

Not to forget the splendid and breathtaking landscape of Le Morne which demands your visit, but apart from that Le Morne also holds a great deal of importance in the core of Mauritius’s history and heritage. The history of Le Morne is immersed in slavery and it also happens to be a strong symbol of resistance to slavery. Le Morne has now become the central focus of commemorating Mauritius’s Abolition of slavery.

Further Read: 10 Best Temples In Mauritius That’ll Help You Uncover The Marvelous Secrets Of The Country

You better lock your tour itinerary now! These must-visit heritage sites of Mauritius are places that you cannot afford to miss out on. So, get your maps ready and set out on your next adventure by planning your trip to Mauritius with TravelTriangle right away!

Q. What is the best time to visit Mauritius?

A. While you visit Mauritius at any time of the year, the best time to plan your trip is between May to December. The weather during this time is dry and sunny, which makes it perfect for planning your sightseeing tour.

Q. Which is the best heritage place in Mauritius?

A. There are a lot of heritage places in Mauritius that you must explore on your trip, however, the best one that you cannot afford to miss is the Aapravasi Ghat, which is a UNESCO World Heritage Site.

Festivals Of Canada: 10 Unmissable Extravaganzas That Will Give Celebration A New Meaning In 2020!