A New Discovery In India’s Neighboring Country Could Be The Highest Lake In The World! 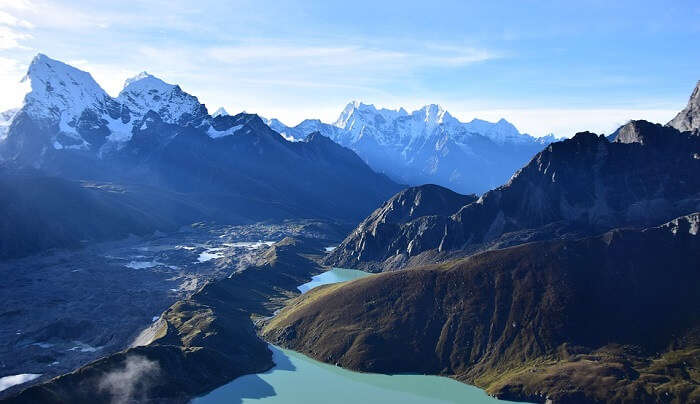 In the scenic mountains of Nepal, the gorgeous neighbouring country of India, a newly-discovered lake named Kajin Sara is all set to become the world’s highest lake in the world! Apart from being the country to having some of the highest peaks, Nepal is now likely to become the country having the highest lake in the world replacing lake Tilicho, which is situated at an altitude of 4,919 m in the same Himalayan nation.

Let’s find out more about how the lake emerged to bless us with another scenic location that travelers would love to explore if given the chance.

A team of mountaineers discovered the lake a few months ago and as per the measurement of the lake by the team, it is located at an altitude of 5,200m, which is yet to be officially verified. It’s estimated to be 1,500m long and 600m wide and once it gets verified, it would officially be declared as the highest lake in the world.

The lake is called Singar by the locals, and is said to have formed out of the water melted from the Himalayas which is partly the effects of global warming. However, the lake can be reached after 18 hours’ trek from Manang district headquarters, Chame and the distance from Chame to the lake is about 24 km.

The best time to visit the lake is considered between July and September, which offers panoramic views of the surrounding peaks such as Mt Manaslu, Mt Damodar, Mt Annapurna and Mt Lamjung, the municipal authorities are already hoping that the newly discovered lake would help boom tourism in the district once it is declared the world’s highest lake.

5 Highest Lakes In The World

These lakes are formed in several ways like glaciers, tectonic plate movements, river and wind currents. When the glaciers melt, water fills the depressions forming lakes and are mostly located in higher altitudes or mountainous terrains. Is Nepal up for a new record? Guess we’ll have to wait it out. In the meantime, let’s check out some of the world’s highest lakes in the world that are truly the most picturesque locations on earth.

Located in the Manang district of Nepal, this lake is currently the highest altitude lake in the world situated at an altitude of 4,919m. Known for an outstanding scenic beauty, this lake is an ideal destination for trekking enthusiasts who traverse the Annapurna Circuit Trek in about 3-4 days.

At an altitude of 3,810m, Lake Titicaca is the highest navigable or large lake in the world that boats can navigate. Straddling the border between Peru and Bolivia in the Andes Mountain, it’s largest lake in South America and the highest navigable water body in the world. Be enchanted by captivating crystal clear blue waters and the stunning landscape surrounding it.

Lake Pangong Tso is the highest grassland lake situated in the Himalayas at a height of about 4,350m. Since its appearance in the famous Bollywood movie, 3 Idiots, the lake has emerged as one of the most desired places to visit in India. The stunning lake is about 134 km long and 5 km wide extending into the Tibet. The pristine lake freezes during the winter months making it a great sight to witness.

Situated close to the Sikkim border in North Sikkim, Gurudongmar Lake is a high altitude lake that is nestled in the high altitudes of Sikkim terrain surrounded by snow-capped mountains, and mountain animals. The lake freezes during the winter months making it a picturesque location to visit. You can follow it by making a visit to the Chinese Tibetan border which is just a few miles away from the lake.

Situated in Russia, it is considered to be the highest freshwater lake in the world. Located in southern Serbia, it contains more water than the North America Great Lakes combined. Lake Baikal is the world’s deepest lake with maximum depth of 1,642, it was formed as an ancient rift valley, with a crescent shape and was declared a UNESCO World Heritage Site in 1996.

Frequently Asked Questions About highest lake in the world

Which lake is situated at the highest altitude in the world?

Lake Tilicho in the Manang district of Nepal. It is situated at an altitude of 4,949m from sea level.

Which is the highest freshwater lake in the world?

Lake Baikal is the highest freshwater lake. It is in the southern part of eastern Siberia, Russia. It contains 22–23% of Earth’s fresh surface water. It is also the deepest lake, having a depth of 1,642 m (5,387 ft.)

Which is the highest lake of India?

Cholamu lake in North Sikkim is the highest lake in India. It is located at a height of 18,000 feet above sea level. You will find more lakes near Gangtok that are astounding and worthy of a visit. Other high altitude lakes in India include: · Gurudongmar, Sikkim – 17,800 ft · Tso Moriri, Jammu & Kashmir – 15,075 ft · Pangong Tso, Jammu & Kashmir – 13,900 ft

Which is the smallest lake in the world?

Lowest Lake or the Dead Sea. Even though it is called the Dead Sea, it is considered to be a lake. It is located in the Jordan Valley of Israel. The water surface in the Dead Sea is 1,340 ft below sea level. It is also known to be the saltiest lake in the world.

Where is the world’s oldest lake?

Lake Baikal in South-East Siberia is the oldest lake. It was believed to be formed some 25 million years ago.

Which is the world’s deepest lake?

Lake Baikal in south- East Siberia, Russia is the world’s deepest lake. It is estimated to be 1,642 meters or 5,387 feet deep. It is also the largest freshwater lake in the world by volume.

Which are the top 10 biggest lakes in India?

Dussehra In Nepal: 6 Unmissable Experiences In Nepal During Dashain 2021

10 Best Hostels In Kathmandu That Offer Best Of Comfort & Hospitality

Paragliding In Kathmandu: 8 Best Places To Get The Perfect Bird’s-Eye View Of The Landscape