An Unexpected Surprise For A Shopaholic Wife: Trip To Dubai 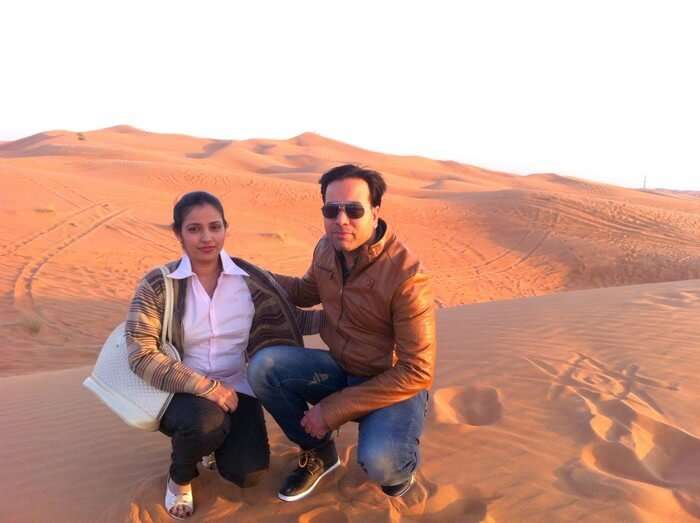 When the aroma of crisp new clothes or the bedazzling shine of untouched jewelry meets a shopaholic on the day of a sale, love is bound to happen, my friend. So when Kapil Chaudhry came in the mood to pamper his wife, the idea of taking her on an exclusive shopping trip to Dubai was simply genius. He booked a Dubai package through TravelTriangle, which included his accommodation, transfers (private), city tour, entry fees and tickets, Dubai visa charges, Ok to board charges — all at INR 1,04,000. Back from the 5 Day fun-filled trip to Dubai, Kapil shares with us some moments from the visit.

On the day I got to know about the upcoming shopping festival in Dubai, the idea of taking my wife to Dubai popped up in my head. I informed her about the plan, but she brushed it off as a joke. She came to believe me only when I showed her the tickets. After that, her preparations began in full swing. She soon came up the idea of booking the package through TravelTriangle and raised a request on the portal. We got a response from 3 agents, from which we finalized one and that’s how the trip started.

Day 1: Arrival in the opulent city of Dubai

We took a flight from Delhi at 7 am and reached Dubai at around 11. The driver was awaiting our arrival and transferred us to our hotel — the Holidays Inn, Deira. Since I travel extensively for work and frequently take my family out for vacations, I have taken the membership of Holidays Inn. So in Dubai too, we stayed at the same. Out of the 2 properties that Holidays Inn has in Dubai, I preferred the one based in Deira, over the one in Downtown. The Deira property allowed me an easy access to the metro, the local supermarkets, and malls, befitting the purpose of the visit.

We relaxed at the hotel for some time, freshened up and went out to explore the local area. In the evening of the same day, we had the Safari on the schedule. We got a pick up from the hotel and were taken for the Dune Bashing. Now this Desert Safari, I believe, is a must for people who visit Dubai. The experience of sitting in the first seat along with the driver, as the Landcruiser smashes the huge sand dunes, is overwhelming beyond imagination. Even though I had been to Dubai earlier with friends and was well acquainted with the safari experience, I felt that the car would overturn at any moment. But my wife’s reactions were an exciting mix – at times she was scared, at times she was laughing and at a certain time I felt that she is about to cry. It was certainly one heck of a ride!

The dune bashing was followed by a ballet dance and buffet dinner. It was a nice evening altogether, except the food. Since the food wasn’t coming across as fresh, we had some salad and juice. The dinner, we had after returning to the hotel. Back to the room, we watched our favorite Bollywood movie and went off to sleep.

All set to explore the city, we prepared to leave for the Dubai city tour. The bus was waiting at the Dubai Museum, the starting point of the tour. The whole affair soon turned out to be a waste, since it was Friday – the day when the whole of Dubai remains shut. As a result, we merely got to drive past the major tourist attractions in Dubai – ranging from the Burj Khalifa to the Palm Jumeirah. Even the Jumeirah Beach was inaccessible due to an ongoing marathon. I conveyed the matter to my agent representative, who apologized and re-arranged the tour for the next day.

The bus brought us back to the museum, from where our driver was to take us to the hotel. Rather than returning to the hotel, we asked our driver to drop us at the Mall Of Emirates. This is where my wife went on a shopping spree, buying things ranging from jewelry, garments, accessories to home decor and what not! For our three-year-old kid back home, we bought a lot of jellies (his favorite) and some toys. But later at the airport, a few toy guns which we had bought were confiscated.

After hours of shopping, we thought of giving the Dubai metro a try. I was pretty keen on trying the Dubai metro since it runs automatically. The metro station in Deira was at walking distance from our hotel. On reaching the hotel we ordered food from a nearby restaurant, Bombay Dining and got it delivered to our hotel room.

Countering the previous day’s disappointment, we had another city tour booked for us. As per the tour’s itinerary, the bus started off from the Dubai Museum. We were taken to the Gold Souk Market, the Mina Bazar, Burj Khalife, the Palm Jumeirah and the Jumeirah Beach – making brief stops at each spot. We had the most romantic time at the beach, walking around, chit-chatting and drinking nariyal pani — with the sun setting against the Burj al Arab in the background.

Suggested Read: Heads Up Shopaholics- The 10 Best Shopping Places In Dubai Are Calling You!

After being dropped at the museum once again, we went for some serious shopping. We visited the Gold Souk Market, from where we bought some gold items, the best of the Arabic designs and gifts for the family. It was very impressive to see the shopkeepers confidently boasting of the authenticity and purity of the gold. Even their law is very strict when it comes to the sale of gold in their market. We retreated to our hotel and had dinner at the hotel only.

Day 4: The Deira mall and the Dhow Cruise

On a day free for leisure, we walked to the nearby Deira City Center mall and spent time shopping. We had our lunch at a restaurant on the Deira road and got back to the hotel. Feeling lazy, we slept off an hour and prepared to leave for the Dhow cruise in the evening. The cruise presented mesmerizing views of the Deira area.

We sat on the corner of the boat, admiring the beautifully decorated boats passing by and the mesmerising view of the city. We also got to enjoy some cultural performances before sitting for dinner. But just like the Desert Safari, we were not satisfied with the food served on the cruise. We returned to the hotel at around 8 pm and slept off the tiredness.

We woke up and prepared a list of the things to be bought. Although we were supposed to vacate the hotel room by 12 noon, we requested for an extension and got a window of 4 extended hours. Then, we went for shopping in the local area – the ten Dirham shop and hypermarkets. With our bags overflowing with gifts and other stuff, we returned to the hotel and checked out at around 4 pm. We had our flight at 8 pm, so we whiled away time at the hotel restaurant having a good coffee. We left for the airport within an hour and made our last attempt at shopping at the custom shop of the Dubai airport.

Suggested Read: 14 Reasons Why Dubai Will Ruin Indians For Life

The trip had turned out to be very enjoyable. My wife also got a good break from work and household responsibilities. Moreover, we managed to steal some good deals on garments, watches, electronics and a lot more items. I even got a pair of my much-desired shades at a very good price, which I feel was the best buy.

High Point: It was fascinating to see gold overflowing in the Gold Souk market. We had a nice time there, having street food and admiring the opulence of the market.

Low Point: The city tour scheduled on a Friday wasted almost half of our day.

Tips to travel to Dubai:

What is stopping you? Steal the deal and book your trip to Dubai, NOW!