Kullu Dussehra 2020: A Week-Long Celebration Of Dance, Music, And Culture 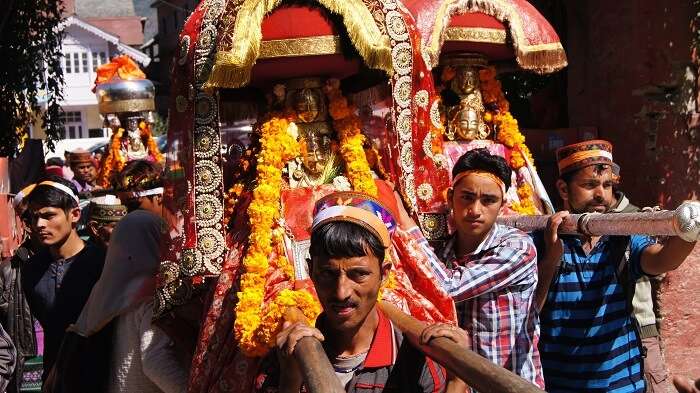 Kullu is famously known as Kulanthapitha, which roughly translates to the valley of Gods. The valley has been a favourite destination for tourists who want to experience the mystical land. Kullu Dussehra festival, which commemorates the local deities and upholds the spirit of good over evil, is celebrated with pomp and show. Our guide to Kullu Dussehra 2019 will acquaint you with the dates of the festival, legends behind it, main procession, and things to do at the time of the event.

Dussehra is celebrated all over India on Vijay Dashmi day, which is the tenth day of Navratri, in the month of October. Kullu Dussehra is celebrated slightly differently from the rest of the country because the festivities in Kullu begin after the nine-day festival ends. This week-long festival, which was declared an international event in 1972, is witnessed by more than 5 lakh people.

There are several legends surrounding Kullu Dussehra festival. One of them is that Maharishi Jamadagni was returning from Kailash Parbat with a basket full of idols of eighteen different gods. While crossing Chanderkhani pass, he was caught in a storm where he saw these images take the form of Gods. These Gods saved him from further suffering. As a result, people celebrate these Gods with great fervour.

Must Read: Georgia To Introduce eVisa For Indians: Getting Visa Gets Easier

Kullu Dussehra Program In The Day

Dussehra celebration in Kullu kick starts early in the day. On day one, 200 village devtas (deities), including Lord Raghunath, arrive in palanquins to the valley. They’re carried by messengers on foot. These messengers are handpicked by the locals among themselves. The deities assemble at Raja Rupi Palace before proceeding to Dhalpur Maidan. They are decked in garlands and draperies and decked with silver masks.

Suggested Read: From Royal To Offbeat, Here Are 23 Best Wedding Destinations In India To Tie The Knot In 2020!

At night, several cultural events and activities are held. Dussehra celebration in kullu is famous for its night program. With drums beating and trumpets blaring, it makes for a wonderful source of entertainment. The local deities dance, ie charge backward and forward and tilt from side to side, before settling down. The image of Lord Raghunath is placed in a chariot and the ropes of the chariot are pulled by the devotees.

The latter half of the week is dedicated to Kullu Dussehra Mela, a huge retail fair which takes place in Dhalpur Maidan. The fair is famous for local dance and music performances. The locals start practicing six months prior to the big event for putting up a spectacular show. The final day of the celebrations are reserved for animal sacrifice. At the mela, a fish, a crab, a buffalo, a rooster, and a lamb are sacrificed in a huge bonfire.

Suggested Read: 21 Budget Honeymoon Destinations In India To Sweep You Off Your Feet In 2020

How To Reach Kullu

Indira Gandhi International Airport is located at a distance of 16 km from the New Delhi City Centre. The airport is located at Palam and is known to be one of the busiest airports in the country. Daily flights are provided by Air India and one can take the earliest flight to leave from Delhi at 6:45 AM. Delhi is 497 kilometres away from Kullu by road, which can be easily covered in 9 hours by car, bike or state bus, if everything goes smoothly.

Suggested Read: A New Discovery In India’s Neighboring Country Could Be The Highest Lake In The World!

Where To Stay In Kullu

This decision depends on your choice of place and budget. You can stay in Hotel Shobla Royale if you want a luxurious stay. The hotel is equipped with world-class facilities and is a popular favourite among foreign tourists. Hotel Kullu Valley, on the other hand, is closer to the venue and has a balcony attached to the rooms from where you can gaze at the mountains while sipping a cup of hot chocolate.

Further Read: Delhi To Mumbai In 10 Hours By Train Now Made Possible By Indian Railways

The Dhalpur ground is decorated with colorful flowers and tents, which change the overall getup of the venue. Among a variety of dances in Kullu like Ghadai, Panjragi, dohri, Pheti, Lahuli, Kortha, Charase-Tarase, Bandhu, Rakhs, and Phagli etc, Lalhri dance is very popular. Book a trip to Kullu right away with TravelTriangle to avail exciting deals and discounts to watch live Kullu Dussehra. This trip will be worth your time and money.

Maldives Vs Andaman: Which One Will Make The Cut For Your 2020 Vacation?