10 Mesmerising Lakes In Tanzania That Are A Treat For Sore Eyes! 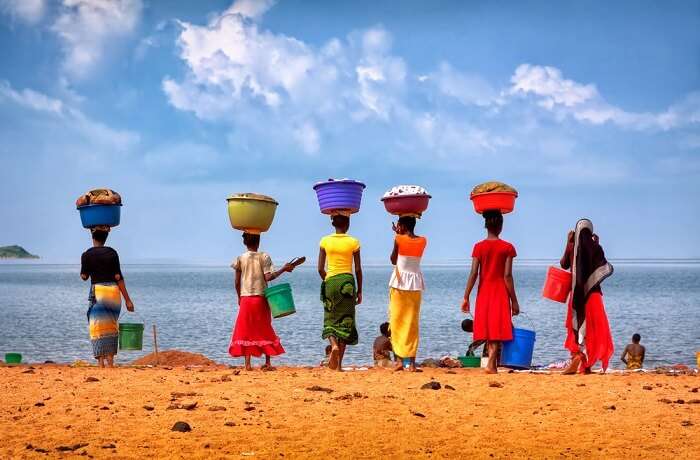 Most tourists know Tanzania for the exotic wildlife, the exceptional Serengeti plains, and the charming island of Zanzibar. However, there is still a lot more to this country that goes unnoticed by most tourists, like the many pristine lakes this country has. While focusing on going on safaris and catching the animals in their natural habitat, people lose out on visiting these hidden gems and spending some quality time with nature, such as these lakes in Tanzania where you’re surrounded by nothing else but peace and quiet.

If you are someone who loves to explore a country beyond the commercial points of tourism, then make sure to read our guide on the top ten lakes that are definitely worth a visit if you’re planning a trip to this country.

The Most Beautiful Tanzania Lakes

The best part about Tanzania is that it has no real winters, and except the rainy season, which is between September to November, there is no wrong time to visit the country. December is the best season to visit the country because of the pleasant weather you can find during this time of the year.

Kicking off the list of lakes in Tanzania is Lake Victoria, a part of the African Great Lakes. With a surface area of 68,800 square kilometers, this is not only the largest lake in Tanzania and Africa but also the second largest fresh lake in the world. One can take a dip in the clear fresh waters of the lake, and there are also boat services that take people into the deeper parts of the lake. While in Tanzania, one should definitely not miss on seeing this hidden gem of nature, and also to enjoy the peace and quiet surrounded by nothing other than clear waters and fresh air.

There are many things which make Lake Tanganyika one of the most special lakes in Tanzania. First, it is the second oldest freshwater lake in the world. Apart from that, it is also the second deepest and the second largest by volume lake in the world. However, that is not all. The most unique thing about Lake Tanganyika is that is runs along four countries – Tanzania, Congo, Zambia and Burundi, and it also makes the border between Congo and Tanzania. A number of islands surround the lake and you can hire a boat to go deeper into the lake and check them out. Lake Tanganyika is also one of the best rift valley lakes in Tanzania.

Location: African Great Lakes
Tip: This lake is a great place for fishing.

This lake is located between three countries – Malawi, Mozambique and Tanzania and is about 570 kilometers long. Lake Malawi has more lakes than any other lake in Africa, and apart from the fish, you can also find some wild animals like the Nile crocodile, monkeys and hippopotamuses, along with some African fish eagles. Apart from this vast array of animal and aquatic species, the Lake Malawi National Park, one of the best National parks in the country, is located on the southern end of the lake.

Covering an area of 2,600 square km, Lake Rukwa lies midway in between Lake Nyasa and Lake Tanganyika. An interesting fact about this lake is that the size of the lake keeps fluctuating over the span of years and is almost never contact. For example, in the year 1929, the lake was 128 kilometers long, and today the lake stretches for a length of 180 kilometers. The fluctuation of the lake is caused by the varying inflow of streams. The lake is alkaline, great to take a dip in, and is surrounded by beautiful green hills and islands, which makes it a delight to look at.

Location: Southwestern part of Tanzania
Tip: Boat services are available on the shore.

Lake Natron in Tanzania is a large saltwater lake in the eastern part of the East African Rift. It is one of the smaller lakes, and stretches only for a length of about 57 kilometres, and tends to be a little shallow, however, it varies with the depth, so be careful if you decide to go swimming. An interesting fact about this lake is that the color appears to be red due to the high levels of evaporation, and therefore this gives the lake a very copper like color, something you won’t find in the other lakes. Though there isn’t much wildlife near the lake, you will still find some fish and birds like flamingoes on the lake, if you are lucky.

Location: Northern part of Tanzania
Tip: December is the best time to visit this lake.

Although this is one of the more shallow Tanzania lakes, don’t be disappointed, as it makes up for it in other ways. And it has even been called by Ernest Hemingway as the “loveliest lake in the world”. Covering an area of 231 square kilometers, the lake, located in the Lake Manyara National Park, has an array of wildlife species living in the premises, and you can also get some breathtakingly beautiful views of the park in the distance. Truly living up to its name, if you want to be surrounded by the beauty of nature, this is definitely a place for you to visit.

This is yet another small lake in Tanzania, a part of which is situated in the Burigi Game Reserve, making it famous for some exceptional wildlife species that can be spotted on the lake. Though the lake stretches for only about 18 kilometers, it is quite beautiful to look at with green hills surrounding the lake on both sides, because of how narrow the lake is. Some of the wildlife species of animals and birds of Africa that can be found at the lake are cranes, pelicans, herons, janacas and egrets. You also have a good chance of spotting a hippopotamus at this lake.

Location: Karagwe district, Kagera Region of Tanzania.
Tip: Bring mosquito repellent as there are a lot of mosquitoes near the lake area.

Located on the border between Kenya and Tanzania, you can find Lake Jipe, which is protected on one end by the Tsavo West National Park in Kenya and on the other side by the Mkomazi Game Reserve in Tanzania. The lake boasts of a rich biodiversity and a lot of species of birds and fish can be found in the lake and the surrounding areas. Cyprinoids and siluriforms form the majority of the aquatic life in the river and the bird species include cranes, storks, pelicans, egrets and many more.

Location: Border of Kenya and Tanzania.
Tip: Lake Jipe is the tenth largest lake in Tanzania.

One of the oldest lakes in Tanzania, formed around 250,000 years ago, Lake Chala, otherwise known as Lake Challa is another lake located on the Kenya-Tanzania border and is surrounded by a large crater on all sides. The lake is home to the Lake Chala tilapia, a fish species that are becoming critically endangered and the country is putting its best efforts to save the species. Long ago, the lake used to be inhabited by crocodiles, but since they proved to be a nuisance to the people living near the lake, they were slowly wiped out.

Location: Border of Kenya and Tanzania.
Tip: This lake is great for swimming.

One of the best places to spend a relaxing day at, this is the perfect lake to do some canoeing, swimming in the shallow waters of the lake, interacting with the warm local people, and just lazing around and basking in the sunny weather of Tanzania. This lake is also a great place to spot some hippopotamuses just lying and lazing around on the grass, as happy as can be. However, make sure to visit fast, as the hippopotamus sightings are becoming rarer.

We hope you enjoyed reading our list of the top lakes in Tanzania, and if you would like to plan your next holiday in tanzania, now is the perfect time to book your trip, pack your bags, and head out with your loved ones! Don’t forget to tell us about your memorable experience!