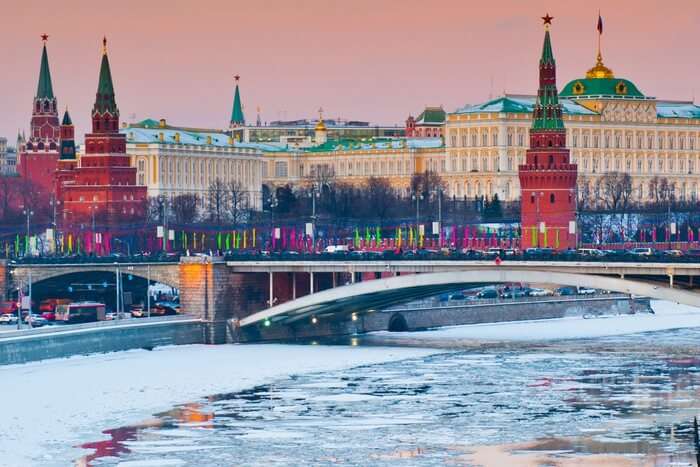 Holidays And Moscow Events In January

1st January is the new year’s day in Moscow which has been celebrated with extreme fun and pop. Some people even celebrate New Year’s Day on the 14th of January. It is always recommended to take a long coat, scarf, gloves, a hat, and boots with you to enjoy the outdoors festivals and events of the city in January. Pack your bags as per extreme cold Moscow weather in January 2020.
7th January is celebrated as Christmas day in Moscow. It is always worth watching the city during this time. The fun, pop, show, and celebrations are at the peak during this time.
The Russian winter festival is also celebrated in January. You can visit Moscow in January to get an opportunity to have all the fun. It will make your trip memorable for life with lots of unique experiences which you can have only in winter season.

9 Things To Do In Moscow In January

Here is a list of the exciting things to do in Moscow in January 2020. You will surely enjoy your trip as Moscow becomes really pleasant and cold during the time. Keep up with the festive spirit of Moscow that still persists after the new year. Have a look at the top things to get involved in before you plan your trip Moscow.

1. Snow Fight: The Most Enjoyable Activity

Snow fights are one of the most enjoyable things which you can relish during winters. Hitting snowballs on each other would revive your childhood memories. Do not forget to keep your face safe during the snow fight. Your experience will go wasted if you do not end your day by building a snowman.
Taking pictures is a must; you will remember all the mess you have created whenever you will see these pictures.

2. A Romantic Dinner: The Cozy Experience

Moscow has a wide number of dining cafes and restaurants that are quite popular globally for their cozy comfort. The cafes and restaurants will give you great dining experience. Experiencing the delicious taste of various cuisines in several restaurants in Russia.
The most romantic thing is to drink hot chocolate while snuggling on the sofa in extreme cold with slow music. Isn’t it? The imagination of such a scene is enough to create great moments and just thinking about this time you will spend in Moscow will give you goosebumps.

Suggested Read: Honeymoon In Russia: Romantic Places That Add A Spark To Your Trip

3. Enjoy The Festive Season Of Moscow: Feel The Vibes

People in Moscow start preparing for New year’s day from December and the fun, pop of the festive season goes till the mid of the January. You can’t forget this time for any cost if you are a traveling freak. This is the time when the place turns into a magical place which is worth watching and enjoying. Visit fairs held during January, located on the central streets makes you have a lot of fun.

4. Christmas Traditions: Be A Part Of The Celebrations

Christmas in Moscow has always been celebrated on 7th January and not 25th December. Isn’t it great news? You can now celebrate Christmas twice in an year. If you visit Moscow in January, then you will have a chance to see the largest orthodox temple in Moscow. Head to the city and know how they celebrate the festival in Moscow.

5. Cruise On The Moscow River: An Ice Breaking Experience

Have a special marvelous view of the city with the Moscow river cruise. Earlier, that cruise was only available during the summer seasons but now you can also enjoy the river cruise in winters. The boat used in icebreaker cruise has the capability to break up the crust of ice on the Moscow River which makes it possible for you to enjoy a cruise in winters.
In this cruise, you can also enjoy lunch or dinner as per your preferences.

Painting on snow competition has been held in winters and mostly in January in Moscow. In this competition, people with their families come to participate in the competition to show their talent of painting on ice. It is such an amazing scene to witness and you just can’t afford to miss it if you are planning to visit Moscow. Be a part of this amazing painting snow competition and watch families paint wonders on sheets of white snow. If you get a chance, try your hand at painting too!

Suggested Read: Visiting Moscow In December? Build A Snowman In The Frozen Winterland On Russian Vacay

7. Wallow In The Snow: A Great Time To Enjoy

Visit Kolomenskoe fall onto the pillow of snow and pull your friend there as well, just to reignite your childhood desires. Moscow is covered in sheets of snow in January and one can have a great time enjoying in the snow. A never-ending fun is totally assured, as when it is about having fun in the snow, age is just a number. Go ahead and make snowman and more in Moscow in January. If you are visiting Moscow in January with kids, then this is one of the top things to indulge in.

Suggested Read: Moscow In Winter 2020: 10 Things To Do In The City That Holds To The Key To Russia’s Past

The shining beauty of snow always enhances the creativity you have. In January, there is plenty of snow in Moscow to create a legion of snowmen and click your pictures with those. You will have lots of fun. There are many snowman competitions held here as well, look up for those. Visit Moscow in January to enjoy the plentiful of snow in the city. Participate in these competitions and let your creativity flow as you make an enormous fun snowman.

Suggested Read: Summer In Moscow: Soak In The Mesmerizing Landscapes Of This Stunning Russian City!

9. Winter Sports In Moscow: Enjoy The Slides And Tracks

There are many parks throughout Moscow that have ice skating pathways. Enjoy ice skating on dozens of ski tracks available throughout Moscow. Enjoy tubing and ice slides sports in Moscow during January. There are lots of sporting activities to do there during the winter season. You will have lots of unforgettable moments in Moscow in January. Skating and skiing too are some of the activities which you will love to experience.

Moscow is a place that lets you do a lot of things whether you are an outdoor freak or a calm, indoor person. People of Moscow wait for January to come and enjoy above-mentioned things. It is always a great opportunity to visit Moscow in January which you should not miss at any cost. January is always considered to be the best time for vacation in Moscow, as you can watch lots of events and enjoy festive occasions.

Q. How cold is Moscow, Russia in January?

A. Moscow in January has temperatures ranging from -5°C to -10°C.

Q. What is the best time to visit Moscow?

A. The best time to visit Moscow is late spring but if you like winters then Moscow temperature in December and January in Moscow can be exciting too.

Q. Is it always snowing in Moscow, Russia?

A. No, it begins to snow in September in Moscow, Russia.

Q. Does it snow in Moscow in January?

A. There is an average of 12 days of precipitation across the month of January and you’re more likely to get a taste of fresh snowfall in Moscow. The city’s does come under the influence of winter storms that affects both air and car travel in the area, so be prepared.

Q. How cold is Russia in January?

A. Moscow in January gets bitterly cold, with an average temperature of -8°C, and temperature usually ranges from -6°C to -10°C. If you visit Moscow during this time of the year, get ready to brave heavy snow and freezing conditions.

Q. What is there to do in Moscow in winter?

A. There are a huge variety of things to do in Moscow in winter including participating in snowman competitions, witnessing the splendor at Gorky Park, enjoy ice hockey competitions and get enchanted by the theaters.

A. Contrary to popular opinion, Russia, especially Moscow is perfectly safe for tourists. Much like other places in the world, if you don’t bother anyone, no will bother you in Russia too. But it is important to always be cautious of the surroundings.