Moscow In Winter 2021: 10 Things To Do In The City That Holds To The Key To Russia’s Past 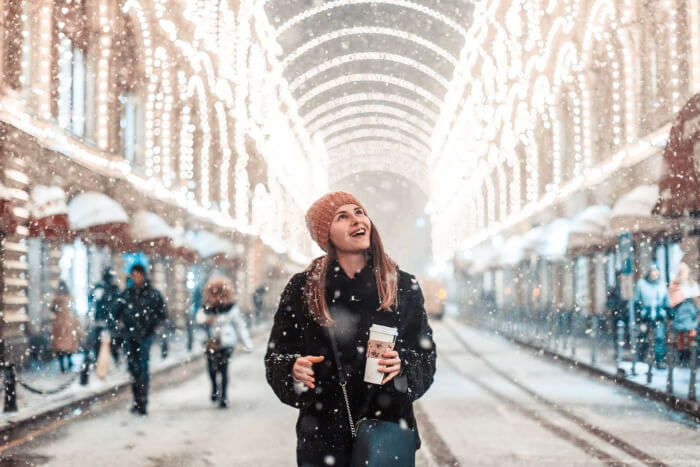 Moscow is the capital of Russia, the cold wonderland sometimes also called the Motherland, by natives. While it is true that Russia is one of the coldest places in the world, a temperature that some people may find to be very disturbing, one should never assume that this has stopped the people from visiting it. Here are a few things to do in Moscow in winter.

10 Things To Do In Moscow In Winter

Thinking what to do when Moscow weather in winter in chilly and pleasant? When visiting Moscow in winter, there are several things that regular tourists miss out on. Whether one is talking about lesser known but awesome sights, places to visit in Moscow during winter that pack excitement like nothing else or thrilling things to do, the Motherland has plenty of each!

Image Source
Now, residents of elite European nations like the British or the Americans may think that they know how to celebrate Christmas, and they do so with party light, plenty of poppers and Christmas trees galore. But, and trust me here, Russians truly know to celebrate Christmas. Being one of the 12 Feasts, and one of the four most important ones, Russians go absolutely crazy on Christmas, as they participate in all night vigils, praying in millions and feasting like never before! Christmas in Moscow is a festival to experience at least once in the lifetime. They have a single for each of the 12 apostles, which means a whopping total of 12 side dishes! It is promised to be one of the best Moscow Winter Festivals, 2021. Moscow winter calls for some most amazing times!

Image Source
Ever been to a zoo that is the size of a city? Well, the Moscow Zoo may just be larger than some small cities and hence, one of the must visit places in Moscow! A sprawling complex that houses animals from over a thousand different species, one can see just about any animal they want to in this awesome zoo. Moscow Zoo is famous for its conservation efforts, as one can witness first-hand how they try to repopulate almost extinct species. One can also attend one of the many lectures, seminars, and tours there, to know more about the Zoo, it’s awesome animals and its conservation efforts.

Suggested Read: Moscow Nightlife: For A Lively Vacation In The Russian City That Never Sleeps!

3. Ice Skating On The Red Square

Image Source
Undoubtedly one of the most famous sights in Russia, the Red Square is one of the most historical places in the country, as it was here that the fate of Russia was fought over by the Nazis and Russians. However, .winter here is much more amazing than one would think, as a rink goes up early in the winter, and hundreds of excited skaters arrive with rollerblades in hand. We really recommend trying out this experience in Moscow!

Image Source
Shunut Mountain is the absolute highest point of the entire Ural Mountains and can be quite difficult to reach because of all the snow. However, one can take this often breath-taking tour, where they use snowmobiles to get to Shunut Mountain. Starting from Ekaterinburg, this tour is very famous among both tourists and natives alike. You must give it a try if you are Moscow in December!

This is by far one of the most well-known tours on this list, as not only is the center of the most beautiful things to see in the entire country, the tours arrange for transport to and from the country itself, food, lodging and everything else that the guest could need, providing a surreal experience for those who take it. Arriving in Moscow, this tour slowly makes its way towards the countryside of Russia. Aside from the sights, this trip also makes people realize what to wear in Moscow in winter- the heaviest clothes they can!

Suggested Read: Summer In Moscow: Soak In The Landscapes Of This Stunning City In 2021!

This tour not only visits one of the most famous viewpoints in the country, but it could be that the journey would be far more exciting than the destination. Now, you would be thinking why, and the answer is that this tour does not use conventional types of transport. Instead of buses and cars, you will be riding on ATVs, a type of quad bike. Both the journey on quad bikes and the destination- the Bshad Sgrub Gling Buddhist Temple- are sure to be very exciting! This trip gets even more exciting with the inclusion of winter weather in Moscow, making the trip even more challenging.

Image Source
Now, this may seem weird to some people, but one of the most famous statues in Russia is the Giant Lenin Head. Displayed at Ulan Ude, this is the tallest depiction of the leader ever shown, as the head towers 25 feet above the ground. Weirdly, this is one of the most popular places for newlyweds to take pictures, though that logic may be a bit flawed. Seeing this place in winter is even more worthwhile, as the head is often decorated with a hat of fresh snow.

8. Tour Around The Garage Museum

Image Source
One of the most technologically advanced museums in the entire country, this museum is housed in the former restaurant Seasons, a booming business in the 1960s. However, today it is one of the most famous museums in the country, as it has five different exhibition halls, a media space and a huge educational center full of interesting sights to see. When on a trip to Moscow, you should pay a visit to this beautiful museum in the Russian capital!

9. Play Around At The Planetarium

If you have a thing for planets and the meteoroids, do add the planetarium in your list when visiting Moscow in January. This Planetarium is an interactive spot that hosts some of the most beautiful music performances as well. From giving travelers a chance to glance at the various aspects of space to indulging in some of the most entertaining games, this Planetarium has got it all. One can also take a guided tour to roam around and understand the planetarium to the fullest.

Suggested Read: Honeymoon In Russia: Romantic Places That Add A Spark To Your Trip

10. Treat Your Palates At Sokolniki Market

Visiting Moscow in winter can turn out to be a splendid time, especially for your taste buds! Located just a few steps from the Sokolniki metro station, one can hear the hustle and bustle of the crowds as the shopkeepers and consumers negotiate. Upon reaching the market one can witness small mountains of some extremely colorful and fresh fruits and vegetables. With the smell of barbeque mixing in the air with the aroma of coffee, this market is perfect to visit to experience the true Moscow life!

Further Read: Enjoy A Joyous Christmas In Moscow With These Vibrant & Unique Experiences In 2021

After reading this list of things to do in Moscow in winter, one would naturally come to the conclusion that visiting Russia at least once in their lives is a must, as this snowy wonderland, and all of its varied and different wonders, is not a sight to miss!

What is the average temperature in Moscow in winter?

The average temperature ranges from 4°C to 13°C in Moscow city in winter.

How cold is Moscow in winter?

The average temperature ranges from 4°C to 13°C in Moscow in winter.

Does it snow in Moscow in December?

Yes. In December the weather in Moscow is unusually cold and wet because of the snowfall.

How much snow does Moscow Russia get a year?

It begins to snow n December in Moscow and continues till the end of March. These are the months that Moscow experiences snow.

What is the coldest month in Moscow?

In Moscow, the coldest month lately has been February. The starting of this month is usually the coldest time in the city.

Can you wear jeans in Russia?

Yes, one can easily wear jeans in Russia when going for a casual outlook.

What should I wear in Moscow in winter?

In the winter season in Moscow, one is expected to wear boots, heavy coats, gloves, socks, scarves, shoes, and hats to bear the cold.

Thinking Of Spending Spring In Moscow In March 2021? Here’s Why It’s A Good Idea!

New Year In Moscow 2021: Spend Your New Beginnings At These 9 Best Places

15 Interesting Things To Do In Moscow: Trekking, Opera, And More In 2021

Summer In Moscow: Soak In The Landscapes Of This Stunning City In 2021!