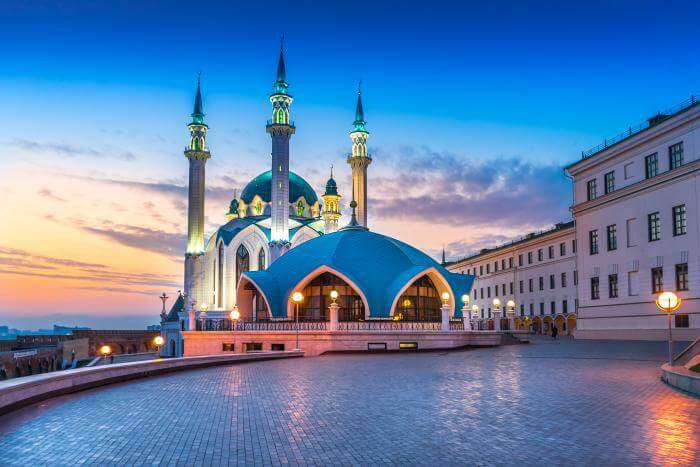 Some of the beautiful architectural structures can be seen in the ancient mosques in Russia. It is said that 20% of Russians are Muslim. These places are not just of attraction for Muslims but for people of all religion an background. One can enjoy the culture and heritage of the place while learning, exploring and enjoying a visit to Russia.

8 Most Famous Mosques In Russia

To enjoy and understand the architecture and historical background of some of the most famous mosques in Russia, here is our detailed guide:

This Mosque is titled as the tallest mosque in Europe. It has space which can contain approximately 10000 people. The mosque is a 6th-floor building and within it, there is a fantastic library. Apart from this, there is also an exhibition space where many artifacts are displayed. With many halls and spaces to prayer, this Mosque possesses some of the best architecture in the country. It is very obvious that it would get that number one place within the list of most beautiful mosques in Russia.

Situated in Gronzy, this beautiful Mosque has a full marble finished interior and for outside decor, travertine tiles are used. The Mosque has got its name from the very first president of the Chechen Republic, Akmad Kadirov. The most surprising thing about this Mosque is that you will be able to see 24/7 live broadcast bye why this religious building. The four minutes in the structure are 63meter tall and the beautiful dome is measured as 32 meters in height. The building can house 10 thousand worshippers at a time.

It is a white painted structure and from a distance, the mosque looks like a place from Paradise. As it is very similar in structure and color to the Taj Mahal in India it is also called by local people as ‘Karan Taj Mahal’. The place has its name listed in the UNESCO a World Heritage Site. The first-floor room is for women to pray while the second-floor hall room is for men. You must see the world’s largest Quran decorated with gems in here. It is 800 kilograms in weight and at least 16 people are needed for assistance to move the book from this place.

Suggested Read: It’s A Good Time To Be A FIFA Fan If You Want A Visa-Free Entry In Russia

One of the largest Russian mosques and is considered to be a beautiful addition in the Islamic culture of Russia. Located in Ufa, this mosque is again very rich in culture and heritage for the Muslims in Russia. It has the tallest twin minarets in the country at 53m. They are shaped like blooming tulips, giving the mosque its name. This mosque just like others has separate entrances and rooms for men and women and is a beautiful addition to the scenic beauty. It can house over 1000 people at the same time.

5.The Kul Sharif of Kazan

The Kul Sharif of Kazan stands at the location where the minaret temple stood and then was destroyed late in the 15th century. This mosque has six high minarets each of 55 meters high. This mosque is said to have the most number of minarets. They are all a part of the Kazan Kremlin Complex. In fact, it was described as the World Heritage Site in the year 2000. These days the mosque is displayed as a museum of Islam and receives a lot of public attention due to the exhibits.

This unique mosque in Russia is located in Vladikavkaz and can accommodate around 5000 worshippers. It is named after an Azerbaijani millionaire of the same name, who financed its construction. If you are planning to visit this place then you will not be disappointed sheerly due to the peaceful and calm environment and amazing aura that will envelop you. Constructed in the 1900s, it is set in the backdrop of the Caucasus Mountains and has 2 beautiful minarets.

The Jumah mosque is located in Derbent. This was built in 750 AD and is one of the oldest mosques in Russia. This mosque has been identified as the UNESCO cultural Heritage center. Apart from the mosque, there are other buildings such as a library, publishing house and an office of the Imam. You should definitely give this mosque a visit, not only due to the UNESCO tag but also due to the ageless wonder it fills you with. Also, you must

This is not just a mosque but a cultural hub and education center. It consists of a madrassa, a historic and cultural center. In fact, there is a hotel as well. The place is a perfect spot for tourists from all religions and not just Muslims. It is really a great place to enjoy some peaceful time. This would help to dive deep into one’s inner soul and look into one’s own self. It is an experience you do not want to miss.

Among all the different attractions, there are quite a number of mosques in Russia which are worth visiting. Along with the beauty and grandeur, these mosques are also a powerhouse and backbone of Islam in the country. These are the places that you cannot afford to miss if you are planning your next vacation to Russia.