Visit These Most Dangerous Places In The World That Are Not For The Faint-Hearted In 2022! 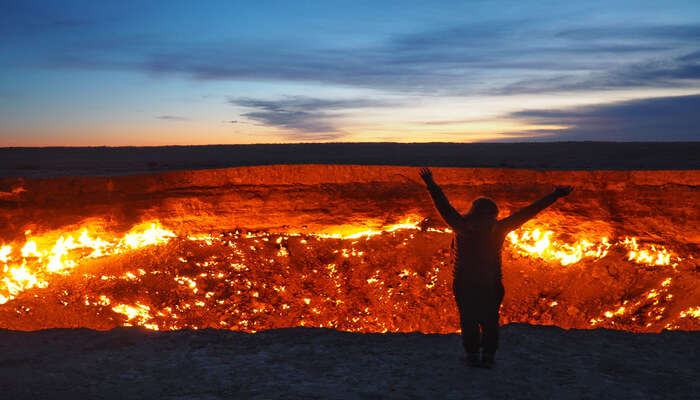 While there are plenty of places in the world that would easily pass as the reflection of paradise, there are others where one is not even advised to tread owing to unknown dangers that lurk in every corner. Here, we have talked about exactly those places that one must NOT visit if they’re looking for the ideal holiday destination which is also safe rather than just being pretty. For all the people who are in the mood of having a world tour, then it is advisable to avoid certain places that are proven as the most dangerous places in the world to visit. We have listed some of the most dangerous ones among them right here. If you are ready for some serious adventure, these places are meant for you.

10 Most Dangerous Places In The World

If you weren’t aware of all these most dangerous places to visit in the world and had them in your bucket list all this time, you’re in for a (nasty) surprise! Scroll down and take in the horror!

North Yungas Road is known as the “Death Road” for all the right reasons that you can guess. Driving up or down this 43-mile (69-kilometer) switchback is extremely dangerous because of fog, landslides, waterfalls and cliffs falling 2,000 feet (610 meters) in each turn. Until 1994, almost 300 drivers were killed every year, justifying its nickname and putting it in the list of the most dangerous places to visit in the world.

The road extends far enough to connect the Amazon rainforest to the capital city, surrounded by mountainous terrain. This means that merchants were not unusual to cram into trucks and buses trying to sell their wood and crops in the area. The hairpin turns, however, were not wide enough for each vehicle — further leading many trucks to go down with people and their livelihoods.

Must Read: 15 Rivers Of The World: Soak In The Mesmerizing Sights Around The World

There is an island about 25 miles off Brazil’s coast where no local would ever dare to walk. There are rumors that the last fisherman who strayed too close to his shores was found drifting in his boat days later, lifeless in a blood pool. The mysterious island is known as Ilha da Queimada Grande, and setting foot there is reportedly so dangerous that the Brazilian government has made it illegal for anyone to visit. The island’s threat comes in the form of the golden lancehead snakes – a pit viper species and one of the world’s deadliest serpents. The is certainly the most dangerous place on earth.

Suggested Read: 10 Marvelous Rock Formations In The World Which Will Leave You Mesmerized

3. Lake Natron – The Most Inhospitable Areas On Earth

Let’s not allow the ring of salt marshes along the edge of Lake Natron fool us. This lake is better known as one of the most inhospitable areas on Earth. North Tanzania’s Lake Natron looks and acts a lot like a lake of fire. The lake’s high levels of Natron (sodium carbonate decahydrate) make its waters corrosive to human skin and eyes, sometimes reaching a ph level of over 12.

The lake also contains red-colored bacteria, resulting in its unique pink-red hues. Even if most species cannot handle the 120-degree lake water, cyanobacteria have made Natron their home and turned the lake its trademark reds and oranges. Surprisingly, 2.5 million Lesser Flamingos call Lake Natron their home, considering that it is one of their only breeding grounds, further making the protection of the lake a priority for the climate. It is among the 10 most dangerous places in the world.

Oymyakon is a small village located in the Oymyakonsky district in Russia. This place is considered to be one of the most dangerous places because of its extreme climatic condition. The severe temperature makes it impossible for life to sustain in this region. The temperature drops to as low as -40 degrees Celsius (-90 degree Fahrenheit), making it impossible for tourists or travelers to visit the place safely as not many can survive this temperature.

Apart from the heat, people do not visit this place as no vegetables are available and nothing can be grown, so the lack of food is another major issue. Only about 500 people have managed to settle down in this place and survive the bitter cold.

Death Valley is a desert valley on the California and Nevada border with extreme heat. It is known as one of the hottest places across the world. There are only a few deserts in the Middle East and Africa, approaching peak temperatures during the summer which can give competition to the Death Valley. The hottest place on Earth had its hottest month record in July 2018. The average temperature, including overnight lows, was 108.1°F. For four days in a row, the daily highs hit a temperature of 127°F, it’s the highest recorded temperature.

A band of settlers lost here in the winters around 1849-1850 gave Death Valley its forbidden name. While only one person died here, as far as we know, they all thought this valley would be their cemetery. They were saved by two of their young men who had learned to be scouts, William Lewis Manly and John Rogers. As the men climbed over the Panamint Mountains from the valley, one of the men turned and looked back, saying, “goodbye, Death Valley” earning its place in the top dangerous places in the world.

Skeleton Coast is spread across the south of Angola to the north of Namibia. It stretches from the Kunene River (south) to the Swakop River. The skeleton coast ranks in the list of “the deadliest places on earth” because of it’s harsh climate, and it offers almost zero chance of survival. The weather, hot winds, and lack of food, and water makes it difficult for travelers to explore this silent place.

Apart from harsh climatic conditions, the area is filled with bones of numerous animals (bones of whales, elephants, turtles, seals, etc.), giving a sour appearance to the place. Apart from natural conditions, human threats (gang violence and robbery) make it unfit for tourists to explore the place. Undoubtedly, it is among the most dangerous places on Earth.

Suggested Read: 13 Oldest Countries In The World That You Should Visit In 2022

One of the most uninhabited environments in the World is the Danakil Desert in East Africa. With temperatures that regularly exceed 50°C (122°F), volcanoes and geysers that spew toxic gas, the Danakil Desert is not an easily accessible location for travel enthusiasts. Your physical health can take a massive hit even if you stay there for a short period of time. This is amongst the weirdest places across the world.

The most adverse effects occur due to the presence of high concentration of poisoning vapors of sulfur in the region. This region is a volcanically active area and on top of that, to increase the risk, the air temperature in the desert rarely falls below 50 degrees Celsius. Thereby making the Danakil desert one of the most dangerous areas in the world.

Suggested Read: 40 Exotic Honeymoon Destinations In The World All Romantics Must Go To In 2022

The Turkmenistan Darvaza Gas Crater is known as the “Gates of Hell.” It is a natural gas field within an underground cave; Geologists set it on fire to prevent methane gas from spreading, and it has been burning since 1971. It is located in the middle of the Karakum Desert, about 260 kilometers north of Turkmenistan’s capital, near the village of Derweze, Ashgabat.

The gas reserve that has been discovered here is one of the World’s most extensive natural gasses. Locals gave the name “Door to hell” to the area, referring to the explosion, boiling mud, and orange flames in the large crater, 70 meters (230 ft) in diameter. The hot spots spread across an area 60 meters (200ft) long and roughly 20 meters (66 ft) deep. It is among the top 10 dangerous places in the world.

North Sentinel island is situated in the Andaman Islands and is considered one of the most dangerous places in the world for tourists to visit. The native people of this place have been living in their traditional way and have denied all possible ways to connect with the outer world. The tribal people living on this island are not used to outside people and if tourists step foot on their island, they see them as a threat and indulge in acts of violence.

This is amongst the strangest islands on the earth and attracts globetrotters with its tales. Another reason why people are asked not to visit the place because of the safety of the tribal community. They have absolutely no immunity and tourists can carry some disease-causing germs and may spread it to the whole community.

Suggested Read: 10 Best Honeymoon Places In World In 2022 December For A Splendid Experience

Madidi National Park is situated along the Amazon river in Bolivia and has an area of around 19,000 square kilometers. The national park, which is a dense forest, is filled with all kinds of flora and fauna, and some of these plant species are dangerous and not edible. The forest is filled with predators owing which tourists are advised against visiting the park on their own. The forest is one of the largest protected areas of the world because it houses highly dangerous animals, birds, and plants and bags a place in the list of most dangerous places to visit on earth.

Our earth is home to many wild and dangerous places sitting right alongside the famous tourist destinations where we have always wanted to take a trip. We hope this list of the most dangerous places in the world helps you craft your bucket list better. Don’t forget to share this with all your travel buddies as well!

Frequently Asked Questions About The Most Dangerous Places In The World

You’d Wish You Were Born Here Instead….

Encircling The Earth Twice: An Indian Woman On A Solo World Trip

In Pictures: Get Lovestruck With These 35 Most Romantic Hotels In The World