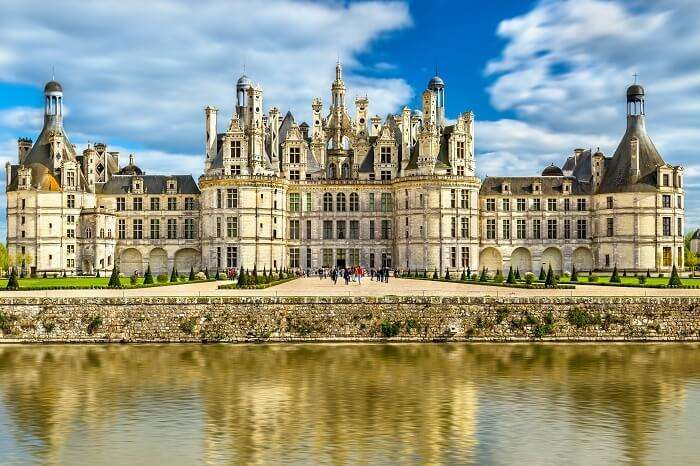 Castles were built as defensive structures against invaders atop a hill or by the waters in the middle ages. They were also a home and a fortress for the Royals. It is believed that the Normans were the ones to have built the first Castles in the world in a motte and bailey style. Castles have been since then revived and rebuilt. Over the years, some castles have crumbled while some stand majestically over a hilltop making them a sight for sore eyes.

11 Magnificent Castles In The World

Narrating tales of glory with some luxurious past, here is the list of the largest Castles in the World which every traveler must visit once in a lifetime. 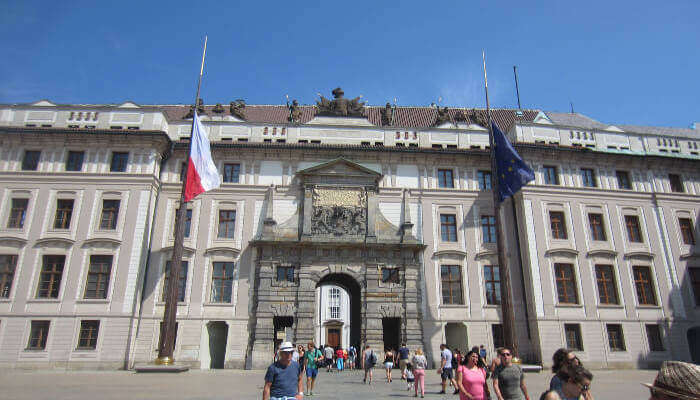 Built in the area of 66,761 square meters, Prague Castle which is one of the biggest castles in the world has a history of over a thousand years. This UNESCO World Heritage Site was built in 880 AD by the Czech Monarchs. It has been declared the largest ancient castle complex in the world by the Guinness Book of World Records. Currently, it serves as an official building for the Heads of the State. Home to the collection of Romanesque, Baroque and Gothic architecture forming the castle complex, this castle is situated on the left bank of the Vltava river. Prague Castle houses a number of historical sites, museums and galleries. The main feature of the Castle is the St. Vitus Cathedral. Many historical artifacts and crown jewels are housed in the Prague Castle.

Must Read: 9 Famous Spots For Scuba Diving In Seychelles In 2022! 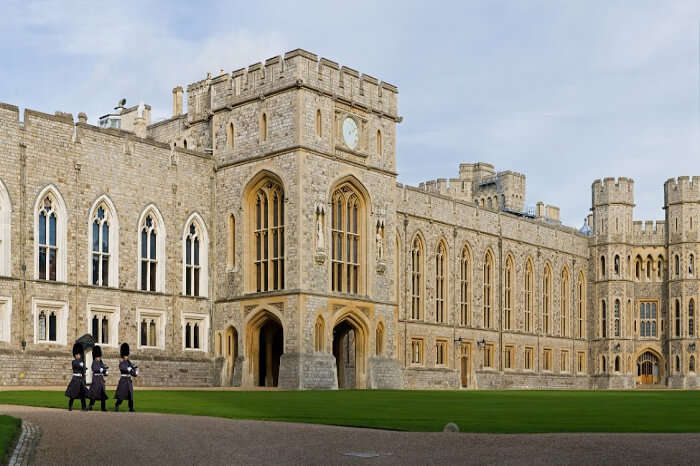 The oldest castle in the world the largest castle in Britain, Windsor Castle is one of the three official residences to the Queen of England. It covers a total land area of 54,835 square meters and serves as an official site for many ceremonial and state affairs. Since its construction in the 1070’s, Windsor Castle has undergone a lot of renovations and redecorations. The main features of the castle are St. George’s Chapel, the dollhouse of Queen Mary and the state apartments.

3. Malbork Castle- A Castle of Bricks 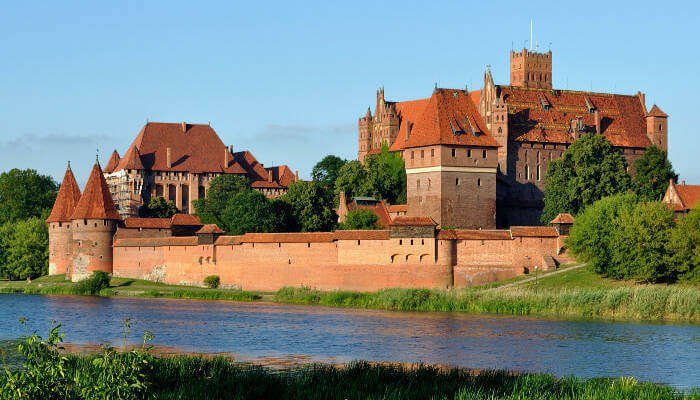 Sprawling over an area of 143,591 square meters, this UNESCO World Heritage Site is considered the largest castle in the world measured by land area. This medieval castle is located in Poland and was built by the Teutonic Knights in the 13th century using bricks unlike other stone castles. It sits on the banks of the Nogat river and is one of the most popular tourist spots in Poland. The main attractions are the monastery, a huge palace and a museum that displays the finest items of Teutonic knights like the weapons and armors.

Suggested Read: 9 Coolest Things To Do In Peru In 2022 For The Adventurous Souls 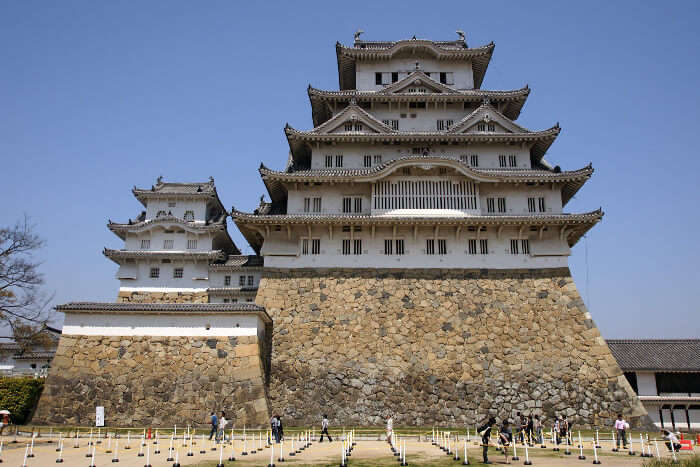 This 17th Century Hilltop castle is a Japanese National Cultural Treasure. Located on top of the hill, Himeyama in Himeji, this UNESCO World Heritage Site is built over 41,468 square meters and consists of 83 buildings made of wood. Himeji Castle is also known as the white heron castle owing to its resemblance to a bird ready to take flight. It is the only castle in japan to survive the civil war and the great earthquake. It is the largest castle in Asia and is undoubtedly one of the best castles in the world.

Suggested Read: 10 Most Charming Places To Visit In Yogyakarta On Your Indonesian Vacation 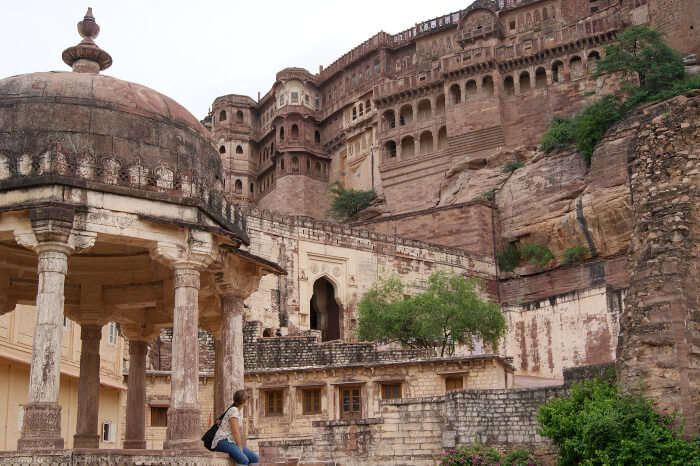 Perched upon a hill at 400 ft, Mehrangarh Fort is the second largest and one of the 10 most beautiful castles in the world. Built in the 14th Century by Rao Jodha, it covers as an area of about 81,227 square meters. This magnificent castle is built with sandstone and is brimming with tales of valor, culture and history. The main attractions include the mirror palace (sheesh mahal), Moti Mahal, Phool Mahal, Chamunda Mataji Temple, courtyards and the museum. The palaces inside have intricate carvings along the walls. The visitors can indulge in some zip lining activity as well. Also, this is one of the largest fortresses in the world! Sounds interesting, right? 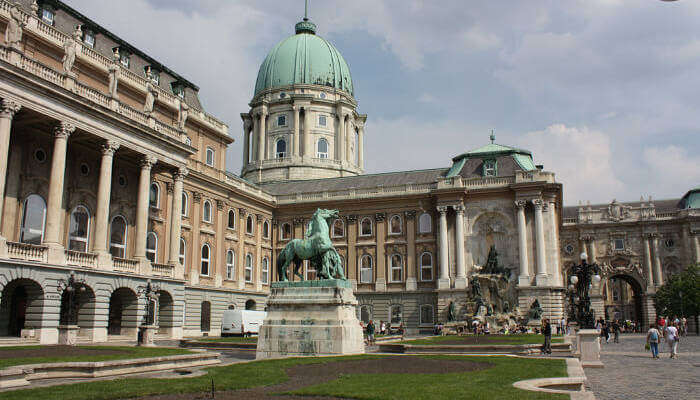 One of the biggest castles in the world, Buda Castle was built in the 13th Century to defend themselves against the Mongol invasion. This UNESCO World Heritage Site is built across an area of 44,674 square meters. It sits on top of the Varhegy Hill giving the visitors a stunning panoramic view of the Danube river, the Chain Bridge and the Pest side of the City. The major sightseeing features of the castle are the Royal Palace, Fisherman’s Bastion, Matthias Church, Faust wine cellar,the labyrinth and the famous National Gallery. The castle hill can be reached by the funicular from the chain bridge or by the varbusz.

Suggested Read: 13 Things To Do In Niagara Falls, Canada In 2022: An Experience Below A Majestic Waterfall

7. Neuschwanstein Castle- An Inspiration for A Disney Movie 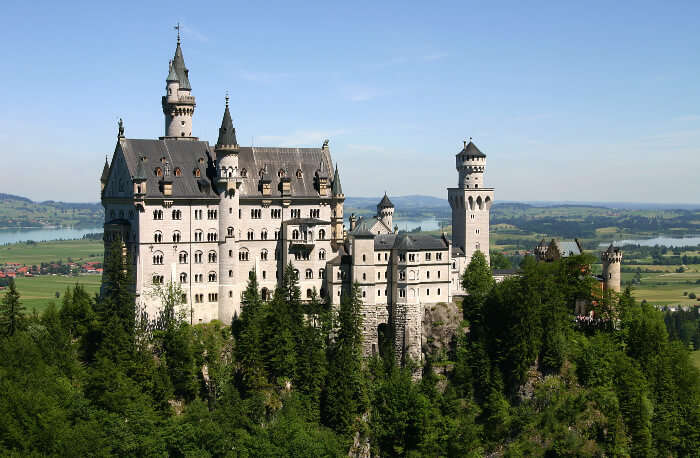 Neuschwanstein Castle is located in Bavaria and is one of the most visited castles in Germany. This fairy-tale castle was built by King Ludwig II in 1886. It was built as a recreational home unlike other castles that were built for defence purposes. It is the most beautiful and one of the biggest castles in the world and has been an inspiration for Disney’s sleeping beauty castle. It is the largest castle in Germany and is built in an area of 65,000 square feet. It is perched on a high hill and its highest tower reaches upto 213 ft. 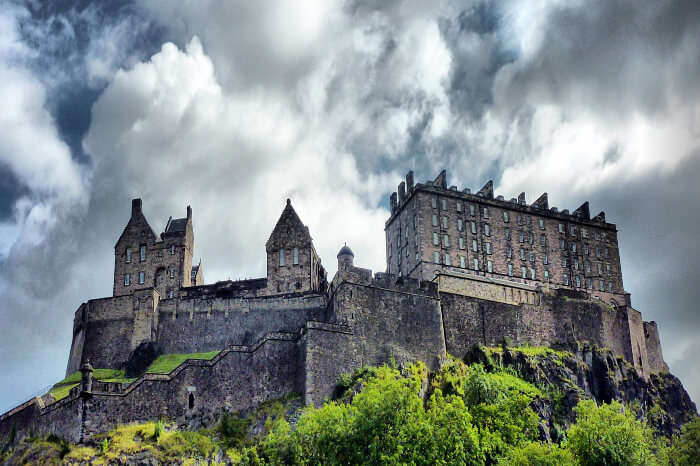 Both as a military stronghold and a Royal residence, Edinburgh Castle has a remarkable Scottish history. The castle is constructed on an extinct volcanic mountain spread across a region of 35,737 square meters with the oldest edifice- St. Margaret’s Chapel being built in the 12th Century. The main attractions are the Chapel, Scottish war memorial, Half moon Battery, Crown jewels of Scotland, the One O’clock gun, the stone of destiny and the National museum. 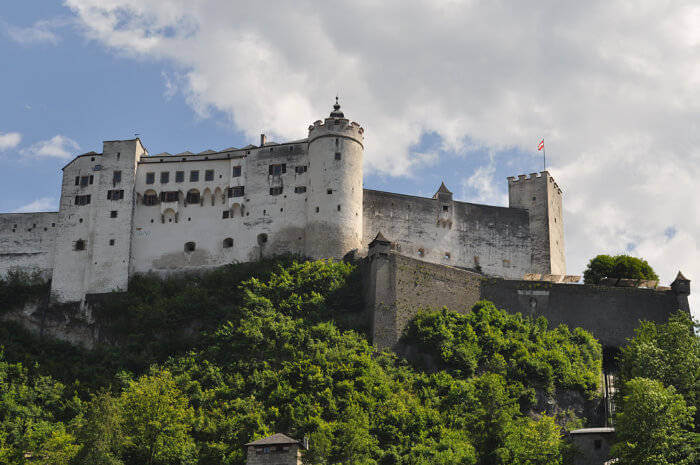 Archbishop Gebhard built this beautiful fortress in the year 1077 AD and since then this citadel is considered the biggest medieval fortress in Central Europe. It is built over a clifftop with an area of 54,523 square meters and gives a spectacular view of the city, Salzburg. A unique feature of this castle is its symbol which is a lion holding a turnip. Presently it functions as a fortress museum that displays medieval weapons, Roman coins, puppetry, and historic musical instruments. It also holds a St.George Chapel within its walls. 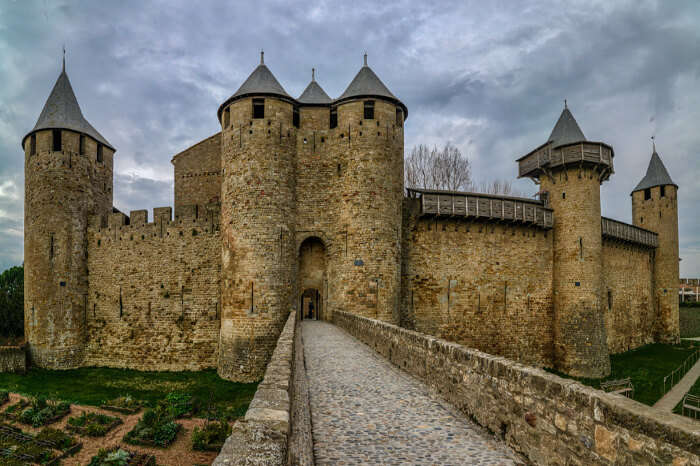 It is an ancient castle that sits on top of a hill in the Southwest of France. It is the longest medieval and one of the biggest castles in the world spreading across 3 kms in distance. Located on the right bank of the river Aude, this UNESCO World Heritage Site has more than 2500 years of history and was restored in the 19th Century by Viollet-le-Duc. It totally consists of 52 massive towers and a double ring of ramparts and its main attraction is the Basilica of St. Nazarius, famous for its Gothic architecture with stained glass panels.

You can’t forget this monument standing firmly over the grounds of eastern Slovakia! It is one of the largest castles in Central Europe and is located in the region called Spis. It was declared as a UNESCO world heritage site in 1993, hence, you cannot miss out on this!

Further Read: Festivals In Iceland: 7 Popular Celebrations On The Land Of Fire And Ice

For a peek into the history and to witness the only survivors of the medieval times, these 11 largest castles in the world are a must visit. To go on a journey to the past along with these magnificent architectures, plan your holiday with TravelTriangle and witness the elegance of these ancient treasures.

Frequently Asked Questions About Castles In The World

Which country has the most castles in the world ?

Wales city has the most castles in the world. Make sure you tour the castles there whenever touring the city with your loved ones.

Which is the largest ancient castle in the world?

Windsor Castle is the largest ancient castle in the world! Not only the largest but also the world's marvelous castle that is admired by most of the visitors.

What was the biggest castle ever built?

This UNESCO World Heritage Site was built in 880 AD by the Czech Monarchs.

Is a palace bigger than a castle?

Castle: a large building or group of buildings fortified against attack with thick walls, battlements, towers, and in many cases a moat. Palace: the official residence of a sovereign, archbishop, bishop, or other exalted person.

What is the oldest castle?

Reichsburg Cochem or Cochem Castle is one of the oldest castles in the world.

What is the most beautiful castle in the world?

How expensive is a castle?

On website, you’ll find more than 1,000 castle listings that range from 250,000 euros to 5 million euros and beyond

Is Buckingham Palace a castle?