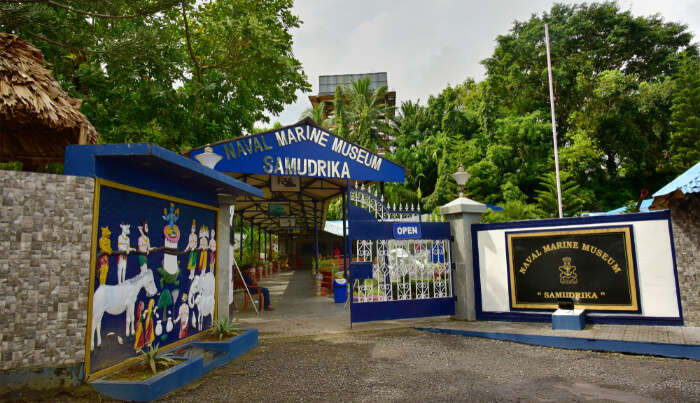 Forming an archipelago in the Bay of Bengal, the beautiful Andaman Island was once a mysterious place and now a popular holiday destination. Located 1370 km east of the Indian mainland and with 572 islands, majorly divided into – Great Andaman, Little Andaman, Ritchie’s Archipelago, East Volcano Islands, and Sentinel Islands, there are a lot of luring temptations that will attract you to this mesmerizing island, from museums and water activities to natural beauty and much more. The destination is ideal for friends, solo travelers, and couples. You’ll find this country’s best museums in Andaman. These museums will provide you with an enthralling experience in a trip down memory lane of this ancient island, with some cultural fix, an introduction to historical characters, wildlife exhibition, science, and technology.

And here is our list of the top 6 museums located on the islands of Andaman that are a must-visit for all history-geeks and culture vultures.

The Anthropological Museum Port Blair Andaman is one of the most visited places in town. The museum encompasses an exhibition which showcases the tools and weapons that were used by the four Negrito ancient tribes of the Andamans, the Jarwas, Sentenalese, Great Andamanese, and the Shompens and the museum also portrait the past and present, life and culture, of various existing and extinct tribes.

Must Read: 13 Thrilling Water Sports In Andaman Which Require No Swimming

Samudrika Naval Marine Museum is located in Port Blair. It is situated right across the Andaman Teal House in Delanipur. The naval museum in Andaman is meant to create awareness about the ocean and marine life of Andaman. The museum is also known as the Fisheries Museum and inside it; you will find some information about the ecosystem, plants and animals, tribal communities and marine life of the island.

The museum has a small aquarium with a various collection of some fishes, coral reefs and shells found on beneath the Andaman Island. And outside the marine museum, you will notice a skeleton of a blue whale that was washed towards the shore on the Nicobars. There is also a mini zoo that shelters crocodiles in Haddo of Andaman Island.

The historical Cellular Jail, also known as kala Paani, was once a colonial prison, used by the British to imprison political prisoners. The prison was used to exile political prisoners to remote islands; some of the most famous freedom fighters who used to be imprisoned here are V.D. Savarkar Batukeshwar Dutt and Yogendra Shukla. Even though parts of the Cellular Jail have been destroyed by the Japanese during World War II, it still stands tall to serve as a national memorial monument to remind us of our brave forefathers.

Suggested Read: Markets In Andaman: 7 Markets That Are A Shopaholic’s Paradise And You Can’ Miss

The Science Centre is the perfect place for getting both grown-ups and kids interested in everything science and technology. It was established in 2003 aiming to explain the science of the oceans and islands of Andaman. The center includes some interactive exhibitions with information about the origin of the islands, volcanic activities, and ocean science. The center also houses a large science gallery and a modern technology gallery. In the Science Center, you can find the youngest stone found in India which is a testimony of the under crust activities that are still being transported around Barren Island.

Suggested Read: 10 Quirky Things To Buy In Andaman You Shouldn’t Return Without

The Zoological Survey of India Museum is also located in Port Blair. The museum houses various specimens of exotic creatures, whales, coral reefs, starfish, and also some skeletons and fossils which were found beneath and above the island. The ZSI museum on the Andaman and Nicobar islands is one of the best destinations to visit with your family.

Suggested Read: Visit Andaman In December To Experience An Adventure Of A Lifetime!

Run by the Forest Department of Andaman Nicobar Islands, the Forest Museum in Andaman displays everything associated with the wildlife, including animals and forests. The galleries display a variety of artifacts made out of satinwood, gurjan, oak, timber, and paduak. It’s a favorite places for all wildlife enthusiasts and nature lovers.

Further Read: Scuba Diving In Andaman: 15 Unexplored Sites To Unravel The Colors Of The Ocean

Since these islands are soaked in history, nature and entertainment you’d find these museums in Andaman to be few of the greatest places to visit in these islands. So now you can spare a day or two to take a trip to Andaman and create the most beautiful memories on the islands of Andaman and Nicobar.

Q. In which country is Port Blair?

A. Port Blair is the Capital of Andaman & Nicobar Islands, India. It is located on the east coast of South Andaman Island.

Q. What is Anthropological Museum?

A. Anthropology is the study of human societies, cultures and their development. Anthropology Museum has things and artefacts related to prehistoric societies, archaeology, customs, languages, traditions and culture. The Anthropological Museum of Andaman is a great example.

A. No, Ross Island is Open on Wednesday. You will however have to leave the island by 4pm. Ross Island may be closed on days of bad weather.

Q. How can I reach Chidiya Tapu from Port Blair?

A. You will have to rent a car or a bike to reach Chidiya Tapu. It is around 30 km from Port Blair.

Q. How do I get from Port Blair to Baratang?

28 Honeymoon Places In Andaman Couples Can’t Afford To Miss In 2021!

10 Water Sports In Havelock That Are Worth Trying

25 Best Beaches In Andaman And Nicobar Islands Water Babies Must Visit In 2021!

Butler Bay Beach: Surf In The Remote Island Of Andaman!

14 Thrilling Water Sports In Andaman That All Adventure Enthusiasts Must Try In 2021!