8 Best National Parks In Karnataka For The Wildlife Enthusiasts To Explore In 2022! 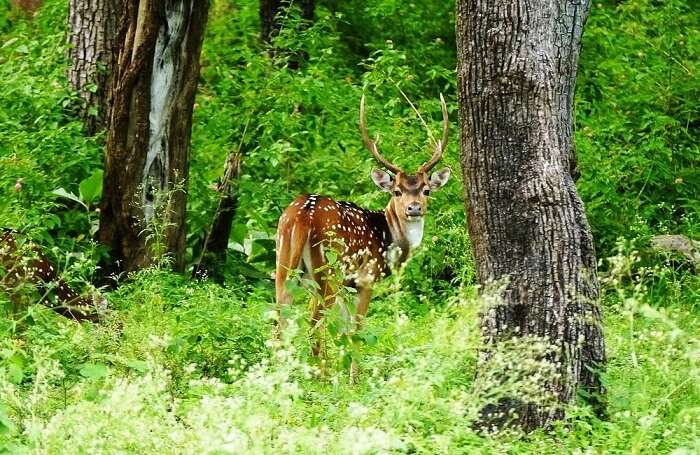 Much famed for its rich diversity of flora and fauna, more than 25 percent of the elephants and 15 percent of tigers in India, can be found in Karnataka. Owing to its fair share of lush greens and thick jungles with ample amount of water resources, Karnataka is home to dense, and breathtaking national parks in Karnataka. They not only draw country’s wildlife enthusiasts but also are a perfect escape for nature lovers and adventure seekers. Check them out!

Here are the 8 best national parks in Karnataka that you must not miss at any cost. Explore all of these with your friends, partner, or family on your next visit:

Situated at a distance of 23 kms from Bangalore City Railway Station, Bannerghatta National Park is one of the most famous national parks in Karnataka. Spread across an area of 25,000 acres, the park consists of the main nature reserve, a zoo, a children’s park, an aquarium, a crocodile park, a museum, a butterfly park, a snake park, and a safari park. One of the main attractions of this park is the Grand Safari. The one-hour long safari provides an opportunity to spot leopards, white tigers, Bengal tigers, and lions. While elephant safari is also offered inside the premises, the park is also famous for bird spotting.

Among all the top national parks of Karnataka, Bandipur National Park is the popular one. It is home to around 70 tigers, and over 3000 Asian elephants, as well as other animals like leopards, dhole, gaur, sloth bears, and a variety of birdlife. Spread across an area of 874 square km, this national park is a part of the famous Nilgiri Biosphere Reserve. The entry point and interpretation center of the park are located in Bandipur village on the highway after Melkamanahalli Village. While private vehicles are not allowed inside the park, private jeep safaris can be arranged via Jungle Lodge & Tuskar Trails.

Suggested Read: 15 Top Hill Stations In Karnataka In 2022 To Rejuvenate Yourself!

Nagarhole National Park is one of the most important national parks in Karnataka. Having received the status of a national park in 1988, it was declared as the 37th Project Tiger Reserve in 1999. It is a part of the Nilgiri Biosphere Reserve wherein wildlife enthusiasts love to visit this place to witness the rich forest cover, small streams, hills, valleys, and waterfalls. Inside the park, one can enjoy coracle boat riding facility on the Kabini River. This national park of Karnataka is home to tigers, leopards, wild dogs, sloth bears, hyenas, deers, sambar deers, four-horned antelopes, wild boars, and elephants while over 250 species of birds can be spotted at the Nagarhole National Park.

Of all the national parks on the list of National Parks in Karnataka, Anshi National Park is the one that serves as a treat to the wildlife lovers. Spread across an area of 340 square kilometers, Anshi National Park was earlier a part of the Dandeli Wildlife Sanctuary. Offering a rich variety of flora and fauna, this park is a home to Bonnet Macaque, Malabar Giant Squirrel, Indian Bison, and sloth bears. Housing over 197 species of birds, this park is also a wonderful place for bird watching.

Suggested Read: 21 Charming Places To Visit In Shimoga For A Serene Holiday Experience In 2022!

While the major chunk of the national park is set in Tamil Nadu, this protected reserve shares its boundaries with the state of Karnataka and Kerala. Located in the northeast region of Nilgiris, Mudumalai National Park is a declared tiger reserve and is one of the famous national parks in Karnataka. Spanning across an area of 321 square kilometers, the park is a home to numerous endangered species like Bengal tigers, long-billed and white-rumped vultures, Indian leopards, and elephants.

Suggested Read: 47 Best Places To Visit In Karnataka That Will Totally Knock You Out In 2022!

Kudremukh National Park is adorned with lush greenery and serenity. If you are up for a thrilling encounter with the wild side of Karnataka then, Kudremukh National Park is one of the best spots for a vacation. The best time to visit this national park is in December and February as you can spot many wild animals during these months and the weather is also pleasant. Surrounded by majestic hills, Kudremukh National Park is one of the best national parks of Karnataka as it is home to various species of animals and birds. You can have spot animals like a wild dog, sloth bear, tiger, leopard, and Malabar giant squirrel. Around 200 species of birds exist in this park and all the birdwatching lovers will have a great time at this park.

Suggested Read: 12 Best Places To Visit In Karnataka In March 2022 For A Fulfilling Vacay

An adventurous vacation spent amidst nature while having a look at the incredible flora and fauna awaits you in Dandeli National Park. Dandeli Wildlife Sanctuary is also one of the best national parks of Karnataka and it attracts a lot of travellers every year. From jungle safari to Coracle Ride and from Natural Jacuzzi to Moonlight Boat Ride, this national park in Karnataka has a lot to offer to all adventure junkies. You can indulge in various enticing activities and also spot flora and fauna. If you want to make the most of your vacation then you should visit Dandeli National Parl from October to May. This national park is home to animals like black panthers, crocodiles, elephants, Indian sloth bears, bird species, and amphibian species.

Kali Tiger Reserve is one of the most famous national parks of Karnataka. Primarily it is a reserve and protected area for tigers. This national park is a habitat of various species of animals like Indian elephants, Bengal tigers, black panthers, leopard cat, Wild dog, jackal, small Indian civet, and Indian gray mongoose. The best months to plan your trip to this park are from October to May. In these months the weather is not hot and you can easily explore this reserve. Kali Tiger Reserve also has reptiles like king cobra, Indian rock python, saw-scaled viper,, spectacled cobra, Russell’s viper, and common krait. You can enjoy activities like Jeep Safari, birdwatching, and boating on your visit to this park.

So, which of these magnificent national parks in Karnataka has enticed you the most? All you need to do now is to plan your trip to Karnataka and get ready to have a meeting with the wild. Let us know in the comments below and tag your buddies along on an adventurous escapade!

How many national parks are there in Karnataka?

There are 5 famous national parks in Karnataka and 21 wildlife sanctuaries.

How many national parks are there in Bangalore?

There are 5 incredible national parks around Bangalore. They are home to rare species of animals and birds, beautiful plants and trees and outstanding natural beauty.

Which are the best hill stations in Karnataka?

What is Bandipur National Park famous for?

The popular Bandipur National Park is s home to around 70 tigers, and over 3000 Asian elephants. It also houses other animals like dhole, gaur, sloth bears, leopards and a variety of birdlife.

How do I get to Nagarhole national park?

Where is Mudumalai National Park situated?

The Mudumalai National Park is situated on the northwestern side of the Nilgiri Hills in Nilgiri District, about 150 kilometres (93 mi) north-west of Coimbatore city in Tamil Nadu. It shares its boundaries with the states of Karnataka and Kerala. The sanctuary is also declared a tiger reserve.

Which is the best time to visit Bandipur National Park?

A paradise for nature lovers and wildlife enthusiasts, Bandipur National Park is best visited between October to March, during the winter season. The weather during this time is perfect to explore the park.

Pets are not allowed in Bannerghatta National Park.

15 Best Places To Visit In Karnataka In Winter In 2022: Take Your Pick!

An Off The Charts Honeymoon To Bangalore, Mysore, And Coorg