Monsoon In Karnataka 2020: Fabulous Experiences That Will Cast A Spell On You! 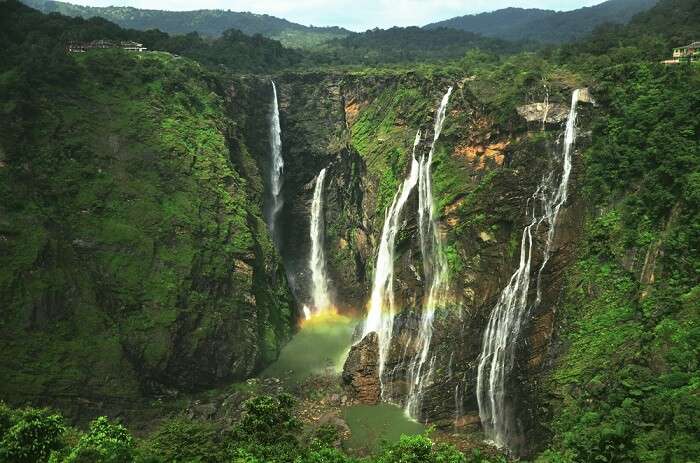 The arrival of monsoon in Karnataka turns it into a magical place. While the Western Ghats display their alluring charm, the coastal regions near the Arabian Sea become all the more picturesque when the first drops of rain hit the ground.

Nature puts up a great show during the monsoon in Karnataka. The plantations of Coorg will flash your eyes with its verdant greenery and striking vistas. The monuments of Hampi and Bidar look spectacular when drenched in the rain. And, the sparkling waterfalls of Agumbe turn into the wild roaring beasts. It would be a huge FOMO if you miss out on witnessing the most dramatic and scenic avatar that nature dons during the monsoons.

Due to the onset of heavy rainfalls, Karnataka weather in July is humid yet pleasant. The coastal regions and southern areas of Karnataka receive a high rainfall during the monsoons. The charm of the Western Ghats increase manifold as the rainforests are painted with fifty shades of greens.

A trip to South India has a lot to offer – from tranquillity of forests to charm of sizzling beaches and from lost kingdoms to chills of a hill station. Visit Kerala, Coorg, Ooty, Mysore, or Kodaikanal. Book holiday packages inclusive of airport transfers, cab, resort, sightseeing, and meals.

Monsoon In Karnataka: Here’s What You Should Do

Although the rains limit the option of sightseeing, there are various other exuberant experiences you can have during monsoon in Karnataka 2020.

Hampi is one of the best places to cherish the monsoon season in Karnataka. All of a sudden, the dry vistas of Hampi turn into green sprawling pastures. The copious temples which dot the scenic landscape of Hampi look breathtaking when drenched in the rains. The pleasant weather makes it easier to hop from one monument to another in the pursuit of spectacular photos. The cloudy sky makes a terrific backdrop for the photos of the temples. Even Coracle boat rides in the might Hampi River and rock climbing becomes all more thrilling.

Suggested Read: 13 Most Riveting Places To Visit In Hampi

A small village on NH 66 in Karnataka, Maravanthe is where the sea and the river jog together. On one side the village is surrounded by the Arabian Sea while the other side is where the Souparnika River flows in tranquility. During the monsoon in Karnataka, Maravanthe becomes one of the most scenic beach roads which is why you ought to take a road trip here. Though the road does not disappear under water, it is as close as you can come to Passage du Gois in France. And, did we tell you how dreamy the sunsets look from this road? You ought to see for yourself.

Agumbe is known for its numerous waterfalls, natural splendor, and rich biodiversity. The high-altitude village in the Shimoga district is also known as ‘Cherrapunji of South’ since it is the highest rainfall place in Karnataka. Its many waterfalls like Onake Abbi, Jogi Gundi Falls, and Barkana Falls transform into thunderous marvels during the monsoon in Karnataka. The other pleasantry this place has to offer is the numerous trekking trails in the lush green rainforests of Agumbe which preserve an abundance of rare and exotic biodiversity.

Suggested Read: You Can Climb The Bua Tong Waterfalls In Thailand And It Is The Most Amazing Feeling Ever!

What once used to be the capital of medieval Deccan in now a popular destination with 98 monuments, all of which are spectacular and unique in their own sense. Settled on a hilltop, the ‘City of Whispering Monuments’ is one of the best places to visit during monsoon in Karnataka. The 500-year old Bidar Fort stands tall in aplomb and has earned the city a prominent place on the Archaeological Map of India. The place got its name from Bidri artwork which is a unique 14th-century craft seen in metalwares. There are many souvenir shops in the city from where you can buy the world-famous Bidri handicrafts.

Just when you think Coorg could not be any more beautiful, wait for the monsoons to arrive. The green coffee plantations unraveling behind the thick foggy mist looks so mystical and dramatic. Sweep the breathtaking panoramas of Madikeri town while it is drenched in the rain from the Raja’s Seat, the highest point in the town. Abbey Falls, which is another famous tourist attraction in Coorg, becomes a fairyland in the monsoons. Not even the monsoon in Karnataka are able to stop bikers and travelers to come to Coorg to enjoy a hot cuppa fresh coffee. Simply put, this is one of the most amazing monsoon destinations in Karnataka.

Suggested Read: Coorg In Monsoon: Witness The Best Of Greens At This Paradise Of South India!

If you are a wildlife enthusiast, the forests of Dandeli are one of the excellent places to savor the exotic flora and fauna during monsoon in Karnataka. The second largest wildlife sanctuary of Karnataka is the habitat to many reptiles, birds, and wild animals which come out in the open in this season. Spotting a black panther, leopard, or an elephant is a common site here. The white-water rafting activity in the Kali River lures thrill-seekers and adventurists to get some adrenaline boost. Beware of the man-eating crocodiles who lurk in the deep waters of the river. Spend a night at the resort in the park to experience the wilderness at its best.

Monsoon in Karnataka limits the option of sightseeing. But spending a rejuvenating weekend in a luxury resort seems like a brilliant option. Silent Shores Resorts & Spa in Mysore offers an enchanting vacay experience amidst nature. You will fall in love with this heavenly abode for its top-class hospitality and mesmerizing views of the surrounding hills. While it is raining outside, you can pamper yourself with Balinese, Swedish, and Ayurvedic Spa treatments.

Suggested Read: Consider These 5 Best Resorts In Mysore If You’re Looking For That Perfect Weekend Retreat!

Nandi Hills and monsoons are made for each other. It is because of the spellbinding vistas and breathtaking sunsets and sunrise, Nandi Hills was once the retreat of Tipu Sultan and the Britishers. As soon as the monsoon in Karnataka arrives, the bikers ride on their metal beasts all the way up to the hills to enjoy the splendor of nature. A copious amount of attractions in Nandi Hills and its close proximity to Bangalore has made it popular among Bangaloreans and the tourists.

Rise above the clouds while you stand at the pinnacle of Skandagiri Hills. And, guess what? Karnataka weather in August poses great views and experiences to go on this trek. The cotton candy clouds look so ethereal that you would want to jump on them but dare not. The winsome views of the sunrise you get from Skandagiri are unparalleled. Having a bonfire in the night and camping under the marvels of the sky make it is an experience worth having.

Suggested Read: 10 Best Places To Visit Near Bangalore In Summer To Escape The Blazing Sun

A hippie’s paradise, Gokarna in Karnataka is known for its scenic beaches and virgin landscapes. With rocky mountains on one side and the Arabian Sea on other, this religious town offers you the most picturesque landscapes. All the five beaches are adjacent to one another and are known for their exquisite charm. However, be careful as the tides are high during the monsoon weather in Karnataka in July. So, you should rather enjoy the views of the ocean from the shack sipping beers than swimming in the sea.

This is one of the most-visited places in Karnataka during the monsoons. You get to witness the magnificence of various animals, including reptiles, birds, elephants, and even Black Panther. Observing the flora in full bloom and various animals will make for one of the best experiences you can undergo in the monsoons of Karnataka. Make the most of it by visiting this place with your friends or family.

Further Read: 8 Haunted Places In Karnataka: Are You Ready To Challenge Your Soul?

Traveling in the monsoons can be a bit of a hassle but it is all worth it for the tremendous views and experiences that Karnataka offers. Do not refrain yourself from planning a holiday in Karnataka for monsoons can be a wonderful time to explore the coastal beauty and charming hills.

Q. Which is the highest rainfall in Karnataka?

A. Amagaon in Uttara Kannada District has experienced more than 10000mm rainfall two times within 10 years.

A. There are a number of places in Karnataka that receive significantly heavy rainfall. Places like Agumbe and Hulikal, located in Shimoga District; Talakaveri in Madikeri district; and Amagaon in Uttara Kannada District are considered to receive the heaviest rainfall in Karnataka.

5 Hotels Near Madikeri You Should Consider Staying At