Orang National Park 2021: Your Absolute Guide To The Mini Kaziranga Of Assam! 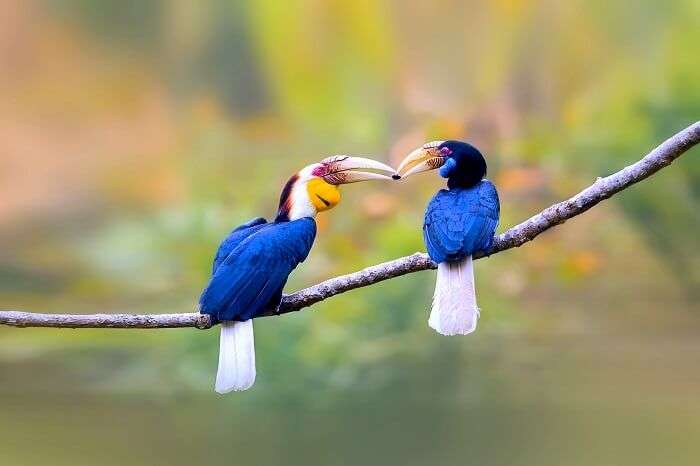 Resting at the north bank of the river Brahmaputra, the Orang National Park is commonly known as the “Mini Kaziranga” for its resemblance with the landscape of the Kaziranga National Park. Settled at a distance of 140 kms from the Guwahati city, this national park is adorned with the scenic beauty of nature which is reflected by the varied range of flora and fauna.

To witness the undaunted beauty of this park and to get up and close with the endangered species, a large number of tourists visit Orang national park annually.

Image Source
It is said that once this park was inhabited by the Orang tribe who deserted the forest area and later it was turned into a game reserve until 1999. This swampy grassland has 26 man-made lakes inside its boundaries, of which, few have dried up and some still conserve rainwater that serve as a home for the migratory birds.

Also called the Rajiv Gandhi National Park, this natural reserve has many things to offer to its visitors, and its a place one must visit once in a lifetime. So, before you head to the Orang National Park in Assam, scroll down to know everything about this place and relish its essence on a stress-free holiday. After it became 49th tiger reserve in India under Project Tiger, it is called Orang Tiger Reserve.

Must Read: 15 Best Tea Estates In Assam That Are A Must-Visit For All The Chai Lovers!

Among the oldest jewels of the North Eastern part of this country is the Orang National Park. This Park is famed for breeding a variety of fishes. Sitting in Darran and Sonitpur of Assam, this National Park was established back in the year 1985 and was considered as a National Park since April 13th in 1999. The similarity of its landscapes with Kaziranga National Park has led to the Reserve adapting the name ‘mini Kaziranga National Park’. The one-horned rhinos can be found here or in Kaziranga and hence, the Park has slowly emerged as a popular choice amidst many.

Suggested Read: River Rafting In Assam 2021: A Thrilling Experience In The Heart of Brahmaputra

Here are a few facts that help one get an understanding about the National Park. These facts will help you get an  idea about what to expect, when to go, and other questions that might pop up in your head!

Suggested Read: 5 Picnic Spots Near Guwahati That Encompass The Beauty And Charm Of Assam!

Orang National Park is home to some of the most magnificent species of wildlife that leave one in awe. Here is a list of various species of plants and animals that one can observe in this National Park.

Suggested Read: 32 Tourist Places In Assam 2021: Unveiling The Hidden Charm Of The North-East

Orang National Park is surrounded by some of the most interesting places that one can visit. Check out the list mentioned below and do not forget to mark your favorites!

Built in the era of 9th or 10th century, this archeological site is situated in the Kamrup district of Assam. The place has preserved the excavated ruins like idols of the Pala dynasty of Kamarupa. The essence of spirituality that is spread all around is something that attracts devotess from various corners of the country. This spot is also a great architectural marvel that is worth witnessing!

Suggested Read: 6 Wildlife Sanctuaries In Assam For Spending A Day With The Nature

Often called out as the ‘Silk Haven’, this village situated at 30 kms from Guwahati has mastered the art of producing the most beautiful silk sarees. This 17th century village is a home to silk weavers and the sight of the people weaving these beautiful fabrics is a treat to the eyes. For those who enjoy a vacation where they can get an insight into the cultures, this place is perfect to take a trip to.

Suggested Read: 5 Best National Parks In Assam: Why It’s The Favourite Of All Wildlife Enthusiasts

Settled at the foothills of the Eastern Himalayas in the Sonitpur District of Assam. Just 40 kms from Tezpur, this is the third largest national park in the state and a must visit while near Orang National Park. This Park is a great escape for those who wish to witness the entire and true side of the wilderness that covers the floors of Assam. The lush greens and the animal species leave one in awe here.

Suggested Read: 5 Popular Waterfalls In Assam That Glorify The Beauty Of The State

Suggested Read: 10 Beautiful Hill Stations In Assam One Must Visit To Rejuvenate The Senses In 2021!

Top 4 Things To Do In Orang National Park

There is plenty to do in this National Park. Orang ensures that you get to enjoy the best of time here, witness the wild side of North East, and gather some cherishable memories.

A visit to the national park is incomplete without taking a safari ride amidst the swampy grasslands of Assam. The Orang national park is the home to many different endangered species. Apart from the one-horned rhino, it is easy to spot an elephant and tiger in this national park and other animals like an Indian hog deer, wild boar, and varieties of snakes.

The national park shelters around 200 bird species which can be easily spotted while taking a safari ride amidst the jungle. Some of the most commonly spotted birds are heron, Bengal florican, pelican, kingfisher, golden eagle and many more.

Suggested Read: 7 Temples In Assam For A Spiritual Awakening In The Northeast

Another fascinating thing which cannot be missed when in Orang national park, is the elephant ride which is organised by the forest department which is one of the best way to indulge into the wilderness of the wildlife reserve.

Explore the park in a little different way by taking a cruise ride on the Brahmaputra river which flows from one end of the park to another. This cruise service started by the Assam Bengal Navigation Luxury Cruise, this initiative has become an instant boost among the tourists.

Suggested Read: 8 Godly Places To Visit In Guwahati In May On Your Assam Trip In 2021

If you wish to stay in the proximity of the Orang National Park, we have the perfect places for you mentioned below. Check them out!

Giving a comfort and luxury hand in hand, the KRC Palace gives an experience of home away from home. This luxurious hotel keeps you close to the Orang National Park and makes a great place to stay close to the national park.

Settled at the cultural hub of Assam, the well-equipped rooms and luxury interiors ensures a comfortable stay in the silence of the lush greenery. Amidst the tea gardens of Tezpur and the rustic touch at its every corner, this Orang National Park accommodation will take give you a perfect relaxing vacation.

Suggested Read: 6 Places To Visit In Assam In May 2021 To Keep Your Senses Captivated

How To Reach Orang National Park

By Air: The nearest airport is Tezpur which is located at a distance of 60 kms from the Rajiv Gandhi National Park. From the airport there are buses and cabs which connects to the national park.

By Train: There are buses which runs to and fro from the city and connects the national park to the other towns. It is one of the easiest and convenient option for the travelers.

By Road: From the Orang national park, the Saloni railhead is the nearest which is located at a distance of 55 kms. Taxis are available from the railway station to reach the national park. The distance from Guwahati to Orang National Park is 109 km and takes about a 2-hour drive to reach.

Further Read: 5 Best National Parks In Assam: Why It’s The Favourite Of All Wildlife Enthusiasts

While planning your next vacation, check out some of the best Assam tours available by TravelTriangle and make your holiday worthwhile. Do not forget to add the rustic surroundings of Orang National Park to experience an adventurous vacation amidst the wildlife!

A. The Orang National Park is famous for its population of One horned Rhinos and tigers. At times it is referred to as mini Kaziranga.

Q. What are the animals found in Orang National Park?

A. Orang national park has a rich collection of flora and fauna. Some of the animals found there include tigers, rhinos, wild boar, civet, porcupine and gangetic dolphins.

Q. Which is the smallest national park in Assam?

Q. How many national parks are there in Assam?

A. Assam has a total of five national Parks.

A. The Orang National Park is located on the northern bank of the Brahmaputra River in the Darrang and Sonitpur districts of Assam.

Dubai Wildlife: Top 6 Places To Befriend The Exotic Wild In This Emirate!

7 Temples In Assam For A Spiritual Awakening In The Northeast